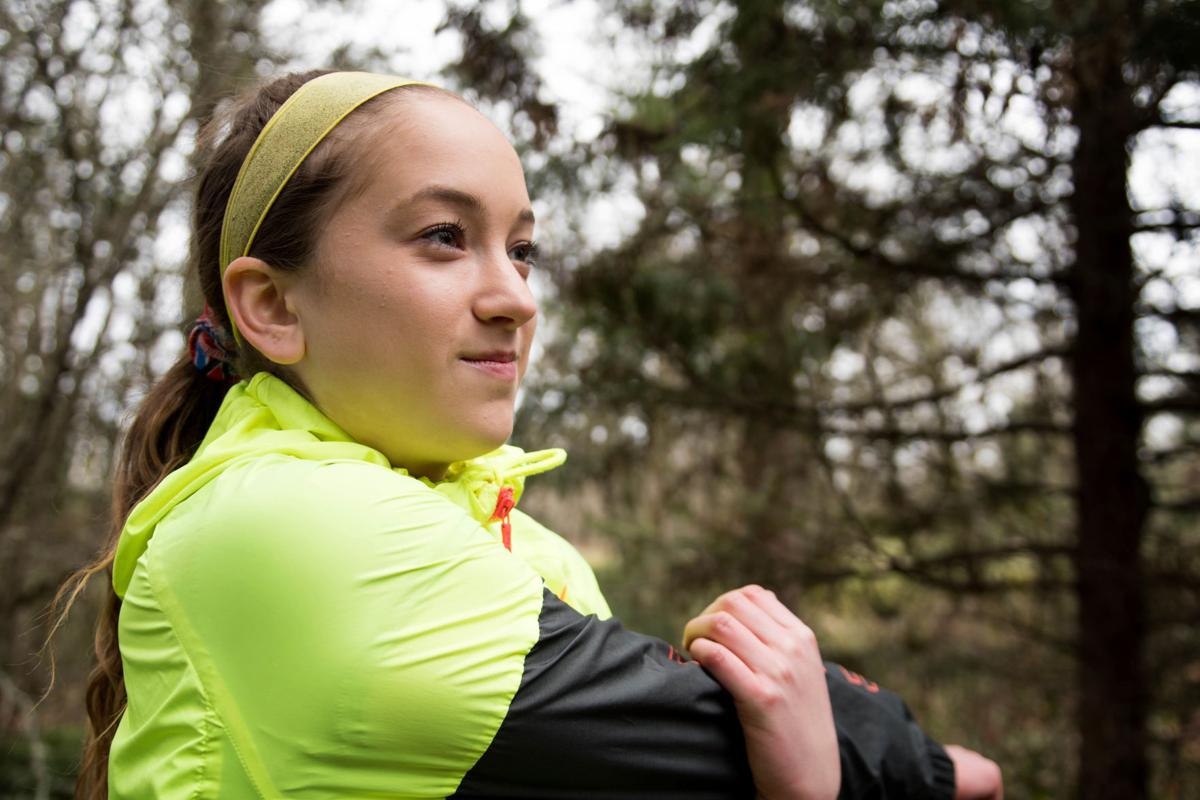 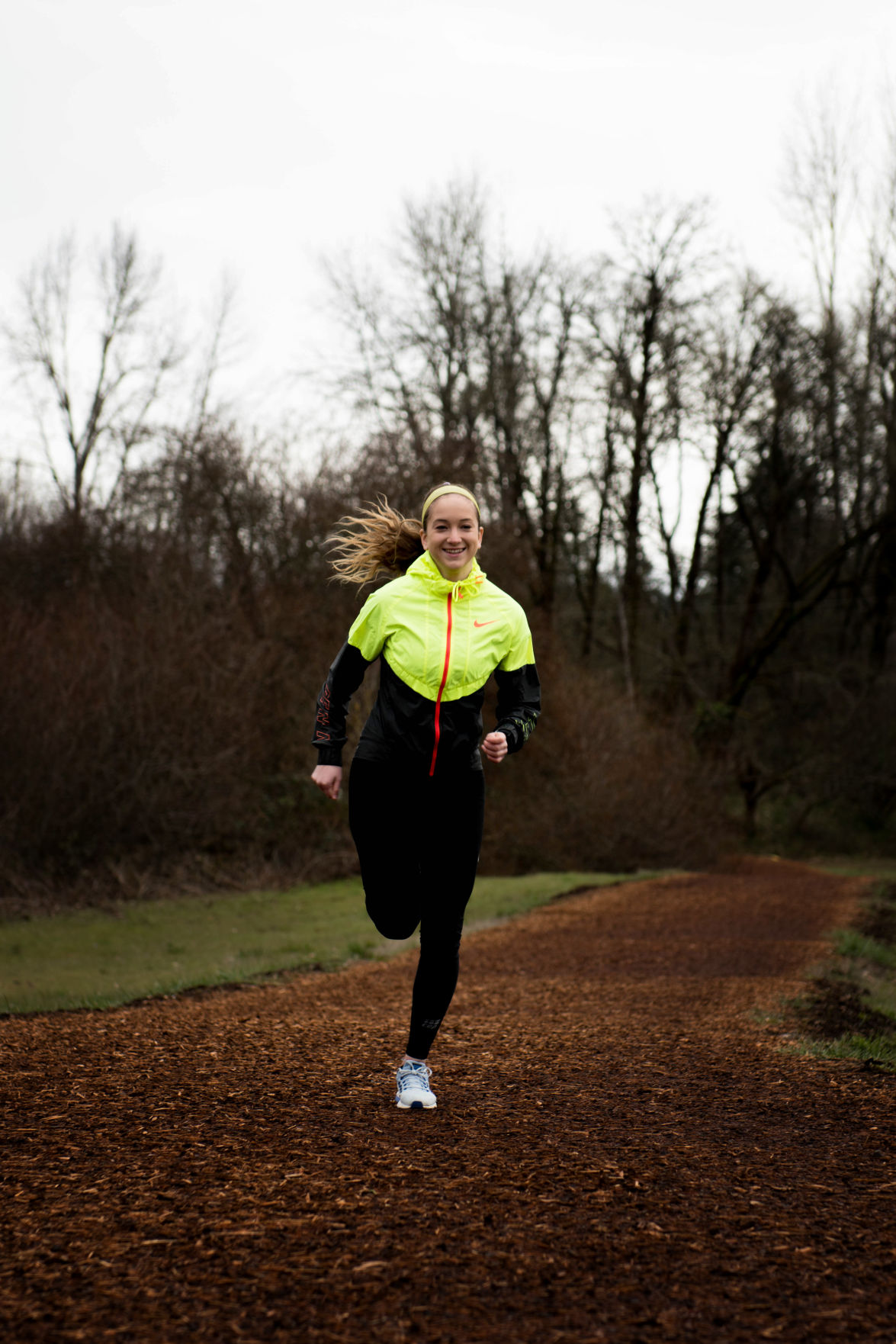 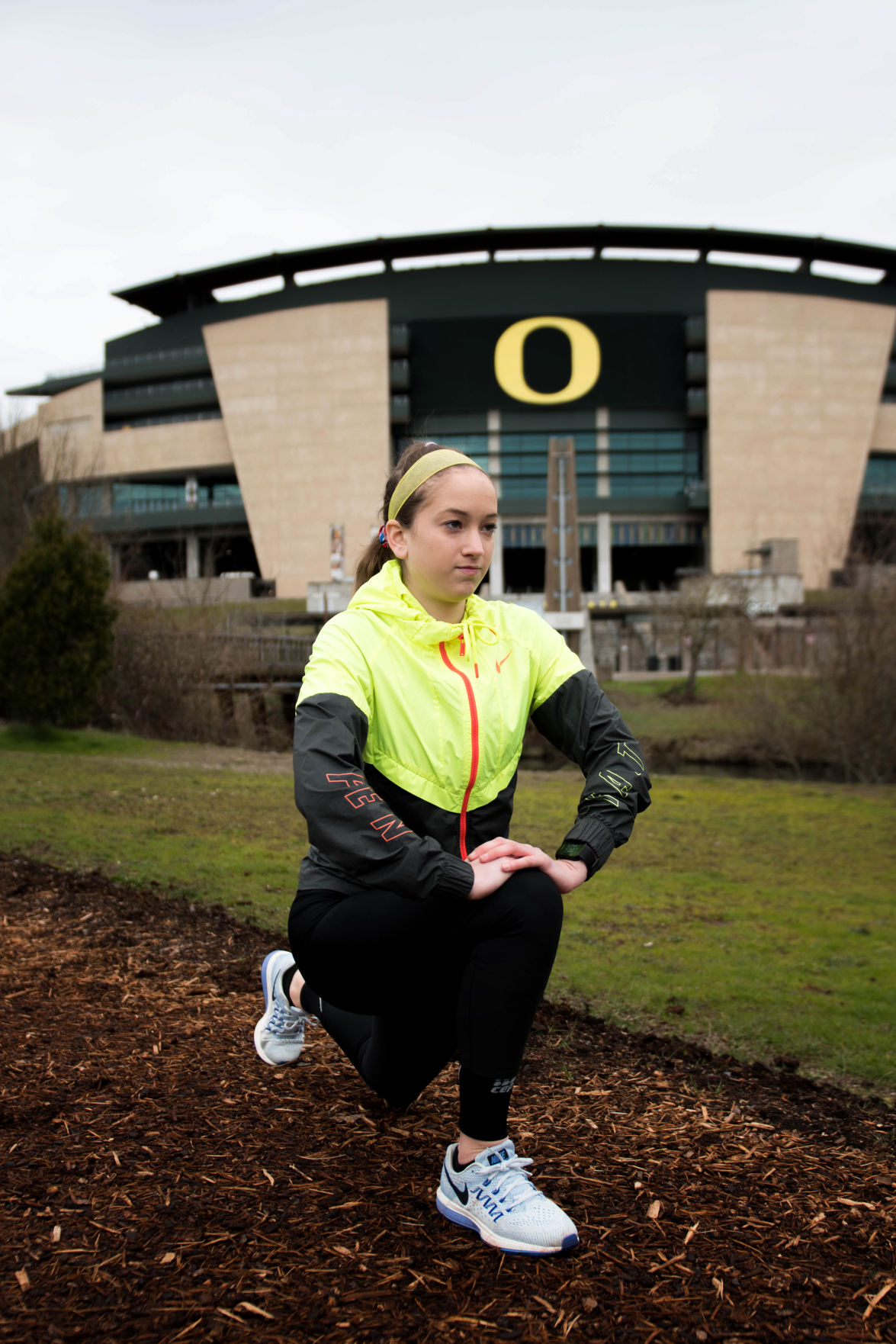 As Kate Murphy ran along Pre’s Trail for a photoshoot with the Emerald, she stopped and took off her winter coat. Underneath, she was dressed for the occasion.

“I wore my Penn Relays jacket for this,” Murphy said while stroking the right sleeve that reads “Penn.”

At the shoot, she couldn’t contain her smile. The jacket from the Penn Relays is one of the few items connecting her to her running past. It’s a momento from a successful young career with Penn Relays glory and a spot in the 2016 USATF Olympic Trials.

She never had a photoshoot as a member of the Oregon track and field team. She never raced in an Oregon uniform. She never will.

In October 2018, Murphy medically retired from Oregon because of popliteal artery entrapment syndrome, a rare vascular disease affecting the main artery that runs behind the knee.

But Murphy, now a UO sophomore, is running again, trying to get her career back on track.

Murphy was a top runner in the nation during high school. She was just a junior when she qualified for the 2016 Olympic Trials, where she ran 4 minutes, 14.52 seconds in the 1,500-meter semifinal, and she won the Adidas Dream in the women’s 1,500 meters with a time of 4:07.21 time to qualify for the Trials. Everything appeared to be going right, but something was wrong.

In the fall, she began to feel symptoms. Eventually her legs felt like “bricks.” She visited a variety of doctors, ranging from vascular to endocrine, but they couldn’t figure out what was causing the pain. When she extended her foot, the blood flow wouldn’t go beyond her knees.

“My feet would either be numb or ghostly white, or they’d be burning. ... It wasn’t just running but I think running made it worse,” she said. “It was like tingling, pins and needles. It was like electric shocks up my legs. It compressed the nerves, the arteries and the blood vessels, so it was just like everything. It was so uncomfortable to run too. I had to stop.”

Murphy was diagnosed the summer before she arrived in Oregon.

“I was immediately like, ‘OK, when’s the surgery?” she said. She wanted to get back to running as soon as possible.

After the surgeries, Murphy missed the fall and winter seasons with rehab. She began working with Oregon’s distance athletic trainer, Grant Wilson, who helped her through the hard times.

“He was one of the main reasons I was like, ‘No, I’ve got to tough this out,’” Murphy said. “I think during that time when I was really struggling, I just needed somebody to push me along and encourage me so I could get back.”

Murphy was fighting. Even with Wilson’s encouragement and rehab, she wasn’t making progress quickly enough.

She watched on as her friends and teammates competed. She couldn't travel with the team for meets. That was tough for Murphy.

Nearly 3,000 miles away in Virginia, her father, Howard, didn’t know how much she was struggling.

“She kept telling us she was going to race but we didn’t know,” he said. “Maybe she felt like she was letting us down. That’s just her perception of it. Our perception of it, of course — you’ve got to get healthy. We don’t put any pressure on her.”

For Murphy, she just wanted to protect them.

Fast forward to April and Murphy still wasn’t competing, and then she felt a pain in her thigh.

It was a stress reaction in her femur from a variety of sources: increasing mileage too quickly, lack of stability in her knee because of the surgeries and not being in shape.

That ended any possibility of her competing in the outdoor season. Six months later, she medically retired.

“It was kind of quick for us as parents because she’s so optimistic,” Howard said. “In reality, she wasn’t telling us the whole story. I knew she was considering [medically retiring] but teenagers don’t always tell you the whole story, so it came up on us. But now we’re acclimating to the whole idea of it.”

“It was us mourning the NCAA career,” Howard said. “We had plans to come to some of the events. We had airplane reservations. We had it all set up to go. Our expectations were following what she was telling us. Her real belief was that she was going to be running. She kept hitting these walls where she got injured.”

Now, Murphy is slowly returning, running 15 to 20 miles a week with 5 to 7 hours of cross-training. Her goal is to be at 30 to 40 miles by the summer to get back to competing.

In the back of her mind, making the 2020 Olympic Trials is not out of the question. The Trials, which will be held in Eugene, would require a qualifying process — something she had to do in 2016 as a high schooler.

“It’s a year-and-a-half away, and I could make it again if I wanted to,” Murphy said. “If I want to aim for that goal, I just really have to focus.”

Throughout her experience dealing with injury, she has reached out to many online to share her story and hear stories from others.

“She has a lot of friends all over the country, all over the world actually,” Howard said. “She has an amazing set of people who keep up with her.”

Going under the username “trackmurphy,” the 19-year-old has more than 9,500 followers on Instagram, while her Twitter (@trackmurph) has more than 3,000.

Murphy’s posts following her injury became inspirational. In her Twitter bio, she has Nike’s “No Excuses” commercial with the punchline, “My feet hurt.” Her Instagram posts have lengthy and emotional captions.

Murphy gets messages from supporters; whether they are fans or runners themselves, she tells her story for others.

“It does make me really happy that people reach out to me because it does make a difference, I think,” Murphy said. “I started realizing I’m going to show people that it’s not all pretty. There’s going to be so many more bad days than good days. It’s gonna be hard.”