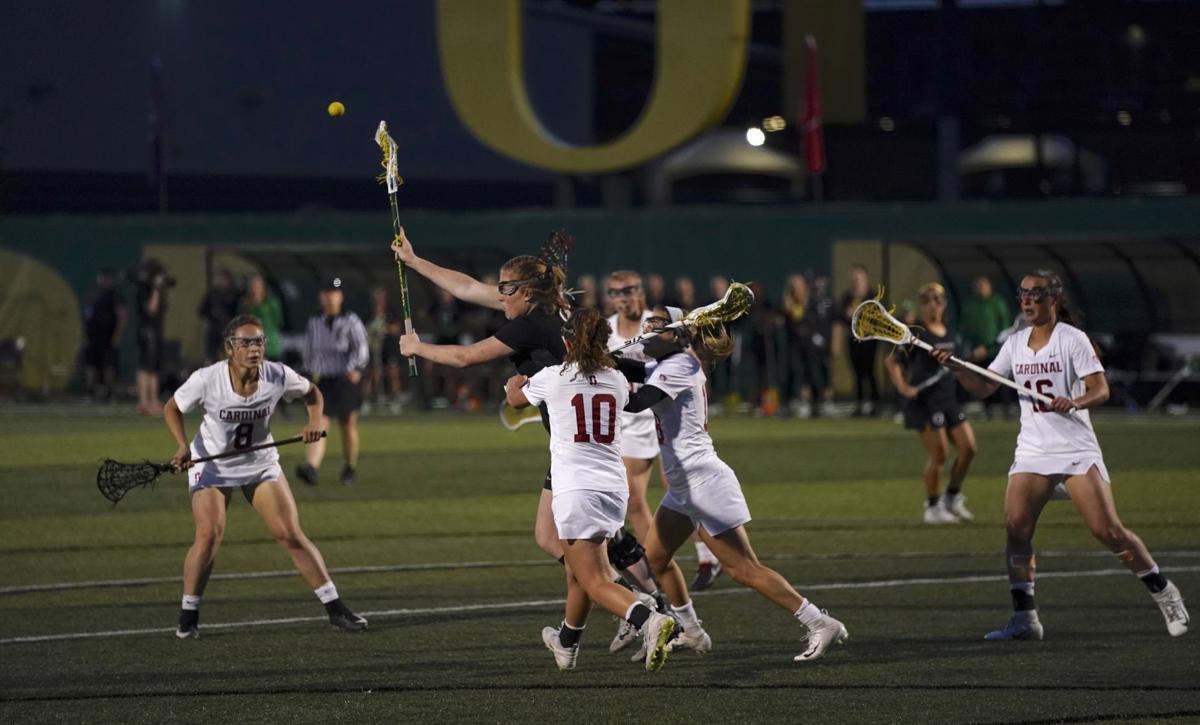 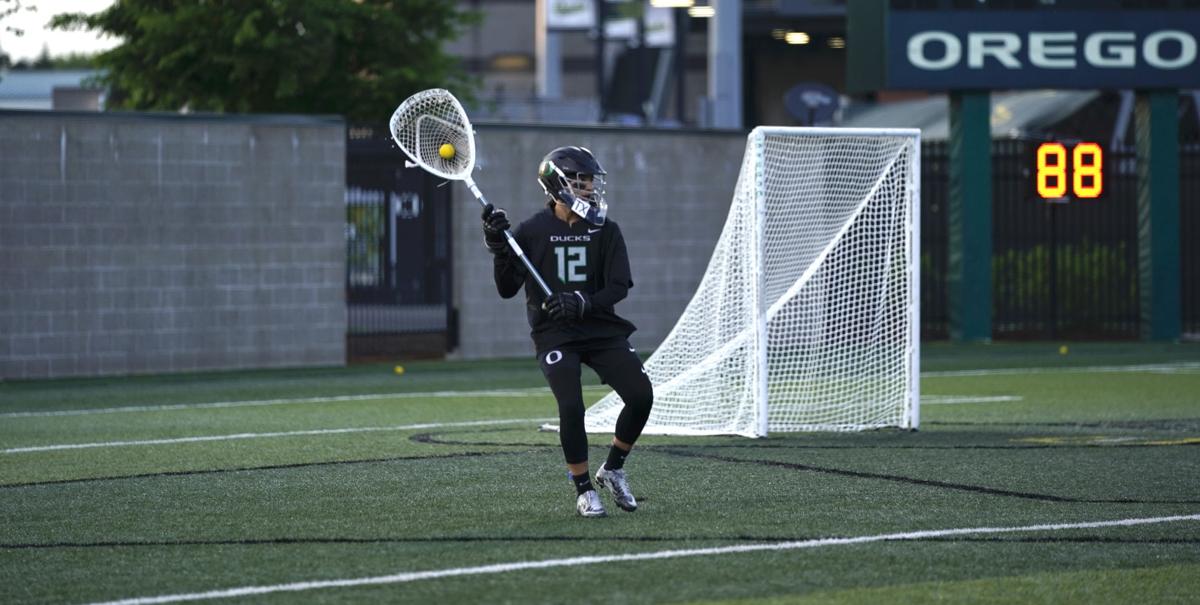 Oregon lacrosse goalie Rachel Hall passes the ball up the field against Stanford in the Pac-12 Tournament first round at Papé Field on Thursday, April 25, 2019. (Benjamin Green/Emerald)

It wasn’t the season that first year head coach Chelsea Gamble had in mind.

The Oregon lacrosse head coach paced down the sidelines, squatted in front of the bench and called out instructions as the Ducks were beaten by Stanford, the team Gamble was an assistant coach at prior to her move to Eugene. The No. 6-seeded Ducks’ season comes to an end with a 3-15 record after a 17-6 loss to the No. 3-seeded and 20th-ranked Cardinal at Papé Field in the first round of the Pac-12 Tournament.

“Just looking into next year, we’re getting a good recruiting class in and we’ll see if we can get a higher seed than six next year,” freshman goalie Rachel Hall said.

Oregon sustained Stanford’s pressure early and it paid off. The Ducks broke the deadlock after a power play goal by sophomore Lillian Stump from a free position gave Oregon the only lead it had all game.

Stump scored a second goalfor Oregon to make it 8-3 Stanford with 1 minute, 39 seconds left in the first half before the Cardinal scored twice more to go into the intermission with a 10-3 lead before completing a hat trick with just over 15 minutes left in the game.

“I think every goal is memorable because of celebrating with my teammates,” Stump said. “I give credit to them.”

Stanford piled on the pressure, and the goals, in what was a physical game. Checks were applied by each team in transition, causing turnovers that mainly cost the Ducks. Oregon turned the ball over 25 times while just causing six.

“We knew coming into this we needed to limit our turnovers so a little disappointed we weren’t able to do that,” Gamble said. "They take advantage of every error we make, that’s what good teams do.”

The Stanford speed was overpowering for Oregon to deal with. The pace of play was most evident on fast breaks, which the Cardinal took plenty advantage of with goals on each side of halftime. But the quick passing in the attacking area around Oregon’s goal caught the Ducks’ defense out and allowed Stanford to beat Hall from close range.

“I think we all hustled really well and gave everything we had until the end,” Stump said.

Despite the loss, Hall was a bright spot for Oregon against Stanford, as she had been all season long, recording 246 saves, including 21 on Thursday on 38 shots on goal. The 21 saves is a school single-game record.

Hall kept Oregon in the game early, making a pair of saves in quick succession following a free position. Eventually, the Cardinal’s firepower was too much for the rookie but she didn’t shy away from making an ambitious attacking play, darting into the field with the ball after a save until she was chopped down for a foul at the halfway line.

“She did her job,” Gamble said. “I just wish we could have complimented her a little more as a team.”

Stanford will take on No. 2 Colorado on Friday for a spot in the second ever Pac-12 Women’s Lacrosse Tournament final on Sunday against the winner of No. 4 Cal and No. 1 USC, while the Ducks will be watching from the stands of their home stadium.