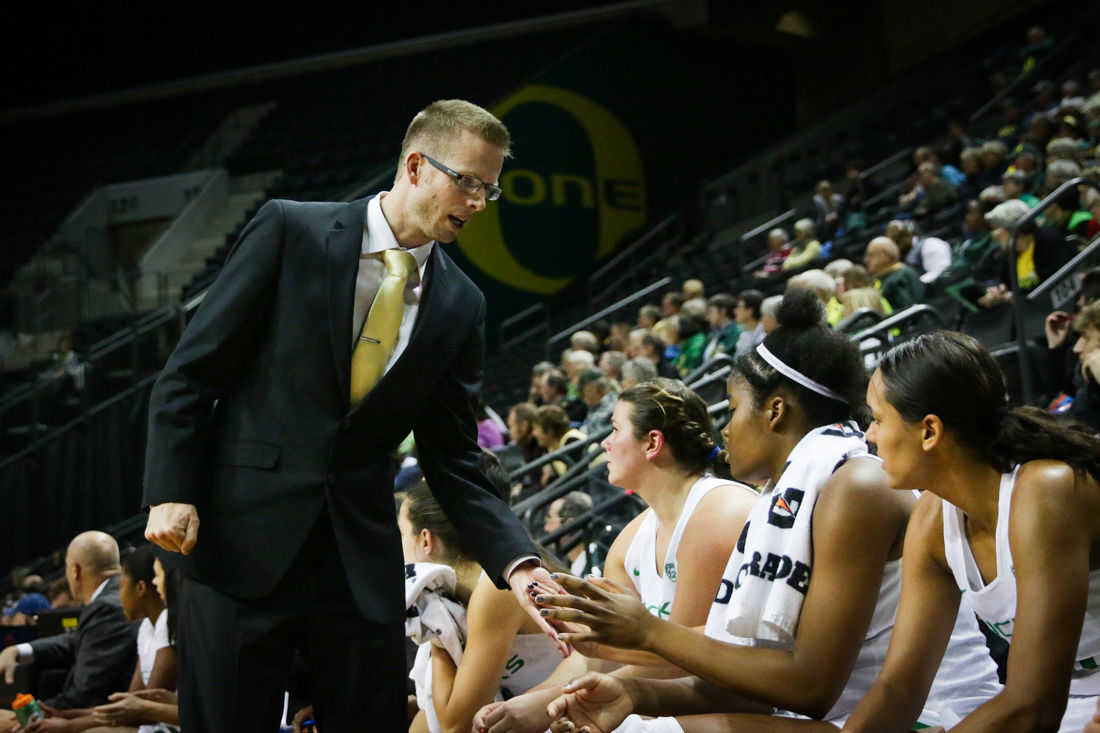 Each time Oregon associate head coach Mark Campbell leaves Eugene to recruit, he is sure to pack a pair of NIKEiD shoes, which have his two daughters’ names —Maley and Makay — embroidered on the tongue. The lettering is understated, but his shoes connect him to the biggest things in … 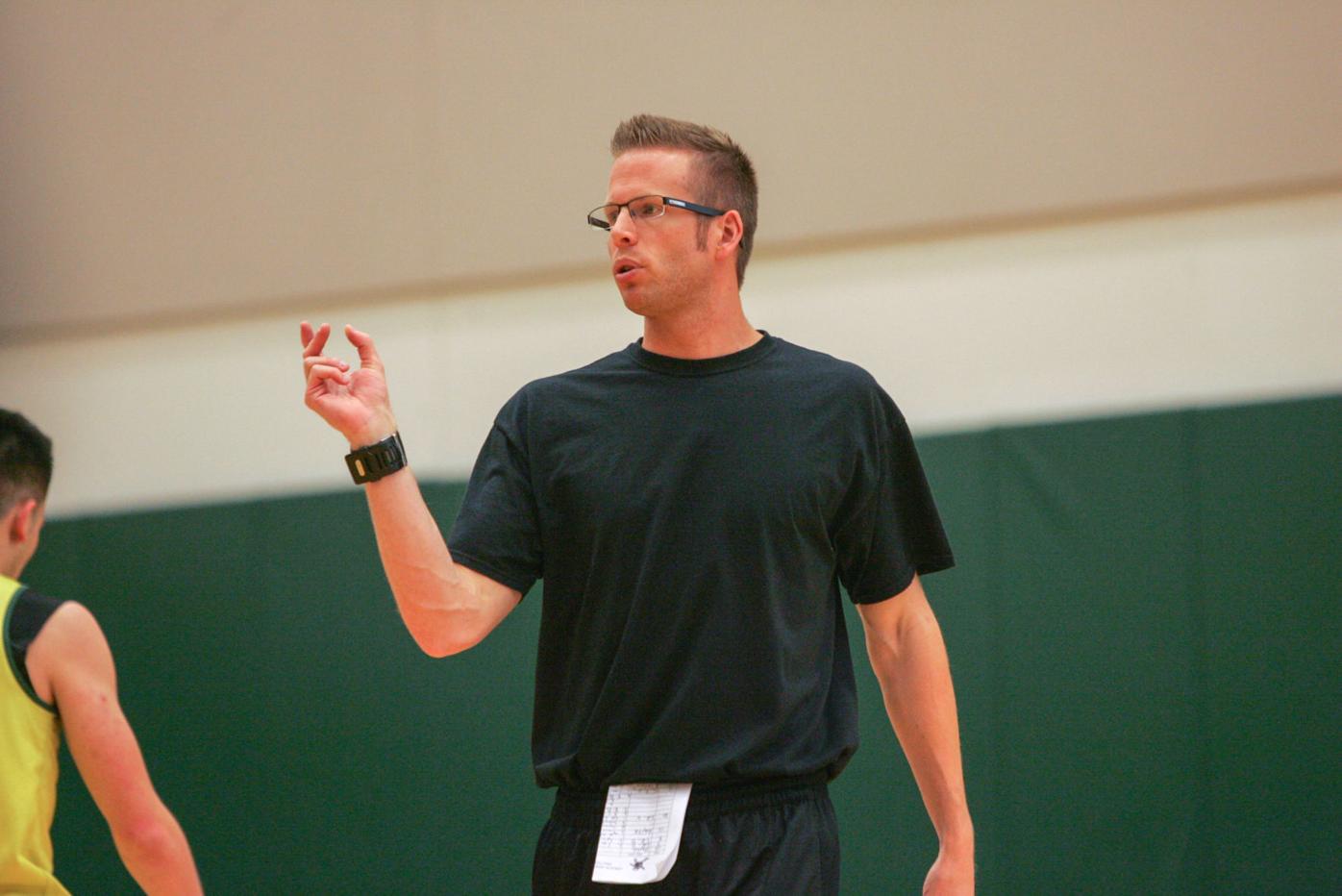 Each time Oregon associate head coach Mark Campbell leaves Eugene to recruit, he is sure to pack a pair of NIKEiD shoes, which have his two daughters’ names —Maley and Makay — embroidered on the tongue. The lettering is understated, but his shoes connect him to the biggest things in …

Each time Oregon associate head coach Mark Campbell leaves Eugene to recruit, he is sure to pack a pair of NIKEiD shoes, which have his two daughters’ names —Maley and Makay — embroidered on the tongue. The lettering is understated, but his shoes connect him to the biggest things in his life: God, family, friends and basketball.

Outside of that, Campbell admits he doesn’t have many hobbies.

The 34-year-old is a rising star in the coaching world. After one season as an assistant for the Oregon women’s basketball team, he was promoted to associate head coach by Kelly Graves.

He was raised in Mt. Vernon, Washington. Campbell’s dad — a veterinarian — first instilled a tireless work ethic on the family’s farm, but basketball was always there. Out of high school, he played at Cal Poly, but transferred after a year.

In his sophomore year, Campbell arrived at Clackamas Community College in Oregon City. There, he caught up to his peers on the court, gained 20 pounds, led his team to a 28-5 record and started dating Ashley Smith, his wife who he’s known since middle school.

“The decision to come to Clackamas changed Mark’s life as a person and as a basketball player,” Clackamas coach Clif Wegner said.

After Clackamas, Campbell landed at Hawaii and helped the Warriors to an NCAA Tournament berth.

Campbell returned to Oregon City after graduating as a volunteer assistant coach for two years under Wegner’s men’s team. His goal from the beginning: to teach at Clackamas and assemble an elite boys basketball travel team. In a “perfect storm,” Campbell began to work with elite Portland-area boy’s basketball talents. That summer, he met Vance Walberg, then the coach at Pepperdine.

Walberg, now an assistant with the Sacramento Kings, was the first to take a chance on Campbell, even with minimal experience.

“The first time I met him, I knew he was special,” Walberg said. “Right then and there, I knew that was someone I wanted to hire. There’s not one aspect of the game he can’t do.”

Walberg said Campbell has an “aura about him” while coaching. After a year at Pepperdine, St. Mary’s Randy Bennett, who rarely hires outside his circle, brought Campbell onto his coaching staff. The two quickly grew close. They went over film at Bennett’s house and focused on individual development.

In Campbell’s second year, the Gaels made the Sweet 16. Campbell credits Bennett with teaching him how to coach, including culture building and the blueprint of how to win at the NCAA level.

“Everybody has to make sacrifices, but the ones he wasn’t willing to make were him being a good husband, dad and Christian,” Bennett said. “That worked well for us. We’re all about that.”

He practiced with the Gaels scout team, showered and changed into his coaching clothes after practice. He rebounded for future NBA starters, played one-on-one and helped them with anything they needed, be it academic or athletic.

“Campbell is a friendly, nice guy, but when you get him on the court, he’s as competitive as anyone,” Cleveland Cavaliers guard Matthew Dellavedova said. “It was always a battle.”

After two years at St. Mary’s, Campbell moved back closer to his family, coaching Oregon State women’s basketball. Although some thought it was “career suicide,” Campbell’s family always planned to return to the Northwest, so the opportunity at Oregon State was perfect.

In Corvallis, he implemented everything he learned under Bennett and Walberg. He turned down job offers around the country to stay with the Beavers.

“I used to sleep at the office on the couch many nights,” Campbell said. “It was foreign territory because I had no real connection to the women’s side.”

After four years with the Beavers, Campbell joined Graves’ rebuilding project in Eugene. Coaching an elite boy’s club team and teaching at Clackamas was once his dream, but he’s now found a perfect fit under Graves, close to his family’s roots.

“Oregon is the right place, the right time with the right people,” Campbell said. “My family and I plan to be here a very long time.”

Graves said Campbell was his first call when he was hired. That move, it turns out, has paid dividends. Campbell was key in assembling the nation’s No. 7-ranked recruiting class.

When he travels the world recruiting, he always picks up mementos. NBA point guard Patty Mills gave him a kangaroo stuffed animal, which sits in his office. He bought a green Alaska hat while recruiting future Oregon forward Ruthy Hebard and missed the Ducks’ game at Washington State last year to visit Hebard.

“He works so hard,” Hebard said. “It makes you want to work hard for him.”

Campbell often checks in with players on his roster, offering to grab coffee and get together to talk things over, just like his days at St. Mary’s with Dellavedova. Oregon guard Lexi Bando said she admires his family-basketball balance.

“It’s not all about basketball to him,” Bando said.

Campbell prefers to stay in the background and has historically deflected attention, like media interviews, but coaches around the country understand his potential.

“If I could buy stock in a guy, I’d buy stock in him,” Bennett said. “You hope to have your kids turn out as squared away as he is.”