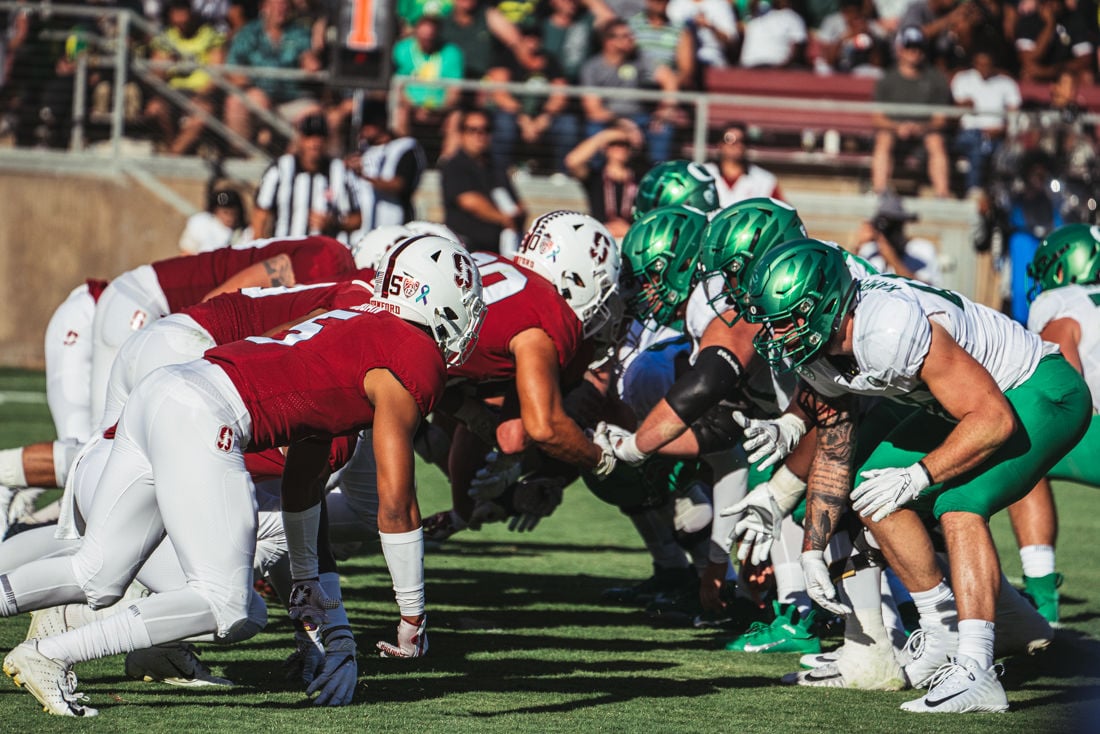 Both teams linemen collide at the goal line. Oregon Ducks football takes on the Stanford Cardinal at Stanford Stadium in Stanford, Calif. on Sept. 21, 2019. (Connor Cox/Emerald) 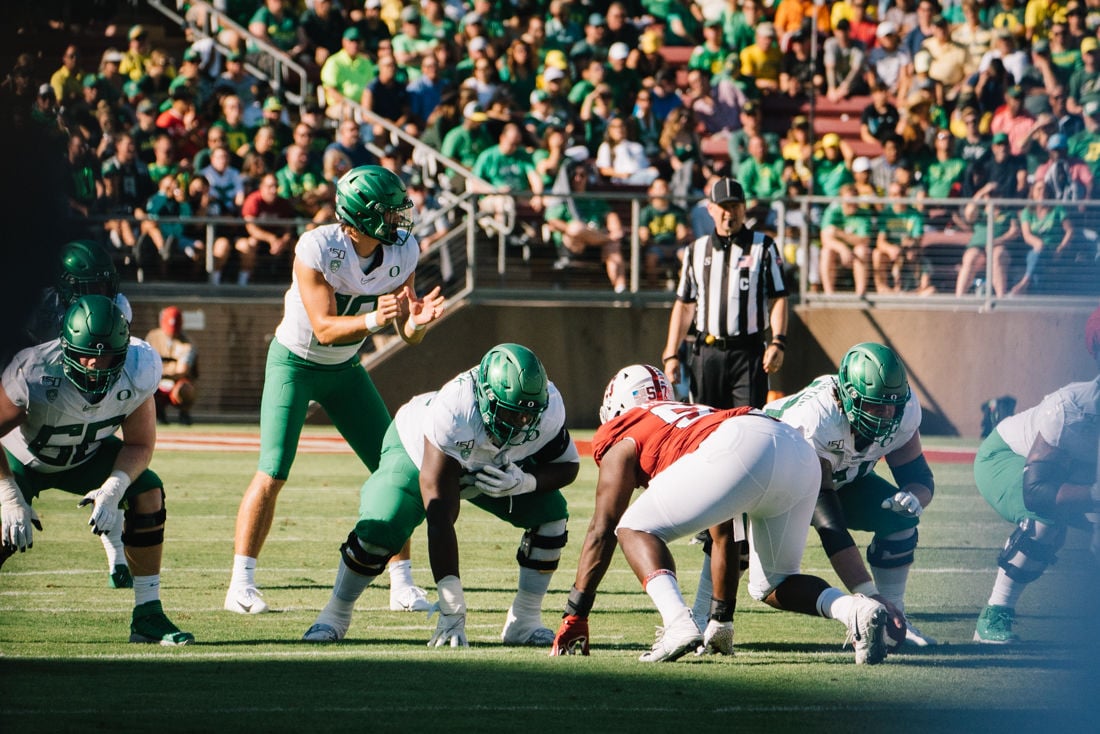 The Ducks offense waits for quarterback Justin Herbert (10) to start the play. Oregon Ducks football takes on the Stanford Cardinal at Stanford Stadium in Stanford, Calif. on Sept. 21, 2019. (Connor Cox/Emerald) 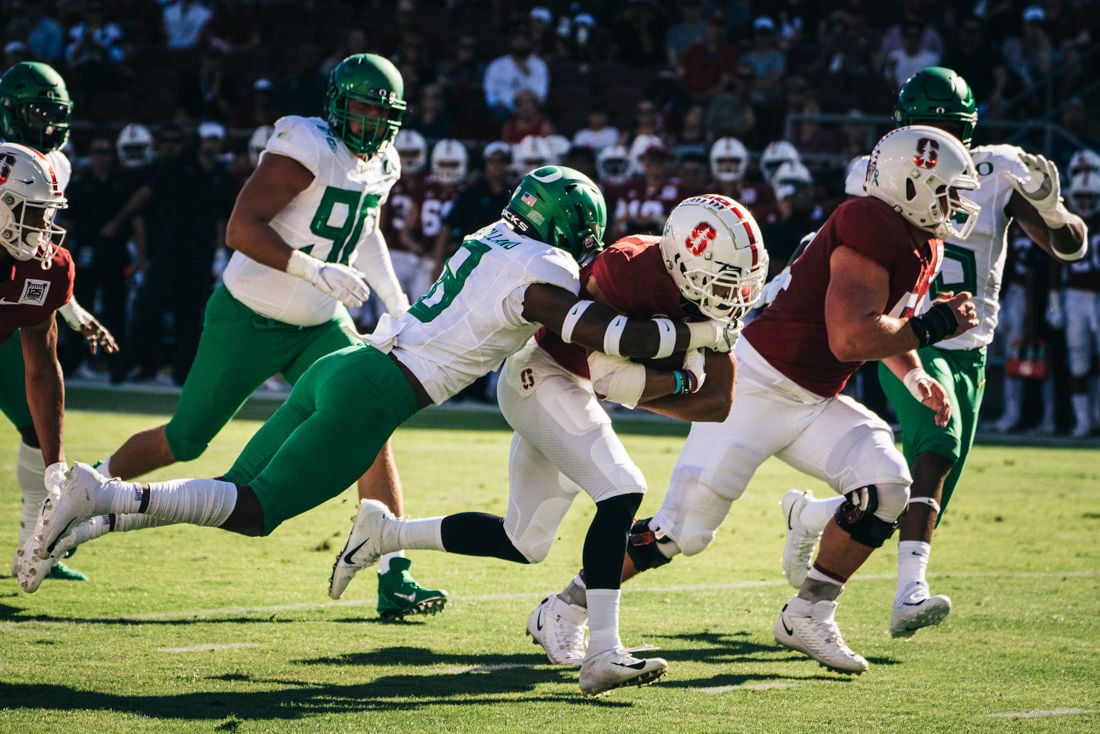 Ducks safety Jevon Holland (8) wraps up a Stanford running back for the tackle. Oregon Ducks football takes on the Stanford Cardinal at Stanford Stadium in Stanford, Calif. on Sept. 21, 2019. (Connor Cox/Emerald)

Here is where the Ducks stand after four weeks and what lies ahead:

The story of the Ducks’ 2019 offense, although not complete, has been a story of growth, improvement and the broadening of their horizons. After a tough loss to Auburn in which the offense struggled down the stretch, the team’s offensive core vowed to shift its focus to the passing game.

In an interview following Oregon’s matchup with Auburn, Ducks offensive coordinator Marcus Arroyo explained that he had to resort to a more conservative form of play calling in order to protect the less-experienced receivers that were pushed into starting roles due to the injuries of projected starters. Arroyo would later have some regrets towards this.

"I think looking back you'd probably say not protecting those young guys who were out there, who had to go in and step in, probably not protect them and see if we cut it loose a little more," explained Arroyo when referring to his all-but-aggressive play calling against Auburn.

Johnny Johnson III and Jaylon Redd started out in an offense that featured several tight ends, including Spencer Webb, who had one of the Ducks’ most impressive touchdowns of the year. Johnson III and Redd became Oregon’s primary targets, together tallying 16 catches for 162 yards. The Ducks only attempted three passes over 20 yards, however, only two of which were caught.

“This is not the defining moment for the whole season,” Arroyo said after the Auburn loss. “This is one game, and we’ve got to move forward.”

Justin Herbert was not the reason for the Ducks’ loss at Auburn. In fact, he’s been near-perfect so far this season. The Ducks’ victories against Nevada and Montana are perfect examples of the offense performing at an elite level, and Herbert played a massive part in those wins, with a completion rate of 74.4%.

“He’s done a really good job of evolving with the guys that have had minimal reps,” Arroyo said. “He’s setting a good standard. I think what we are seeing is continuous improvement.”

Oregon’s inconsistent rushing attack was a primary reason for its shortcomings against Auburn in the season opener. The Ducks rank sixth in the Pac-12 in yards per carry (4.4), sixth in yards per game (154) and are tied for seventh in rushing touchdowns (5).

After two lopsided victories, the Ducks faced a struggling Stanford team on the road. Against the Cardinal, the Ducks again exploited downfield coverage lapses resulting in a less conservative game plan. Quarterback Justin Herbert attempted 24 throws with 19 completions for a total of 259 yards and three touchdowns.

Redd’s 36-yard touchdown reception was the longest of the game, followed by Jacob Breeland and Travis Dye, who both caught for 24-yard passes.

Throughout the absence of starting receivers, the Oregon offense has had to rely heavily upon less-experienced wideouts to make plays.

“I think guys have stepped up,” head coach Mario Cristobal said. “Guys certainly have made plays. Guys that were in reserve roles are now front-line guys, and naturally they’ve had to step up.”

Along with its receiving core, Oregon’s tight ends have also been forced to step up into a much larger role. Breeland has come up huge for the Ducks, reeling in 18 receptions for five touchdowns and 265 total yards so far this season which, at this rate, will soon eclipse his 2018 output.

With a three-game winning streak and No. 13 overall national ranking, the Ducks are well positioned heading into their home matchup with Cal on Oct. 5. Cal, ranked No. 15 in the AP Poll and still undefeated, will face an unranked Arizona State team this coming Friday.

Oregon, on the other hand, has a bye week, giving them the opportunity to bring back some of its injured receivers. With Herbert’s level of play and, potentially, healthy receivers, the Ducks ready for the rest of the Pac-12.

In a year in which much of the offseason hype surrounded senior Justin Herbert and his myriad of unproven receiving weapons, Oregon’s defense has instead reigned supreme in Eugene.

First-year coordinator Andy Avalos has taken what was a middle-of-the-road defense in past years and made them an elite one — historically great as far as Ducks’ defenses go.

“They are playing with confidence,” head coach Mario Cristobal said. “They also feel we could be a lot better, they’ll tell you we still haven’t played our best yet.”

The Ducks rank 13th in the FBS in total defense and 11th in defensive efficiency. They’ve done it against the pass — through four games, the Ducks rank in the top 20 nationally in opponent completion percentage, passing yards per game and yards per attempt — as well as the run, ranking 41st. The Ducks allowed just 0.4 yards per carry against Montana.

Furthermore, the unit has allowed just three touchdowns on the young season — the last one coming in the second half of a gut-wrenching loss to Auburn. Since then, the Ducks have outscored their opponents 133-15.

Not only are they stout, but they make plays. And they do it frequently. Oregon is ninth in total sacks (15), 10th in interceptions (6) and has done its fair share of work in the tackle-for-loss department.

Avalos has instilled an attacking mentality in a defense that was already hungry to prove itself.

The defense plays physically and flows downhill to the ball with speed. Communication and attention to detail, however, is what has set this defense apart early on, especially given that Avalos’ defense utilizes a variety of defensive fronts.

“We make it very difficult on them at practice with the formations, adjustments, the sets they get, and we’re back there with them working them through it,” Avalos said. “We try to show them how to do it, we love them up when they do it right and if it’s not done to the standard, we’re going to let them know immediately.”

No matter who is on the field, the unit plays with an intensity that hasn’t been seen out of Oregon football in years.

“Every day is urgent,” Avalos said. “It always starts with us as a coaching staff; There is no time to waste. Every minute has to be used efficiently… We tell the guys we want to make [practice] more physically and especially mentally demanding to get it to that point where it’s like a game.

Thibodeaux, Faoliu and Ware-Hudson aren’t the only freshmen who have made an early impact — far from it. In fact, due in part to preparedness and in part to the nature of the games — with many being two-plus score games — freshmen have been making plays early and often at every level of the defense.

Mase Funa has bolstered an already deep linebacking corps featuring the likes of Troy Dye, Isaac Slade-Matautia and Sampson Niu. Funa frequently mans the stud linebacker — a linebacker who can drop into coverage but also presents issues as a rusher, often playing near the line of scrimmage.

“I just feel comfortable with [the stud],” Funa said. “It’s the position I played back in [high school], I just know that’s where I fit best and can help the team.”

Funa has helped the team, contributing three sacks and several tackles for loss while playing several positions up front as a backup.

On the back end, the secondary has received strong backup play from a variety of freshmen defensive backs. Mykael Wright pulled down an interception against Montana and both Jamal Hill and DJ James have seen plenty of time as well. Playing time is hard to come by early in games, however, as starting corners Deommodore Lenoir, Thomas Graham Jr. and starting slot Verone McKinley III have proved to be an elite group.

Safety Nick Pickett has secured the starting job, for now, over fellow upperclassman Brady Breeze. One of Oregon’s most impressive players, a true defensive catalyst and leader, Jevon Holland has looked like the best player on the field at times. Holland’s 6-foot-1 frame and blazing speed allow him to play both deep as well as closer to the line of scrimmage in the slot, where he has proven to be a playmaker for the second year in a row.

Many believed the Ducks’ defense would improve and, most likely, be one of the better defenses in the conference. Now, however, they not only look like the class of the conference on that side of the ball, but one of the nation’s few truly elite defenses.

“Focus on us,” Carlberg said. “We really emphasize chasing our standard.”

It remains to be seen if they will keep up their lights-out performance, especially once they face some of the Pac-12’s more explosive offenses. It seems the Oregon defense is ready for anything thrown its way. With the influx of young talent, this unit looks to be a force not only the remainder of this season, but for years to come.

Shane Hoffmann is a sports editor and writer primarily covering the Ducks football and basketball beats. Shane is originally from Ann Arbor, Michigan and came to the University of Oregon in 2018.