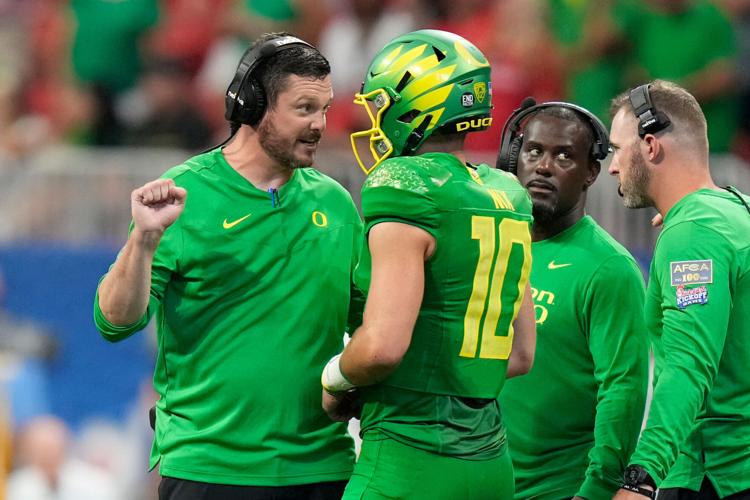 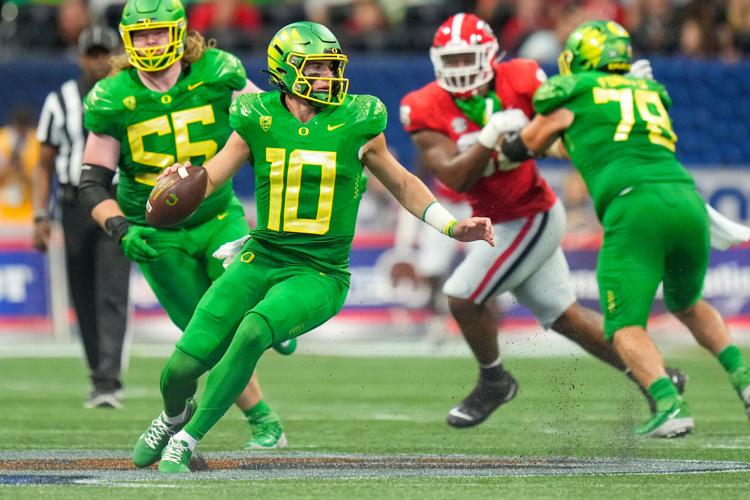 Throughout his first offseason as the Oregon Ducks head football coach, his philosophy on revealing the team’s starting quarterback never wavered. It began when he declared that there would be a competition throughout spring football camp. By the end of those 16 practices, the Ducks took the field during the annual Oregon spring game. A game in which Auburn transfer Bo Nix took snaps with the starters and led all quarterbacks with 230 yards and three touchdowns.

Following Nix’s performance in the spring game, one could assume that he had done enough to be publicly named the starter over redshirt freshmen Ty Thompson and Jay Butterfield.

“Not telling you,” Lanning said, when asked about the starting quarterback.

Regardless of the secret, a common notion grew that Nix had firmly won the job. Yet, Lanning continued to hold the decision to himself.

So, speculation continued. Some of it, delusional.

“I think we’ll use both quarterbacks,” fans on the plane to Atlanta said about Thompson and Nix. “It’ll be like Tim Tebow and Chris Leak.”

The saga continued up until the Ducks’ first meaningful snap against the Georgia Bulldogs. His reasoning: He felt withholding the information would be a competitive advantage. It’s a rationale shared by many football coaches who have approached their quarterback competition as Lanning did. Yet, not a rather successful strategy.

Just ask former Chicago Bears head coach Matt Nagy. In his first season with the Bears, he instilled faith in a shaky Mitch Trubisky. Despite Trubisky going 5-11 in his rookie season, Nagy gave him the keys to the offense and the Bears went 12-4, in 2018, earning a trip to the playoffs for the first time in eight years.

The following season, Trubisky struggled. His completion rate dropped by 3%, his touchdown percentage by two. Nagy’s salve — some friendly quarterback competition. Heading into the 2020 season, the Bears acquired Nick Foles, a year removed from leading the Philadelphia Eagles to their first Super Bowl win.

After winning a ring, Foles had gone to the Jacksonville Jaguars to reaffirm that he truly was an NFL-caliber starter. It didn’t work out as he planned. After going 0-4, Foles fractured his clavicle and missed the remainder of the season. So, heading into 2020, despite Trubisky’s shortcomings, he seemed like the logical choice to start for the Bears.

However, a quarterback competition raged on trickling into week one as the Bears prepared to play the Detroit Lions. The duel, however, wasn’t to light a fire under Trubisky.

"I'll put it this way: Intentionally, I'm not going to give you any direction right now,” Nagy said in a press conference, just days before the Bears faced the Lions.

This wasn’t the only time Nagy put on this act. In fact, the following season he wouldn’t tip his hand on another quarterback competition between Andy Dalton and rookie Justin Fields as the Bears sputtered to a 6-11 mark. By the end of the season, Nagy lost his job.

This ideology followed by football coaches is seemingly a herd mentality. Nagy and Lanning are just following their precursors. In 2013, the then-Oakland Raiders held a quarterback competition between Terrelle Pryor and Matt Flynn. Flynn, a seventh-round draft pick, who found his niche as a pocket passer and consummate backup at the NFL level, was the antithesis of Pryor — a boisterous, top draft pick, who had a likening for extending plays with his legs. No matter, the two were locked in a quarterback competition for a Raiders team that hadn’t enjoyed a winning season in eight years.

The competition didn’t help to change that.

Raiders head coach Dennis Allen didn’t make a decision on his starting quarterback until days before the Raiders first game. During the Raiders’ final preseason game, Pryor took snaps with the starters, completing 7-of-9 passes for 93 yards and a touchdown, while adding another score on the ground. Flynn, on the other hand, attempted six passes and was intercepted on two of them.

“I don’t think Matt played as well as he or we would have liked for him to play,” Allen said after the game. “We’ve got to continue to get better, we’ve got to keep moving forward, and that’s a position that we’re still continuing to evaluate.”

The Raiders finished 4-12 that season, tying their worst mark since 1962.

The question remains, correlation or causation? Maybe it’s smarter to instill confidence in the starting quarterback by announcing it before the first game-week.

Clearly, Lanning’s decision did not give the Ducks a competitive advantage as they lost to Georgia 49-3, the largest deficit in any Chick-fil-A Kickoff Game. A game in which Nix struggled to move the ball and forced two early throws that resulted in interceptions.

“We have other quarterbacks on our team that obviously can compete as well, but Bo is our quarterback,” Lanning said. “Bo did a good job today of handling some adverse situations, but he is also going to figure out how can he improve, just like we can as a staff.”

While the Ducks wait for their next chance to take the field hoping to reshape the perception surrounding their team, Lanning will have to defend his decision rather than hold it in.

Breaking: Oregon running back Byron Cardwell enters his name in the transfer portal on Tuesday

Photos: The Oregon State Beavers hand the University of Oregon Ducks their third loss of the season with a big comeback effort

Aaron Heisen is a writer from Los Angeles, California. He enjoys covering Oregon sports including basketball, football, and track and field. When he’s not writing, he’s playing basketball, reading, watching televison, or spending time with his family.