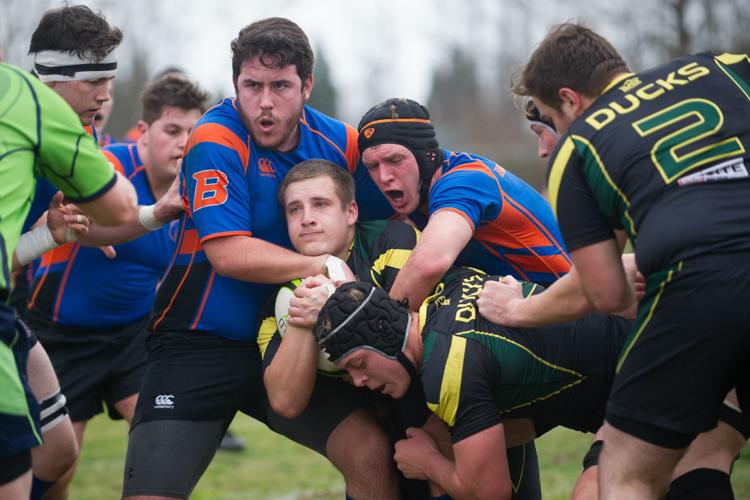 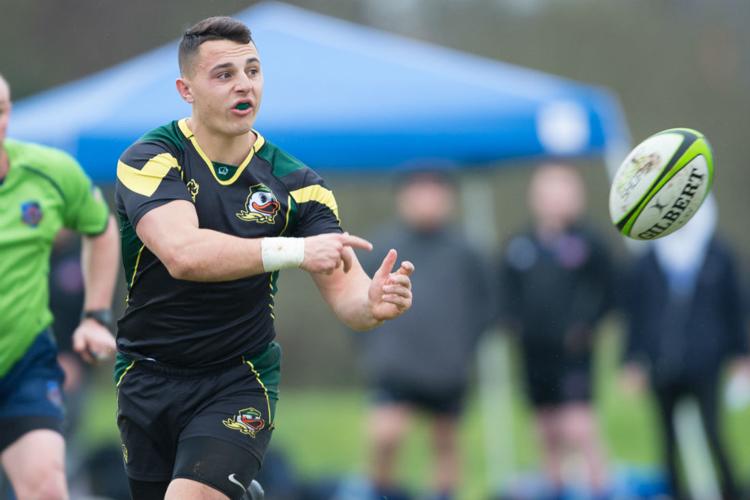 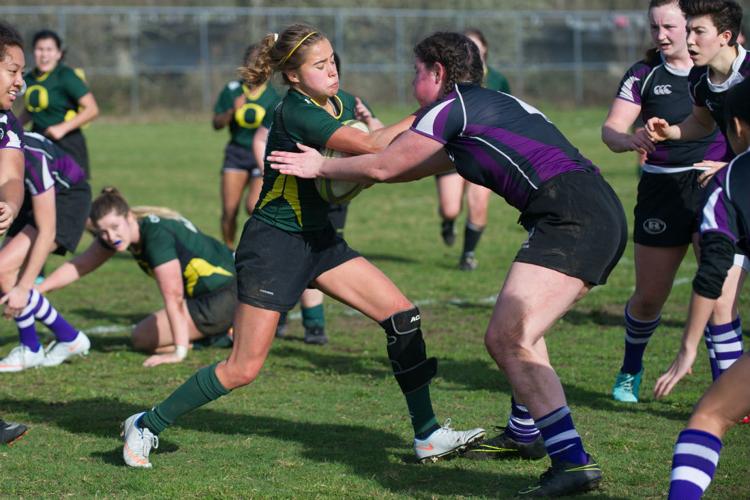 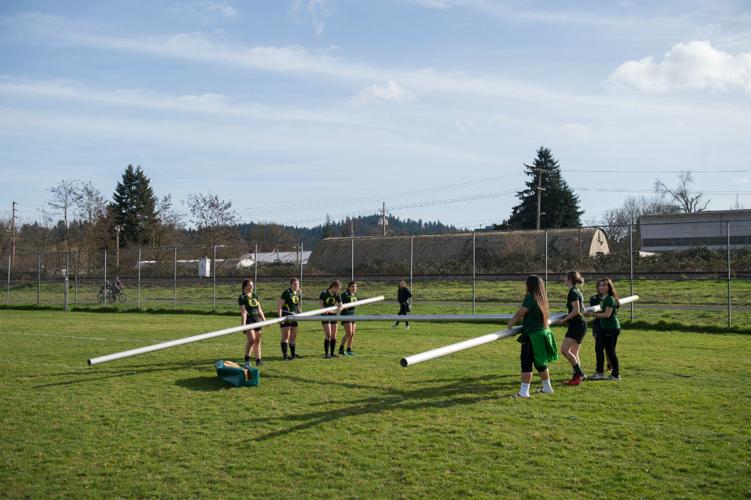 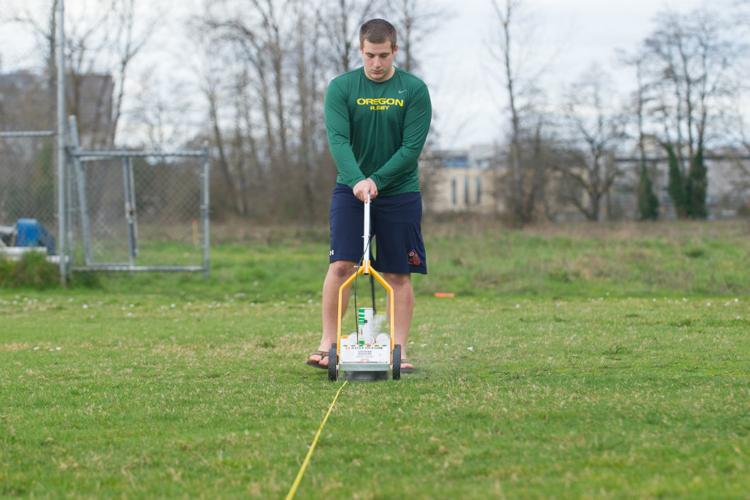 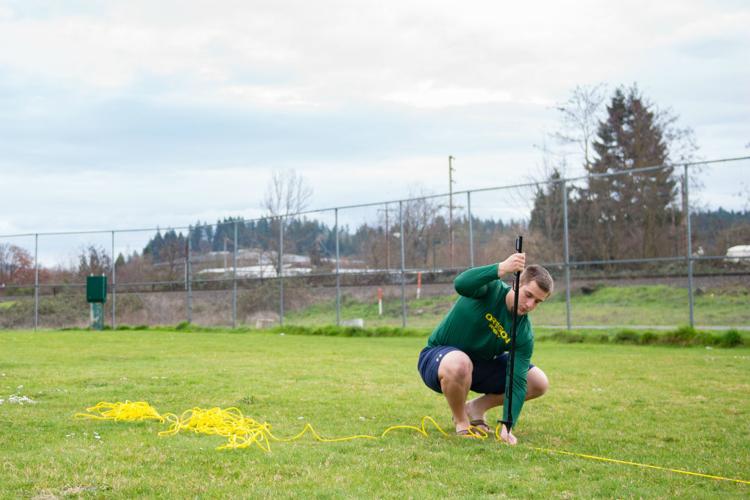 It’s 2 p.m. on a recent Friday and Spencer de Urioste and Charles Diemer drive onto Riverfront Field in a black Jeep at the banks of the Willamette River. De Urioste grabs a Bluetooth speaker from the car and plays Luke Bryan’s hit song “Huntin’ Fishin’ & Lovin’ Every Day” —  country music is a favorite of the team.

De Urioste and Diemer will spend the next four hours painting lines and patching holes in the grass ahead of the University of Oregon men and women rugby teams’ matches the next day. Come Saturday, the men’s team will arrive early for its match to set up the goalposts and boundaries. It’s just another match day for them.

“It starts with every guy to make sure that the day goes well, and to do that, everybody’s got to do a little work in setting up the field,” men’s head coach Pate Tuisue said.

Because the rugby teams are club teams and not official UO athletic programs, they have to pay out of pocket, set up the fields themselves and train in their own time. The teams have to deal with heavy equipment and a setup process unlike most other UO club sports.

The financial struggle for a club sports team

Charles Diemer sets rope on the rugby field so he can paint straight lines for the game on the next day. (Adam Eberhardt/Daily Emerald)

The rugby teams have to purchase equipment with money from dues and fundraising events to buy all the balls, jerseys and cones themselves. They even purchase the goalposts and field markers.

If the rain doesn’t wash away the lines, an extra layer is applied to make the lines bold enough for the next matches.

This is just one aspect of the financial difficulties the team faces.

The team has a storage area at Riverfront Field. It’s a caged area connected to a backstop used for baseball and softball. There’s nothing covering the top of it — fixed structures aren’t allowed on the field — which allows weather, and even people, to get in. It has a lock, but that was only added recently.

“It gets really frustrating,” Diemer said. “We don’t really have good facilities out here at all. Anyone can easily jump in and take any of our gear easily. So, a lot of our stuff we keep at our homes and try to keep it safe.”

In the fall, someone did get in and steal some of the equipment, including the striper device used to paint the lines, stampers to fill holes in the field and a rope and spool used to trace the lines and keep spectators on the sidelines.

All in a day’s work

De Urioste is the main man when it comes to getting the field ready for match day. He immediately looks for the holes for the goalposts to begin his measurements for painting when he arrives on Friday.

He’s now experienced, especially with the difficult task of measuring and painting the field. He does it efficiently. But it didn’t always go as smoothly as it does now.

“We ended up with a trapezoidal field because the senior class had graduated and I was a sophomore at this point so I never had any experience with this,” de Urioste said. “We realized we had 63 meters on one side and 57 across on the other side.”

Players head to the team’s storage area off to the side of the field to grab the posts and the rope. Some players go to the cars to get field markers while others warm up or get taped up for injuries.

Vanessa Hufnagel tries to fight off a tackle from a Washington player. (Adam Eberhardt/Daily Emerald)

Kickoff against Boise State for the men’s team is set for 11 a.m. Originally, it was scheduled for 10 a.m. but the men’s B-side had its game canceled after Willamette University was unable to field enough players. This allowed the men’s A-team to get an extra hour of rest in the morning and kick off later.

De Urioste, Diemer and the rest of the team return at 9:45 a.m. on Saturday to finish setting up the field.

With the lines painted, the team just has to put the meter markers into the ground at the back of the try zone, the try zone lines, the 10-meter lines, 22-meter lines and 50-meter line. Then, the goalposts go in.

The players bring the three pieces — two uprights and a crossbar — to designated holes in the field for the posts. They connect them. Then six or seven players hoist the poles into the ground.

At first, they’re a little slanted and somewhat tilted forward on one side.

They push the posts and add several small wooden stakes to keep the posts in the holes and add the roughly 5-feet-tall pads onto the posts so players don’t run directly into the metal.

The team adds a rope to the sideline to keep spectators from the touchline and field. Now, it’s game time.

The men begin their warm-up as the cloudy Eugene sky looms overhead. It’s ideal rugby weather that imitates the sport’s birthplace in gloomy Rugby, England. Spectators begin to arrive while joggers on their morning runs yell “Go Ducks” in support.

After the official checks the players’ cleats and equipment to make sure they don’t have metal on the underside of them, the teams take the field. Game on.

The men dominate in a physical battle. With hard, crunching tackles and several scrums right in front of the try zone, the players leave bruised and muddied.

The Ducks don’t allow Boise State anywhere near their try zone as Oregon shut out the Broncos 31-0. Once the match finishes, it’s the women’s turn.

The clouds clear and the women gear up and sprint onto the field to warm up. They start the match as fast as possible against their opponents from the University of Washington, who they would go on to beat 52-17.

The work after the whistle

The Oregon women’s rugby team takes down the goalpost after its match against Washington on Saturday, Feb. 3.

Right after the final whistle of the women’s match, several men’s players walk the field to collect the markers while the women’s team gathers underneath the goalposts with its opponents for a group photo. Once they are done, it’s time to dismantle the goalposts.

“It’s a little bit exhausting after playing, but because there’s a lot of us, we split up the roles,” women’s player Mililani Leui said. “[We] try to stay positive after the games.”

The players toss the poles and rope into the storage area, lock it up and head out.

The sun begins to set as players and fans walk across the now torn-up field toward campus. It’s time to recover. They’ll do it all again next week.