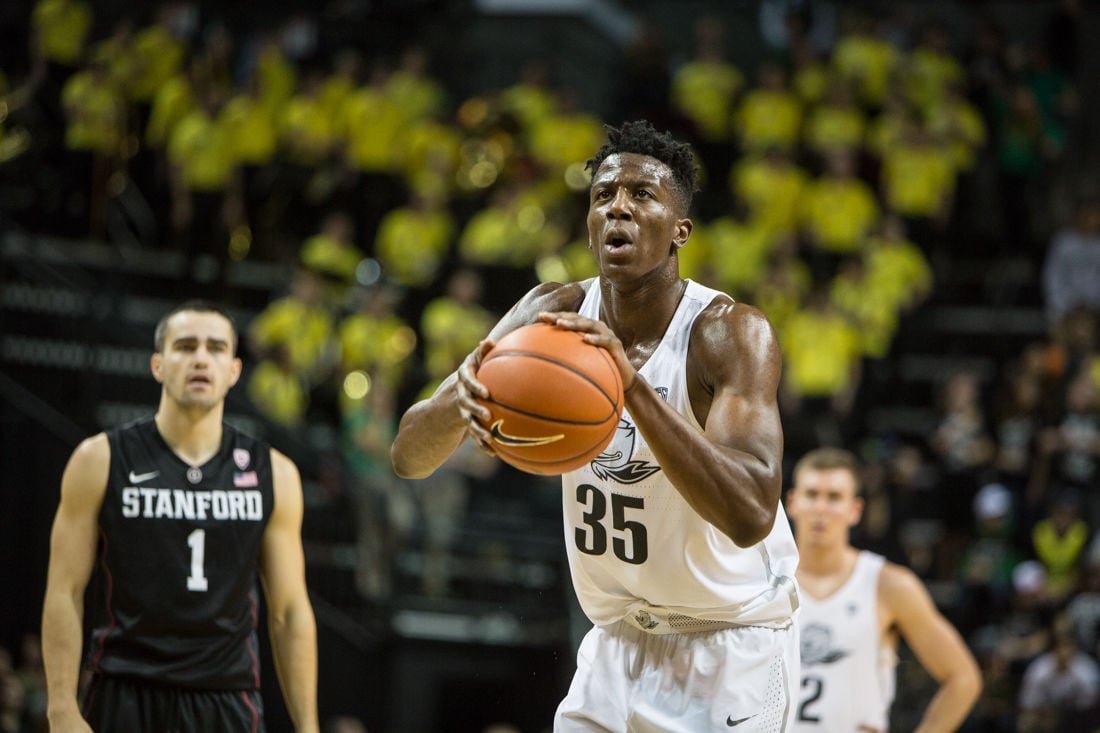 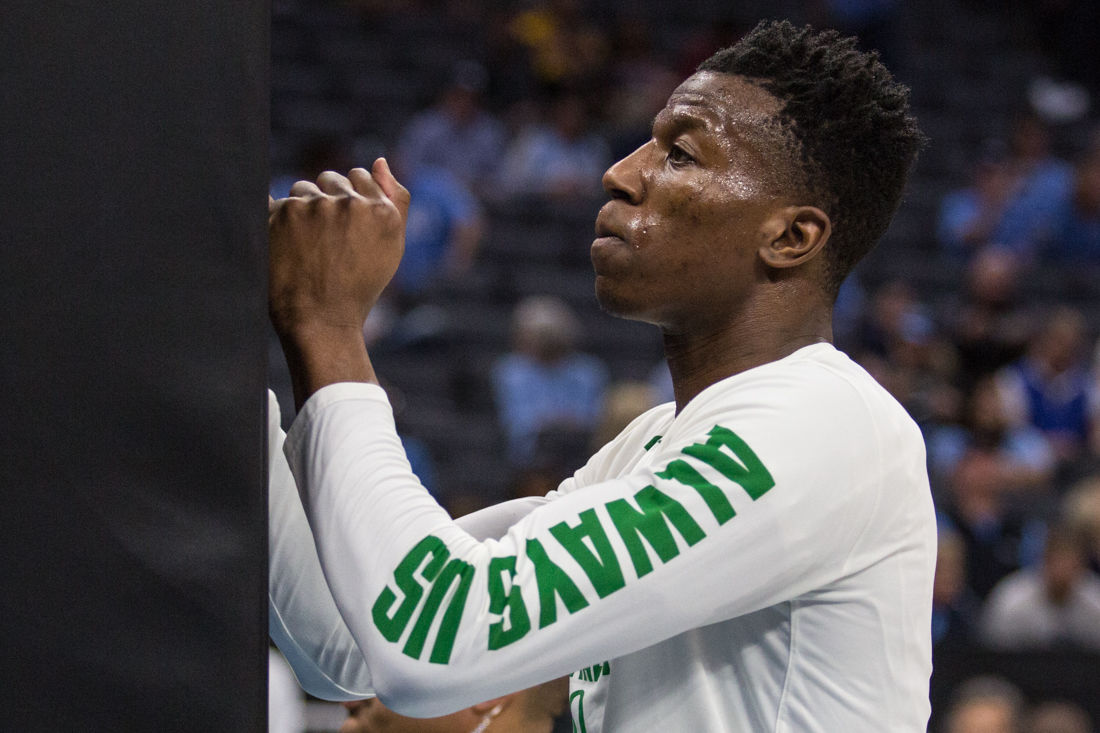 Oregon Ducks forward Kavell Bigby-Williams (35) pounds the padding under the basket during warm-ups. The No. 3 seed Oregon Ducks play the Rhode Island Rams in the second round of the NCAA Tournament at the Golden 1 Center in Sacramento, Calif. on March 19, 2017. (Aaron Nelson/Emerald) 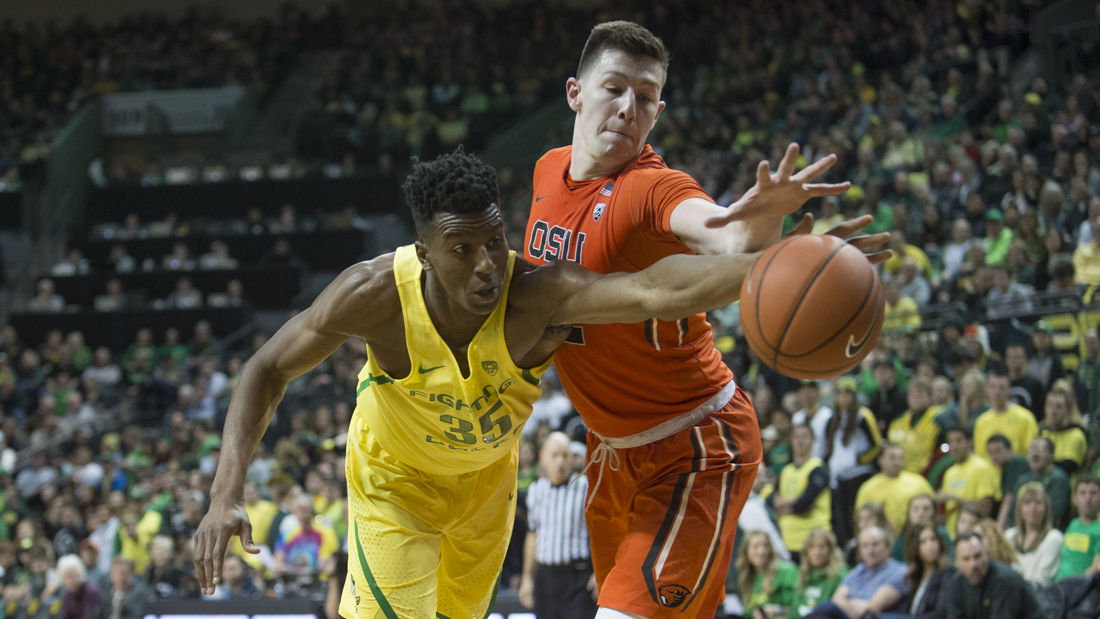 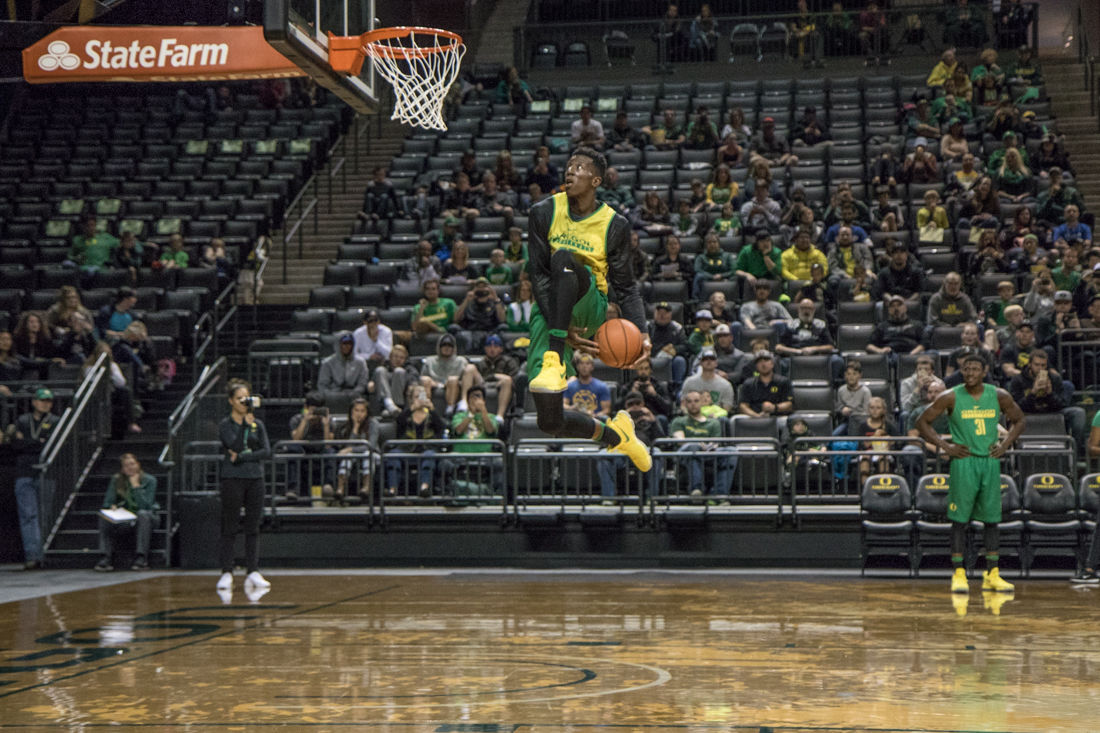 Oregon Ducks forward Kavell Bigby-Williams (35) pounds the padding under the basket during warm-ups. The No. 3 seed Oregon Ducks play the Rhode Island Rams in the second round of the NCAA Tournament at the Golden 1 Center in Sacramento, Calif. on March 19, 2017. (Aaron Nelson/Emerald)

Former Oregon forward Kavell Bigby-Williams played the 2016-17 men’s basketball season while under criminal investigation for an alleged sexual assault, the Emerald has learned.

Bigby-Williams, a junior, is accused of sexually assaulting a female between 10 p.m Sept. 17 and 3 a.m. Sept. 18, 2016, at an apartment near Gillette College, a Northern Wyoming Community College District (NWCCD) school. NWCCD campus police have been investigating Bigby-Williams in Gillette, Wyoming, since Sept. 19.

Bigby-Williams, 21, was a student and basketball player at Gillette College before he transferred to University of Oregon in 2016. He played the most recent college basketball season under head coach Dana Altman and helped take the Ducks to the Final Four. On June 20, he announced his decision to transfer from Oregon to Louisiana State University.

The allegation comes to light three years after a female UO student accused three Oregon basketball players of rape in March 2014. Altman and UO officials came under fire after it was revealed in May 2014 that the players competed for Oregon in the NCAA Tournament while they were under criminal investigation.

University of Oregon police have known about the case involving Bigby-Williams since Sept. 28 — two days after the fall 2016 academic term began — public records show. A UOPD report obtained by the Emerald shows UOPD detective Kathy Flynn attempted to interview Bigby-Williams about the incident twice, but Bigby-Williams avoided speaking to Flynn.

Carter — an assistant basketball coach at Gillette College and Bigby-Williams’ former coach — said in June that Bigby-Williams is no longer his client, and he was unsure whether the investigation was current. Carter acknowledged the case was an alleged sexual assault, but said the last time he heard from NWCCD police about the case was roughly the same time he asked UOPD not to contact his client anymore on Sept. 29.

NWCCD police could not provide any details to the Emerald about Bigby-Williams’ case. NWCCD police spokeswoman Wendy Smith said the agency is unable to release any information about open investigations, but that the police report would have been made available if the case was closed.

McIver said it is UOPD policy to notify Title IX and the Office of the Dean of Students when it learns of an alleged sexual assault case involving a student. Title IX convenes a risk assessment team to immediately consider emergency action such as temporary suspension or removal from on-campus housing.

If the person accused of sexual assault is a student-athlete, UOPD informs the coach of the allegation only if doing so would not “hamper the investigation,” McIver said. The Title IX risk assessment team, however, would include an athletic department representative “when appropriate, such as when there will be an emergency action taken,” according to McIver.

McIver said UO will not provide specific information about whether UOPD informed Title IX and the Office of the Dean of Students in this case because the information would be protected under student privacy law.

UO President Michael Schill did not know about the sexual assault allegation involving Bigby-Williams and declined to share his thoughts on it.

“I don’t have any awareness of that,” Schill said. “In any event, I can’t comment on an individual student. What if I was asked by another reporter about you being obnoxious? Would you want me to tell them that?”

That was the last interaction UOPD had with Bigby-Williams. McIver said UOPD provided the information to NWCCD police, “which did not request any additional assistance,” and added that police can’t legally question someone who refuses to be interviewed and has asked for legal representation.

Walker said Altman and Mullens knew UOPD requested Bigby-Williams’ contact information, but that no one at the athletic department knew he was accused of sexual assault.

The Emerald requested to learn the outcome of any disciplinary proceeding involving Bigby-Williams for a violation of the student conduct code, but the request yielded no responsive records from UO. It is UO policy, however, not to disclose the outcome of a student conduct investigation if the accused student is found responsible for sexual misconduct.

“In consultation with our victim’s rights advocates and Title IX coordinator, we have determined that the privacy rights of survivors of sexual misconduct and the need to encourage reporting in such cases means that we are not going to release information relating to sexual misconduct cases in student conduct proceedings as a general rule,” UO general counsel Kevin Reed said via email.

According to Bigby-Williams’ Twitter account, he was in Wyoming on Sept. 19, the day after the alleged sexual assault occurred. He returned to Eugene for fall term, which started Sept. 26.

Bigby-Williams committed to play for Oregon in April 2016. At 6-foot-10, 223 pounds, he was rated the No. 3 junior college prospect in the country and named the 2015-16 Spalding National Junior College Athletic Association Division I player of the year.

Bigby-Williams played 37 games for Oregon this season, averaging 9.8 minutes and 3.0 points. He played increased minutes off the bench during the Ducks’ run to the NCAA Tournament Final Four, after center Chris Boucher went down with an injury.

He recently asked for and was granted a release to explore a transfer to another school. On June 20, Bigby-Williams committed to transfer to LSU.

Altman was heavily scrutinized three years ago after news broke in May 2014 that three Oregon basketball players — Dominic Artis, Damyean Dotson and Brandon Austin — played for the Ducks in the NCAA Tournament while they were under investigation for a March 2014 alleged sexual assault of a female student.

Altman was also criticized for recruiting Austin to play for Oregon after police investigated him for a separate alleged sexual assault at his former college, Providence University. No criminal charges were brought against Austin, but he was suspended from the Providence basketball team for a season.

The Lane County District Attorney’s office dismissed the charges against the three Oregon players in April 2014, writing, “while there is no doubt the incidents occurred, the conflicting statements and actions by the victim make this case unprovable as a criminal case.”

Altman told reporters during a press conference in May 2014 that he knew an “incident” was being investigated in March but didn’t know the nature of it or which of his players were involved.

The alleged victim in the case sued UO and Altman in January 2015, alleging Altman knew Austin was accused of sexual assault when he recruited him. The lawsuit also alleged UO did not immediately discipline the players because doing so would have adversely affected the basketball team’s performance. She settled with UO for $800,000 and free tuition in August 2015.

The three former players filed a lawsuit against UO and four administrators in March 2016, alleging among other things that UO’s investigation of the players was biased and that the accusations cost them future income. That suit is ongoing.

President Schill says there is no easy answer to whether a student-athlete should be allowed to play sports while under criminal investigation.

“The fact that someone is under investigation doesn’t mean that they’re guilty, and to be penalizing somebody just because we’re looking into something doesn’t mean that you should take away their rights,” Schill said. “Every case is going to be different, and obviously the most important thing from my point of view as president — and I think yours as a student — is first and foremost to make sure that the students and the faculty and all members of our community are safe.”

The UOPD report is linked here.