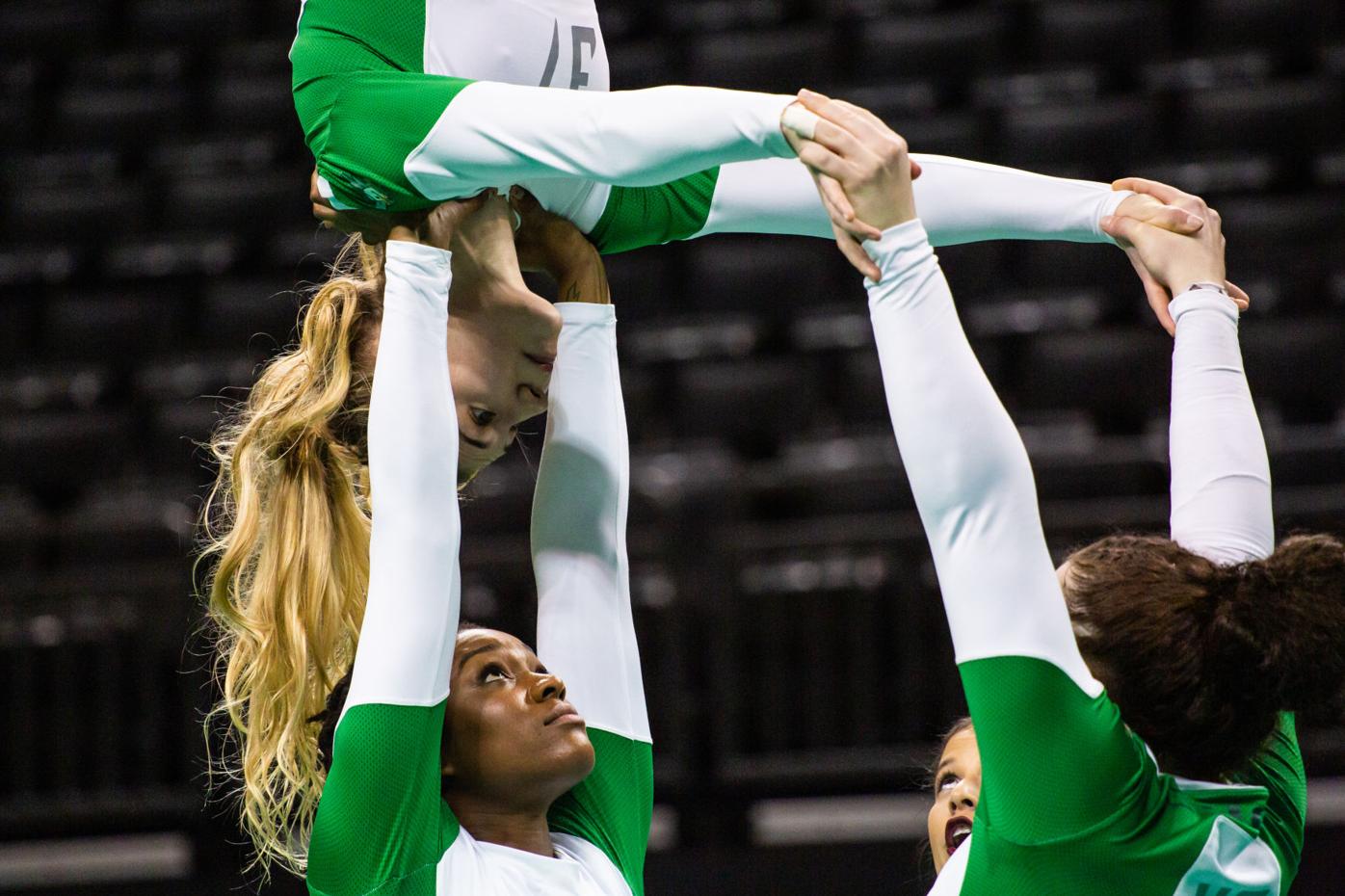 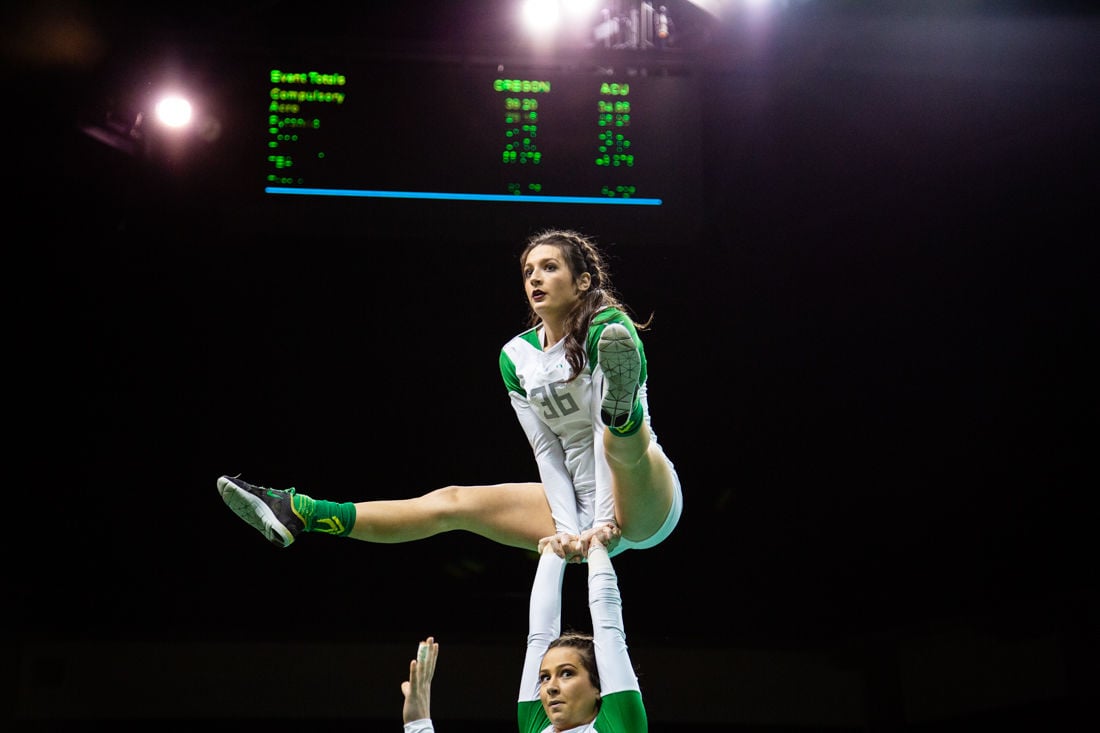 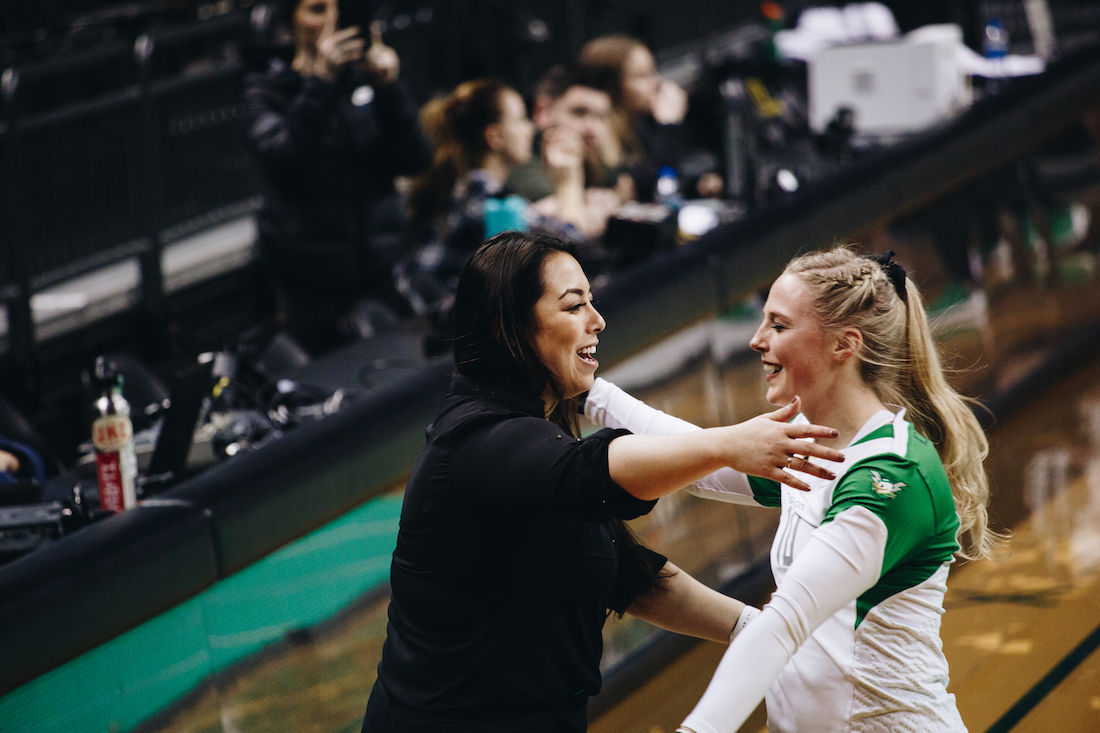 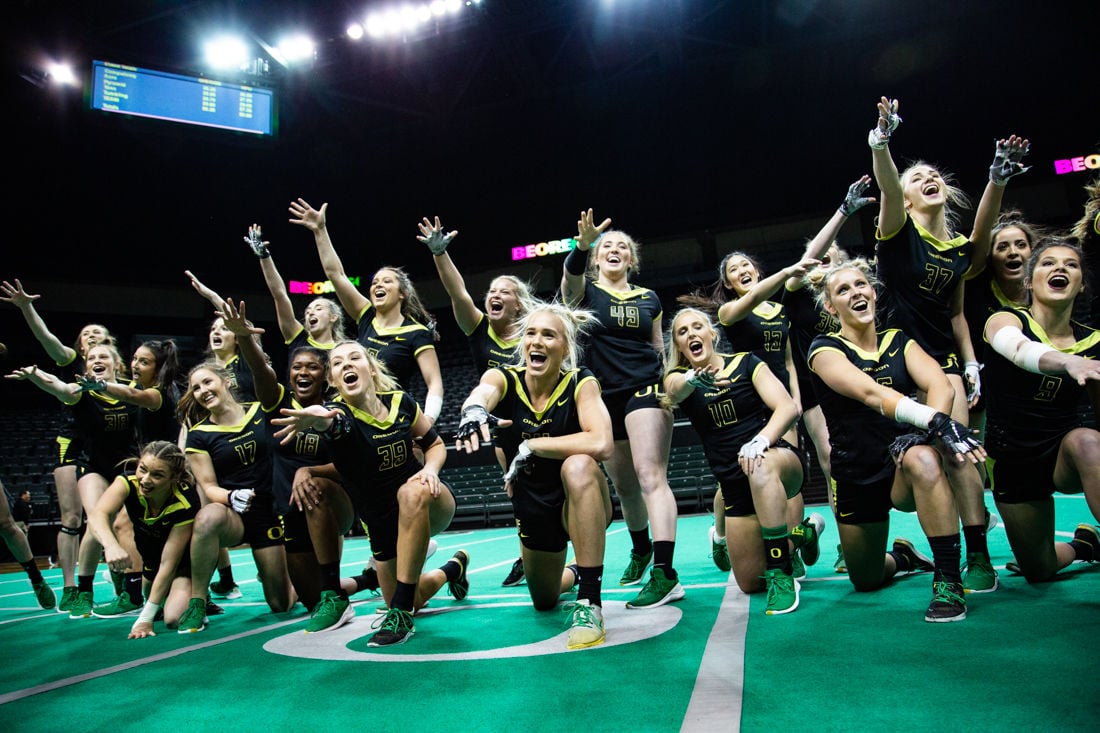 Felecia Mulkey had enough. It was her 11th year coaching competitive cheer at Kennesaw State University, yet she was wanting more action, more intensity and more athleticism.

Her pitch to KSU’s athletic director about reshaping the program to better focus on acrobatics and less on cheering had just been denied. So, she decided that the 2008 National Cheerleading Championships in Daytona Beach, Florida, would be her last time coaching. She had already begun looking at law schools across the country because she didn’t want to be known as “just a cheerleading coach.”

What she didn’t know was former Oregon senior associate athletics director Renee Baumgartner was at the same national cheerleading championships and was immediately impressed with her coaching just from the preliminary competitions.

Within 24 hours, Baumgartner invited Mulkey to apply to Oregon’s newest head coaching position for a sport that had yet to be established and was in the works at several universities. Oregon’s program would be called team stunts and gymnastics, and had the intention of combining the competitive side of cheer with the athleticism of gymnastics and acrobatics.

It was everything that Mulkey had pitched just weeks prior at KSU.

“I knew in the first five minutes that she could lead our program and lead the sport,” Baumgartner said about watching Mulkey coach at the cheerleading championships.

About a decade later, acrobatics and tumbling has distinguished itself from gymnastics and cheerleading and expanded to more than 30 colleges nationwide with more than 250 athletes competing.

This week, universities will compete in the ninth annual acrobatics and tumbling national championships. The sport will also take its closest step in becoming NCAA recognized after spending the last 10 years as a varsity sponsored sport under the National Collegiate Acrobatics and Tumbling Association.

“It’s not about taking the place of gymnastics or the place of cheer,” Mulkey said. “It was created in the niche, in that gap, that young women needed.”

Instead of applying to law schools in summer of 2007, Mulkey moved from Georgia to Eugene for a head coaching position in the sport that was in its infancy.

Since that initial move, she has won every national championship in the sport during her seven years coaching at Oregon (2007-2014) through her current head coaching role at Baylor University.

“We knew what we were doing,” Mulkey said. “We created this sport because we wanted to create this opportunity for women. That’s why I went out there. I look back now, and I’m like ‘What was I thinking? Why did I move from Georgia?’ I didn’t even know what the sport was. We didn’t even know if it would work. But I believed in my heart.”

When current Oregon head coach Keenyn Won graduated high school, no program existed for her to continue her athletic career as a competitive cheerleader.

She loved the intensity of competitive cheerleading where athletes performed elaborate routines with acrobatic skill sets. The idea of cheering on the sidelines at games didn’t appeal to her, thus she entered college with no plans to be a student-athlete.

Yet, in the spring of 2009, her freshman year at Oregon, Won met Mulkey and was introduced to the idea of acrobatics and tumbling. The following year, Won, along with 28 other women, made Oregon’s first roster in the sport.

“It took away the bows and the makeup and the skirts and took all the athletic components and the scoring of gymnastics into this sport, which were all the things that I fell in love with in the competitive side,” Won said. “I walked into that practice and I knew it was for me.”

One of the biggest moments during this initial process was designing the sport’s original uniforms in order to help distinguish it from sideline cheer and gymnastics. Mulkey met with Nike designers in 2008, and after their first outlines were of cheerleading uniforms, she knew she would have to lead the design of the two-piece, adaptable uniform that acrobatics and tumbling athletes wear today.

“We want to change people’s minds and, in their minds, we want them to be able to separate cheer from what we are doing,” Mulkey said. “When my team goes out on the floor to compete, I don’t care if people think underwater-basket weaving, I just don’t want them to think cheer.”

In 2011, under the NCATA, the sport launched its first official season with six schools competing nationwide.

Meets break down into six events with each event divided into multiple heats. The heats include building pyramids and acro structures, multi-combination tumbling passes and synchronized tossing. Each heat is scored by officials with 10 being the highest possible score.

It’s a competition outline that Mulkey first developed on a napkin on the plane during her first recruiting trip for Oregon. It was on these recruiting trips that she learned just how valuable it was to break down misconceptions about the sport.

“It was very interesting because if you said the word cheer or cheerleading, you got the answers of Dallas Cowboy Cheerleaders, the Laker Girls,” she said. “I don’t think I ever heard the word ‘athlete.’ If I said the word ‘gymnast,’ I would get Mary Lou Retton or some gymnast at the time, or I would get ‘athletic.’ You never heard that word with cheer."

Just three weeks ago, Mulkey got the news she’s been waiting over a decade to hear.

After reviewing the NCATA’s 2018 proposal, the NCAA Committee on Women’s Athletics asked to hold a conversation with selective NCATA members in order to hear the sport’s plans for expansion. The meeting will occur on Wednesday, just a day before the 2019 Acrobatics and Tumbling National Championships begin at Baylor.

If the committee chooses to recommend acrobatics and tumbling to the emerging sports list, the next step in the process for the NCATA will be preparing legislation in advance of a final vote for NCAA Divisions I, II and III next January. Once earning the emerging sport status, sports have 10 years to grow to 40 schools before they can qualify for a full championship sport under the NCAA.

“It’s rewarding just knowing that there are a bunch of women that created a sport for women and have been very dedicated and have not lost sight of the goal and feel really good that this sport will become an NCAA sport,” Baumgartner said. “That’s just why we do this.”

By gaining the status, teams will compete against other teams in their specific NCAA divisions. As of now, there are two conferences in the sport: the Eastern College Athletic Conference and the Mountain East Conference. Teams compete across all divisions.

The NCATA sent its latest proposal in August to the NCAA. Over the past 10 years, Mulkey said the organization has sent about four proposals.

Since its inception, acrobatics and tumbling has grown from six to 30 teams and is sponsored as a varsity sport in all three NCAA divisions and in the NAIA, with rosters varying from 30 to 50 athletes. In each of those schools, the sport opened doors to women athletes and to women in the workforce — there are just two male assistant coaches in the whole nation.

“It’s so cool to be a part of something that is new and growing and giving so many new opportunities for women,” Oregon senior Hannah Blair said. “I can’t even explain to you how much it means to me. There are little girls that come up to our meets and look up to us so much and they’re so excited to try acro someday.”

Acrobatics and tumbling fuels the passion for athletes to continue their athletic pursuits, like Blair, who come from backgrounds in competitive cheer.

“When I first saw it and I saw an entire meet, I was like, ‘Wow, those are some strong girls. Those are athletes — there is no question about it,’” Oregon junior base Katie Bachman said. “I wanted to be one of those girls.”

“It may seem small in the world-scale, but for us, to have this go nationwide to see acrobatics and tumbling become an emerging sport, is just phenomenal in itself. For not only females to continue their academics at the college level, but also their sport,” Won said. “Hopefully the NCAA sees that and pushes us through.”

Maggie is a senior sports reporter covering all things Oregon sports including football, volleyball, women's basketball and softball. Contact her via email at mvanoni@dailyemerald.com