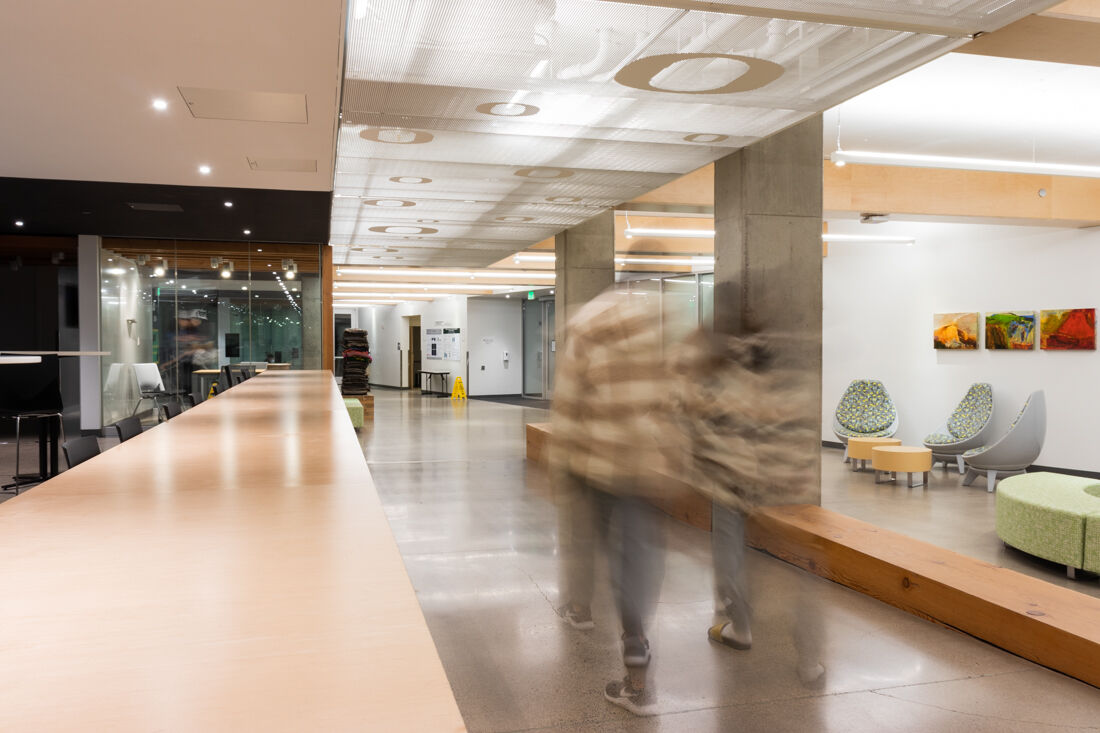 Students walk through the lobby in Kalapuya Ilihi. RAs across campus are bringing up disparities between dorm culture and how that affects their workloads. (Molly McPherson/Daily Emerald) 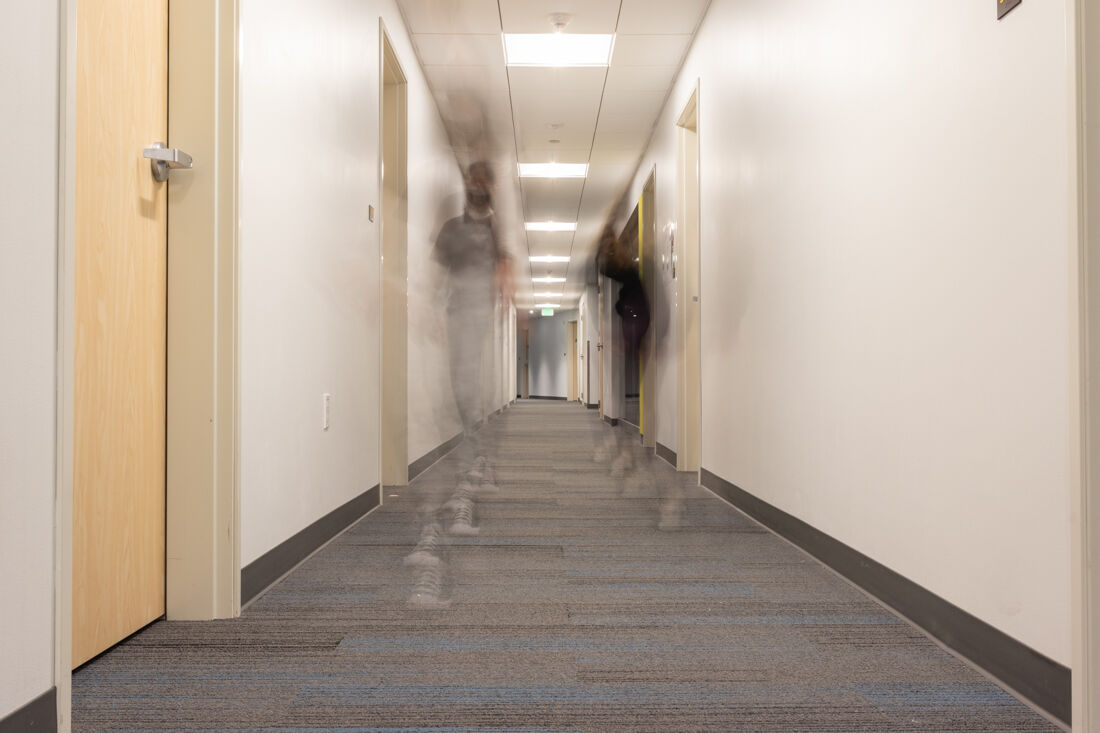 Students walk down the hall in the North Wing of Kalapuya Ilihi. RAs across campus are bringing up disparities between dorm culture and how that affects their workloads. (Molly McPherson/Daily Emerald) 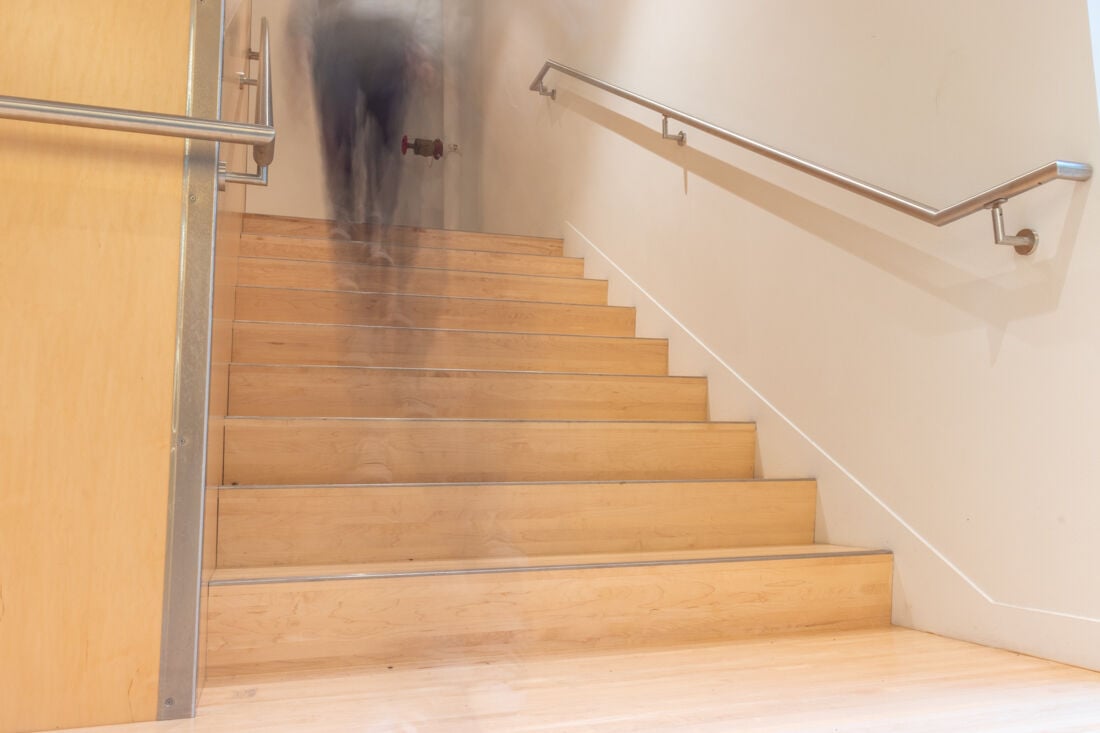 A student walks down the stairs in Kalapuya Ilihi. RAs across campus are bringing up disparities between dorm culture and how that affects their workloads. (Molly McPherson/Daily Emerald)

Students walk through the lobby in Kalapuya Ilihi. RAs across campus are bringing up disparities between dorm culture and how that affects their workloads. (Molly McPherson/Daily Emerald)

Students walk down the hall in the North Wing of Kalapuya Ilihi. RAs across campus are bringing up disparities between dorm culture and how that affects their workloads. (Molly McPherson/Daily Emerald)

A student walks down the stairs in Kalapuya Ilihi. RAs across campus are bringing up disparities between dorm culture and how that affects their workloads. (Molly McPherson/Daily Emerald)

For this story, interviews were conducted with RAs anonymously. Throughout the story anonymous sources are referred to with pseudonyms and given “they/them” pronouns to maintain anonymity.

Resident assistants do a lot more than bust you for having a Mike’s Hard Lemonade. They allow UO to operate. Without them, residence halls would not function, and UO could not market the traditional dorm experience to prospective students.

However, the conditions of the RA job have not adapted to the pandemic and have left workers underserved for their labor. This situation sets a bad precedent for on-campus workers and hurts UO’s future prospects of having a reliable labor force.

RAs operate on the front lines of the university and are essential to a safe environment as students undergo difficult transitions into college. This position deserves far more support by UO in this time of pandemic-induced insecurity and stress.

There is a realistic fear of COVID-19 cases on campus, but paradoxically UO Housing has directed RAs to relax their enforcement to lessen duties, according to the RAs I interviewed. They no longer have to write up unmasked students or limit guests, which makes their jobs easier. But leaving those policies unenforced may lead to increased case numbers in the face of Omicron.

“It's a little weird we’re lightening policy,” Peyton, an RA in Kalapuya Ilihi, said. “As a worker it is less stressful, but as an individual you think they would be stricter.”

The feeling of being in a double bind is common among RAs. Having less responsibility reduces the load but generates concern for their floor’s safety. This also comes at a time when some residence halls are understaffed. According to university spokesperson Saul Hubbard, 5% of the campuswide RA team is yet to be hired.

However, understaffing means current RAs need to pick up the slack; they are still expected to act as authorities of UO wherever and whenever.

“An RA is an RA for any resident,” Andrew, an RA in Hamilton Hall, said. “You are an RA for the university, not a specific dorm.”

Whether that means being a mandatory reporter or telling students to put their masks on, you are never truly off the clock. For all the work and responsibilities they have, RAs receive rewards that are just middling enough to make asking for more uncomfortable. Benefits for their position include free dorm housing, 85 weekly meal points and a $100 monthly stipend, according to the RA position description.

While satisfactory for some, the benefits package leaves many feeling undercompensated, especially since the RA quality of life heavily depends on what dorm they are assigned.

“It just doesn't feel like a lot,” Quaye, an RA in Unthank Hall, said. “Your enjoyment depends on the building, and I don't think that's fair.”

It's incredibly archaic that the RA position does not scale its benefits to the residence hall. It’s not like UO doesn’t know that Kalapuya Ilihi has more amenities than Carson, or that LLC requires more work due to its status as the “party dorm,” according to all three RAs.

The uncertainty of if you’ll actually enjoy your job can make RAs reconsider if the position is worth it.

“I often think about how I could work an hourly job and be able to afford a bigger apartment with full amenities,” Peyton said. “And I’m lucky to have a bathroom.”

The RAs interviewed for this article said that having the benefits tied to the building makes it more noticeable that the stipend is only $94 after taxes, and Kalapuya Ilihi, one of the nicest dorms, could still lose an RA this year. And if you end up in Hamilton Hall, your nightly rounds take 30 minutes more than other dorms.

It surprises me that, at a time when UO is adamant about keeping campus open and in person, supporting residence hall employees isn’t essential. If RAs really are the force that allows the university to operate, why not make the position appealing beyond a shadow of a doubt?

This is not an isolated feeling; just a few months ago, RAs from Stanford University and University of Southern California went on strike demanding better conditions.

At the end of the day, RAs have their basic needs met, but there aren’t enough incentives to keep workers in this essential university position. Because if they go, UO does as well.

Porter is an opinion columnist at the Daily Emerald. As a student of Global Studies and Cultural Anthropology, he writes passionately about politics and culture through an intersectional lens.