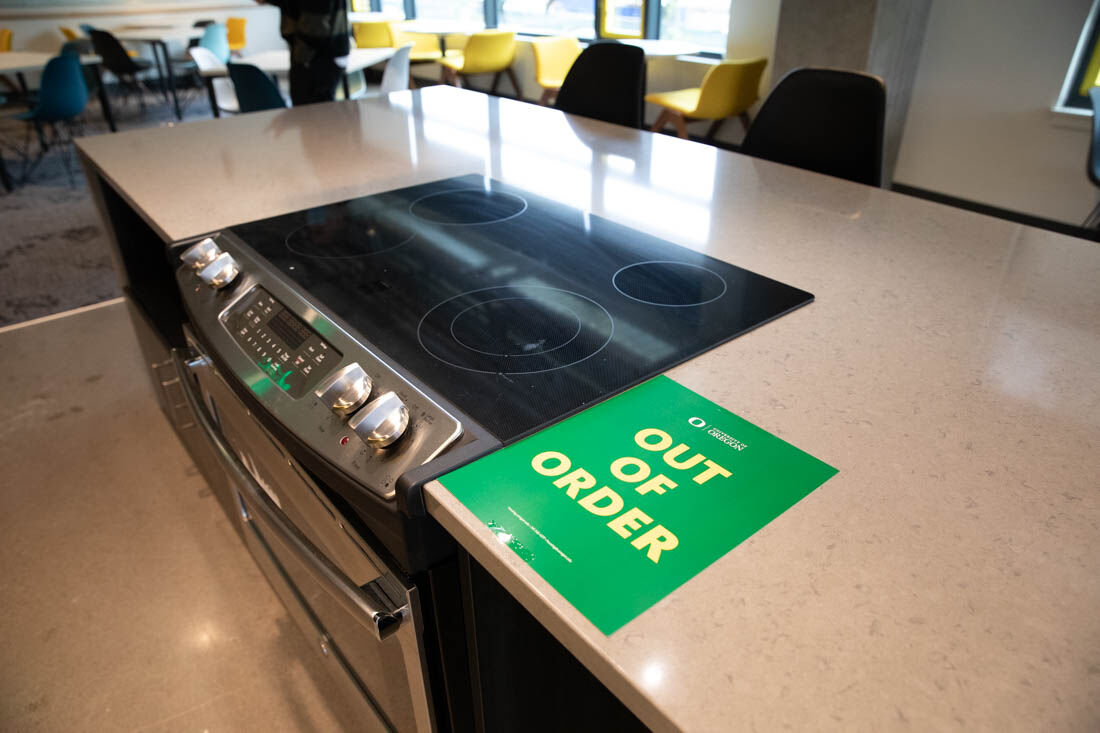 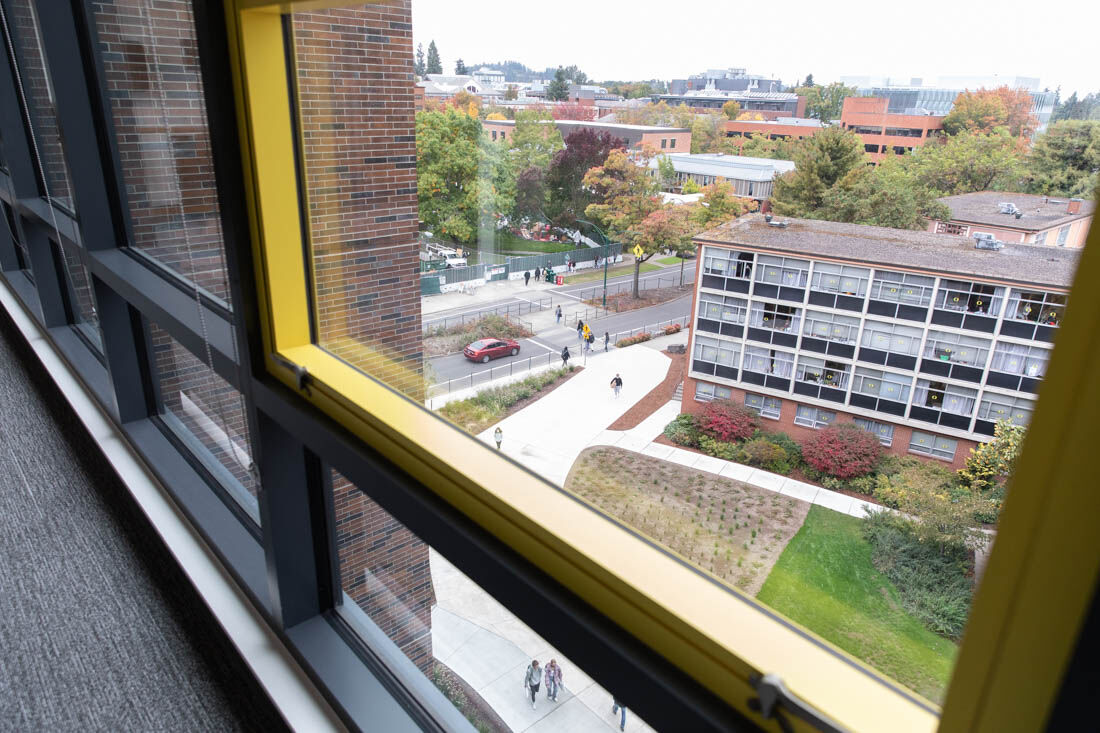 The view of campus from the top floor of Unthank Hall. Unthank Hall faces many maintenance issues upon a rushed school year opening (Maddie Stellingwerf/Emerald). 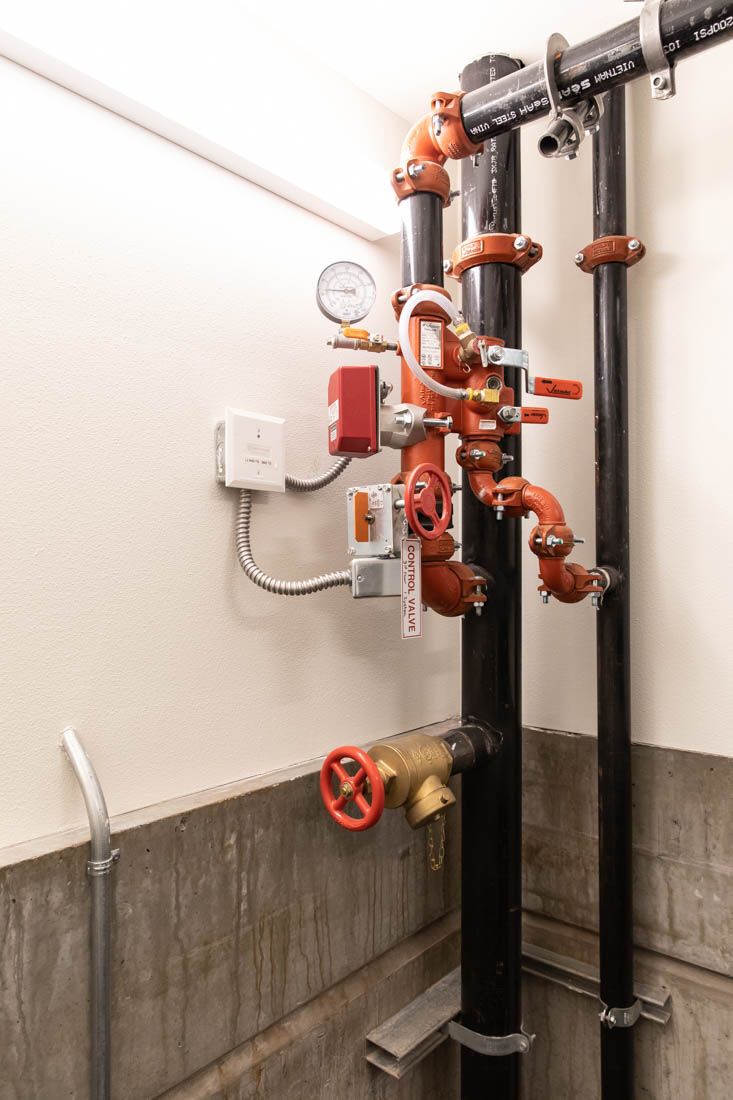 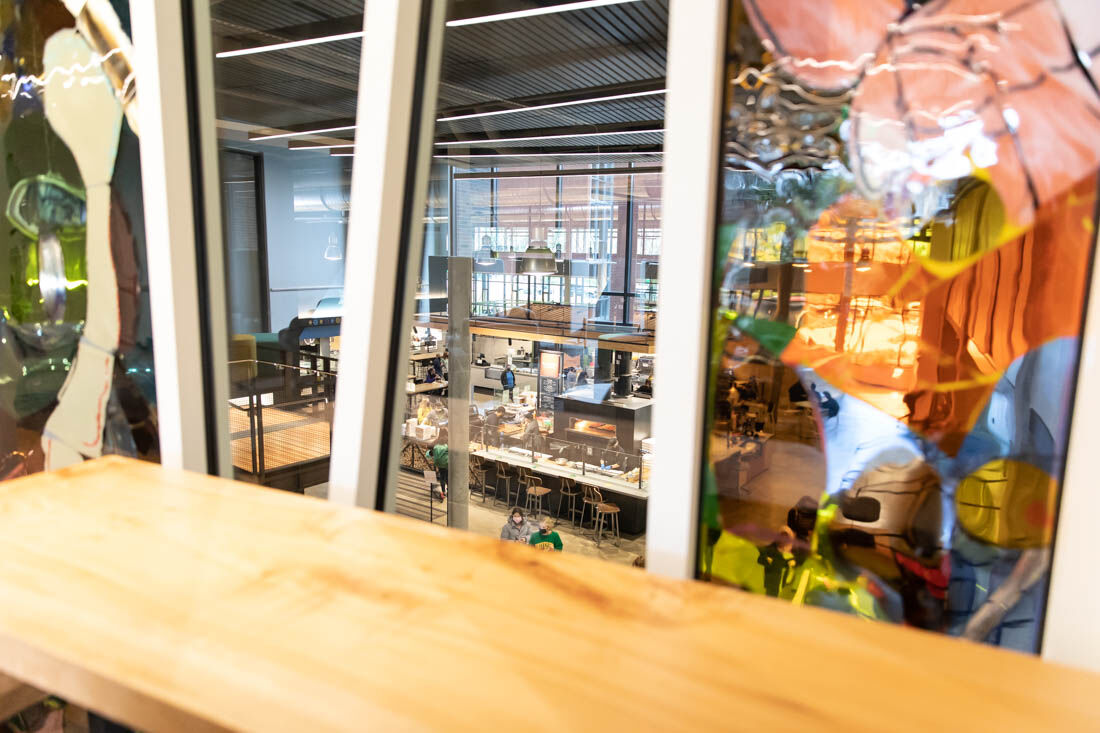 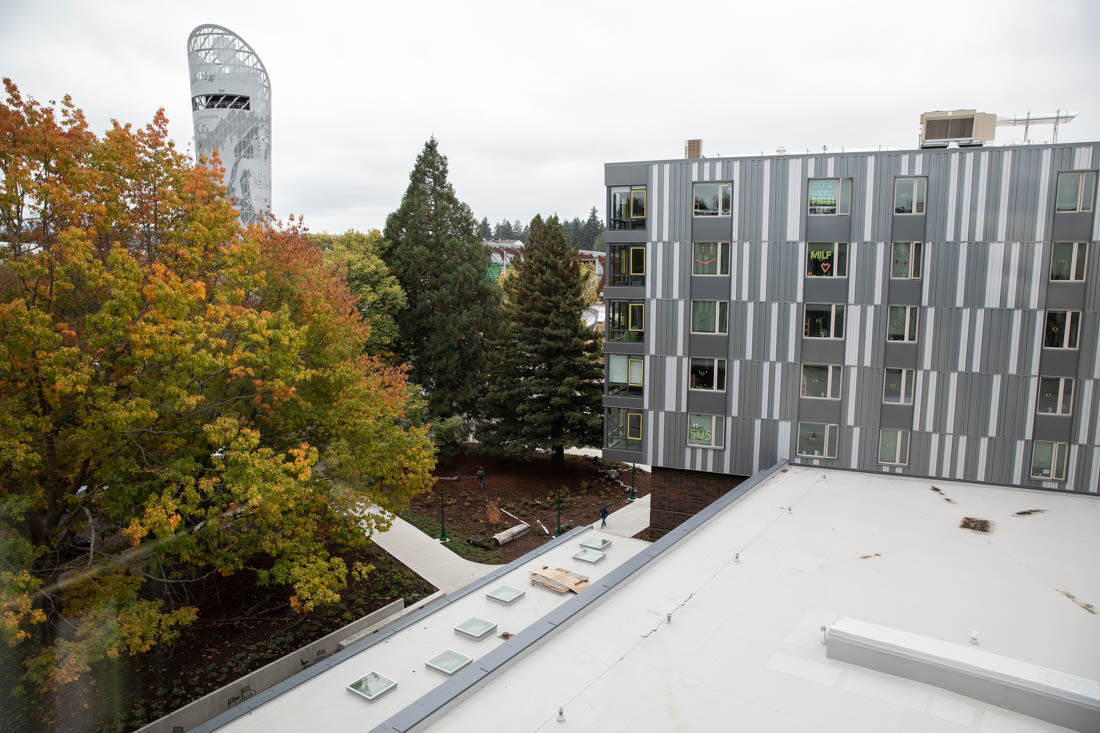 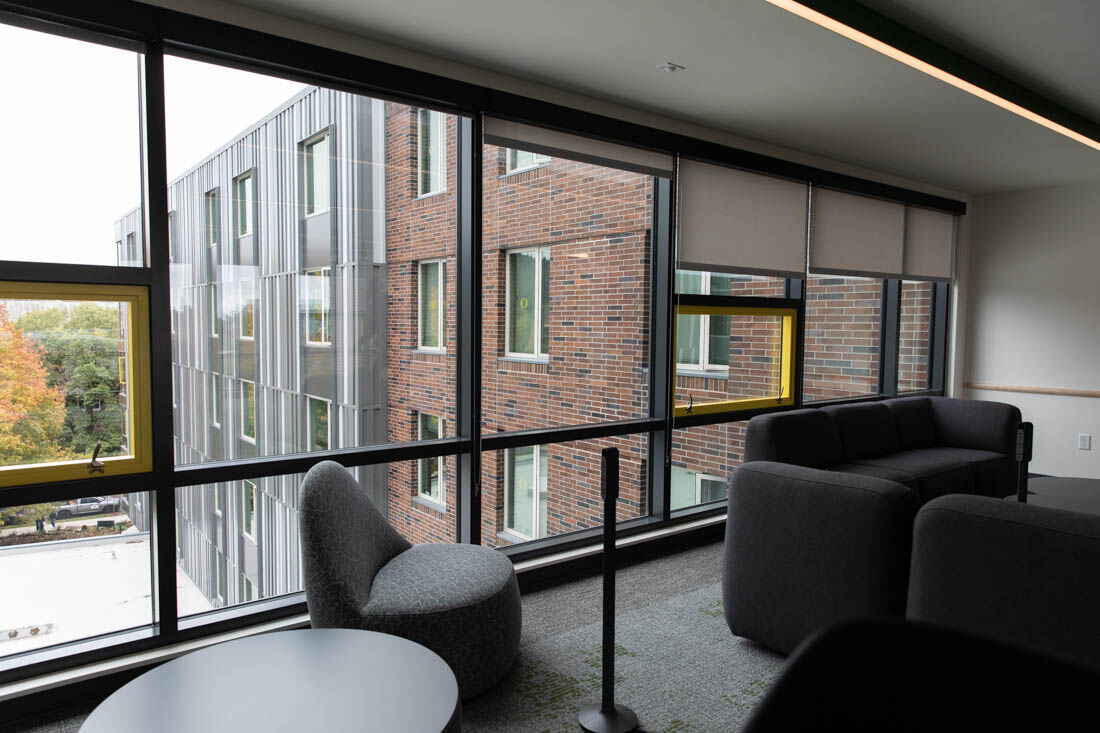 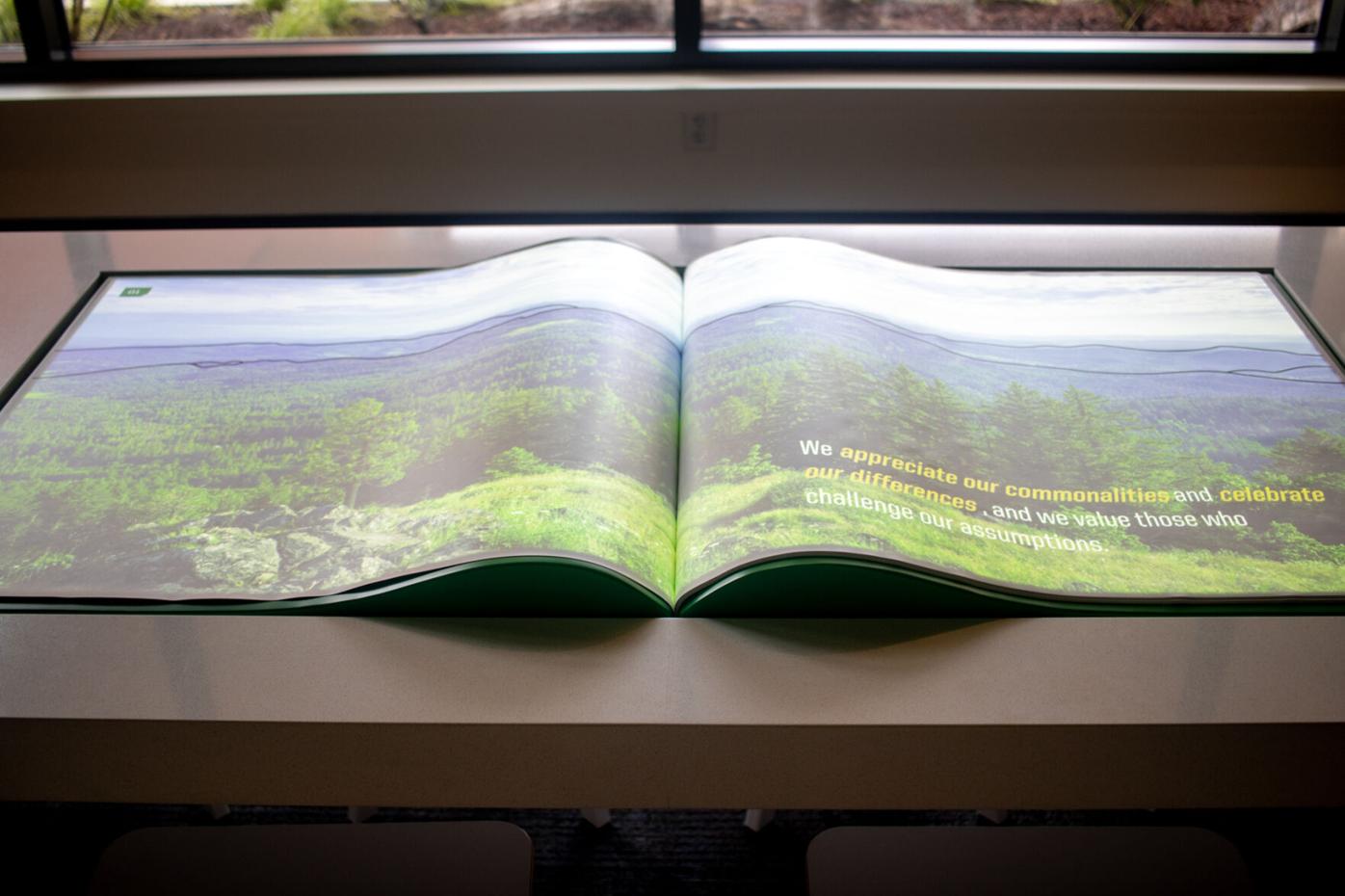 A projected interactive book is located in the Welcome Center in the newly constructed Unthank Hall. (Will Geschke/Emerald) 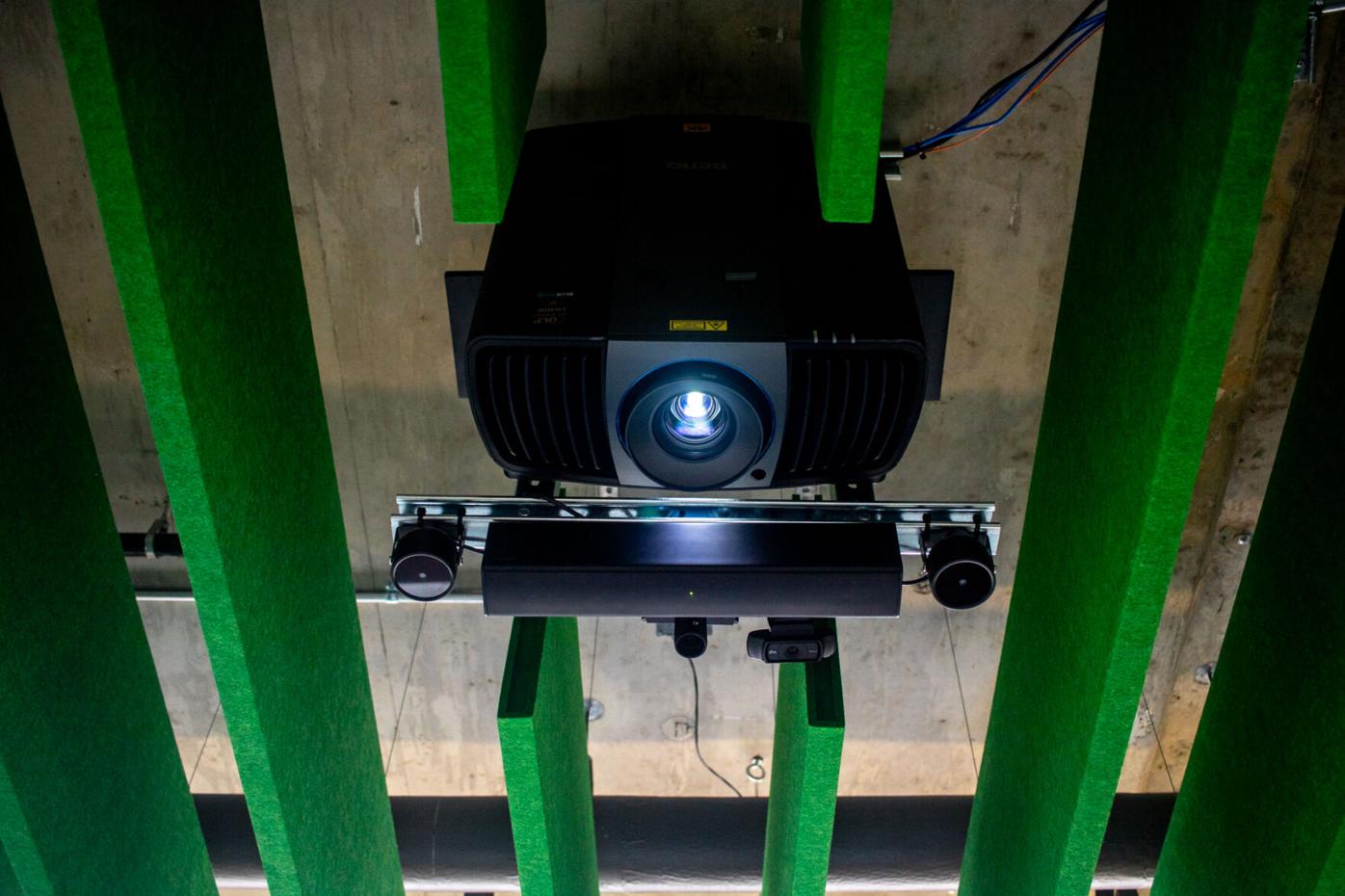 A projector illuminates an interactive book in the Welcome Center in the newly constructed Unthank Hall. (Will Geschke/Emerald) 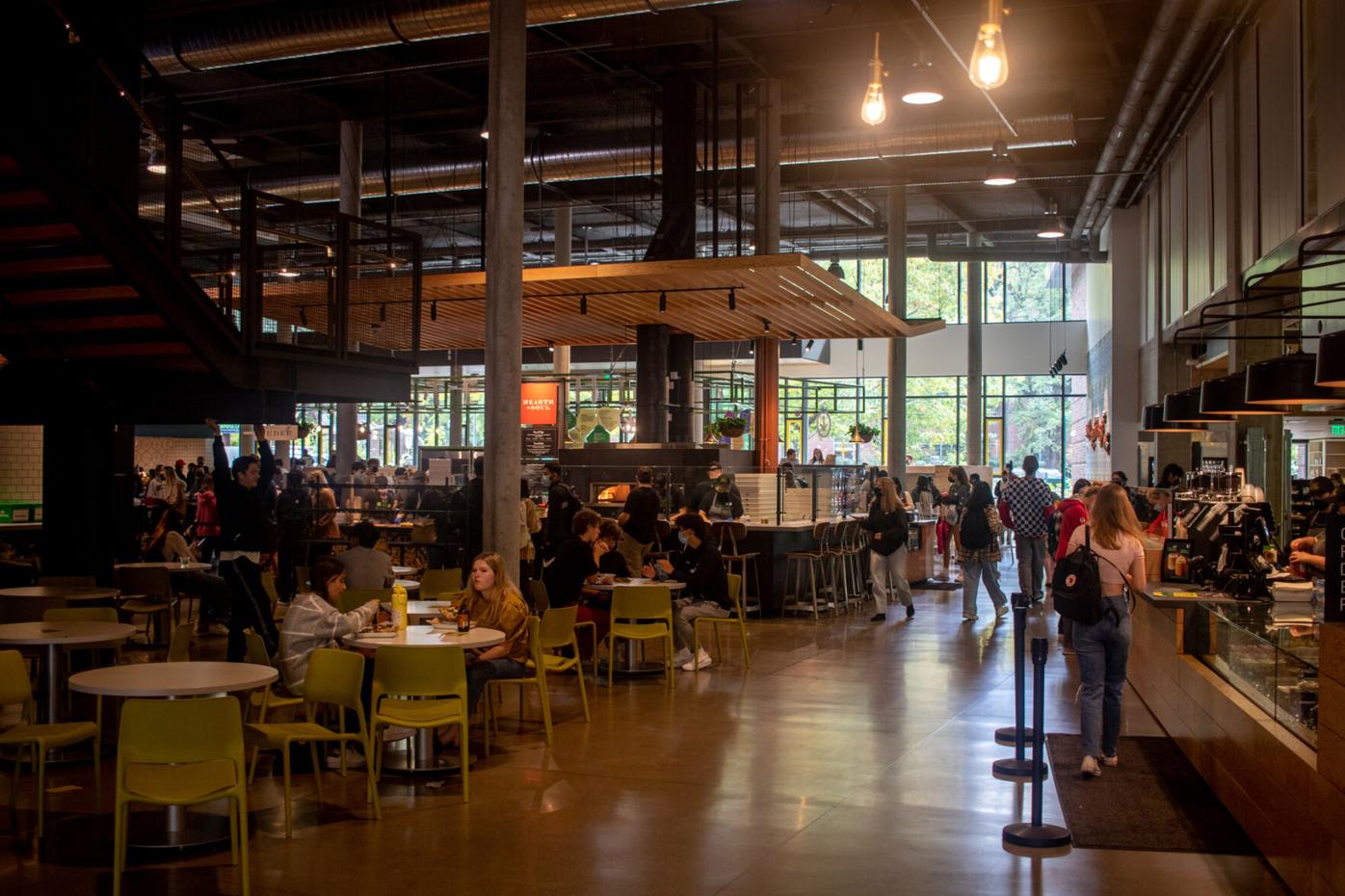 Students gather to eat food in the newly constructed Unthank Hall on the Unversity of Oregon campus. (Will Geschke/Emerald)

The view of campus from the top floor of Unthank Hall. Unthank Hall faces many maintenance issues upon a rushed school year opening (Maddie Stellingwerf/Emerald).

A projected interactive book is located in the Welcome Center in the newly constructed Unthank Hall. (Will Geschke/Emerald)

A projector illuminates an interactive book in the Welcome Center in the newly constructed Unthank Hall. (Will Geschke/Emerald)

Students gather to eat food in the newly constructed Unthank Hall on the Unversity of Oregon campus. (Will Geschke/Emerald)

Hello. It’s me, the one and only Unthank Hall. I know that I’ve been the subject of some quality-related concerns recently. I believe in tackling criticism head on, so I thought I’d address the public about some of the rumors that have been spreading.

It all started back in December 2019, when my construction began. I was to be legendary. State of the art. Delicious. Every single room with its own bathroom? I mean, it doesn’t get much better than that. No more communal showers, awkward poops or walking down the hall just to brush your teeth.

Things started off great. I opened just in time for fall term, with room for about 700 students to move in by Sept. 23. But just the next day, there was a little incident when one of the residents tried to shower.

When first-year student Faith Bunker turned on the water, something went awry: What appeared to be drywall fell toward her from the shower head and wall. And though these (crumbling) walls cannot speak, they sure can listen. Here’s some of what I overheard about the experience.

“The drywall situation was definitely not a favorite,” Bunker said.

The following day, there was another aquatic-based mishap. And by mishap, I mean flood. Everyone was coming back from the football game, and I guess I just got excited. Well, I think we’ve all had the pipe-leaking-steaming-hot-water-into-dorm-room experience before… right?

The room’s residents were not thrilled, however.

“I had to wait on a custodian for around two hours while everyone was out partying and having fun,” first-year and Unthank resident Jackson Vandegriff said.

And I guess it hasn’t helped my emerging reputation that I’ve also had more than a few elevator problems.

“I feel like every time I move [down] past my floor I’m like ‘thank God’ because every few days [the elevator] just breaks down,” Bunker said.

I began the first week of classes hoping to restore my damaged pride, but things didn't really go as planned. Everyone had been so excited to eat at my dining facilities, the famed PNW Market, but the lines to get food seemed to be miles long. After a couple days, people had to start finding ways around them.

“Me and my roommate use Grubhub because of the lines,” another Unthank resident, Sylvia Davidow, said. “During the 5-7 [p.m.] hours, you’re typically waiting at least 30 minutes [for food].”

Employees are also struggling, including sophomore Mckenna Williams, who works at PNW Market.

“They scheduled workers for what they thought were peak hours, from 7-10 a.m., but they’re actually from 12-6 p.m.,” Williams said.

So now everyone hates me, even though none of this was my fault! You’ve heard the rumors, UO is apparently thinking of closing me to all students who don’t live here. They’re going to punish me because I’m popular? All I’ve done is run out of food a few times!

But if you think other halls have what you’re looking for, you're wrong. You think Global Scholars Hall can handle the fame? UO is literally suing the contractors of the building because the structure is “deflecting,” leaving much of the structure sitting at an angle. Don’t believe me? Ask any resident what it’s like to walk down one of the hallways. On top of that, I hear that its pasta line takes even longer than any of mine, and that’s with it being the second choice.

And no, I don’t have a buffet like Carson, but I’ve got so much else to love! You can come grab ramen from Steam (at least in theory — it hasn’t been open since week one), Mediterranean from Watershed (if we haven’t run out of shawarma), American from Duck House (if you’re willing to make your dinner a whole-day event) or Mexican from Bullseye (but let’s be honest, I’ll probably be out of either tacos, burritos, or — if you’re lucky — both!)

Some may turn to Kalapuya as a safe haven. Great choice! I mean, if burning in another microwave fire like what happened two weeks ago is up your alley. But what about Hamilton, you ask? Sorry, after celebrating its 60th birthday this year, it’s going to be torn down in 2022. Justice Bean? If prison-style rooms are the ideal, go for it. But at least they have remodeled bathrooms, right?

Oh, and Barnhart is Barnhart. There’s a reason they made it the quarantine dorm last year.

But I still feel I have my reputation to prove. With a big market, student welcome center and nine diverse food choices, I remain a valuable addition to the UO community. Just cut me some slack and give me a bit more time to adjust. I’m as new as any other first-year, and they don’t give you an IntroDUCKtion on how to be a residence hall.