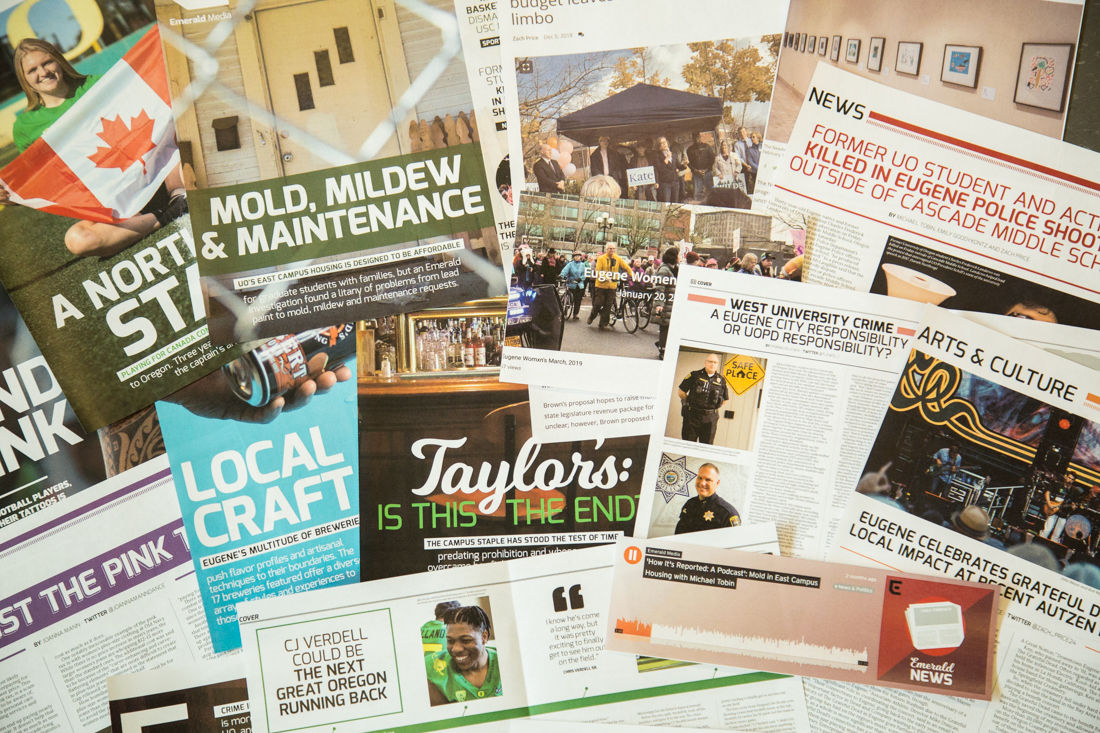 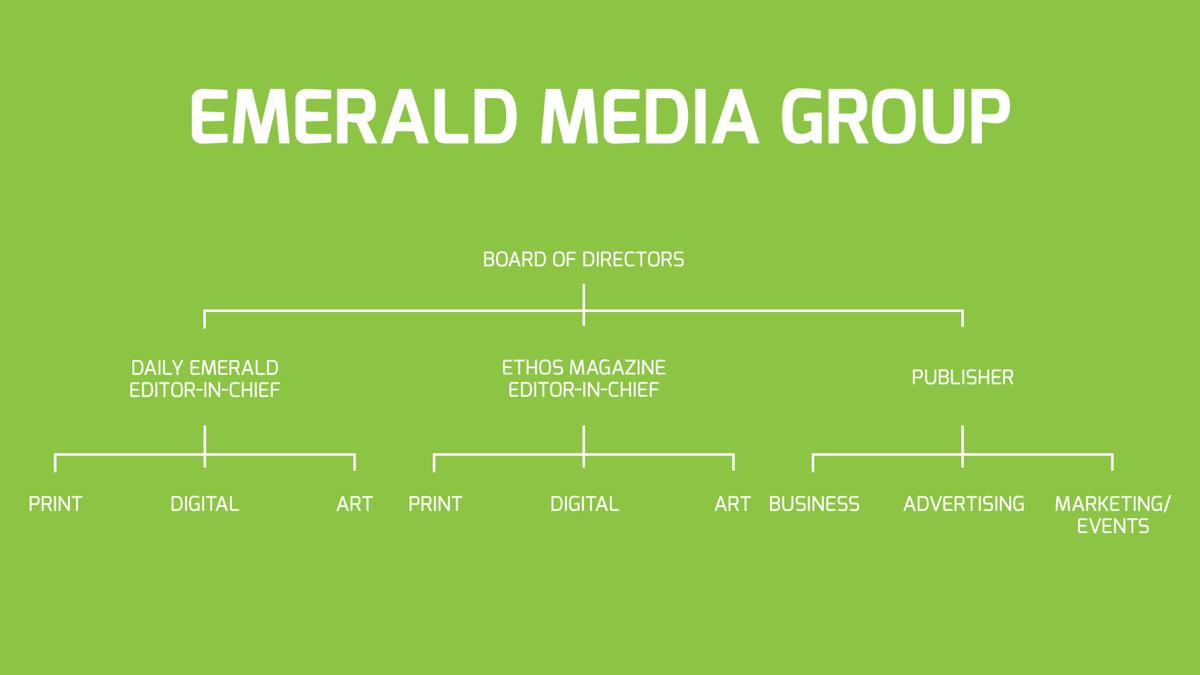 The Emerald board of directors, which is comprised of Emerald alumni, current students and members of the community, is tasked with hiring both the Ethos and the Emerald newsroom student editors in chief. 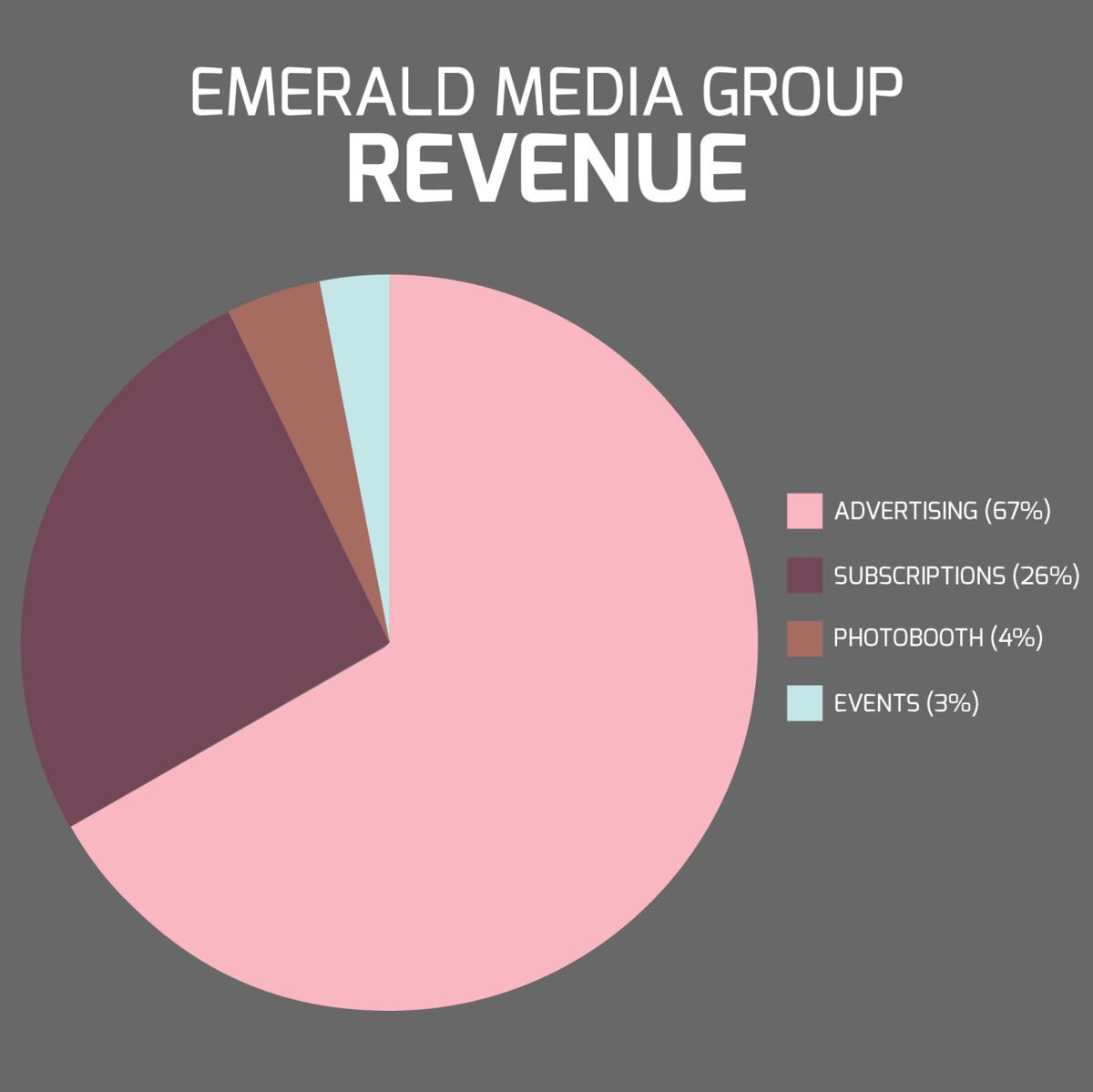 As an independent organization, the EMG is funded through advertising revenue; subscriptions from UO’s student government, ASUO; funds raised from the PhotoBooth and various sponsored events. 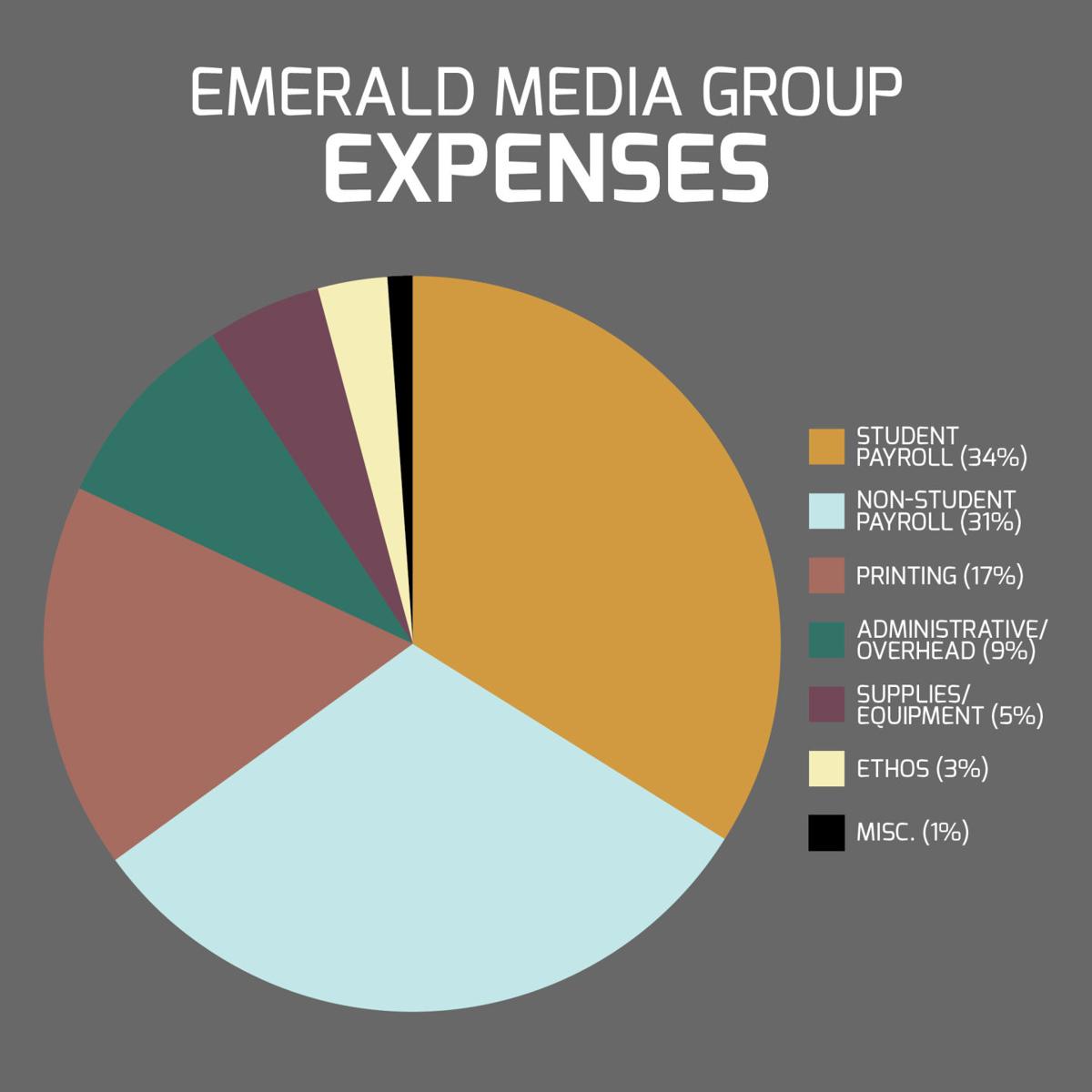 The majority of that money goes toward student and professional staff salaries, while the rest helps cover printing costs, overhead, supplies, Ethos and miscellaneous costs. 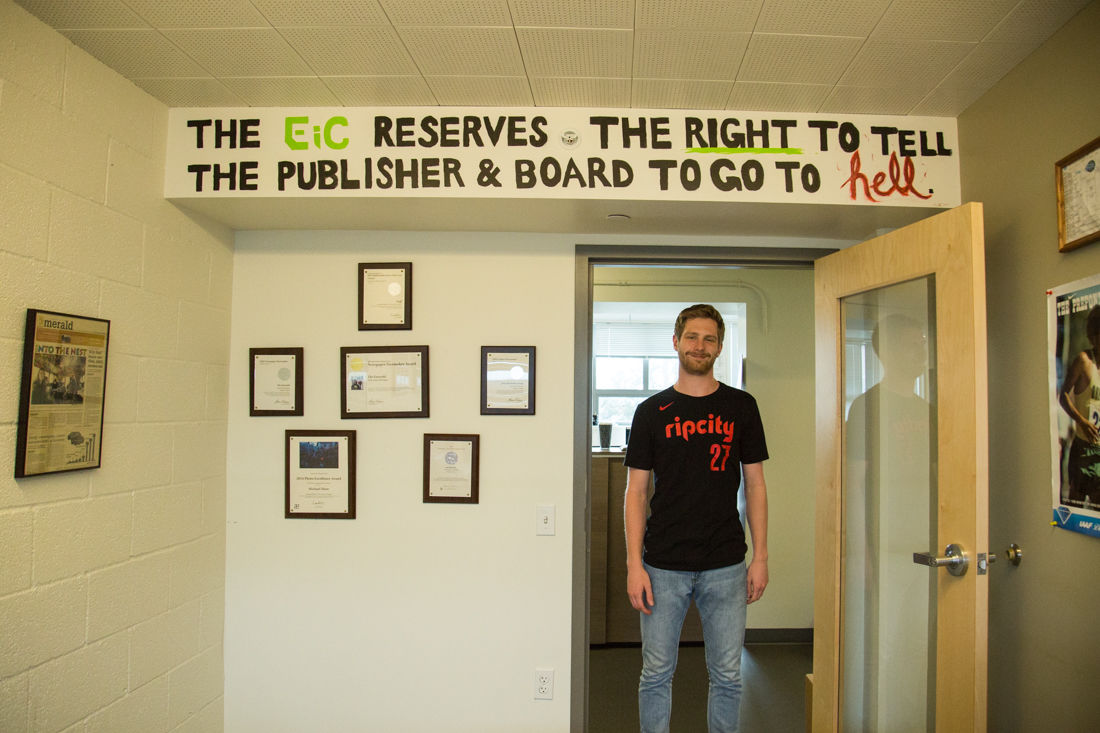 2018-19 Emerald Editor-in-Chief Zach Price stands in the doorway of his office during an all-staff meeting on April 21, 2019. (Sarah Northrop/Emerald) 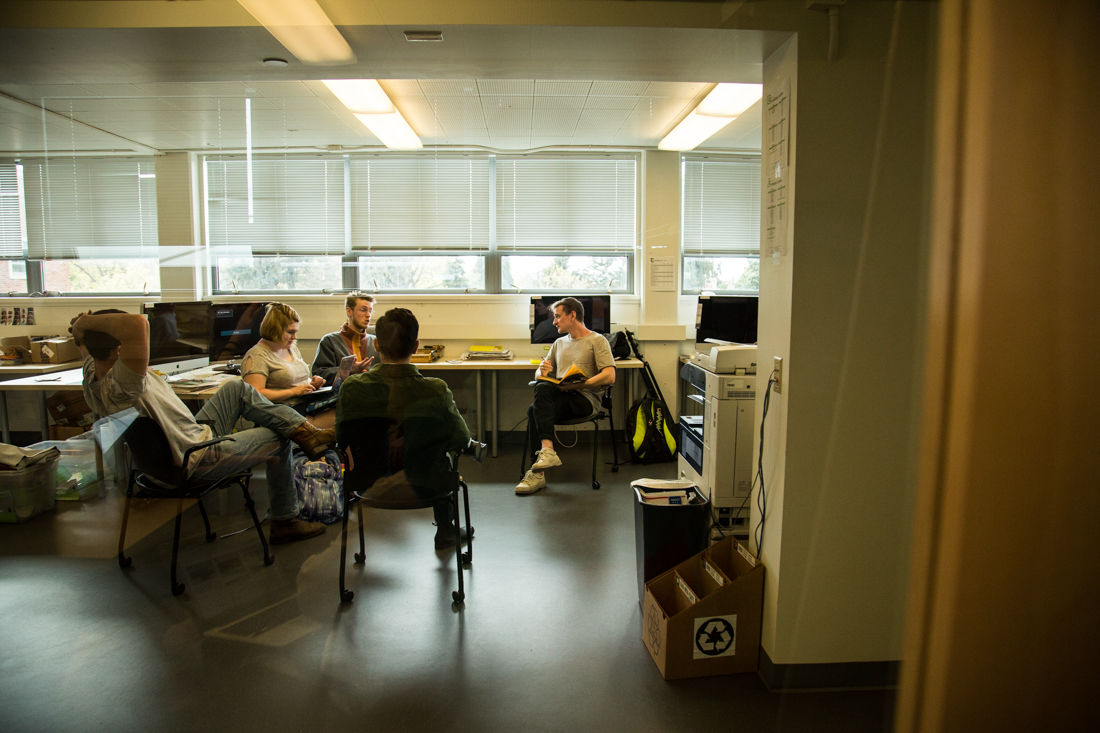 The Emerald opinion desk meets during an all-staff meeting on April 21, 2019. (Sarah Northrop/Emerald) 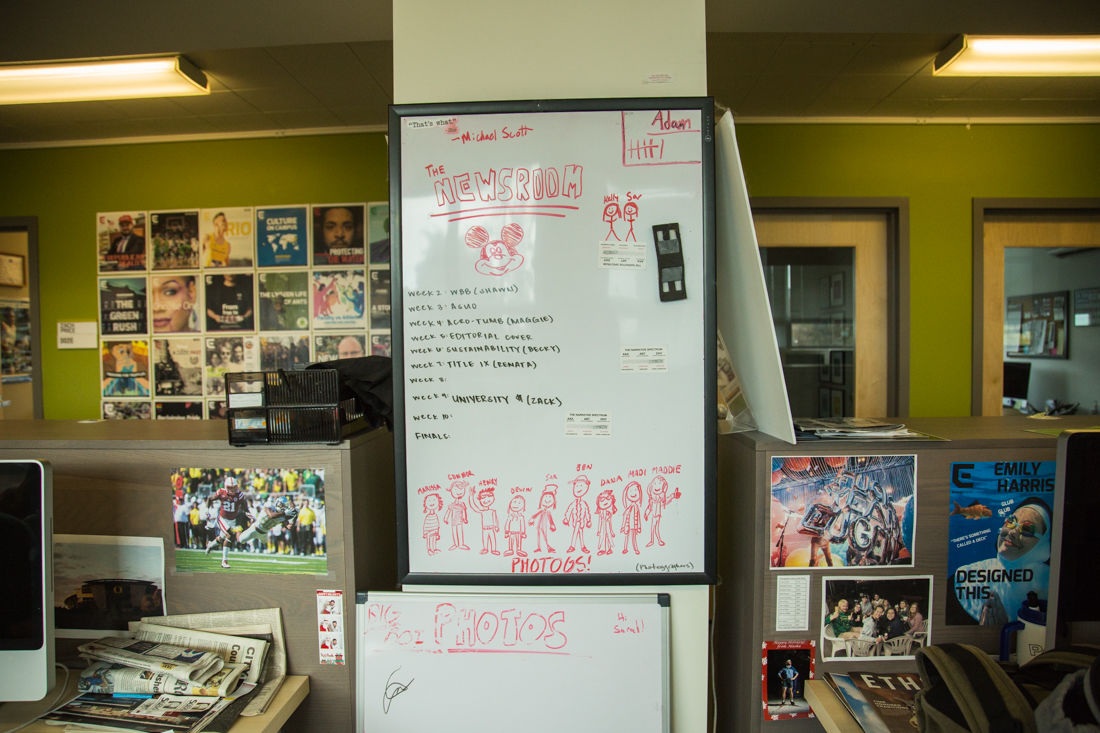 The Emerald newsroom is home to the creative energies of many student journalists. (Sarah Northrop/Emerald)

The following is the opinion of the Emerald’s Editorial Board and not Emerald Media Group as a whole. The Emerald Editorial Board exists to provide the newsroom a voice on prominent campus issues. It operates separately from the objective work of Emerald reporters, giving the organization a platform to create and continue a dialogue on campus.

At its most basic level, the Daily Emerald is the University of Oregon’s independent student newspaper. But at its core, the Emerald’s mission is threefold — Education: Train students to be industry leading professionals. Service: Serve the UO community with news, information and a marketplace. Entrepreneurship: Build an enduring independent student media company.

Being an independent student media group comes with benefits such as freedom from university oversight, which gives students an unfettered, uncensored voice on campus to hold UO accountable. Along with the benefits, there are also many challenges and obstacles that come with having a nonprofit status and being independent.

Difficulty securing funding for student staff salaries, travel costs and public records fees are just a few frequent challenges facing the Emerald. Student media newsrooms all across the country are facing similar challenges and setbacks, many of which are results of a lack of funding. Recently, some prominent student publications, including SMU’s Daily Campus, have been forced to relinquish their independence by going under the control of administration, while others have been forced to close their doors for good, such as The Central Florida Future.

To raise public awareness of this crisis and draw support to help combat it, the Emerald is joining hundreds of other college media publications across the country to participate in Save Student Newsrooms Day on April 25.

Both undergraduate and graduate students help make up the newsroom managers, editors, reporters and multimedia producers. We are a passionate community of over 80 student-journalists whose responsibility is to inform the student body of important issues and hold the surrounding institutions accountable. We are a student publication for students, by students.

As the No.1 publication for campus-related news, the reporting we do on tuition increases, graduate student strikes, community crime and campus construction is vital information for students. The vibrant blend of arts and culture reporting on the local music scene, art galleries, book and movie reviews, and the food industry introduces students to Eugene’s community of arts and local passions. From football and basketball to tennis and acrobatics and tumbling, the Emerald’s sports desk doesn’t miss a beat. And our opinion section, filled with thoughtful columnists, provides insights that help spark dialogue about campus issues.

In addition to serving our readers, we also seek to train and produce top-quality journalists ready to enter the professional field and contribute to the civic service that is the free press. The newsroom frequently hosts training from UO journalism professors and professional journalists in the community. Through a great fundraising effort last year, we were also able to send two Emerald reporters to the Investigative Reporters and Editors conference in Orlando, Florida, where they learned investigative skills they brought back to the newsroom and, ultimately, the community at large.

Throughout the 119 years of its existence, the Emerald has produced notable journalists, such as Randy Shilts and Annette Buchanan. Shilts was an openly gay journalist who extensively reported on gay rights and the AIDS epidemic in San Francisco when few other reporters would. And Buchanan’s famous refusal to give up an anonymous source from an Emerald article she wrote about marijuana use led to the passing of Oregon's Shield Law. The law protects a journalist’s right to maintain the confidentiality of their sources.

Former Emerald journalists are currently contributing to prominent newsrooms, including the New York Times, Wall Street Journal, Los Angeles Times, Seattle Times, the Oregonian/OregonLive and many more. There are also Emerald alumni who stayed in the Eugene community, making an impact at a local level while reporting at The Register-Guard and Eugene Weekly.

High-quality journalists aren’t all the Emerald produces, though — we are also journalism industry innovators. The Emerald strives to be at the cutting edge of digital initiatives and developments to reflect the ever-changing medium and mode of media in which our audience consumes it.

Through photos, videos, podcasts, newsletters and graphics, our multimedia desks produce content that complements our written reporting and suits the varying needs of our audience. This innovation also allows us to open more training opportunities to those who want to get involved in media, but aren’t interested in traditional reporting and writing.

The Emerald newsroom is just one aspect of a larger nonprofit media organization, the Emerald Media Group, which serves as an umbrella for many of our sister publications, including Ethos, the quarterly multicultural magazine; Essentials, the special sections publication; the Emerald PhotoBooth; the creative department and the business department.

Together, all these publications and departments work to maintain an independent voice for UO students.

Outside of the three professional staff members, who dedicate their livelihoods to doing the behind-the-scenes work supporting and guiding the organization, the Emerald is entirely run by students. The editors in chief answer to no one besides the Emerald board.

As an independent organization, the EMG is funded through advertising revenue (67%); subscriptions from UO’s student government, ASUO (26%); funds raised from the PhotoBooth (4%) and various sponsored events (3%). The funds from the subscriptions come from the Incidental Fee paid by students that ASUO allocates to student groups without university oversight.

The majority of that money goes toward student and professional staff salaries (65%), while the rest helps cover printing costs (17%), overhead (9%), supplies (5%), Ethos (3%) and miscellaneous costs (1%).

Just like nearly every media publication, the Emerald is facing a decline in print advertising revenue and is struggling to adapt to the many uncertainties of online advertising. A decade ago, the Emerald printed five days a week. Today, it’s printed weekly.

Our professional staffers, student sales manager and student account executives are doing everything within their power to combat the revenue losses that come with shifting to a digital business model.

With limited resources and without the safety net of administration to catch any potential fall, the Emerald has faced significant budget cuts over the last few years. The limited number of Emerald employees who receive monthly stipends has decreased significantly due to a shrinking newsroom payroll budget.

Being a journalist is a time-consuming practice — not all students interested in working at the Emerald have the ability to do so. Trying to juggle their Emerald responsibilities with a full load of high-cost classes, a potential second job and still attempt to have some sort of social life isn’t easy. For some, working at the Emerald isn’t a possibility without a meaningful form of compensation, which we can’t always offer.

The cutbacks also affect our travel budget, which is currently non-existent. As mentioned, part of the Emerald’s mission is training. And for sports reporters and photographers, traveling to cover games is an important part of learning what it takes to do professional sports coverage. Luckily, we were able to raise enough money to send reporters and photographers to cover the UO men’s and women’s basketball teams at both NCAA tournaments this year.

But for many of those student-journalists, the trip meant fronting the money for flights and hotels without any guarantee that they would be reimbursed.

Declines in print revenue have led to cutbacks in payroll and the newsroom travel budget, but no threat was greater than when ASUO, facing a budget crisis of their own, considered pulling funding for the newsroom while setting their annual budget earlier this year. If you recall, that money accounts for 26% of the EMG’s total revenue, most of which is allocated to newsroom student staff salaries. But the newsroom banded together with our professional staff and sister publications to argue why the Emerald is essential to students, leading ASUO to later fully funding the EMG, with a 3 percent increase from the previous year’s allotment.

Although we were successful in obtaining the funds for another year, the incident served as a sign that similar challenges may be on the horizon in the near future. We realized that we must be proactive in ensuring the long term viability of this organization.

How you can help

As a nonprofit, the EMG is eligible for several state and national grants that could help curb the obstacles of declining revenue long enough for us to land on our feet with a stable digital model. Those grants are selective and competitive. We are pursuing that route, but work needs to be done now while we are realigning our resources toward that goal.

The number of supplies we have for our photographers and videographers is small, which limits the people who want to gain experience in those fields to students who can afford expensive and costly equipment.

To help open the opportunities for students to contribute to the Emerald’s photo and video team, we are asking for our alumni, readers and extended Emerald family to donate towards a goal of $3,500 that will go toward camera equipment.

To donate, visit dailyemerald.com/donate or Venmo us @EmeraldMediaGroup. Any donation large or small supports independent student journalism and helps ensure that the Emerald continues to be a voice for students at UO for a long time to come.