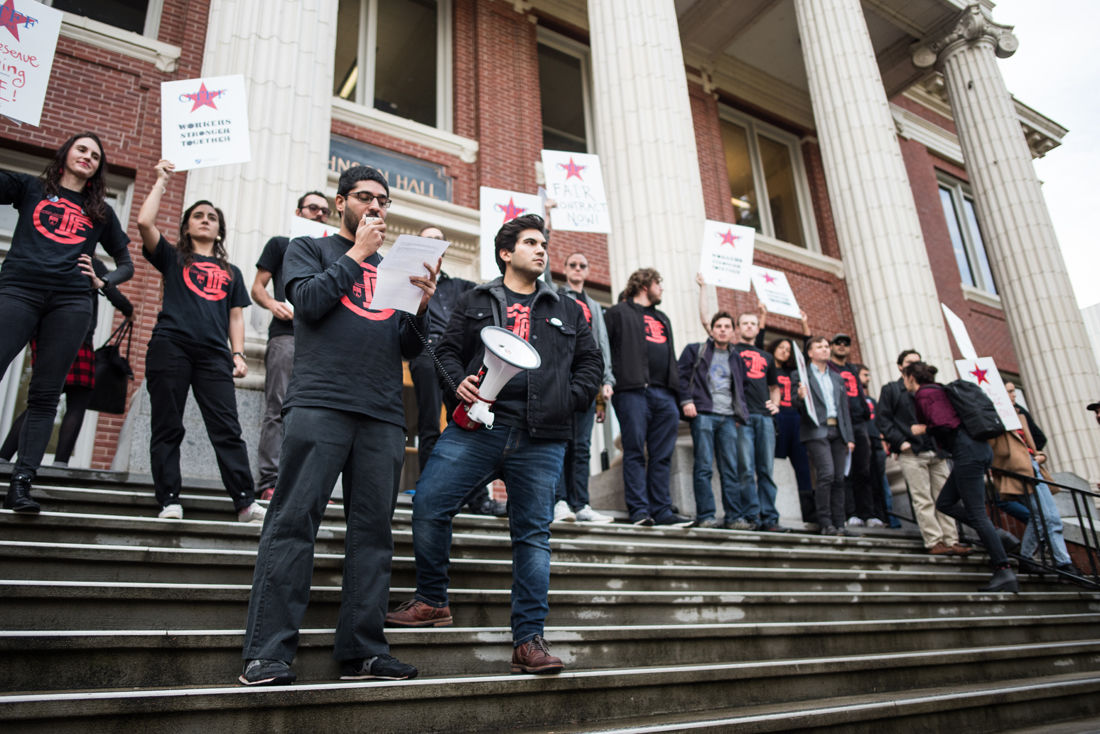 Rajeev Ravisankar, a University of Oregon GE as well as VP for external relations at GTFF, speaks on the stairs of Johnson Hall. Following the vote to authorize a strike, the Graduate Teaching Fellows Federation holds a rally to demand a fair contract at Johnson Hall on Oct. 18, 2019. (Marissa Willke/Emerald) 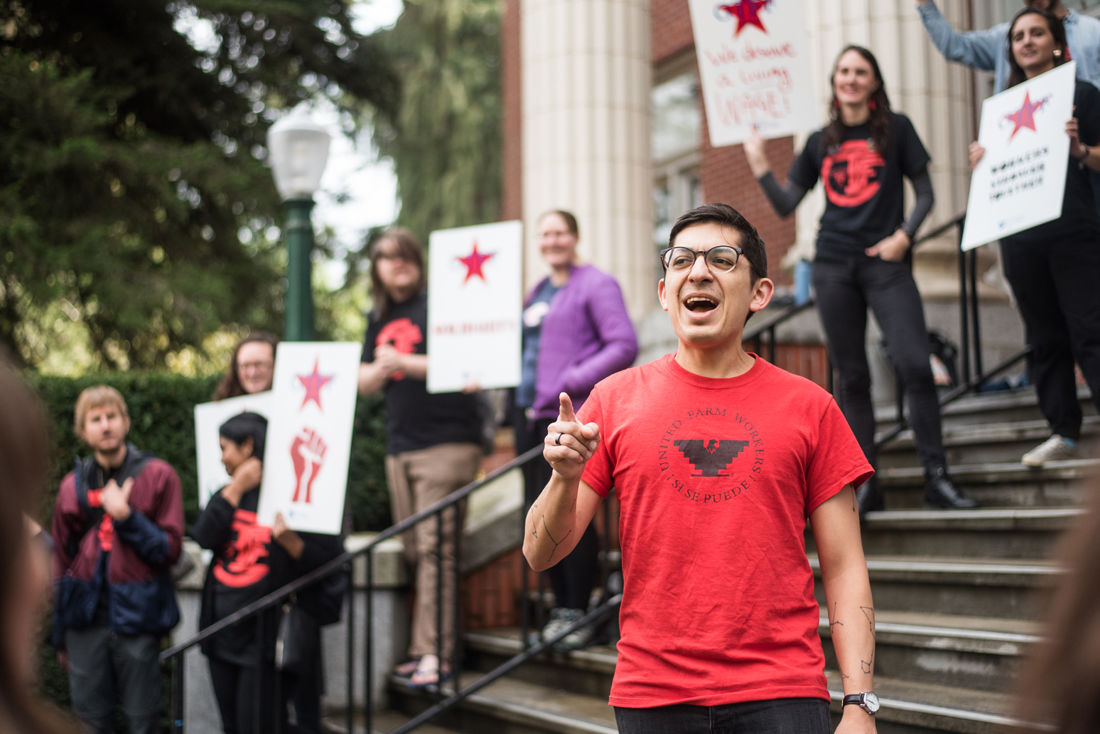 Ricardo Friaz, GE in the Department of Philosophy, has the crowd repeat after him so everyone can hear his speech after GTFF is told they can no longer use a megaphone at the rally. Following the vote to authorize a strike, the Graduate Teaching Fellows Federation holds a rally to demand a fair contract at Johnson Hall on Oct. 18, 2019. (Marissa Willke/Emerald) 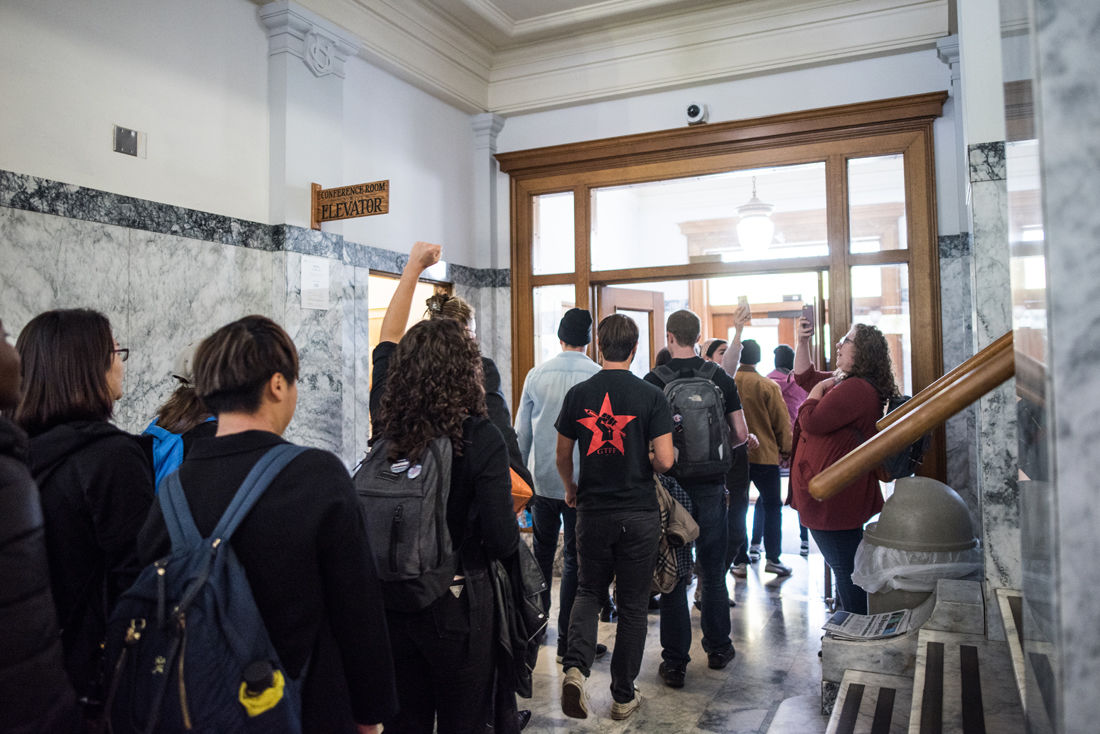 GTFF members lead attendees through Johnson Hall while chanting. Following the vote to authorize a strike, the Graduate Teaching Fellows Federation holds a rally to demand a fair contract at Johnson Hall on Oct. 18, 2019. (Marissa Willke/Emerald)

After nearly a year of bargaining for a new contract, and both sides coming closer to an agreement last Friday, the University of Oregon and its graduate employee union still aren’t out of the woods.

On Oct. 25, the Graduate Teaching Fellows Federation gave an official 10-day notice that it may strike. Though the notice does not mean that the union will definitely strike, it’s the latest step in the union’s nearly 12 months of bargaining with the university.

Late Friday night, the UO and GTFF put out a joint statement saying that they “had the most productive meeting that we have ever had bargaining late into the evening” and that they “hope to complete work on the agreement when they meet again” on Tuesday, Oct. 29.

This isn’t the first time that the GTFF has wanted to strike, and if a contract isn’t settled, nor would it be the first GTFF strike in recent memory.

In December 2014, the union went on an eight-day strike, calling for higher wages and paid leave. A first in the GTFF’s over 40 years of existence, the strike ended after the university and the union agreed on raising minimum wages by 5%. They also created the Graduate Student Assistance Fund, a pool of money that GEs can tap into if they have a new child or a sudden medical need.

GEs teach a significant portion of discussion sections and labs, and in some cases lectures, according to a GTFF statement.

Every few years, the union represents UO GEs in bargaining their contract, also called the Collective Bargaining Agreement, with the university. And after nearly a year of negotiations, the GTFF is ready to strike if it and the university cannot reach a deal.

The graduate employee union would strike on Monday, Nov. 4, at the start of week six. Now, the day of that potential strike approaches, with only a week remaining.

“We know that a strike is our most powerful tool, and we’re only using it when absolutely necessary,” GTFF Vice President of Political Education Sarah Stach said. “It’s not something we take very lightly, and it’s not something we’ve been hoping to do it at all.”

How did we get here?

The GTFF’s last contract expired at the end of March 2019, and the university has been extending its terms until they settle a new contract. Over the last year of negotiations, the union and UO have been unable to settle on a contract after rounds of proposals and counter-proposals, with disputes centered around health insurance and cost of living adjustments.

September and October 2019 have been the most eventful months of the nearly 12 months of bargaining.

In late September, the GTFF and UO were at a stalemate in contract negotiations. At that point, they had already been bargaining for 10 months without having settled on a contract, and the union declared an impasse — a period of contract negotiations forcing both the union and university to submit their last best offers to the Oregon Employment Relations Board, which mediates labor disputes.

The filing of those last offers, in addition to their cost summaries, begins a 30-day “cooling-off” period, during which each side considers the others’ terms.

“We obviously wanted there to be a discussion among all members prior to a vote,” GTFF spokesperson Rajeev Ravisankar said, explaining that the GTFF hosted a general membership meeting, attended by about 350 people. “That was really supposed to be a space for rank-and-file members to have an opportunity to say whatever they wanted. There we had an early indication that a lot of people were favorable towards a possible strike authorization.”

More than 95% of GEs voting on the authorization approved a strike in a union-wide vote about two weeks ago, on Oct. 17.

“The university values the vital work our graduate student employees provide in support of the UO academic and research mission,” spokesperson Kay Jarvis said of the GTFF after it filed a 10-day strike notice. “Negotiations continue and we are hopeful an agreement can be reached soon.”

This tension isn’t unique to GEs at UO. Just last month, Service Employees International Union Local 85 — one of the unions representing UO’s classified employees — also wanted a strike, which would have begun on the first day of fall term but was averted after the union reached a tentative deal with the university.

Related: “Closing the deal,” the Emerald’s coverage of SEIU bargaining

How is GTFF bargaining related to health care?

Health care has been the main dividing issue between UO and the GTFF, GTFF President Ellen Gillooly-Kress said.

The main disputed point is how much the university would contribute to GEs’ health insurance plans, Gillooly-Kress said, a figure which currently stands at 95% for most GEs, with the remaining 5% being split among the premiums that GEs pay. (Premiums are the fees that insured people pay for medical coverage, according to the U.S. Bureau of Labor Statistics.)

“The only thing that we're bargaining over is the university's contribution to health insurance,” Gillooly-Kress said in regards to GE health care. She added that expectations of inflation of medical inflation rates — along with the “terrible, awful system of corporate health insurance” — mean that UO’s proposals are “way under any kind of reasonable expectation of inflation.”

Yet, things may be looking up for the GTFF in terms of health insurance. At an Oct. 25 bargaining session, the union and the university say that they have had the most productive bargaining session ever — particularly regarding health care.

“The biggest point of difference, health insurance, has been tentatively resolved pending reaching agreement on a full package,” the GTFF and UO bargaining team wrote in a joint statement. “The parties hope to complete work on the agreement when they meet again on Tuesday.”

“We firmly believe that we can’t be good educators if we don’t have the means to support ourselves,” Stach said.

What are the numbers on the table?

According to the GTFF website, the final salary offers made by the union are 3% increases in minimum salaries to keep up with inflation, and 1.5% increases for all other salaries over each of the next three years.

“It's not even a raise necessarily,” Gillooly-Kress said of the 3% increase. “It's just to make sure our buying power doesn't shrink.”

The UO’s offer is a 2.5%, 2.75% and 3% increase for minimum GE salaries for years one, two and three respectively, with a 1.5% increase for salaries above minimum over the three years.

What would happen to classes?

The university is still trying to plan for what professors should do in case of a strike.

In late April 2019, the University Senate — a UO governing body of professors, administrators, staff and students that makes decisions related to academics — approved a plan for just that: the “academic continuity plan.” It would give faculty, and not the administrators, the responsibility of giving out emergency grades.

The specific senate committee in charge of that plan, the academic council, is working on updating that plan for a potential upcoming strike.

“Due to the union’s strike authorization vote, the Academic Council is developing coverage options to preserve the academic integrity and learning objectives of current courses during any disruption to academic operations caused by a strike,” Jarvis said in a statement. “The Office of the Provost, Office of Research and Innovation, and Employee and Labor Relations are also working closely with units on continuity planning.”

But GEs have criticized the original draft of the plan for comparing unpreventable and sudden natural disasters to labor union strikes as examples of academic disruption.

“It looked to us a way to either introduce what is called ‘scab labor,’ which is labor that is non-unionized that's to replace unionized work, and/or undermine our power as instructors of record to give grades,” Gillooly-Kress said of the plan from last April.

What would happen to GEs?

GEs, who are not paid while on strike, according to the UO human resources webpage, are not required to go on strike if the union calls for one.

“I deeply care about taking care of myself and being able to afford my own health insurance, so I can be there to support everybody in my acting classes,” said Gillooly-Kress, who is also a Ph.D. student studying theatre arts.

Stach has been working in maintaining community relations with the union and educating members about current union events.

“Most recently, I've been working with members on talking to their students about what it would mean to go on strike,” she said.

Stach said she's encountered a lack of in-depth knowledge about what's transpiring in the strike situation. “When I've talked to people, they either don't really know what's going on,” she said, “or they’ve heard that the university is bargaining with some of its employee groups, but they’re not quite sure of the details.”