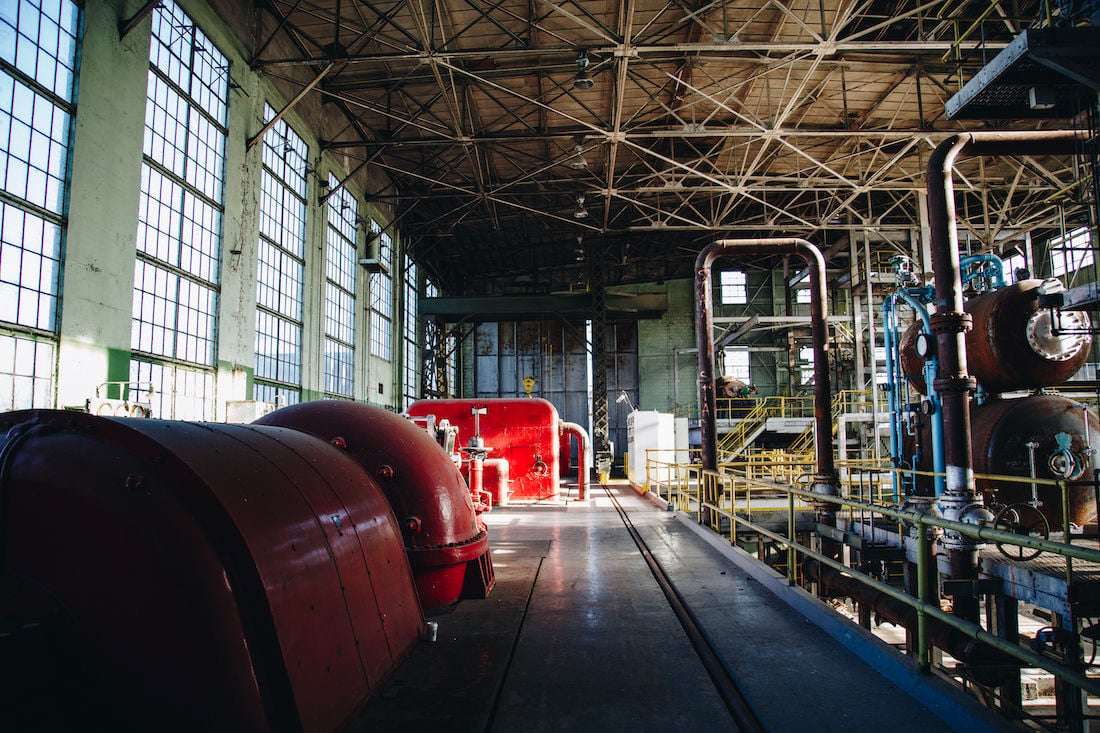 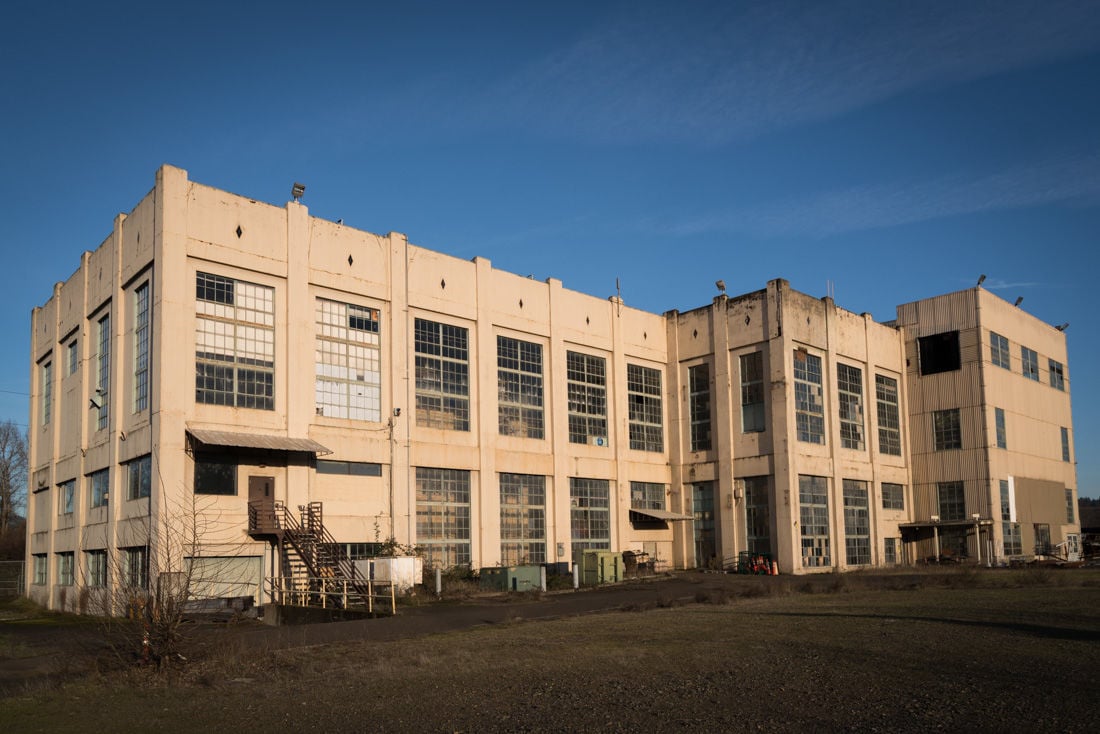 Eugene Water and Electric Board's retired steam plant is the future sight for a new development along the Willamette riverfront. (Dana Sparks/Emerald) 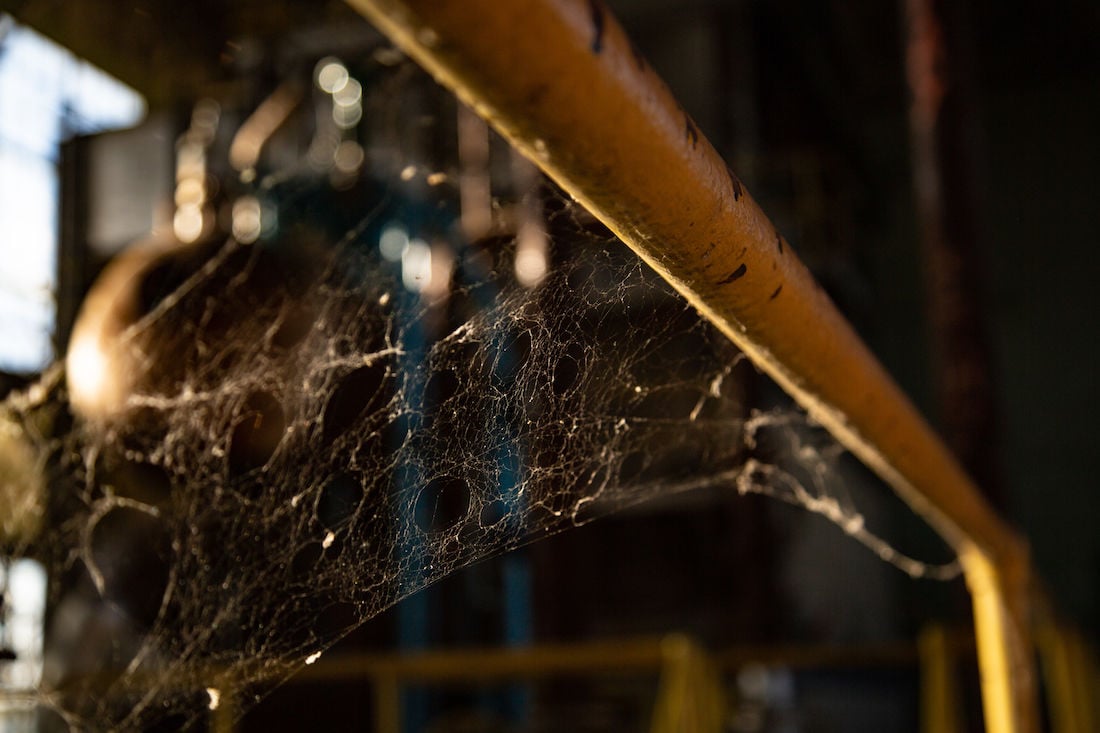 Seven years of cobwebs and dust are accumulated inside the abandoned steam plant. Eugene Water and Electric Board's retired steam plant is the future sight for a new development along the Willamette riverfront. (Sarah Northrop/Emerald) 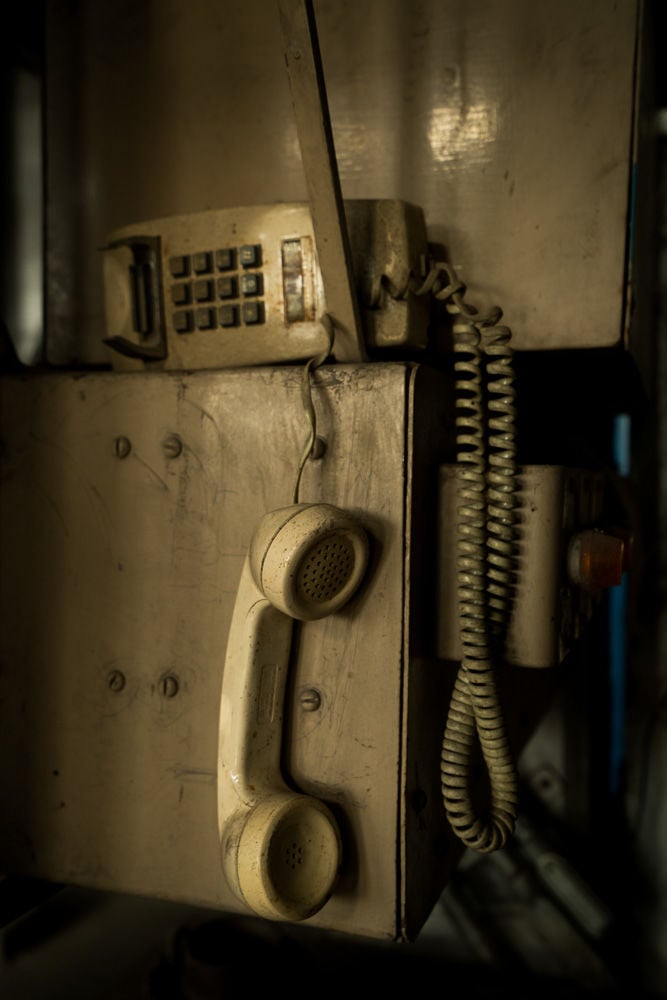 An old phone hangs off the hook on the bottom floor of the workspace, adding to a feeling that the last day at the plant was as sudden as just leaving work for the day. Eugene Water and Electric Board's retired steam plant is the future sight for a new development along the Willamette riverfront. (Dana Sparks/Emerald)

Perhaps no one has explored Eugene’s historic steam plant as thoroughly as K Pound.

K Pound, a black cat named after the unit of measurement for steam output, grew up in the oldest-standing structure on Eugene’s downtown riverfront property: the Eugene Water and Electric Board Standby steam plant.

When the steam plant closed in 2012, K Pound needed a new place to live. Jeannine Parisi, the community and local government liaison for EWEB, brought K Pound home, where he’s lived ever since.

“He had been cared for by the skeleton crew,” Parisi said. “It was a 24-hour facility, so he was a quirky animal that didn’t know that humans slept. He also had a particular affection for Cheetos, which I suppose the guys fed him out of their lunch boxes.”

But now K Pound’s old home may evolve into something new.

In March 2018, the Eugene City Council began the process of organizing the redevelopment of the steam plant, which has been vacant since the facility closed in 2012. The steam plant project is part of the 16-acre downtown riverfront redevelopment that the city hopes to finish by 2021.

“It will be a heavy lift to get the steam plant back to life,” Parisi said. “It lacks the most basic building systems like heating and needs to brought up to standards.”

In August 2018, the city selected a group of local developers, architects and business executives to present a project proposal. The team includes the Portland-based deChase Miksas Development, Eugene-based electric vehicle company Acrimoto and the Technology Association of Oregon.

According to a historical report by the city of Eugene, the steam plant was innovative for generating electrical power by pumping water from the Willamette River to Eugene’s first water treatment plant. Starting in 1962, the steam plant provided heating to downtown Eugene businesses.

“We want to plot a course for Eugene’s future,” Sayre said. “But we have to honor the past, and we can do that by bringing to life certain components of the existing structure.”

A proposal, complete with digital renderings and project plans, is available for public comment in the upcoming weeks through a series of community events and an online survey.

“We're doing a series of listening sessions. We’re also doing a huge social media push to encourage people to give us their feedback on this initial concept vision,” Sayre said.

While the challenge of redeveloping a 1930s building meant for industrial work may be a large task, it comes as a welcome challenge to a city that thinks the space is currently underutilized.

Amanda D’Souza, a business analyst for the city of Eugene, says the city had its eyes on the steam plant for years, yet the list of potential pitfalls is long.

“It will require significant financial investment to make it safe and functional,” D’Souza said. “The steam plant presents a new set of challenges unlike any we’ve seen here before. It will have to be seismically retrofitted, utilities fixed up for a change of use, reinforced, and potentially more mitigation of hazardous materials.”

Regardless of risk or investment, the steam plant and its surrounding property remain instrumental for the completion of the larger riverfront development plan. D’Souza says the steam plant is a historical marker that connects the contemporary community with its industrial past.

“The steam plant is an iconic piece of Eugene’s history and is ripe with potential,” D’Souza said. “It will be a draw for people from all corners of our community.”

Students have a chance to hear from developers and designers involved in the steam plant project on Friday, Feb. 8 in the EMU’s Redwood Auditorium at 5:30 p.m., when TAO is hosting “Ignite,” which features quick five-minute talks from local industry professionals.

D’Souza says that so far, around 400 public comments have been received by the city.

“Overall, the public response has been positive,” D’Souza said. “People are excited to have this be a community beacon. They want to have a beer on the river and can see the potential this building has.”

MORE: View the Emerald's photo gallery from inside the abandoned steam plant here