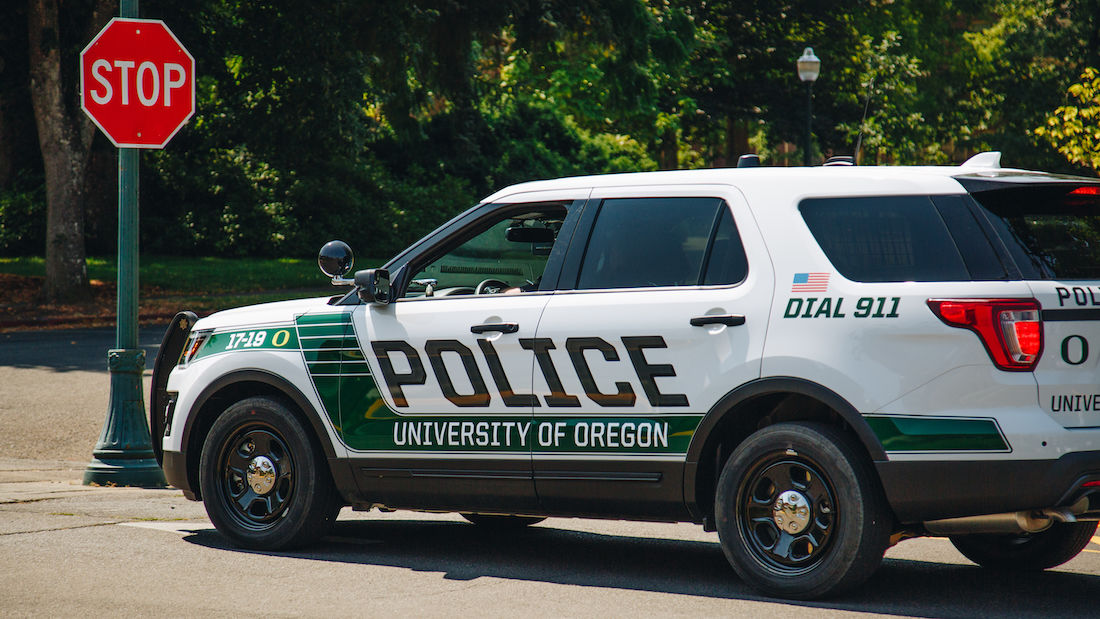 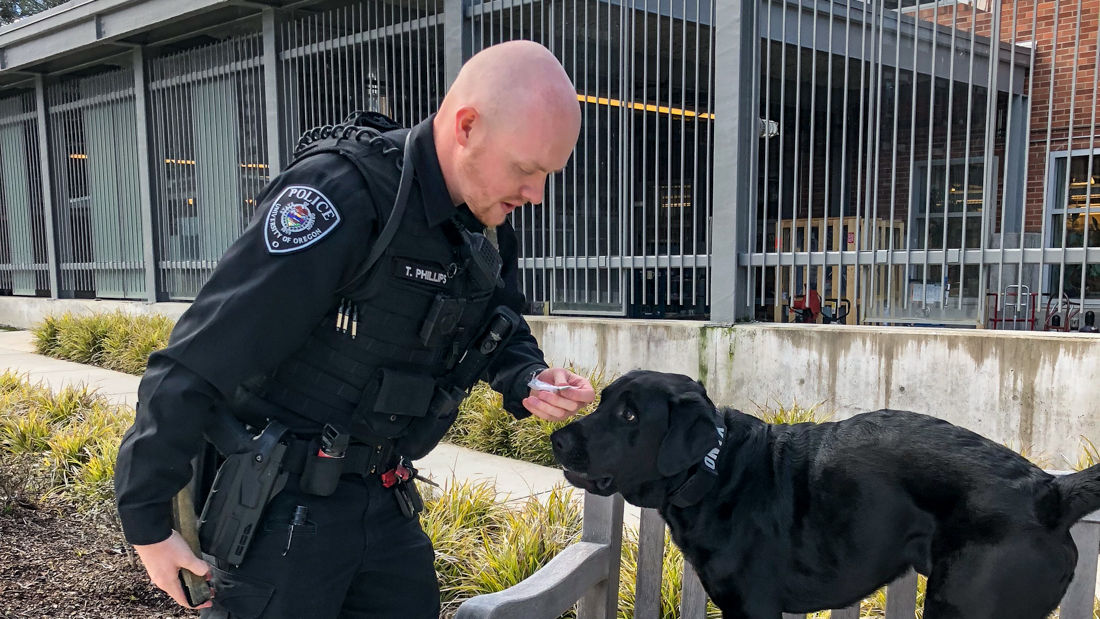 A University of Oregon Police Department officer was terminated for cause last October for violating the department’s use of force policy, omitting information and providing false information in a police report and in court testimony, according to personnel records obtained by the Emerald through a public records request.

UOPD Chief Matthew Carmichael began an internal investigation into five allegations of misconduct against Officer Troy Phillips, UOPD’s canine handler. The investigation began after Eliborio Rodriguez filed a tort claim notice against UO following Phillips’ arrest and detention of Rodriguez in October 2018 for an alleged traffic violation for which he was later acquitted, according to an external report done by Rick Wall and Associates, an independent consulting and investigation firm. A UO spokesperson said there has been no resolution to the claim and that no litigation was filed against the university.

UOPD’s investigation sustained four of the five findings against Phillips, who violated UOPD’s use of force policy by using force “as a de-escalator” when he exited his vehicle and immediately drew his gun on Rodriguez. The investigation also found that he was not truthful in his police report or his testimony in municipal court and “omitted facts that would be considered exculpatory in nature.”

“Troy Phillips is no longer with the University of Oregon Police Department. Mr. Phillips was separated for cause last year, following an internal investigation,” UO spokesperson Kay Jarvis said in a statement to the Emerald. “The University holds all its police officers to the highest standard when it comes to integrity and trustworthiness, as the public and our campus community expects.”

The internal investigation also found that Phillips failed to document audio and video footage in his report and did not acknowledge the existence of the footage after an inquiry from the municipal prosecuting attorney before Rodriguez’s trial.

The UOPD review of Phillips’ past arrest reports found none of them included the recordings when they existed as required by UOPD policy. A review of three other officers’ arrest reports found all the video and audio recordings were documented and that failing to include them was not a systemic issue within UOPD, according to UOPD’s investigation.

The fifth allegation was redacted and the investigation found that it was not sustained.

Personnel files are generally exempt under Oregon Public Records Law; however, the UO’s Office of Public Records said that “as this involved a sworn peace officer in a circumstance where the public trust, interest and safety takes precedence, the University deemed it in the public interest to provide the record.”

Rodriguez, whose name is also spelled as Rodrigues, was killed by Eugene police in November 2019, Lane County District Attorney Patricia Perlow confirmed to the Emerald. Perlow deemed the shooting justified in December 2019.

On Oct. 28, 2018 at about 10:45 p.m., Phillips was driving northbound on Agate Street, coming from East 15th Avenue, when he said he witnessed Rodriguez, who was riding his bicycle in the bike lane, make an abrupt lane change in front of Phillips, forcing him to stop to avoid a collision, documents show.

“This speaks to the multiple opportunities you were given to tell the truth, state the obvious, and you failed to do so,” Carmichael said in his report addressed to Phillips.

Rodriguez then dismounted from his bike and walked across the crosswalk to the other side of the street without stopping for oncoming traffic — which Phillips deemed a traffic violation.

Phillips noted in his police report that Rodriguez was making “jerky, sharp movements” because the items in his hands prevented him from having full control of the bike — another detail that UOPD’s internal investigation proved to be false after reviewing Phillips’ patrol footage.

Phillips then followed Rodriguez, turning on his emergency siren in order to get him to stop. He used his PA system to get Rodriguez’s attention and said, “Police. Stop.” In his report, Phillips said Rodriguez “physically reacted” to his siren and “looked at me as though it was clear he understood I was pursuing him.” Phillips also said that Rodriguez took 15 seconds longer than usual to pull over, stating “‘that most traffic violators stop within three seconds.’”

The patrol car camera footage showed that Rodriguez did not react to the siren, the report shows. But that’s not unusual: a review of traffic stops conducted by Phillips showed that violators took, on average, 18 seconds to stop, documents show.

Phillips requested additional officers to report to the scene to assist him when Rodriguez did not stop, hailing Officer Luke Sitts for assistance. Both officers pulled over next to Rodriguez and Phillips immediately approached him with his firearm pointed at him, in what he described as an effort to “de-escalate” the situation.

Rodriguez, who straddled his bike and held up both hands to shoulder level, was holding a bag in one hand and a speaker in the other. He said he had not heard Phillips because he was listening to music from his speaker. Phillips omitted from his police report the fact that Rodriguez had both hands above his head, documents show.

At this point, Phillips noticed that Rodriguez was wearing a sheathed knife around his waist. Phillips said that he feared for his safety at this point, causing him to ask Rodriguez to get down on the ground several times.

According to the consultant’s report, Rodriguez’s “actions did not form the basis for a reasonable officer to opine that these actions were threatening.” UOPD’s investigation found that Rodriguez was lawfully in possession of the knife.

Rodriguez said multiple times that his knife was in its sheath and that he wanted to see Phillips’ supervisor. Phillips threatened to use his taser, and 40 seconds after stopping Rodriguez, Phillips tackled him to the ground, documents show.

Phillips stated in his police report that after he tackled Rodriguez, Rodriguez reached for his knife and resisted arrest. Chief Carmichael’s report cited that Phillips’ patrol car footage and body camera footage showed Rodriguez complying with Phillips and did not resist or reach for his knife.

During the incident, Phillips told Officer Sitts to “go lethal,” according to UOPD’s internal report. In an interview following the incident, Sitts said, “I didn’t feel like he was presenting any threat to me at that point as he was verbally engaging with Officer (Phillips) and directing his attention towards him.” But he said he thought it was “very reasonable” that Phillips use a low level of force to to take Rodriguez into custody to prevent him from fleeing to an area with a high student population.

Carmichael’s investigation found Phillips’ use of force against Rodriguez “not only unreasonable but also troubling.” Phillips had been an officer for four years and three months and attended almost 1,700 hours of training, but the investigation said that Phillips “made no attempt to resolve this incident through any sort of de-escalation techniques consistent with [his] training and department policy.”

The trial and internal review of the incident

After Rodriguez was arrested, Phillips failed to include the video footage from the arrest in his report, in addition to omitting information and providing false statements about the arrest and the use of force, according to UOPD’s investigation. This is against UOPD’s policy to provide investigative information.

The consultant’s report says that Phillips did not include the recording in the report because the patrol car video began automatically recording when he turned on his emergency lights, so his supervisors should have known that it existed. The consultant’s report says that while that may be accurate, it is “improper” to assume that others outside of law enforcement know how the system works.

“The fact that it can be argued that this video contained exculpatory evidence and was not shared with the defense, or even the prosecution for that matter, raises credibility issues with the report as well as Phillip’s explanation for the events,” according to the consultant’s report.

The prosecuting attorney asked Phillips if video footage from his patrol car was available, documents show, but Phillips did not respond to the email. Phillips said in internal interview that he did not have to answer the email because it was “just a notice” that Rodriguez’s trial was about to start. He appeared in court and testified about the incident and report on Jan. 24, 2019, the consultant’s report states.

Eugene Assistant City Prosecutor Doug Worley and Eugene Municipal Court Judge Richard Fredericks later reviewed the footage and each independently determined that the incident documented in the video footage did not match with the description of the arrest Phillips gave in his police report or court testimony, according to the UOPD investigation. UOPD’s internal investigation concluded that Phillips “provided false or misleading information while providing testimony in this matter.

After Phillips reported false information multiple times throughout the trial and did not disclose the patrol car camera footage, he was found to be in violation of UOPD’s policies and terminated from the force.

Gina is an associate news editor for the Daily Emerald. She used to cover crime and courts and loves a public record. Send tips and pictures of puppies: [email protected]