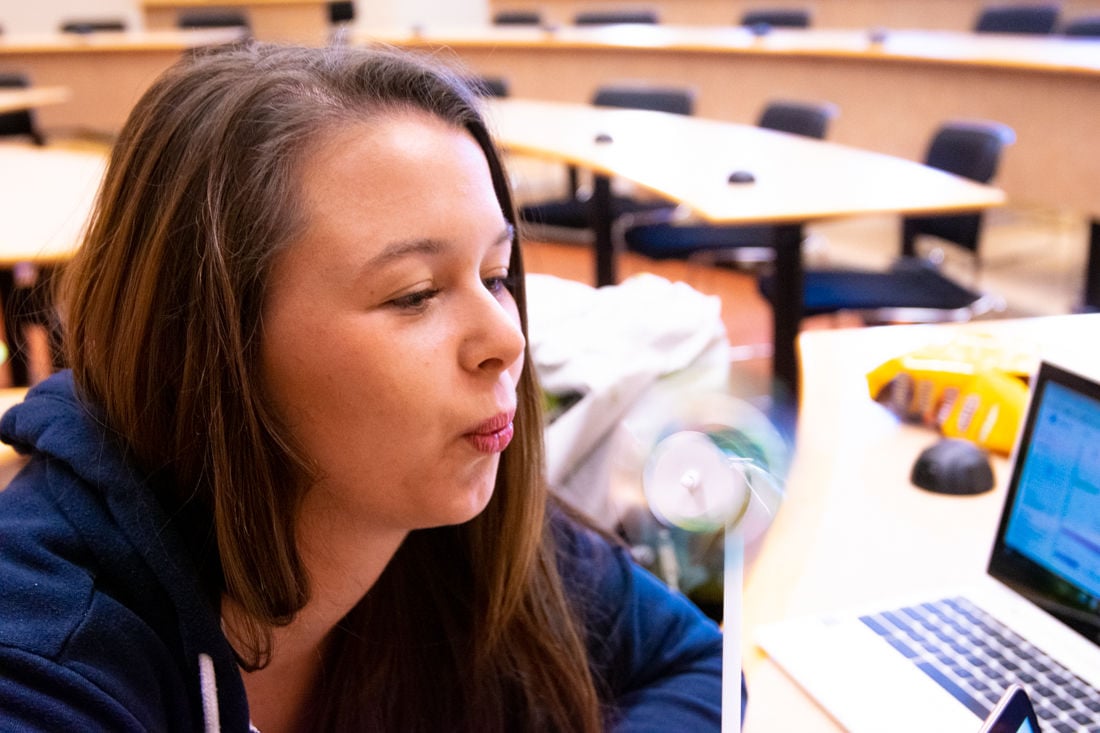 Abbigail Hepperle, UO's 90by30 club organizer, blows on a pinwheel that is a symbol for the 90by30 organization. (Kimberly Harris/Emerald) 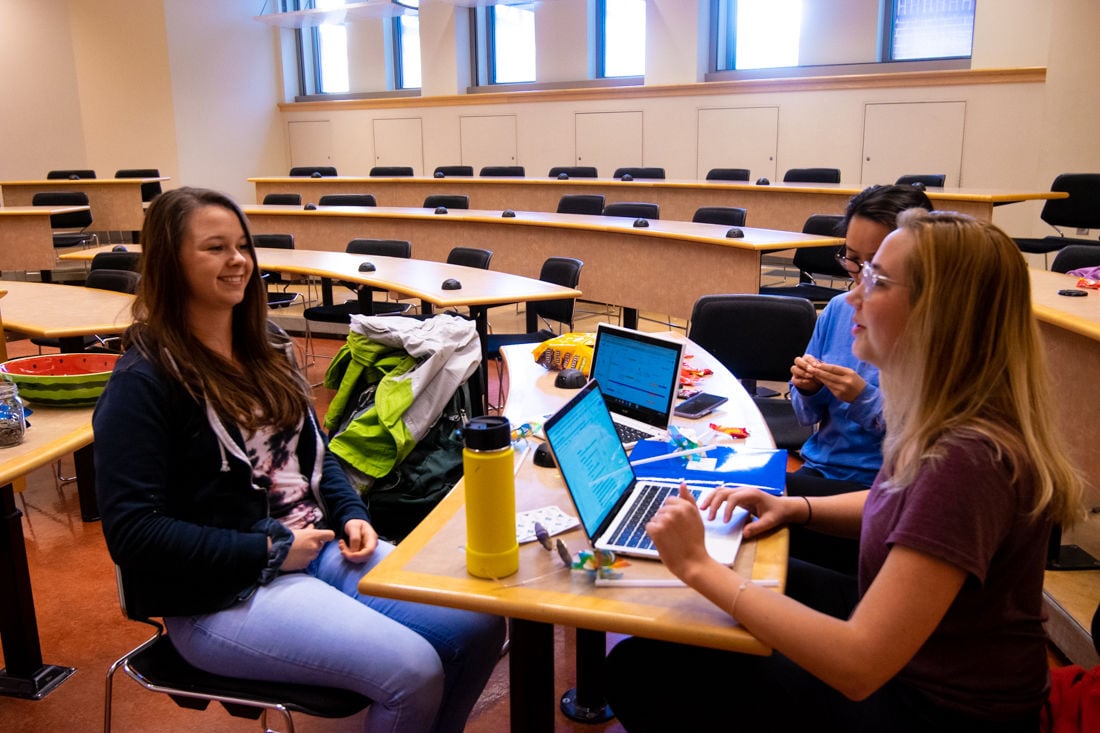 Abbigail Hepperle and Madison Correia started a 90by30 club at UO. The club is a branch of the 90by30 organization that strives to reduce child abuse in Lane County. (Kimberly Harris/Emerald) 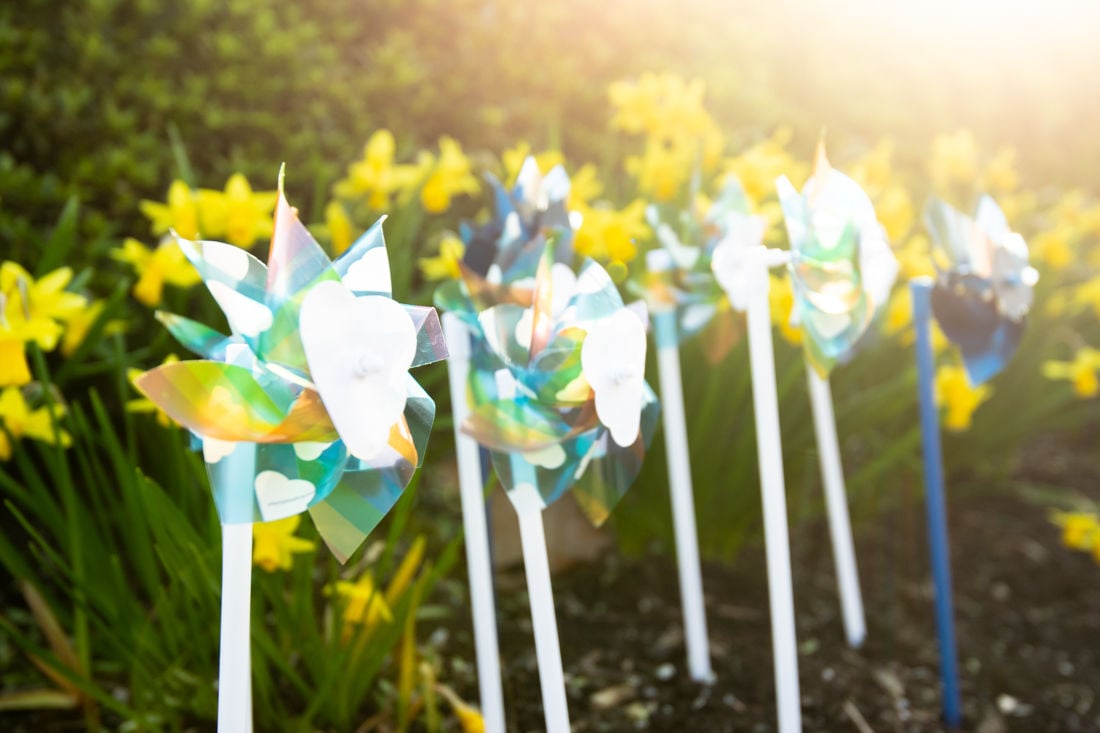 UO's 90by30 club is a branch of the 90by30 organization in Lane County that strives to reduce child abuse by 90% by the year 2030. Pinwheels are symbolic to the organization.(Kimberly Harris/Emerald)

As someone with nine siblings and family all over the state, University of Oregon junior Abigail Hepperle was shocked when she first heard about the prevalence of child abuse in Oregon.

“It really kind of hit home for me and a lot of it ticked me off,” Hepperle said. “I’m like, ‘Why don’t I know about this already?’ It should be as well known as a hospital or something.”

According to several studies conducted at the University of Oregon’s Center for the Prevention of Abuse and Neglect, one in three kids in Lane County have experienced abuse or neglect at some point in their lives — and University of Oregon professor Jeff Todahl said that the rates are likely much higher.

90by30, a grassroots organization in Lane County that Todahl helped to create, is dedicated to reducing the rates of child abuse and neglect by 90% by the year 2030. 90by30 says that with enough public awareness and action, this goal for Lane County is achievable.

“We have everything we need to get to a significant reduction,” Todahl said. “It’s really about mobilizing our community to feel more encouraged about the possibility of preventing child abuse and neglect.”

Todahl taught a class on the prevention of interpersonal violence in spring 2019, and ended up inspiring two of his students, Hepperle and Madison Correia, to start a student group dedicated to helping Todahl and the rest of 90by30 achieve their mission. The group is called Students in Support of Preventing Child Abuse and Neglect, otherwise known as SACA.

April is Child Abuse Prevention Month, and SACA planned to help out with events and make posters, tree ribbons and pinwheels to raise community awareness about child abuse. With events being canceled due to the COVID-19 outbreak and stay-at-home order, there have been significant changes in what 90by30 originally had planned for the month.

COVID-19 has also had an affect on the awareness of child abuse. Many states around the country have seen an alarming drop in reported child abuse cases since stay-at-home orders have been enacted. Cases are often called in by concerned teachers who notice marks and bruises on their students, but because children are no longer going to school every day, these mandatory reporters can no longer check in on them to make sure things are okay at home.

However, folks involved with spreading awareness of Child Abuse Prevention Month have decided to use April as a platform to show gratitude for people in the community, especially those who have stepped in to help families right now. The 90by30 Facebook page is making daily posts throughout April featuring Lane County public health care providers and staff.

In addition to these posts, there are posters in every Dari Mart to spread awareness, and SACA has worked to raise awareness through stories in publications around the country and on a KRVM radio show which will feature 90by30’s work.

For now, that is all 90by30 and SACA can do while staying at home and maintaining proper social distancing.

One of SACA’s main goals is to get the word out about 90by30’s mission, and to give students an opportunity to get involved. Hepperle calls this “collective action” or “getting everyone we possibly can to partner with us.”

“I think it was really shocking hearing the number of cases in a community we’re living in,” Correia said. “Growing up and having a functional family, I was never exposed to that. I can’t even imagine what I would have gone through if something were to happen to me or my siblings.”

Todahl says that the key to preventing child abuse and neglect is upstream primary prevention — or changing the conditions around child abuse which allow it to occur in the first place.

“When you reduce the silence that keeps surrounding this issue, then you start to get to some significant change,” Todahl said. “Changing those norms is something we can do, and we’re on our way.”

As part of this upstream primary prevention, 90by30 has partnered with a program called Roots of Empathy, in which babies are the teachers in Lane County classrooms. Every three weeks during the school year, a parent and a baby visit first and second grade classrooms so that children can observe a baby’s development and label the baby’s feelings. These interactions help the children to identify and reflect on their own feelings as well as the feelings of others.

In the annual Roots of Empathy program report for 2019, teachers commented on the “decrease in aggression” they saw among their students upon completion of the program. Roots of Empathy instructors have reported an increase in social and emotional understanding during the program as well. This year, there were 30 babies in classrooms around Lane County. The goal is to increase the number of babies in classrooms by 10 or 15 each year until every first and second grade classroom in Lane County is able to participate in the program.

Once it is fully up and running, SACA will help recruit parents with babies to expand the Roots of Empathy program. This may include talking with pediatricians, pushing social media and other ways of reaching parents.

Another upstream primary prevention strategy is The Welcome Baby Box, which is a safe and convenient place for infants to sleep. The Welcome Baby Box is filled with parenting essentials and resources that provide a connection to the community. Once cleared out, the baby can sleep in it if the parents do not own a crib or other safe place for an infant. SACA plans to host events where members can make items such as thank-you cards and pinwheels, the symbol for recognition and prevention of child abuse, to put in the Welcome Baby Box.

Community events such as the Parent Cafe serve to connect adults with one another in a setting where food and childcare is provided. The Parent Cafe event generates discussion around certain themes or topics in order to ensure healthy and productive exchanges between parents. At an event like this one, SACA would attend to provide childcare.

Hepperle and Correia say that real change will happen once people start breaking social norms by getting to know their neighbors, making reports when they see or hear something suspicious and talking openly with friends about child abuse and neglect.

“I think just having that talk is so important,” Correia said. “I had a conversation with one of my best friends and she shared something with me that was very personal. I don’t think I would have ever learned that if I didn’t create a safe space so she could actually talk about it.”

SACA is brand-new, and Hepperle and Correia plan to get the ball rolling once UO students are back on campus. They hope to recruit more interactive and engaging members to help out with campus events and community outreach. In the meantime, K(no)wMore is a website for community members to gain a better sense of what they can do. Because there is something that everyone can do.

“I have tuned in throughout my life partly because I had some of my own experiences early on, so I know what the pain of child abuse can be like,” Todahl said. “I stay involved because I’m encouraged.”