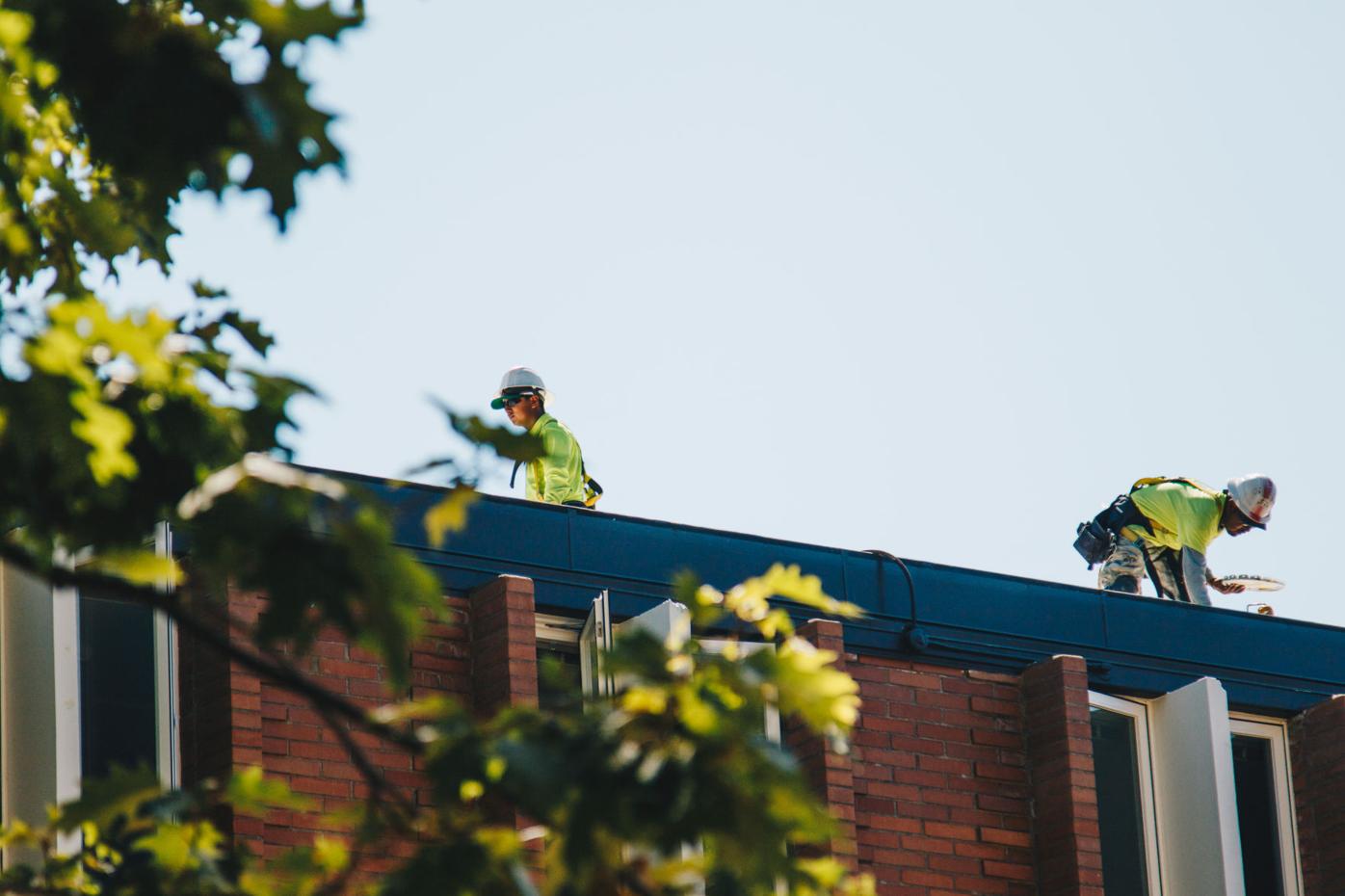 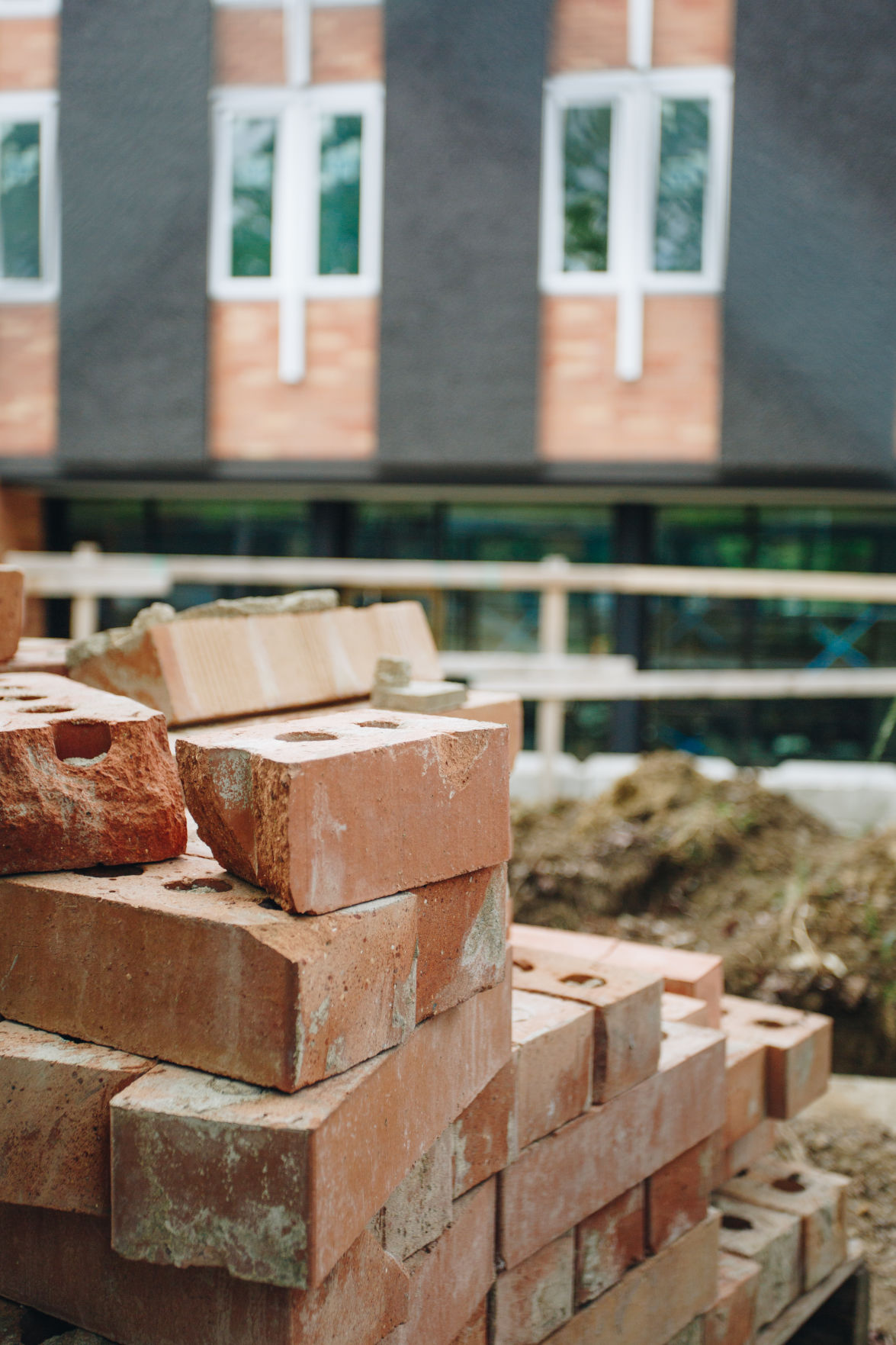 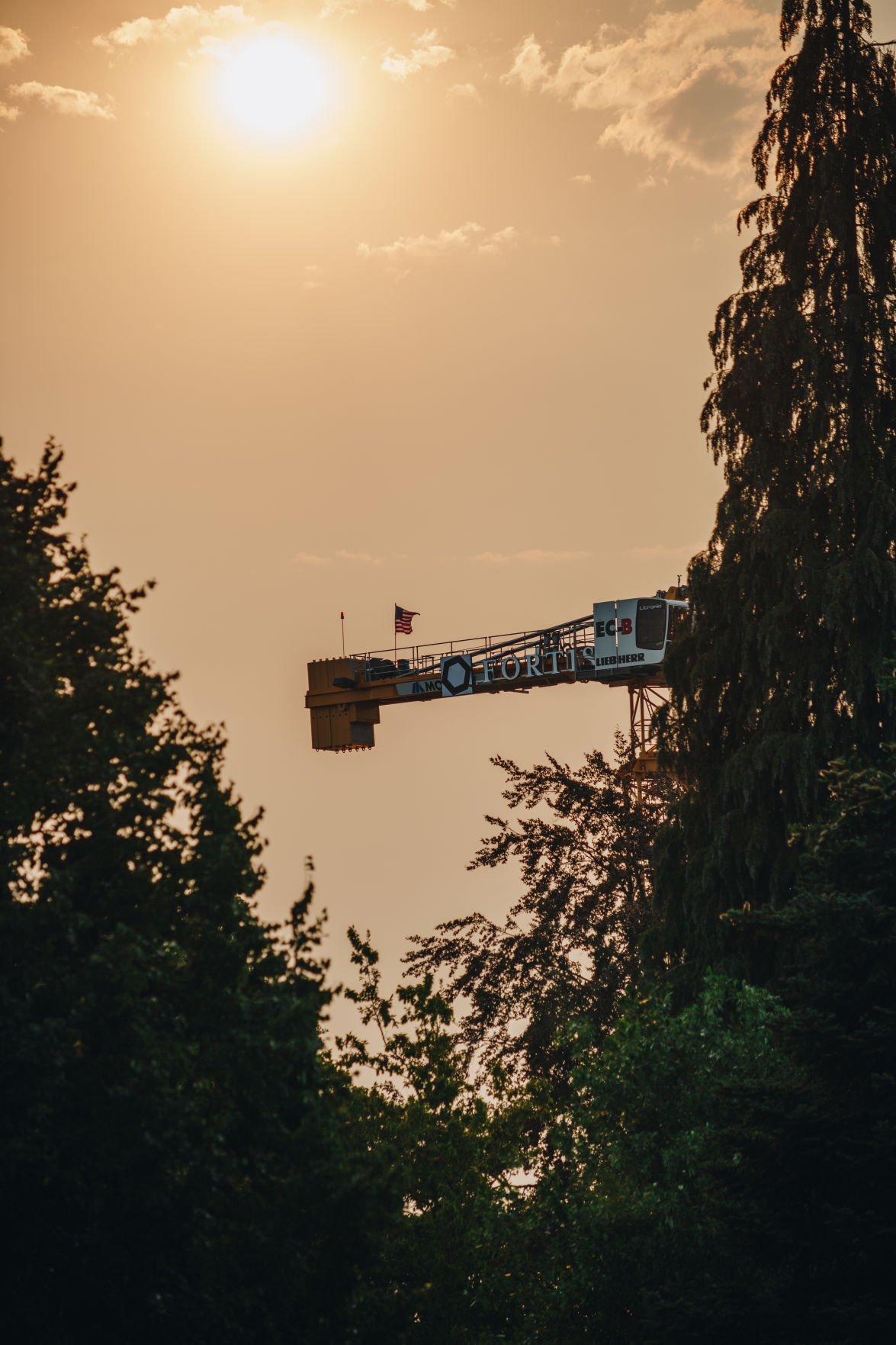 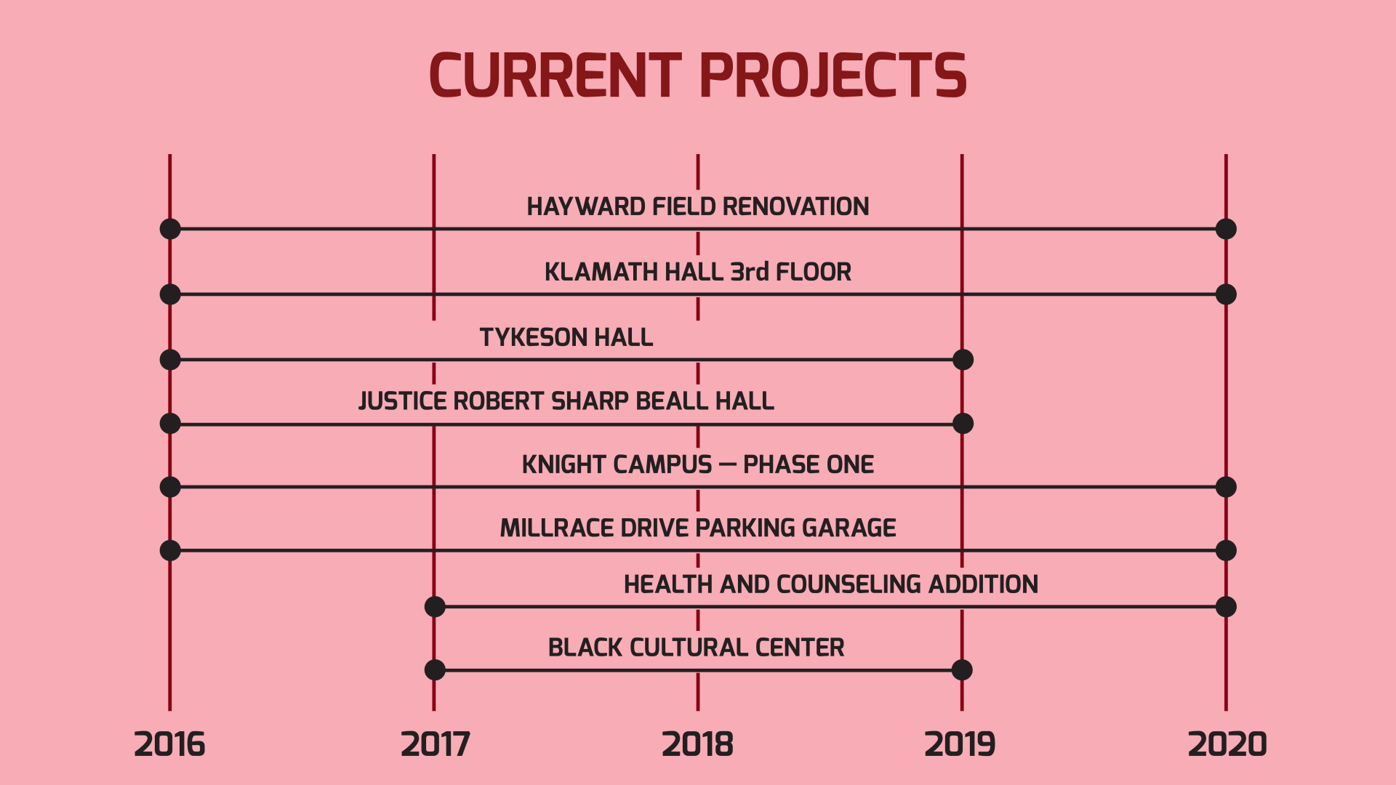 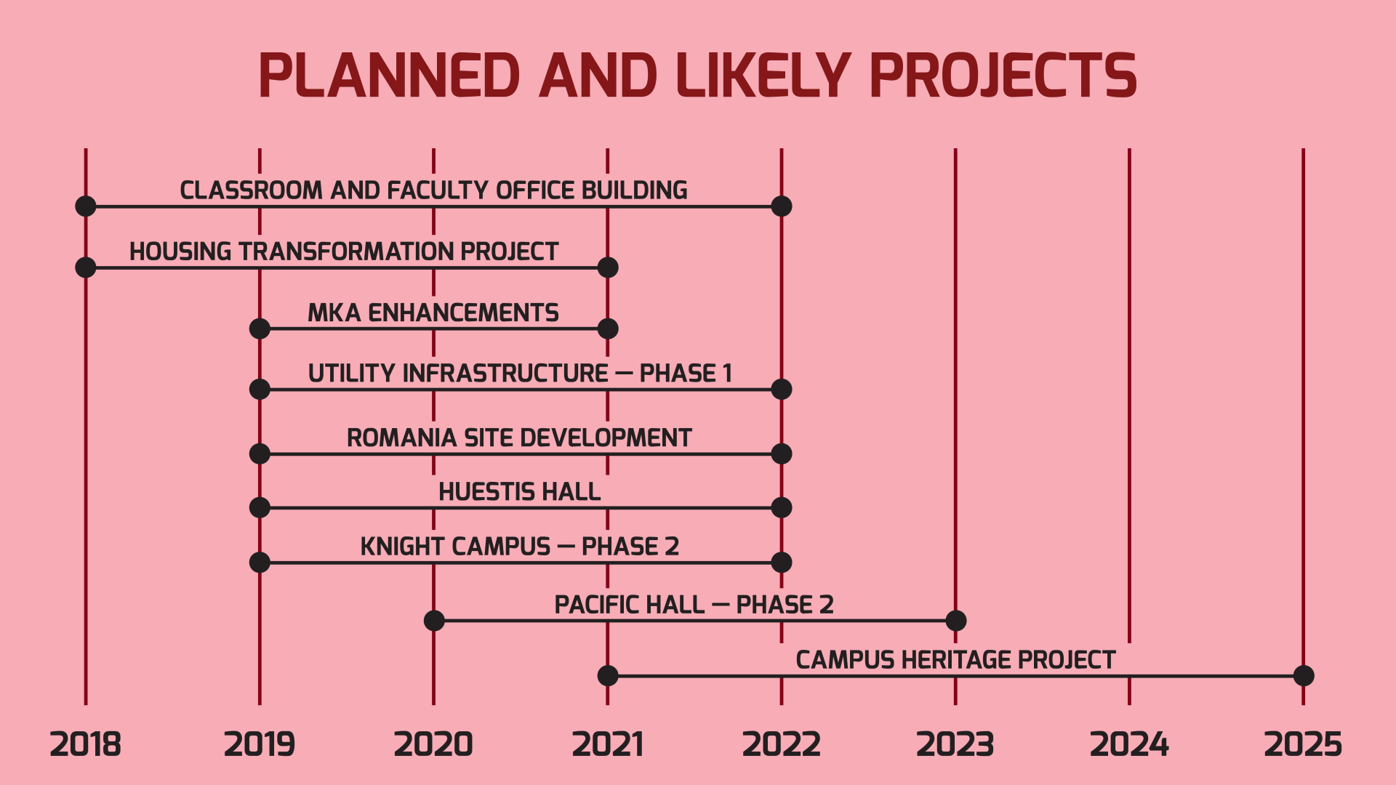 From Tykeson Hall on East 13th Avenue to Hayward Field across from the School of Law — construction is inescapable on campus. The loud noises and diverted paths have become part of the university.

According to the plans from the university, it won’t be stopping any time soon.

For the next 10 years, the university has planned constant construction on campus, totaling over $750 million in current and planned projects.

The university has ambitious plans to expand and update campus, including a $200 million  housing transformation project that plans to replace Hamilton and Walton Halls and build a new $56 million classroom and faculty office building to accommodate incoming students.

UO campus planning officials presented the 10 Year Capital Plan to the University of Oregon board of trustees last December.

“This is an organic, growing campus,” said Michael Harwood associate vice president and university architect. “There will never be an end to the construction, but we think very carefully about how we are going to impact not just the students but our faculty and our staff.”

Many students are disgruntled and upset by the construction because it disrupts their classes and in some cases, their housing. Terri Chrestenson, a freshman at UO, said the view from her dorm room window is blocked by construction.

“I came here for the trees and the brick buildings, not the cranes,” Chrestenson said. “It makes the vibe a little different on campus.”

The sidewalk by LLC South has been completely blocked off due to construction, forcing students to walk around the dorm to get back on the path.

Devri Molony, a freshman at UO who lives off campus, said getting around campus is hard with all the construction.

“You have to find different routes to go places,” Molony said. “I feel like there’s a ton of projects going on right now and that makes it kind of difficult to move around.”

Harwood said previous construction projects, such as the EMU or Allen Hall renovations, were inconvenient for students, yet they improved the university for incoming students.

“Your classmates before you were probably irritated about what they had to go through during the construction,” Harwood said. “We understand that, and it’s an unfortunate reality.”

The university plans to grow campus by 3,000 students over the next eight years to increase tuition revenue. UO needs to expand to accommodate these students, Harwood said.

There are also several buildings on campus that were constructed over 50 years ago that need to be updated, such as Huestis Hall, Pacific Hall and some of campus’ original buildings such as Deady and Villard halls.

Because of the high volume of possible construction plans, Harwood said the university needed to create a document to outline the priorities of the university in a clear and digestible way.

“Our campus plan really pursues the three goals that we’ve had our president articulate. We want student success, we want to grow our research program and we want to enhance our faculty. So all of these projects are really in pursuit of those three goals,” Harwood said.

Video: Construction on the University of Oregon's Campus

This plan is divided into three categories and outlines 36 projects: current projects, planned and likely projects and potential future projects.

The university is already constructing $365 million worth of capital projects on campus, including Tykeson Hall, Bean Hall renovations, Knight Campus, the University Health Center renovation and the Black Cultural Center. Hayward Field is not included in these numbers as it is under private development.

Jamie Moffitt, the chief financial officer at UO, said the majority of these projects are not being funded through tuition dollars alone.

“These projects affect tuition at a very small amount. Most of the funding comes from other sources,” Moffitt said.

Moffitt spoke at the Tuition and Fees Advisory Board to address some of the concerns students have about tuition increases as a whole, including how capital projects affect tuition.

Donations and gifts often fund the majority of capital projects. Tykeson Hall and the Knight Campus both received substantial donations that made these projects possible, including a $500 million donation from Phil and Penny Knight for the Knight Campus.

Moffitt said there are other sources of funding that go toward capital projects, including state and revenue bonds. UO must provide a portion of the funds in order to apply for revenue bonds. The university pays off these bonds over time through an internal banking structure.

For example, when the university takes out bonds to pay for a housing project, they pay off the bond through housing fees from the students that later live in that dorm.

State-paid bonds are paid for by the Oregon government.

“Debt is used for capital projects. You don’t want to borrow for your operations [such as faculty employment] — that’s not a fiscally responsible thing to do,” Moffitt said.

When it comes to choosing which projects make it on the 10 Year Capital Plan, the university evaluates building structure and departmental needs, rather than consulting students specifically.

“There is no student input involved, I can say that, and it’s largely driven by those of us here that are the professional staff — the architects and engineers that the university employs,” Harwood said. “We are constantly walking through our buildings and getting better data about what is a deficiency or deferred maintenance.”

The Campus Planning and Facility Management team conducts facility condition assessments to check the structure of the buildings, the plumbing system, the electrical system, as well as roof and window conditions.

This assessment identifies the deferred maintenance on certain buildings within the university.

“Deferred maintenance is maintenance that you haven’t performed for a variety of reasons that means that now, by deferring it, it’s going to get more expensive,” Harwood said.

For example, the Klamath Hall third floor renovation project stemmed from an assessment that revealed the dramatic temperature changes the building experienced throughout the day because of the structure of the building, Harwood said.

Deferred maintenance is one of the most common reasons a building is added to their recommended projects list.

The Campus Planning and Facility Management team also conducts regular space-needs assessments, Harwood said. They talk with the deans and vice presidents of the university about the future plans for their departments and what sorts of space they will need to be successful.

For example, the university wanted to improve the student experience and incorporate academic advising and career counseling into the campus. After this space-needs analysis, the university designed Tykeson Hall to address this need.

All projects also have to fulfill certain principles that the larger Campus Plan — which is separate from the 10 Year Capital Plan — outlines.

“[The Campus Plan is] the main process tool that we use to ensure that the campus develops in an orderly and organized way that preserves the things we all love about the campus, the things that really brought us all here and make the university unique,” Harwood said.

Within the Campus Plan, there are 12 principles, or value statements, that each plan must align with. These include maintaining the architectural style of the university, practicing sustainable development and replacing any of the building’s uses that are lost during the construction process.

For example, Tykeson Hall was placed on a 45-space parking lot. Because of the principle that requires that any displaced uses be replaced, the cost of the project was driven up to replace the parking spaces in a different location.

The Campus Planning Committee reviews each project to ensure that it aligns with the principles. From there, the projects that cost more than $5 million are presented to the university administration to be added to the 10 year campus plan. Then, the administration can present projects to the Higher Education Coordinating Commission for potential state funding to cover some of the costs of construction.

The state allocates a portion of the budget for capital projects to be divided among all the universities in Oregon.

The HECC presents a list of capital projects to the governor to be included in the state budget. There is a chance that funding could be denied for a project, depending on the governor's budget each year.

After the project has been gifted state funding, the university looks to other sources of funding to fuel the project, such as revenue bonds or donations.

For example, the Huestis Hall project was approved by the HECC and is being sent to the governor for official approval. Depending on how much state funding the project receives, the university will still have to cover a portion of the budget with other sources of funding, such as revenue bonds which the university has to pay off, Moffitt said.

“So much of what we’re doing is for the students of tomorrow,” Harwood said. “There is going to be some frustration that folks don’t get to enjoy those projects, but there are some things that we’re all enjoying that our predecessors did for us.”

Hannah is the senior news editor for the Daily Emerald. She used to cover the university senate and construction on campus. Send news tips to hkanik@dailyemerald.com