This article is part of a series about campaign finance in student government elections.

If students wanted to find out who donated to ASUO slates during this year’s elections and in years past, they’d have a hard time doing so.

While the names of those who donate to state and federal campaigns are disclosed to the public, students at the University of Oregon are left in the dark about who is donating to their student government elections because of heavy redactions applied to records.

ASUO slates are also sometimes left with surpluses after their campaigns, and due to a lack of ASUO regulations, that money could be used for personal gain.

In April 2019, the Emerald acquired ASUO campaign contribution and expenditure forms from 2015 to 2018 that were almost entirely redacted. The redactions, which in most cases only provided the amount of money donated, prevented knowing who donated to slates, as outside individuals, businesses and organizations can all donate. In 2016, for instance, the Democratic Party Precinct Committee donated $82 to the slate I’m With UO.

After receiving these records, the Emerald filed an appeal with Lane County District Attorney Patricia Perlow asking for the disclosure of records free of redactions. In its appeal, the Emerald argued that students have a right to know who is contributing to their student government elections, and that campaign contribution and expenditure documents did not constitute “educational records,” as defined by the Family Educational Rights and Privacy Act.

In email correspondence with the Emerald, the UO Office of Public Records said that “transparency in elections is important” in regards to the redaction of the donors’ names, but insisted that revealing certain names would be a violation of privacy.

“While the candidates in these campaigns do sign consent forms allowing the University to make their names public,” the office wrote, “the candidates are not all 100% of those making campaign contributions and completing the contribution and expenditure forms, nor are they all of the donors to their campaign.”

FERPA provides students over the age of 18 with privacy protection for educational records, allowing said students the ability to control the release or distribution of their academic information.

FERPA has been used by educational institutions before to contest press access to different types of records. A 2010 investigation by The Columbus Dispatch revealed that multiple universities across the country referenced FERPA in not sharing information about NCAA athlete violations.

In 2010, the University of Wisconsin-Milwaukee was required to pay legal fees for the student newspaper, The UWM Post, after refusing to release documents such as student government meeting minutes, having cited FERPA as the reason for the denial. 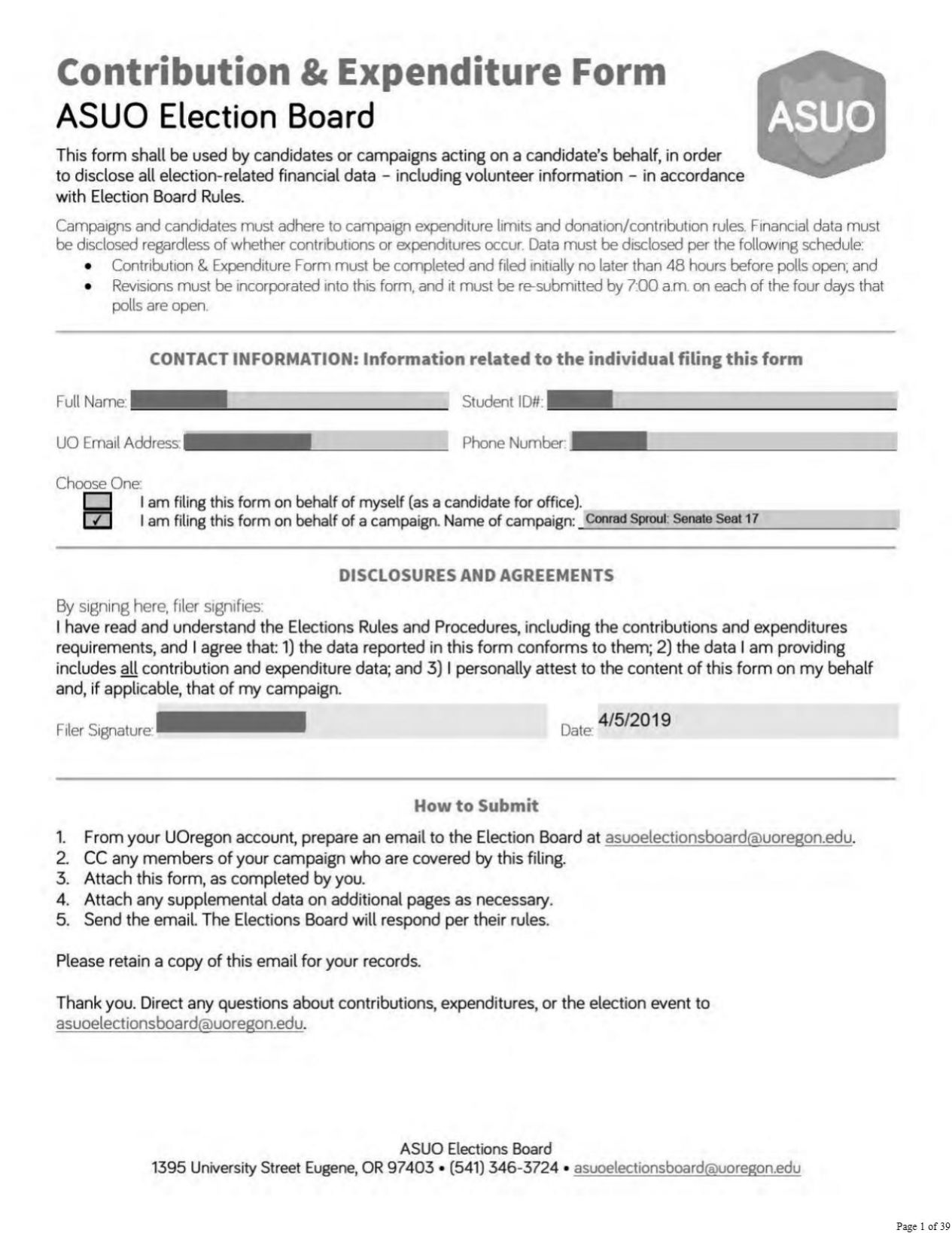 While students did donate to campaigns, the initial redactions may have concealed the names of parents who donated to ASUO campaigns. Parents have contributed to ASUO campaigns, as in 2019, when the Oregon Alliance slate received $2,500 dollars from the mother and father of then-vice presidential candidate Michael Kraan. After the petition, UO Public Records said that the subsequent documents provided to the Emerald did not have the names of parents redacted.

In the official response to the Emerald’s appeal, UO Public Records defended the notion that the campaign forms are considered educational records because of the broad nature of the definition, which encompasses any record directly related to a student and maintained by an educational institution.

The office cited Oregon Public Records Law, which provides an exemption of disclosure of any records not permitted to be disclosed under federal law. UO Public Records stated that as the university receives federal funding as an educational institution, it is then required to comply with FERPA.

The response also acknowledged a 2014 attempt by The Register-Guard to obtain records related to sexual assault allegations made against three UO basketball players. The Lane County District Attorney’s Office agreed with the UO in that case that the information requested — records, emails or texts —  related to students, and was therefore protected by FERPA.

Ultimately, the ruling provided by Perlow and Assistant District Attorney Robert Lane, who had worked with the Emerald and the Office of Public Records on the matter, sided with the UO and did not order that any more redactions of campaign donors be removed.

Perlow and Lane provided little detail on the ruling decision, writing that “it appears that the University has provided responsive records, having redacted the names of students and phone numbers.”

They also noted that keeping in line with “previous opinions” of the office, “phone numbers are conditionally exempt from disclosure.” In the original petition, the Emerald did not request that the phone numbers of campaign donors be unredacted.

“While the appellant may be correct in arguing that there is a public interest in knowing who the donors are,” Perlow and Lane wrote in the ruling, “FERPA does not allow the University to make such a determination, and override FERPA’s blanket privacy mandate.”