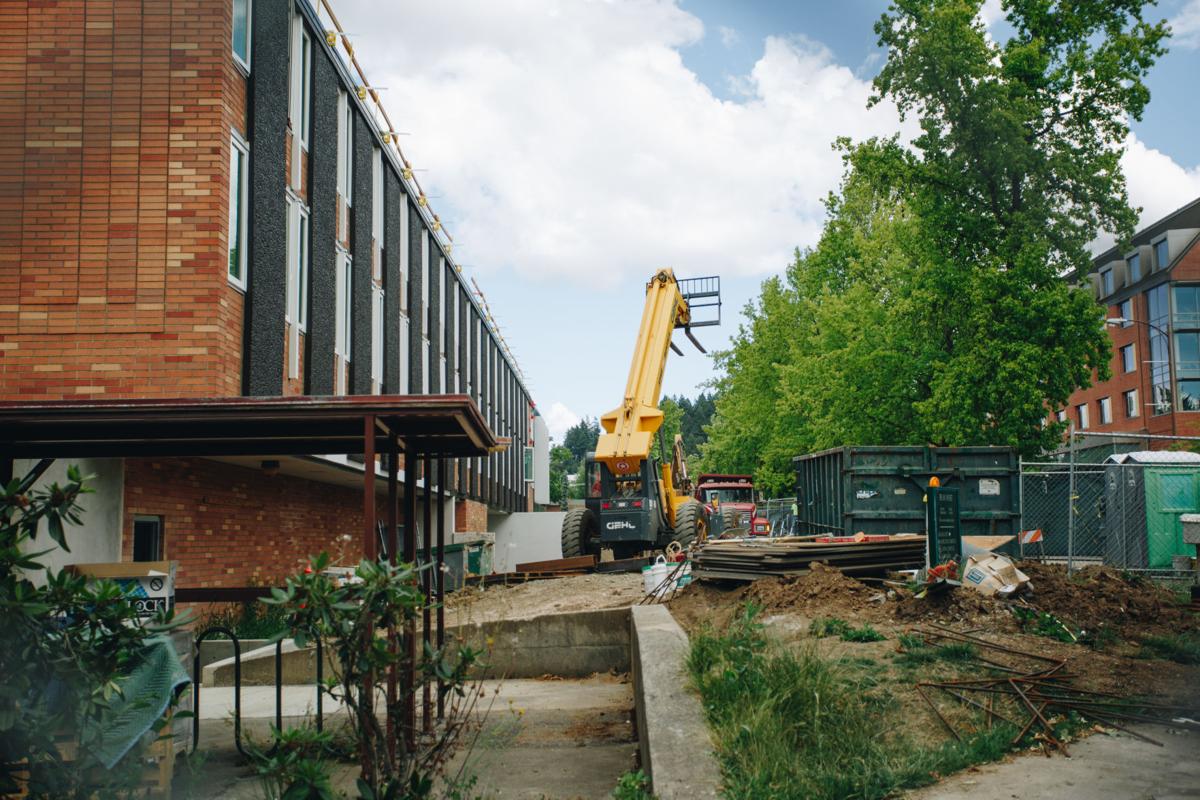 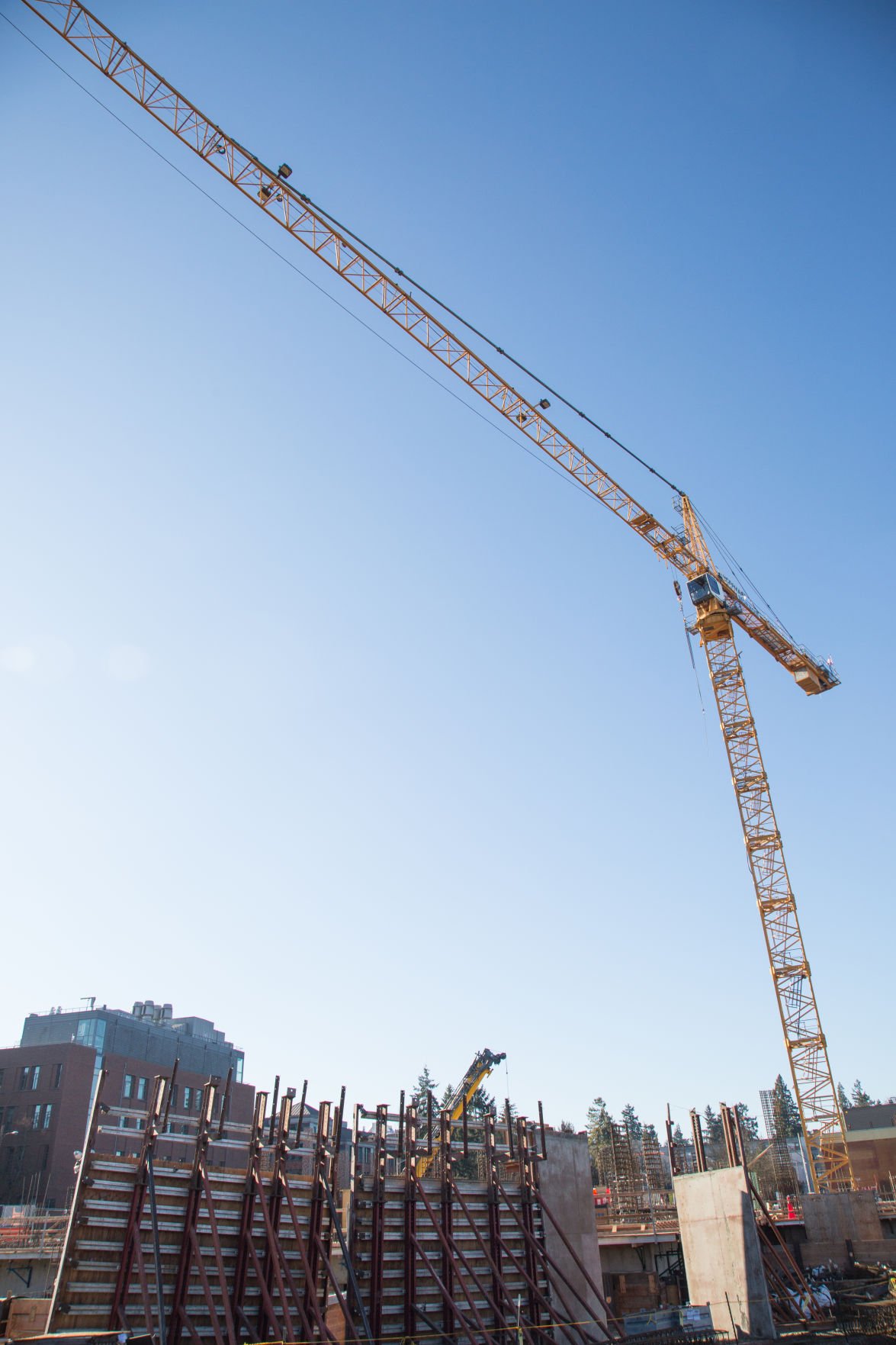 Ongoing construction of the Phil and Penny Knight Campus for Accelerating Scientific Impact as of Jan. 13, 2019. (Sarah Northrop/Emerald)

This year’s freshman class, the Class of 2023, broke records for its diversity and its GPA. The university renovated Justice Bean Hall and is preparing to tear down Hamilton and Walton halls. Campus is expanding to the north with the addition of the Phil and Penny Knight Campus for Accelerating Scientific Impact. Construction will be a constant presence on campus for the next decade, according to the university’s 10-year capital construction plan, which includes projects like the renovation of Hayward Field.

In other words, the University of Oregon is hoping to expand. Whether it can meet that goal depends on if it can recruit more out-of-state and in-state students, said Dr. Roger Thompson, the UO vice president for student services and enrollment.

“In public higher education, tragically, I don't think states are going to get back to the funding levels that they once had 20 or 30 years ago,” Thompson said when asked why the university wanted to grow. “If that's not going to happen, then we're not going to sacrifice the quality and excellence of the University of Oregon. And so, that leaves us with the idea that maybe we can grow a little bit, and I think we have capacity.”

Thompson said he’d like the university to grow to around 25,000 students, near the peak that UO reached during the 2012-13 school year.

The university’s plans for expansion can be seen around campus. What Thompson has dubbed the “Housing Transformation Project” — the plan to tear down and rebuild Hamilton and Walton halls — began in late November, as fencing surrounded the green space that students have nicknamed “Humpy Lumpy Lawn.”

This housing plan is meant to attract prospective students with dormitories that have modern technology, such as Wi-Fi and computers, as well as inclusive dining options, like gluten-free and vegetarian cuisine.

One recently finished renovation, Bean Hall, was the first major remodel of an on-campus dorm that dated back to the 1960s. After finishing construction this fall, the dorm now offers space for new Academic Residential Communities such as the Latinx Scholars ARC and the Health Sciences ARC.

But the plan to build new residence halls does not entirely square with the findings of a residence hall feasibility study from September 2011. The report, meant to inform UO’s future housing projects, states that the university should “not demolish its existing debt-free housing, but rather maintain it and renovate it.” That conclusion is based off of the costs of adding additional housing and the subsequent changes to room rates.

“We are experiencing a significant student demand for a greater percentage/mix of larger rooms and rooms with in-room private bathrooms,” Housing Director Michael Griffel said in a statement when asked about the feasibility study. “There is also demand for lower cost, smaller double style rooms and triple occupancy rooms. The combination of legacy residence halls (Justice Bean, Earl, Carson, Riley) and new residence halls with some triple room occupancy spaces, currently meets and is projected to meet future student demand.”

At their December meeting, the university’s board of trustees authorized the issuance of $120 million in bonds to fund university capital projects, including a new dorm on the Humpy Lumpy Lawn, according to board documents. In a question and answer session with Emerald reporters and editors last week, UO President Michael Schill said that the university looks at debt carefully and described the amount of debt the UO has taken out as “prudent.”

Part of the university’s plan to attract more students also includes an effort to bolster its science and technology programs. The construction of Knight Campus is one of those initiatives, but it also involves new degree programs, such as neuroscience, data science and bioengineering, which were discussed during that board of trustees meeting.

Schill told Emerald reporters and editors that the new programs were meant to help attract international students to come to the UO.

Oregon residents comprise about half of UO’s student body. Around 40% comes from out of state, with the remaining 10% coming from outside the United States.

About a quarter of the total student body comes from California, and this fall, out of this year’s incoming class, about one in three students hail from California.

Nonresidents have comprised a growing piece of UO’s student body since 2006; the percentage of out-of-state students at UO has increased almost every term since then, according to historical UO enrollment reports. Each incoming class has also been more diverse and has had higher GPAs than those before it.

UO students come from all 50 states and from several different countries around the world, Thompson said. He added that he would like to add more university recruiters in places such as Texas, a place where more prospective UO students are coming from and where it’s hard for the enrollment department’s single Texas recruiter, located in Dallas, to cover effectively. (“All you gotta do is look at a map of Texas, and the state of Texas is gigantic!” Thompson said.)

But over the past few years, the university’s total enrollment numbers have been steadily declining. Total enrollment, including undergraduate and graduate students, peaked for the university during the 2012-13 school year, when the campus population reached over 24,500 students, according to the UO Institutional Research website. That figure has fallen steadily since then, with a decline of about 2,000 students to where enrollment stands now, at 22,500 students. (That’s a decline of almost 10%.)

Thompson said this decline in students is from more students being able to graduate in a shorter period of time.

“It's actually a good thing,” Thompson said. “It’s what we're supposed to be doing. Now, we brought in this huge freshman class, and we're probably on the road to another one that's going to look like that. So that trend is going to turn.”

This enrollment drop also coincides with a decline in the university’s number of international students, which has fallen from a peak of about 3,200 students during the 2015-16 school year to about 1,700 during the 2019-20 school year, according to UO institutional research data. Thompson attributed this to the federal government making the visa process difficult, saying that: “We'd like to be doing better internationally than we are. And we're working on that.”

For one, rising tuition costs. Just in the last decade, tuition has increased eight times. According to the earliest inflation-adjusted tuition data available, from 1980, an Oregon resident would have paid $2,233 in tuition. Nonresidents, on the other hand, would have paid $9,687, or more than four times as much. (Thompson has acknowledged that these increases generate anxiety for prospective students.)

Related: “Class of 2023 is largest, most diverse class in history”

But the university may have a potential workaround. At the most recent meeting of the board of trustees, UO’s Chief Financial Officer Jamie Moffitt, along with Thompson and Vice President for Student Life Kevin Marbury, introduced a “guaranteed tuition” model that would institute a tuition ceiling for students the year they begin school.

The trustees have seen this concept before, when Thompson presented it in 2015, according to The Register-Guard. Thompson, who described himself as “cautiously optimistic” about guaranteed tuition in a recent interview with the Emerald, said that such a model could alleviate financial stress from prospective students and their families.

It could also prevent tuition increases from outpacing the value of scholarships, Thompson added, using the example of a $5,000 scholarship, since the amount of money that scholarships give does not change depending on how much tuition costs.

“That's one of the things I like about guaranteed tuition, is that the $5,000 over these four years, with tuition staying the same, has the same buying power in your freshman year as it does in your senior year,” Thompson said.

This model still needs approval from Schill and the board of trustees before it is implemented. Right now, the university tuition board is discussing the details of what such a program would look like.

At the moment, campus continues to grow, and Thompson has high hopes for the future, saying that higher education is the biggest investment that families will make — if they don’t own their own home.

“If they own their home, then it’s the second biggest one they’ll make,” Thompson said.