Five individuals applied for a seat on the University of Oregon board of trustees, according to documents from Oregon Gov. Kate Brown's office obtained by the Emerald through a public records request. The board will have an open seat in July after trustee Connie Ballmer announced her resignation in March.

The appointment runs through June 2023 and comes at a critical time for the university: Administrators are seeking solutions to an impending budget crisis just months after the board’s approval of a plan to completely overhaul how UO charges tuition and collects revenue.

Not to mention an uncertain future for the status of campus closures and in-person instruction.

The 15-member board of trustees is responsible for making high-level decisions for the university, from appointing the president and setting tuition to approving new degree programs and allowing major construction.

Brown will appoint the trustee to replace Ballmer on the board, and the Oregon Senate will approve her appointment. Though Ballmer’s seat will be open on June 30, staff from both the governor’s office and the university weren’t certain of when an appointment would be announced, given that the senate has changed its approval process in light of COVID-19.

As of April 13, the only public comments the governor’s office had received about any of the candidates were from the board’s current chair and vice chair, Chuck Lillis and Ginevra Ralph. In their letter, the pair endorsed three of the candidates for appointment but offered no opinion on the others.

The Emerald reviewed the five applications and highlighted their key experiences:

(The information about the applicants is according to their applications submitted to the Governor’s office unless otherwise specified.) 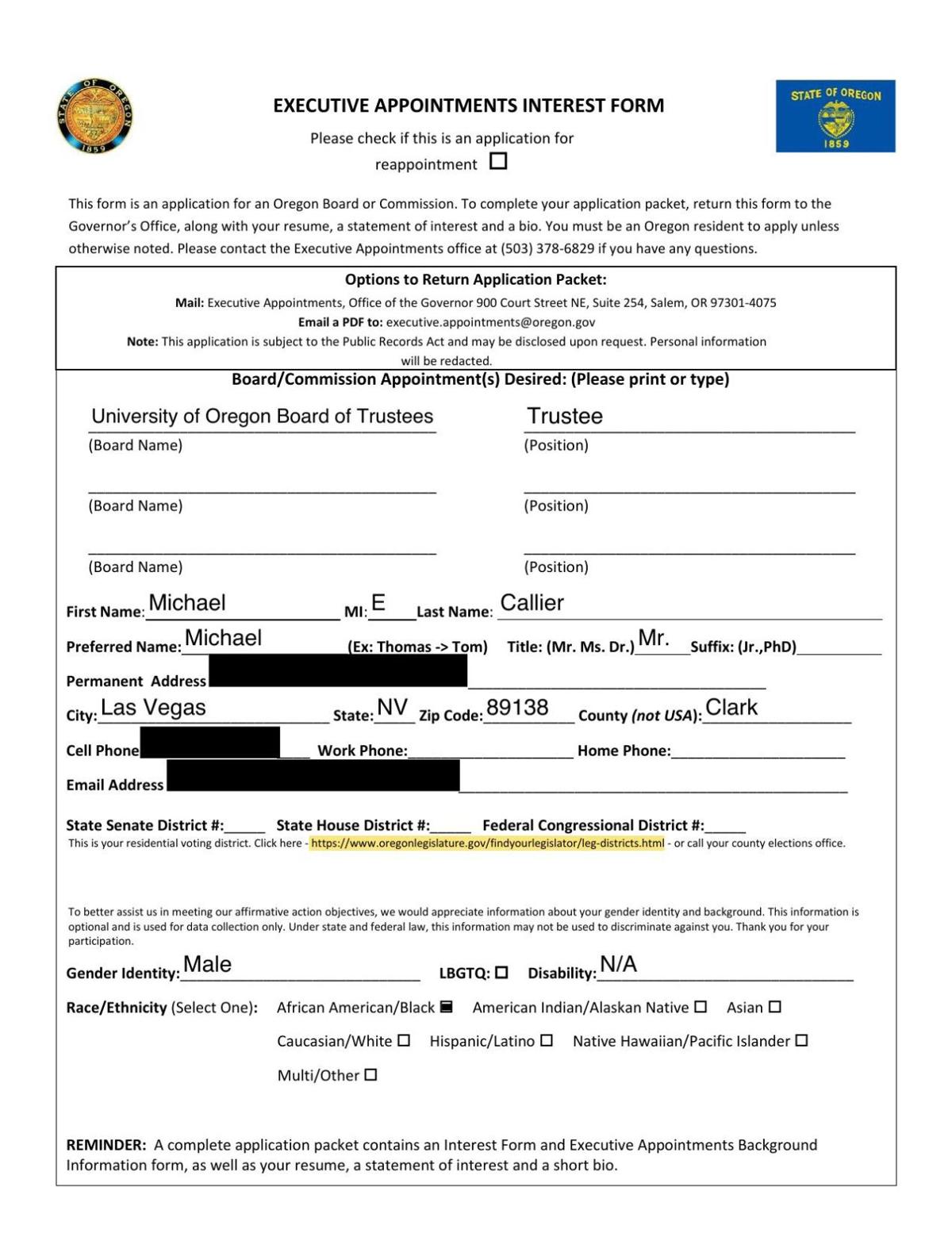 Michael Callier graduated from UO in 2001 with majors in political science and psychology, according to his resume. During that time, he was a starting linebacker and co-captain of the Oregon football team.

“Attending the UO helped me to overcome the inherent obstacles associated with growing up as an ‘at-risk youth’ from a broken home in Portland, Oregon, with household income below the poverty line and drugs and violence at our doorstep,” Callier wrote in his application.

Callier graduated from the UO law school in 2004 and, since then, has served in a variety of legal roles at companies including Nike, a consulting firm doing work in China and law firms in Seattle and Portland. He’s currently Senior Corporate Counsel at Darigold, according to his resume.

The letter from Lillis and Ralph recommended Callier, saying “he has tremendous experience in change management, innovation, and complex business transactions.” 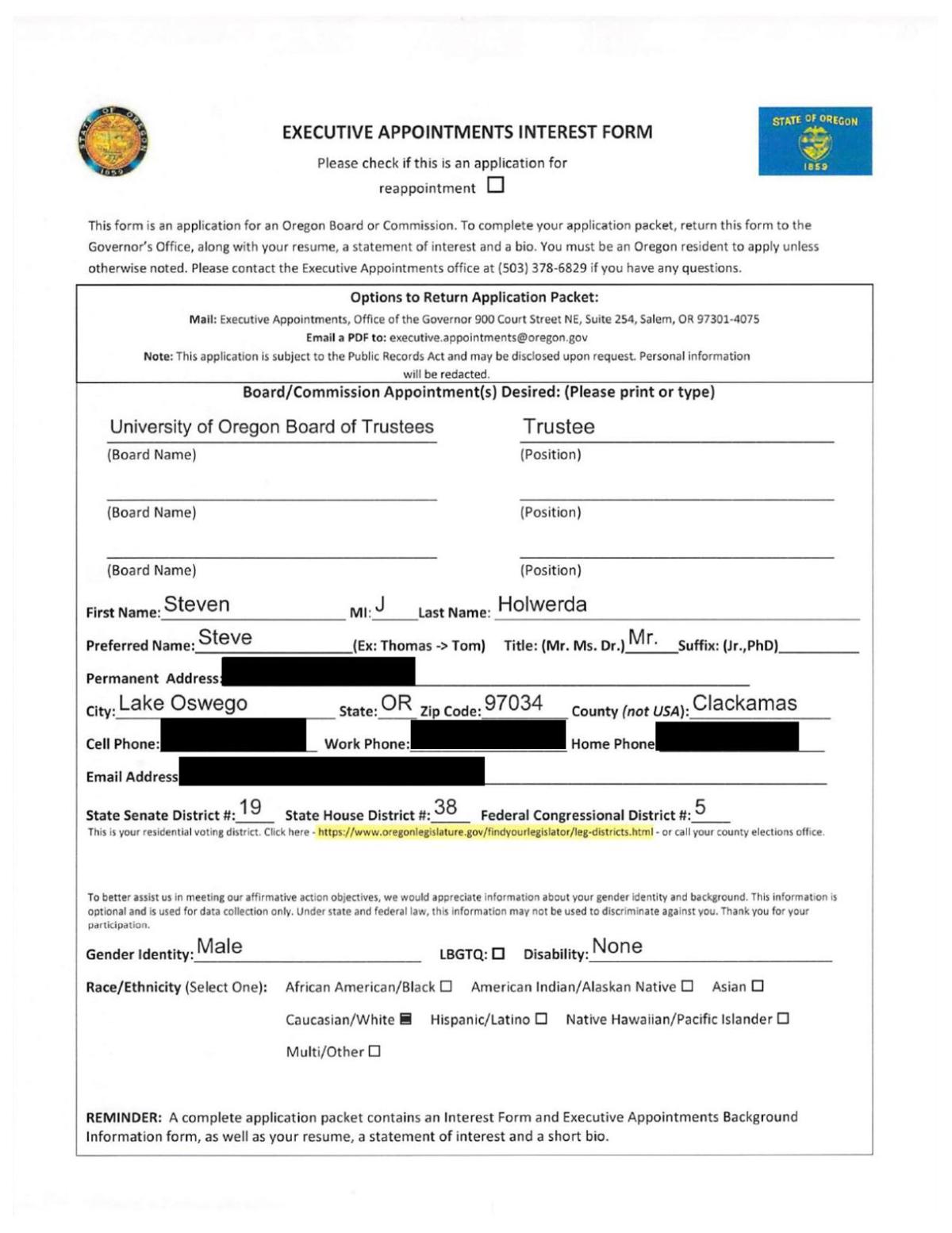 Steve Holwerda graduated from UO with a Masters of Business Administration in 1991 after moving from South Dakota to Oregon in 1985, according to his application. He’s worked at a Portland investment management company since 1989, where he’s now the managing director.

“My interest in the position is grounded in my belief in higher education as an economic engine for our state, the important part a college degree paves for graduates, and my personal experience with the University since 1985,” Holwerda wrote in his application.

Holwerda’s involvement with UO has included time as a volunteer fundraiser, a trustee for the UO Foundation (UO’s private, nonprofit fundraising arm) and the chair of the Foundation’s board in 2015 and 2016, according to his application.

The board of trustees’ letter recommended Holwerda, saying “he has been an active volunteer” and he “has immense experience with complex financial and organizational matters.” 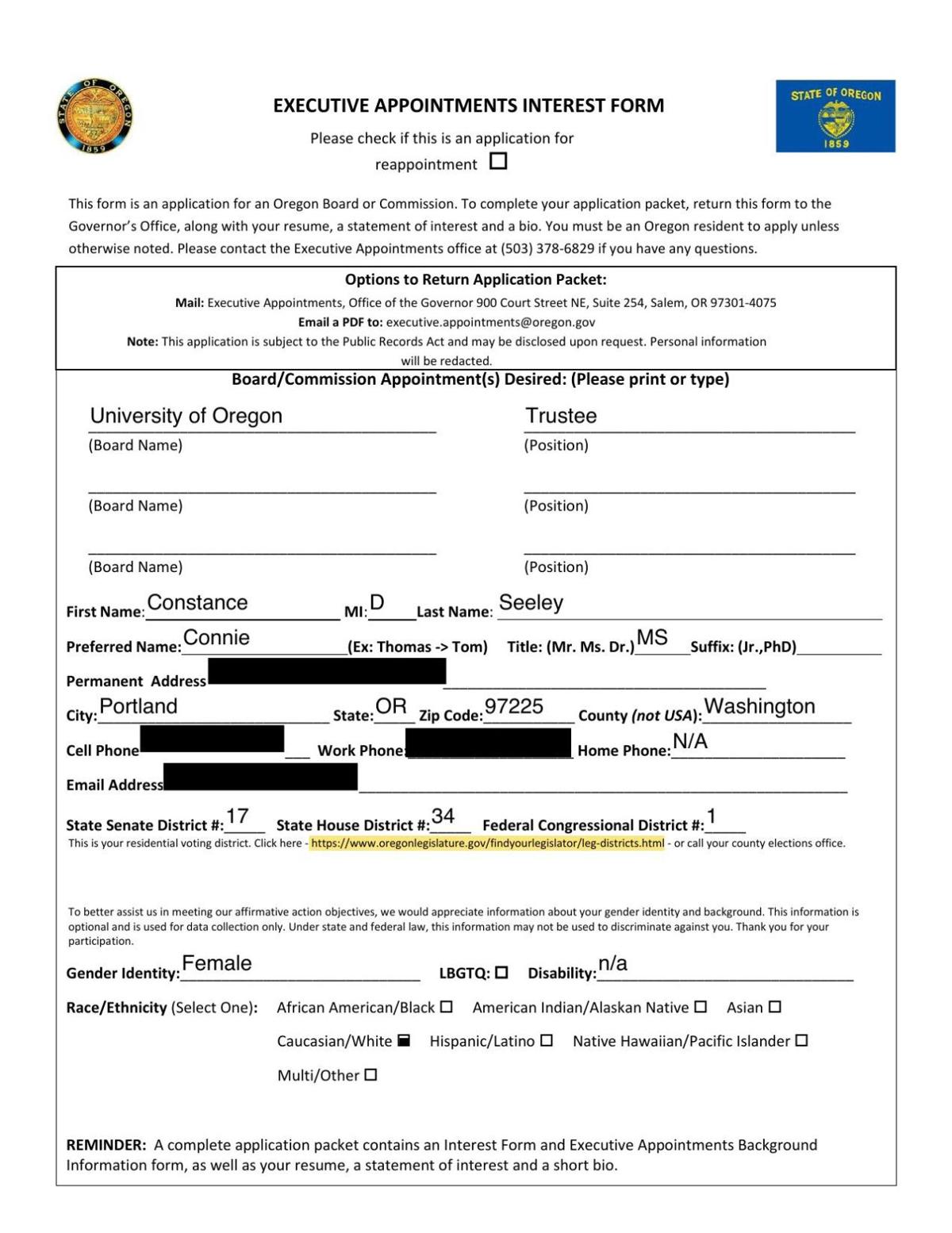 “Growing up in Oregon I was able to attend the University with the support of grants, loans as

well as full and part-time employment,” Seeley wrote in her application. “I was a first-generation college student; in fact, neither of my parents graduated high school. I believe my education at the University of Oregon changed my life.”

Seeley’s no stranger to Brown, who will appoint the next trustee — while working in the Oregon Legislature for 12 years, Seeley worked as Brown’s legislative director and, primarily, the chief of staff to Senate President Peter Courtney.

The board’s letter recommended Seeley, saying, “She has exceptional experience in higher education administration—including shared governance—given her role at OHSU, as well as with policy development and implementation.” 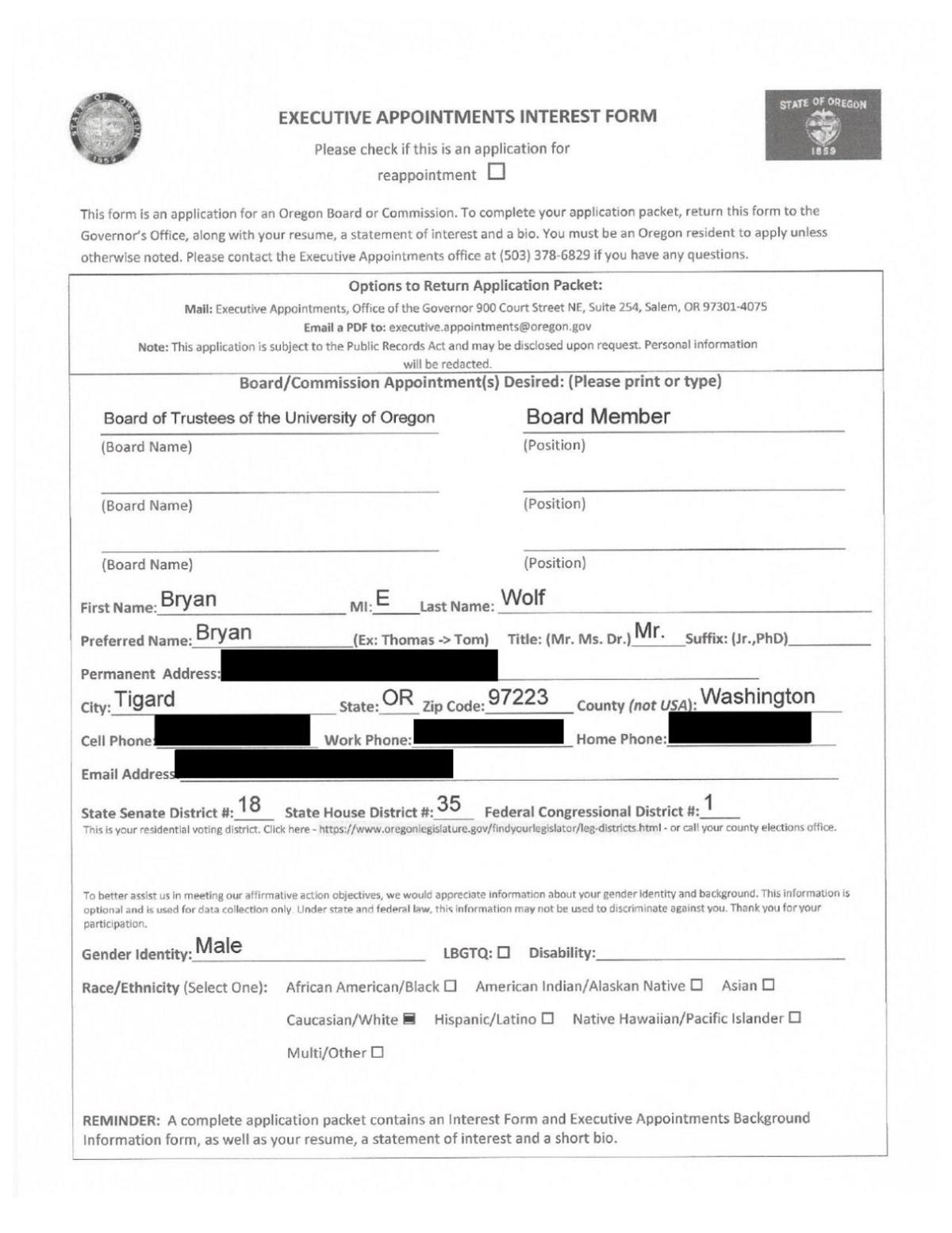 Bryan Wolf graduated from UO in 1985 with a degree in political science and spent much of his time since then at Intel in Beaverton. He held several finance and investment roles at the computer processor manufacturer between 1997 and 2019, including vice president and managing director for Intel Capital, the company’s investment arm.

“I want to utilize my strategic and governance expertise to help facilitate opportunities in higher education through the Board of Trustees for my alma mater, the University of Oregon,” Wolf wrote in his application.

Currently, Wolf serves on the boards of directors for two tech companies. He also serves as a business plan judge for the UO College of Business’ New Venture championship, and international entrepreneurial investment competition.

Wolf expressed interest in joining the UO board of trustees in December 2018 while he was inquiring with the governor’s office about being appointed to one of the state’s boards and commissions, according to emails released by the office last year. 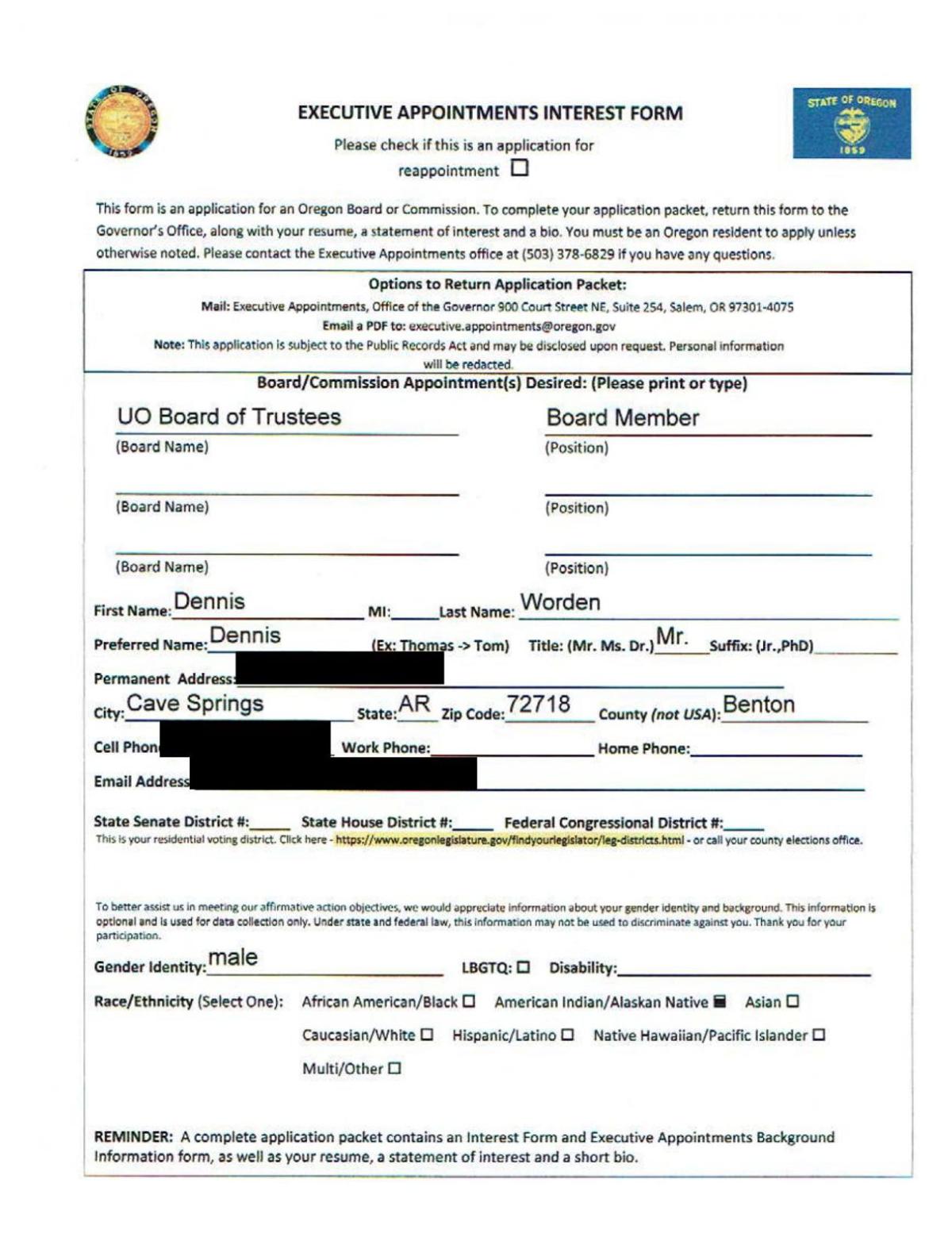 Dennis Worden graduated from UO in 2006 with a degree in geography and was awarded the UO Alumni Association’s Outstanding Young Alumni Award this year. He now works as a director in global regulatory monitoring and enforcement at Walmart in Arkansas.

“I am a young alumnus (’06) and believe that I can provide perspective of younger alumni on the board,” Worden wrote in his application. “I will bring significant experience working with large, high profile institutions while providing a perspective that will benefit the Board from a demographic perspective.”

A member of the Coeur d’Alene tribe, Worden was a Mark O. Hatfeild fellow after graduating from UO — in that role, he was a legislative aide to then-Portland Rep. David Wu on Oregon’s delegation to the U.S. House.

From there, Worden was a legislative assistant for the National Indian Health Board and the legislative director for the Native American Contractors Association before working in sourcing at Walmart.

Editor's note: The embedded documents were released by the governor's office in public records requests. That office redacted applicants' personal details, and the Emerald further redacted applicants' work phone numbers. The Emerald also redacted Wolf's contact information in the linked emails. The governor's office maintains copies of all records it has released on its website.