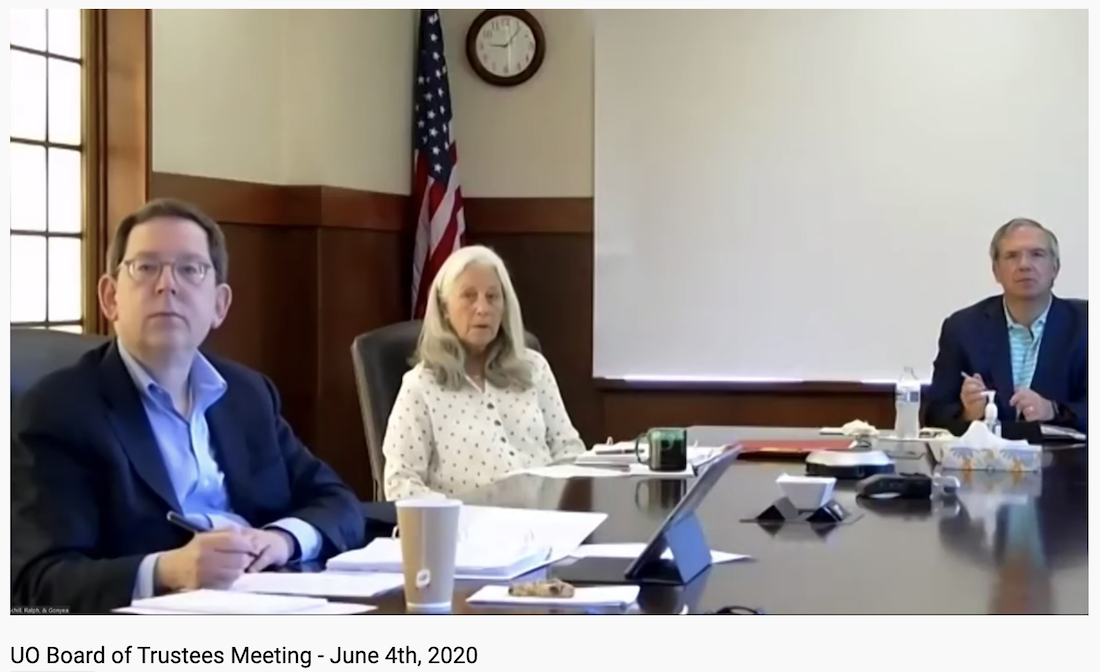 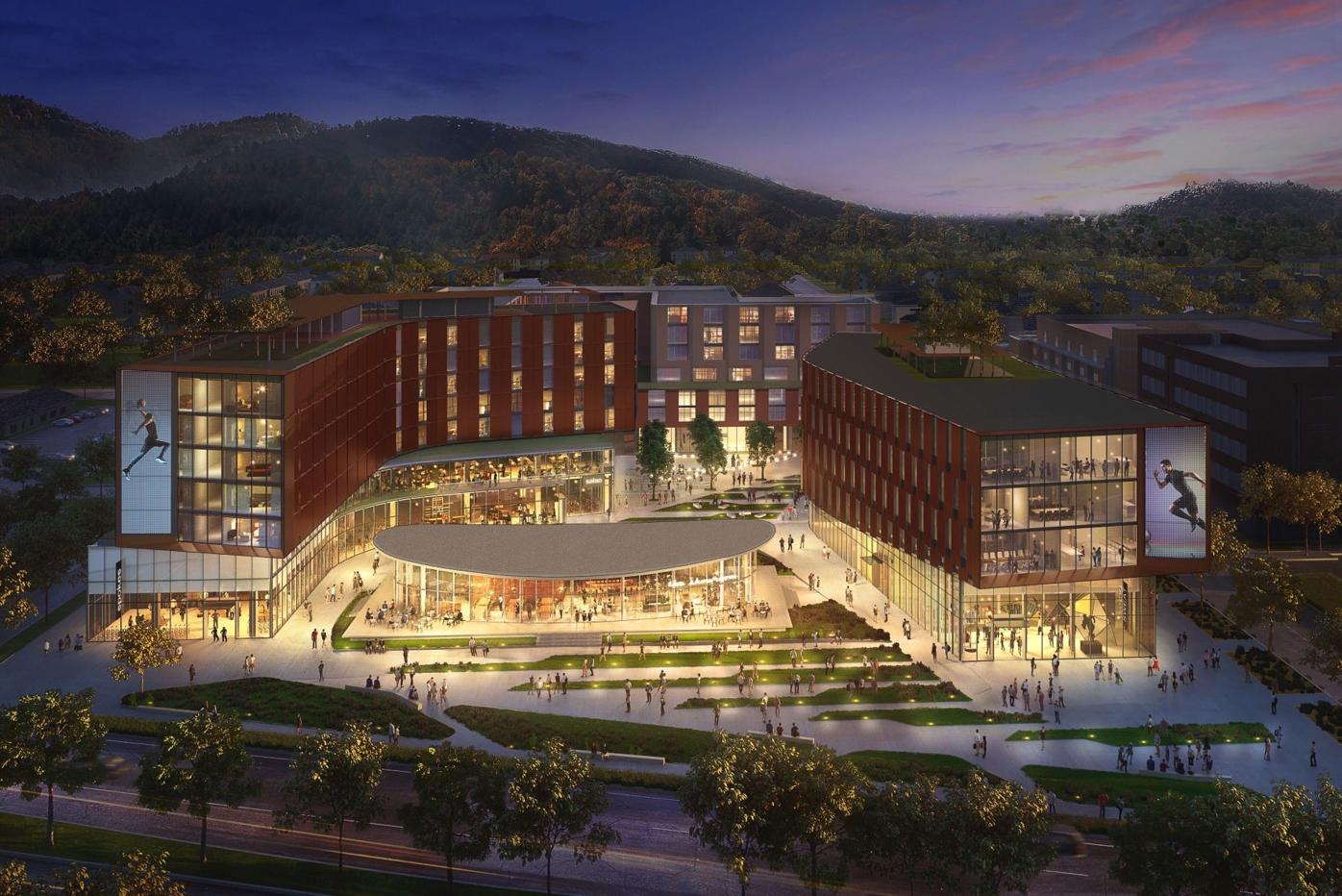 A mockup of the proposed University Village that may be developed at the Romania Lot. (Courtesy of the University of Oregon)

The University of Oregon board of trustees approved revisions to the student conduct code, finalized a bioengineering graduate program and discussed the impact of the COVID-19 pandemic on the university at a remote meeting held on Thursday.

“This has to be a one-of-a-kind board meeting for the university,” UO President Michael Schill said. The board of trustees requested public comments be sent via email the day prior, in order to have them read at the meeting. The board met over Zoom and broadcast their meeting over YouTube.

Schill acknowledged the impact that the COVID-19 pandemic has had on communities of color, and spoke of the killings of George Floyd, Ahmaud Arbery and Breonna Taylor. “I know our students, our faculty and staff — like all others in the community of Eugene — are hurting,” Schill said.

COVID-19 and the University of Oregon

The board of trustees heard from multiple sectors of the university on the institution’s response to the COVID-19 pandemic.

Schill said that reintroducing in-person teaching can only be done if it can be done responsibly and safely with approval from public officials, while meeting safety benchmarks. “That’s our optimal plan, but there are things about this that we simply can’t control,” he said.

In terms of UO’s Education and General Expenses, Vice President of Financial Services Jamie Moffitt said, the impacts were not as severe as expected. The projected impact was $5.9 million, with canceled study abroad programs, student withdrawals, waived interest and late fees and impacts to research.

The COVID-19 pandemic impacted auxiliary expenses, Moffitt said, through the shutdown of facilities like the recreation center, the Erb Memorial Union and some dining halls. The university fully refunded contracts for canceled housing contracts as well, she said. The net impact is predicted to be between $21 million and $22 million, she said.

“When we look to next year, there are very, very significant budget uncertainties that we are facing,” Moffitt said. It’s unknown what enrollment numbers will be for fall term, she said, which impacts tuition revenue. A 15% decline in enrollment — a number some national surveys of graduating high school seniors and college students cite — would equal $56 million in tuition revenue.

Funding from the state is also uncertain, Moffitt said. The Department of Administrative Services directed all state agencies to model out a scenario with an 8.5% biennial cut, equaling a 17% annual cut to the FY2021 budget. That would equal $13.9 million a year, Moffitt said. The state has not made any decisions relating to budgets, she clarified, while the timing for state budget cuts remains unknown.

The last time the U.S. experienced a recession, Moffitt said, universities raised their tuition dramatically to cover the costs. She said she’s been working to make it “loud and clear” that UO cannot make a similar decision.

Travel freezes, hiring freezes and senior leadership accepting a 10% pay cut — 15%, in the case of President Schill — are all actions taken relating to budgets, Moffitt said. Some employees are on a suspended-without-pay status but still receive some benefits, including health insurance.

The discussion of a temporary progressive pay cut plan has been brought up, she said, as leadership meets with different employee groups. Those who receive a larger salary will receive a larger pay cut, she said, with the intention of protecting the lowest paid workers.

He said that contact tracing and testing are both critical to the university’s phased reopening approach. Testing numbers are up in Lane County, LeDuc said, with 0.6% coming back positive, compared to Multnomah’s 4%. LeDuc said that university administration is considering ways to limit movement once students return in the fall.

“I have never been clearer about the role of the research university in society,” Provost Patrick Phillips said, “and that gives me strength just to make sure that we uphold that.” He mentioned the contributions the university made in terms of testing, going from “zero to making significant contributions throughout the state.”

Michael Griffel, director of housing, acknowledged that some people would be nervous about returning to living on campus but made clear that university housing has been working closely with Lane County Public Health, UO’s health center and UO’s incident management team, in conjunction with guidelines from the Centers for Disease Control and Prevention. The proposed 2020-21 readiness plan includes having appropriate isolation space in the event of a student contracting COVID-19, Griffel said.

He said that the housing model will use mostly double rooms, some single rooms and potentially some triple rooms — “a very few number of triple rooms with special requests in our largest residence hall rooms.” Academic Residential Communities will most likely employ a hybrid model, he said.

David Conover, vice president for research and innovation, said that, in early March, his office began asking all staff to begin planning for distance research. He is beginning a phased reopening, he said, currently in phase 0.5.

Only two people are allowed in a lab at the same time, he said, allowing labs to function at 50% capacity. Despite lobbying attempts, he said, it’s unclear whether there will be supplemental funding from the federal government to supplement grants lost with time in remote situations.

Vice President for Student Services and Enrollment Management Roger Thompson said that UO received a record number of applications for the 2020-21 year. However, he said, it will be difficult to see where admission numbers will be until after Oct. 1, after UO extended their decision deadline to Sept. 1. Because there will be no travel visas issued for Chinese students until November, he said, those numbers will be lower, as well.

Schill said that the university could see “somewhere between $20 and $80 million of lost revenue” in the next year. He said that if the university is in a position to lose any amount over $20 million, structural changes will need to be considered.

Conover has served as the Vice President for Research and Innovation for four years and is retiring in July. He offered a largely positive report about research and innovation for the university. He said that there is work being done for expanded undergraduate research funding.

Nathan Gawe, an economics professor and Ada M. Harrison Distinguished Teaching Professor of the Social Sciences at Carleton College, gave a presentation on shifting demographics in higher education. “I hope, at the end of this, I’ll leave you with a positive take on where we are in higher education, and where we might yet go,” Gawe said.

Gawe mentioned how, with the changing racial composition of the country, there has been a shift towards a non-white majority. He referenced William Frey, the demographer from the Brookings Institute, breaking down the years at which whites become minorities, based on their age groups. For those 18 and under, he said, “we see that that’ll happen this year.”

He spoke about educational disparities between different demographics, and the probability that certain individuals with specific economic and racial backgrounds will pursue higher education. “Now, in part, the experiences in Minneapolis over the last 10 days has made clear, these differences in probabilities are not something we should be content with,” Gawe said.

“We clearly can’t simply treat college goers as ‘here’s a person, and here’s a person,’” Gawe said. “We have to, at least, account for the differences in probability, and then we can talk about what we want to do about these vast differences and disparities.”

A new conduct code, a new degree, a new… hotel?

Usability was important in the process, he said, since the current version is “legalistic.” The new version should have an educational focus, he said, as well as being clear in articulating the lines of authority.

Girvan said the committee wanted the conduct code to be a policy document, while not “getting into the weeds of procedure.” The code should be a place to present principles, Girvan said, and allow other supplemental documents guide actions.

The rewrite includes both language and structural changes, to “underscore the educational purpose of the conduct process and to make the Code clear and readable to the primary audience of the Code: students,” according to meeting documents.

The rewritten code also includes an informal meeting in the Student Conduct Code process, according to the agenda, ensuring that individuals involved in the process understand their rights and their resolution options.

The board voted unanimously to approve the revisions.

The board voted unanimously to approve the new biochemistry graduate degree program as well. Lokey-Harrington Chair in the Department of Chemistry and Biochemistry Jim Hutchison spoke about the proposed program, a joint offering from both UO and Oregon State University.

The degree already received approval on behalf of the university senate, Lillis said. Phillips said that they hope to launch the program by fall 2020.

Assistant Vice President for Campus Planning and Facilities Management Mike Harwood asked the board to approve the terms and conditions for the proposed Romania lot ground lease. The board did not vote on whether to lease the land, Lillis clarified. “Once the economics of this are known, the board will see it again,” Lillis said.

The lease would last for 55 years, according to meeting documents, with two 10-year renewals. The base rent for the lease would be around $536,000 per year, with annual increases once construction begins. The board unanimously voted to approve the development of terms and conditions for the ground lease.

The board also recognized the 60 years Dianne Nelson worked at UO with a unanimous vote. Nelson worked as a telephone operator for UO. “Thank you, Dianne,” Lillis said to Nelson, who watched via YouTube. “My gosh, 60 years, what an accomplishment!”

Moffitt presented expenditure authorizations for 2021’s operating funds, seeking approval from the board. Because of the financial uncertainty, Lillis explained, Moffitt and Schill proposed setting the next year’s expenditure authorizations now. “And we all think that’s a conservative — or reasonably conservative — way to go forward,” Lillis said.

The FY21 operating expenditure authorization recommendation is to remain at the FY20 level, Moffitt said, with a proposed authorization of nearly $1.2 billion. The proposed expenditure for the capital expenditure authorization — the money spent by an institution to maintain or acquire fixed assets like land or buildings — for next year is around $160 million. Each quarter, the board can have a discussion, as needed, about fiscal adjustments based on new and changing information, she said.

The board carried the resolution unanimously.

Lillis proposed the delay of the comprehensive evaluation of Schill, five years into his presidency, due the “awkward” timing created by the COVID-19 pandemic. The motion passed unanimously. The board will move forward with their regular yearly review and take up the five-year review another time, Lillis said.