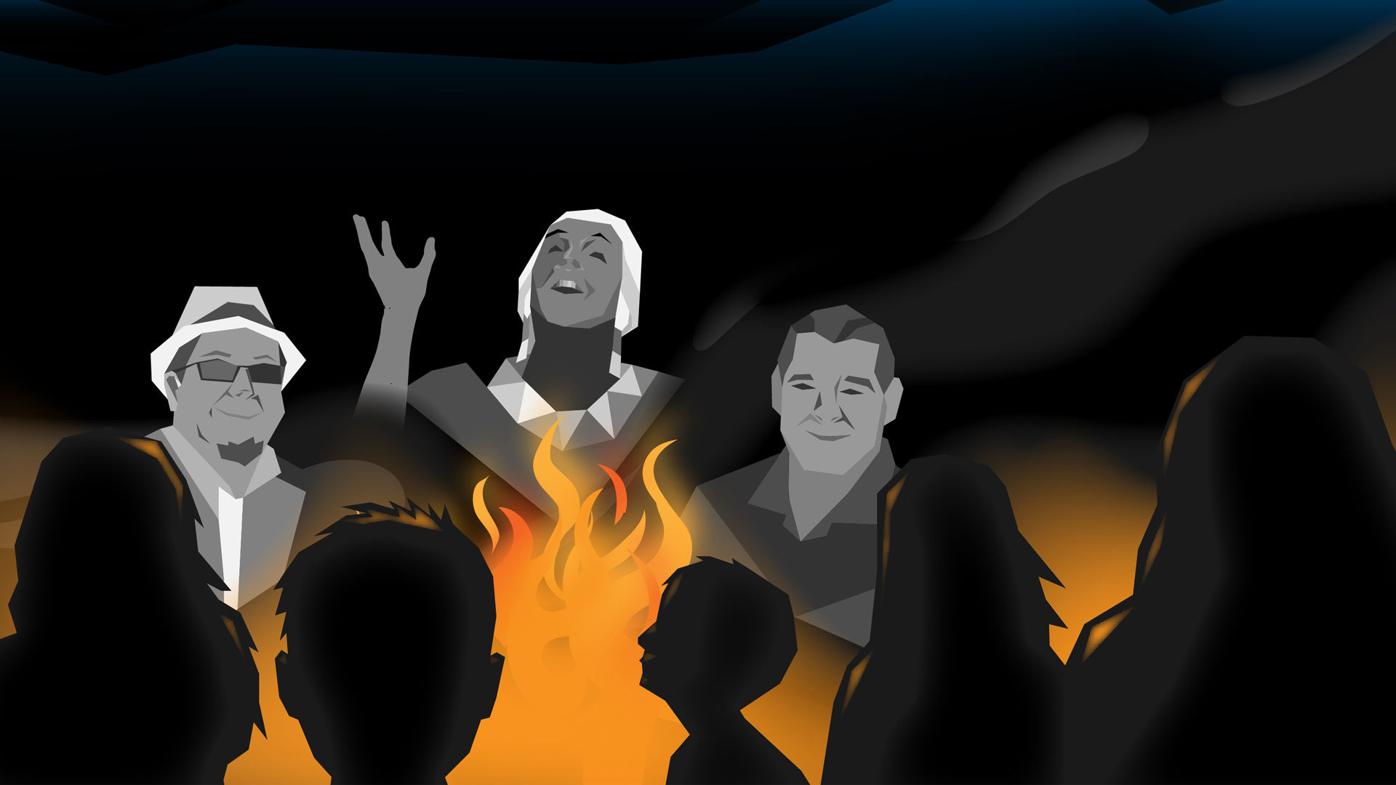 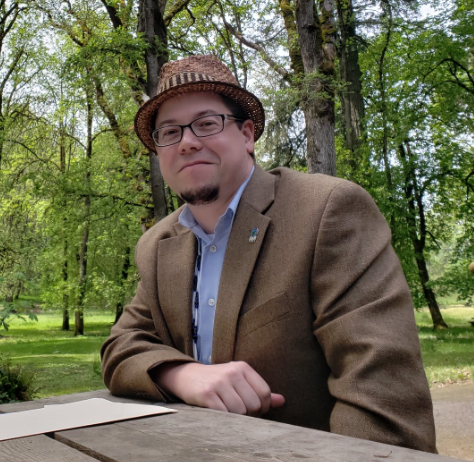 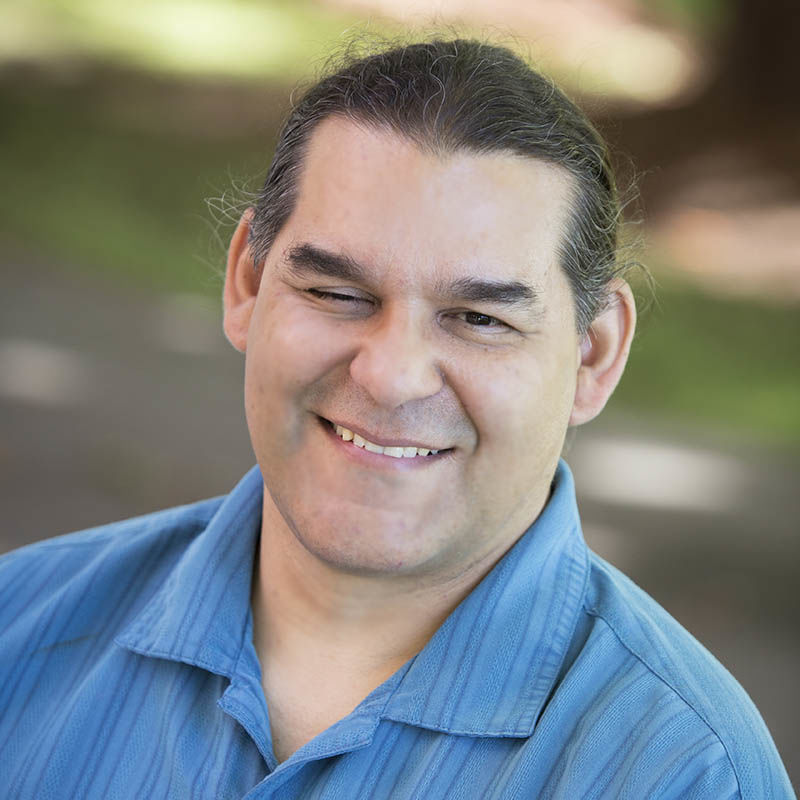 David Lewis has traveled the country in search of Kalapuya archival information. Lewis is an anthropologist and professor. (Courtesy of David Lewis) 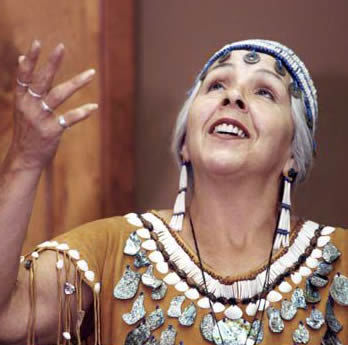 Esther Stutzman is the chair to the nonprofit Komemma Cultural Protection Association, dedicated to researching the Kalapuya. Stutzman’s performs Kalapuya oral histories and dance to preserve the tribal culture. (Courtesy of Esther Stutzman)

Esther Stutzman, of the Kalapuya tribe, knows there are certain stories that can’t be shared with just anyone.

These stories were passed down from the women in her tribe and held closely for hundreds of years. Stutzman won’t speak them over the phone. They aren’t to be written down or recorded. Some are performed in nature and recited to small gatherings. Some she tells to students in classrooms or at high school assemblies.

Some aren’t told at all.

They’re considered private property — one of the only treasures colonizers couldn’t take from the Kalapuya.

“I’m not just telling a history,” Stutzman said, “but a reinforcement of the morals of our society.

A few Kalapuya members are working to retain their culture and history that was nearly lost during the Native American genocide in North America. Stutzman, University of Oregon professor and anthropologist David Lewis and Grand Ronde historic preservation officer David Harrelson are trying to protect their heritage. While they all approach cultural preservation from a different angle, their mission statement is united: to ensure that the Kalapuya way of life is remembered in an accessible and thoughtful way.

Storytelling has long been used as an oral history of indigenous cultures. These stories are often all that’s left of civilizations that have slowly disappeared and been forgotten. Topics range from the creation of life on earth to interpretations of the way animals act and feel. They are windows into the origins of cultural traditions.

“Every story has a lesson or multiple lessons,” Stutzman said. “It’s a way of passing along these messages without preaching or pointing a finger.”

Stutzman is the chair of a nonprofit Kalapuya organization dedicated to research of Kalapuya culture. Living in Yoncalla, Oregon, 45 minutes east of Eugene, she lives on former Kalapuya land.

The Kalapuya used to occupy over a million acres across Oregon, according to Lewis, and the UO campus now takes up roughly 295 acres of that territory. According to Lewis’ forthcoming book “Tribal Histories of the Willamette Valley,” the recent loss of Kalapuya land and their decline begins around 200 years ago.

Between 1851 and 1887, the Kalapuya signed numerous treaties with the U.S. that aimed to take land from indigenous people. In the end, they had been forced to give up a million acres of land. What had once been 19 large tribes diminished to 12 small villages, before being moved to temporary reservations and then merging with the Confederated Tribes of Grand Ronde. The integration between the two tribes became significant to the genealogical heritage of the Grand Ronde Tribe. Despite the integration, retaining the Kalapuya history within the tribe is important for many.

He offers classes and support to tribal families in regards to preserving their customs and practices. He also helps run the museum that continues to tell the history of Oregon’s indigenous peoples.

“It's the persistence of our people,” Harrelson said. “All the work that we do is so that in seven generations, our children are still connected to who we are as a people.”

As a testament to the difficulty and complexity of piecing together Kalapuya history, David Lewis has spent 20 years traveling across the U.S. to find scattered fragments of their recorded history. He scours university archives and historical society repositories for any shred of data relating to the Kalapuya and Oregon’s indigenous past.

“You can find stuff about the Kalapuya in Berkeley and Seattle,” Lewis said. “There’s information in Washington D.C. and even as far as Yale.”

He’s combed through Department of War collections and sifted through old art materials. He’s read and scanned historical and journalistic accounts for the sole purpose of creating a single archive for Kalapuya history.

After collecting his findings, he uploads it to his blog. It’s an attempt to provide the Kalapuya multiple, cohesive perspectives on a cultural history that spans 14,000 years.

Lewis, who’s a descendant of the Santiam Kalapuya of Western Oregon, and former manager of the Grand Ronde Cultural Resources Department, understands the struggles of attempting to tell the convoluted history of the Kalapuya.

“There’s so many errors and mistakes that cause a misrepresentation of tribal life,” said Lewis, “because people weren’t going back and checking the sources and trying to make the history better and more clear.”

With historical data scattered across the U.S., Lewis believes he’ll likely be doing this for the rest of his life. Being able to accurately depict tribal history is paramount to the long-lasting cultural and historical traditions of the Kalapuya, says Lewis.

“So much of history is written by non-native people,” said Lewis. “I have a responsibility to get it right as much as possible. I’m getting the information out in a public forum so that everybody has access to it. There needs to be accurate sources that we can use to teach kids and other people about the history.”

Because of the possibility of error in the rewritten histories, misrepresented by outsiders, original stories are valuable windows into Kalapuya traditions.

Stutzman, an enrolled member of the Confederated Tribes of Siletz, is a descendent of the Coos and Komemma Kalapuya indigenous peoples. She currently travels around the state telling stories that give an overview of Kalapuya culture, bringing along family heirlooms and drum sets as visual illustrations.

Stutzman's grandmother told her that it was bad luck to share certain stories with outsiders. But with a hope to preserve Kalapuya culture and let it flourish again, she has 13 stories that she shares with the general public — offering a direct view from a Kalapuya member into her culture. These stories are usually told with a number of performative elements. There’s drums, dance, props and tools to help re-enact past storytelling traditions.

“I want to make sure to preserve the stories that were passed down to me from the women elders in my tribe,” Stutzman said. “In order to understand, there is a certain way they should be experienced.”

But not much is known about the dances and music of the Kalapuya. Stutzman is the chair of a nonprofit organization dedicated to researching Kalapuya culture. The Komemma Cultural Protection Association has dedicated a large portion of the research to Kalapuya dances.

Other work is being done to preserve other aspects of Kalapuya heritage, adapting technology to reach a younger generation.

Harrelson knows that the way we tell stories and convey meaning is ever-changing. While the centuries-old methods of indigenous storytelling don’t always translate into a digital medium, Harrelson seeks to help the tribes adapt and grow with digital media.

“We need to indigenize technology, not allow technology to take us over as a culture,” Harrelson said. “So how do you apply cultural teachings, values, knowledge and information into a way that uses technology to our benefit?”

One of the first projects that sought to overcome this technological barrier was the Chinuk Wawa language app. Designed and created by the Grand Ronde Tribe, the app offered language lessons for English speakers to learn the dialect of the tribe. The app also includes basic tribal history, historical photos and songs and stories about the Chinuk Wawa.

“We've realized that there are people that want to talk about this subject,” Harrelson said. “They want to know the old stories and to talk about the customs and traditions that relate to the tribes. It’s about finding ways to make information that was probably extracted by an anthropologist like Lewis more accessible.”

These three Kalapuya guardians, Stutzman, Lewis and Harrelson are not alone in their work, but the task they face is a lifelong pursuit. Unlike some cultures that already have anthologies, libraries and university majors dedicated to their study, Kalapuya culture doesn’t have the same recorded history. But the work being done can change that for future generations.

“The Kalapuya people have always been here and will always be here,” Harrelson said. “We’re just trying to translate what the current world around us means in relation to the teachings of our ancestors.”