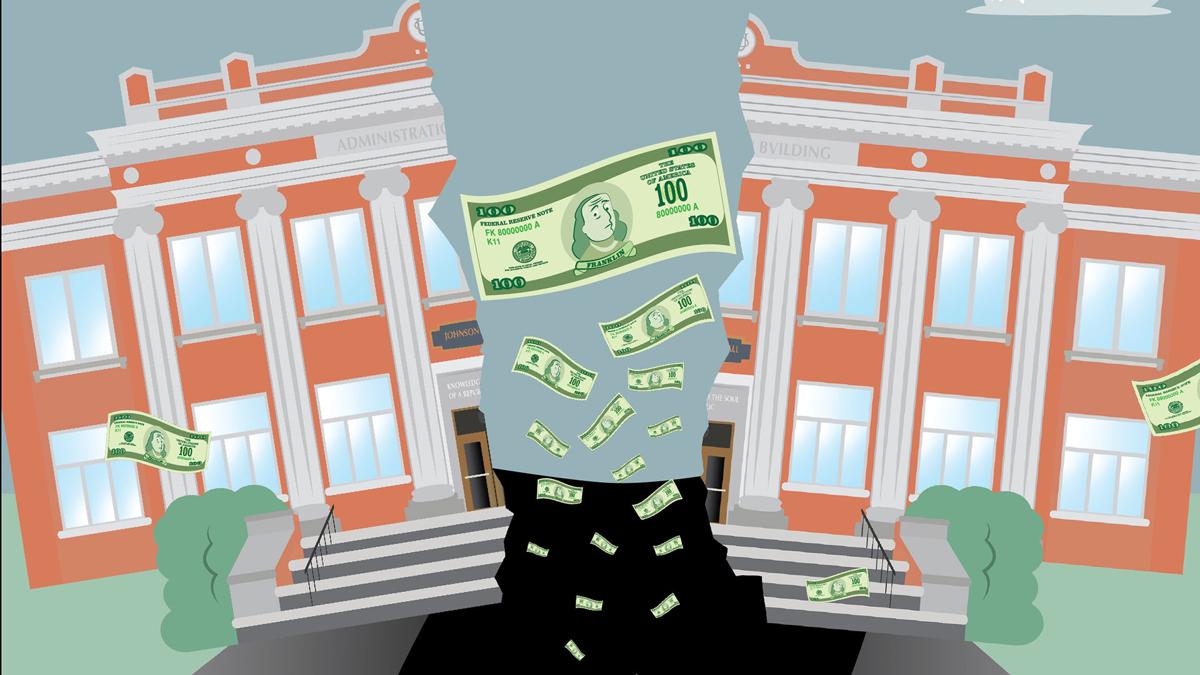 Protest signs in hand, more than a hundred people packed the Ford Alumni Center ballroom last week to make their voices heard by the University of Oregon board of trustees. For more than two hours, about 35 students, faculty and graduate employees spoke to the board during the meeting’s comment period.

The existential comments from Ludwig, a GE and fifth-year doctoral candidate in the psychology department, echoed the sentiment shared by each of the speakers: that the university shouldn’t balance the budget “on the backs” of students and staff through tuition increases, contract changes and program cuts.

The packed showing at the board meeting was a sign of a controversy which has been brewing under the university’s surface the entire year: a budget crisis on the order of $34 million.

That number represents what UO Chief Financial Officer Jamie Moffitt calls the “gap to fill.” That’s the total amount that the university’s expenses are projected to exceed its income next year.

This year, that number is “larger than any number I’ve put up in front of a TFAB ever before,” Moffitt, who’s held this role for eight years, told the Tuition and Fees Advisory Board in January.

Among a variety of roles, Moffitt is responsible for coordinating and planning UO’s budget from year to year. While advisory boards, state influence and university officials with long titles complicate the picture, the university’s task is basically the same struggle that every one of its employees – and students, personally – deal with, too: making ends meet.

This year, however, that will be harder for the university than it has been in the past, as operational expenses for the next year are projected to increase by about $24 million.

That leaves a few options for “making ends meet” in the coming year. UO can spend less on some other costs, like the faculty and staff who execute the university’s educational mission. It can try and convince the state legislature to contribute more money. Or it can ask students to pay more to attend classes.

The university’s main budgeting account — the one that tuition and state operational funding go into — is what’s called the “Education and General” fund. That fund covers faculty and administrator salaries and expenses for the basic operations of the university, while other funds are used for things like new buildings, athletics or university housing.

The university's budget hurdles come in the form of increasing operational costs that the E&G fund has to pay for. Chief among those increases is a spike in required payments to Oregon’s Public Employee Retirement System, which the state mandates the university contribute to for former employees.

This year, those costs are projected to increase about 14 percent, or $7.6 million, under the state system’s requirements, according to university financial documents. What’s more, PERS costs are recurring, meaning that similarly sized increases will occur every other year.

The future of PERS requirements remains uncertain, as the Oregon Senate held a dramatic vote last week to make changes to the system. However, the fact remains that for this year the required contributions on the part of the university make up about a third of the university’s new costs.

The rest of “the gap” between revenues and expenses comes from this year’s budget deficit which, CFO Moffitt told TFAB in May, “has gotten worse and worse” every quarter this year.

Those salaries were a central topic at last week’s board meeting — and of considerations about the budget, as they make up about 80 percent of E&G fund expenses.

In one attempt to close the gap, university officials released a proposal in March to cut $11.6 million in expenses for the next year. The plan — which UO President Michael Schill told trustees would be finalized early this week — includes cuts to every school and college and many other programs and departments, according to board documents.

While certain departments and programs such as UOPD, career advising and fundraising are protected from cuts, other programs face large decreases. Each of those cuts impacts the lives of the university employees staffing those areas, and those opposed to the cuts say they hinder the ability of the university to achieve its mission.

The largest proposed cut, relative to department budget size, is slated for the Labor Education and Resource Center, which will be asked to reduce its expenses by about half. That means, said LERC Professor Gordon Lafer, three of the center’s six faculty will have to be let go.

“It would be devastating. It cuts half of our budget,” Lafer said of the proposal. “You take a six person department and cut in half, it’s devastating to the department. We’d have to cut a lot of the big programs that we do.”

The LERC, Lafer said in an interview, extends UO’s educational mission by educating about 2,000 workers a year on union organizing and labor laws and by conducting state-level research on the economy.

“The [purpose of LERC’s academic] extension side is to bring the expertise and resources of the university to help Oregon workers beyond the boundaries of campus,” Lafer said.

Lafer made similar comments to the board of trustees, as did a number of other speakers at the meeting. While Lafer spoke, encouraging the board to make up for the budget deficit with cuts to administrator salaries, volunteers unraveled a list of about 1,200 people who’d signed a petition to “save LERC.”

President Schill defended the proposal, saying at a forum earlier in May, “The further away you go from directly serving students, the more likely you are to get a cut.”

Though other employees face proposed cuts, the plans for LERC drew the most attention among the meeting’s speakers, with some going so far as to accuse university administrators of using the budget crisis as an opportunity for “union-busting.”

The meeting’s final speaker addressed those very fears. Kurt Willcox was one of the original members of the board of trustees in 2014 and returned to this meeting to speak to the current trustees.

The public service mission Willcox referred to is a central point in the discussion of the university's finances: How much should the state pay for the university’s contributions to the state?

At the current phase of the university's budget, the single-largest lingering question is how much the state will allocate to the university for the next year. In other words, how much of the rising costs of PERS and new contracts they’re willing to cover.

That amount will likely vary between $200,000 and $8 million, based on how much the state allocates to the Public University Support Fund. The PUSF funds each of Oregon’s seven public universities, a number so important to administrators that next year’s resident tuition is directly linked to it.

As the legislature slowly moves to finalize that number, UO is advocating for it to be on the higher end of that range. Hans Bernard and Libby Batlan both serve as lobbyists for UO, spending most of their days in the state capitol, trying to convince legislators about the importance of “investing” in the state’s universities.

This year, according to the pair, was unique in that Oregon universities worked together to make the pitch for greater funding.

“Come June 30 when the budgets are passed, we’ll see where we land, but I do think that there has been a unified advocacy front across all stakeholders in higher ed that I haven’t seen since I’ve been at the U of O,” Batlan said in an interview. “I think it’s contributed to our success thus far.”

Also unique for this year was the outcome of the financial projection the state puts together to make budgeting decisions. This year, the state’s projected tax revenue was up significantly over what was expected, said Batlan, which could be good news for UO.

The question left for the state legislature is exactly where to spend that money.

For the second time this year, the board of trustees took another step to close the gap when it voted to increase resident tuition for the next academic year at last week’s meeting. It did something similar in March with the approval of an increase to nonresident tuition.

The approvals mean nonresidents will pay about $990 more for 45 credits next year, with residents paying somewhere between $434 and $935 more, depending on the state’s contribution and final rate approval in the coming months.

The strongest opposition to proposals to increase tuition came from ASUO executives and student members of TFAB, who submitted a minority report to the board.

“I think they maybe see us as expendable. As in, ‘They can suffer now as long as the students in the future won’t have to,’” said Imani Dorsey, outgoing ASUO internal vice president and TFAB member. “We should be making strides for it to happen as soon as possible. I know change happens really slow, change doesn’t happen overnight, but it can happen as soon as possible if we put in the effort to do that.”

In an interview with the Emerald in January, Dorsey expressed hope that university would consider “creative solutions” to the budget problem over the course of the year.

After several months on TFAB, however, Dorsey said she didn’t find that the university had taken a hard enough look at those solutions, like moving money from the “protected funds” for construction or athletics or changing the requirements of donations to the university.

The university has picked some solutions to cover the gap between its paycheck and its increased costs: a mix of cutting programs and staff, charging students more for classes and lobbying the state legislature for increased funding.

That combination, however, leaves any number of questions unanswered: Will the state pay? What happens to the staff who have to go? What about the students who can’t afford to pay more?

More than those questions, though, the university’s current moment — the “gap,” the “crisis,” the cuts, the increases to tuition and the protesters at meetings — represents the much larger hurdle the people of Oregon are currently facing:

What’s the purpose of this public university? And who should have to pay for that?

Zack Demars is the Daily Emerald's associate news editor. He's into politics, people and black coffee. You should send him tips, pictures of your dog or your favorite vegetarian recipes at [email protected]