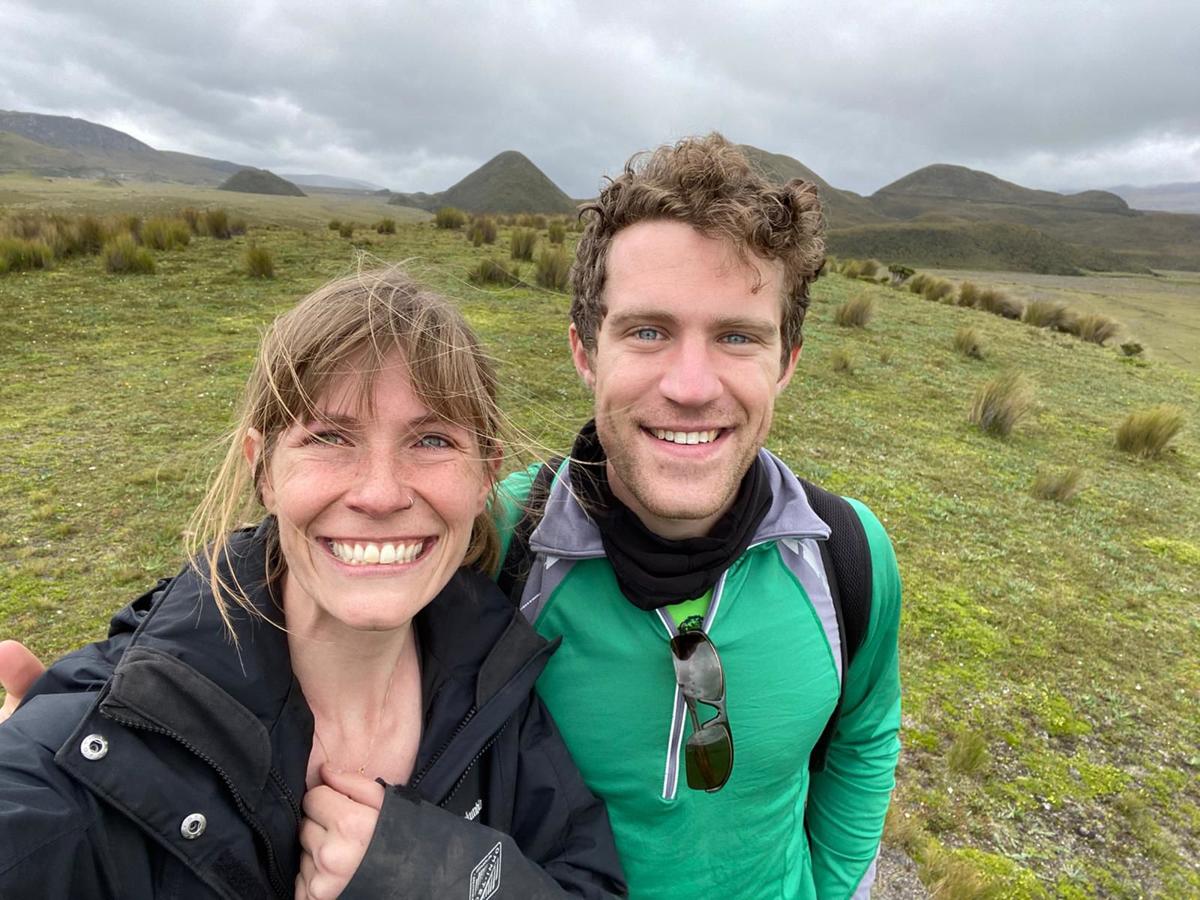 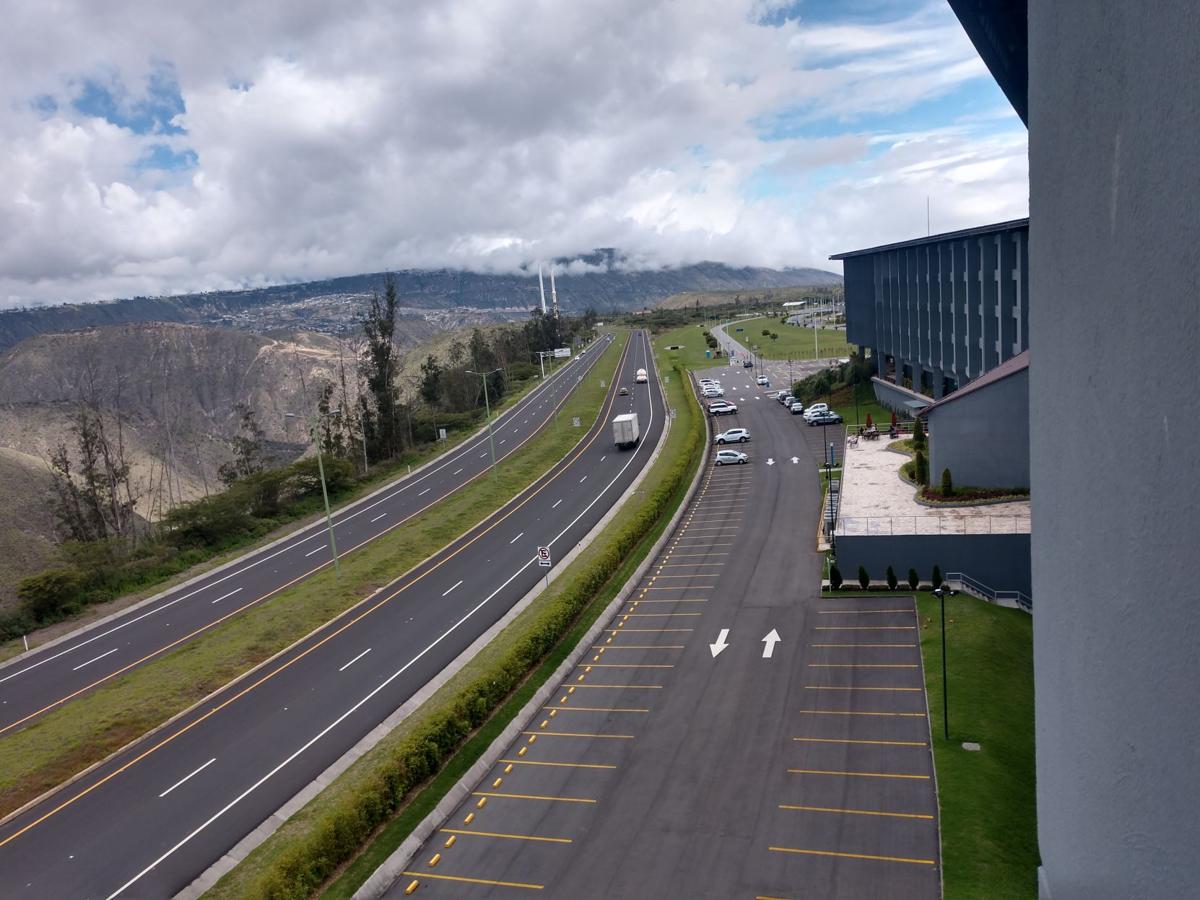 A view from Dlouhy and Hamilton's hotel room in Quito, Ecuador. Dlouhy said that the street is usually "normally wall to wall traffic." (Photo courtesy of Curtis Dlouhy)

A view from Dlouhy and Hamilton's hotel room in Quito, Ecuador. Dlouhy said that the street is usually "normally wall to wall traffic." (Photo courtesy of Curtis Dlouhy)

Three hours before University of Oregon PhD student Curtis Dlouhy and his partner were scheduled to leave Quito, Ecuador, they learned their flight was canceled. They had already printed out their boarding passes and checked in for their March 18 flight, but Avianca, the airline they booked their flight with, canceled the night before only to tell them the morning of the flight.

Avianca said the next flight out of Quito would be on April 1.

Today, after staying in a hotel near the Quito airport with other groups of stranded Americans, Canadians and Australians, Dlouhy and his partner Sara Hamilton, a PhD student at Oregon State University, are flying to Miami on an eight-person charter flight.

“Sara and I decided that it was worth taking the hit to our savings accounts because we don’t even know that this hotel is going to be open,” he said, adding that all eight passengers are splitting the $42,000 expense. “We don’t feel comfortable staying here any longer than we have to.”

The COVID-19 pandemic has radically reshaped life across the globe as bookings are canceled, airplanes are nearly empty and cruise ships are being considered as makeshift hospitals. The Wall Street Journal reported last week that the pandemic poses the biggest business threat to airlines since 9/11 and that analysts at investment bank Jefferies estimate that 2,000 airplanes have been grounded.

Dlouhy, who is working on his dissertation about how fracking impacts the coal markets, said the pair made their vacation plans only a few weeks before leaving on March 4.

They watched the developments of the COVID-19 coronavirus closely. “About a week into our trip we noticed things were ramping up pretty quickly,” Dlouhy said.

Things did escalate. Earlier this week, Ecuador closed its borders for three weeks and the U.S. State Department told Americans not to travel internationally, advising that Americans still abroad should make plans to come home “unless they are prepared to remain abroad for an indefinite period.”

That very well could have been Dlouhy and Hamilton. Dlouhy said that the flight was canceled because it wouldn't have been profitable to send a flight to South America for several weeks. Dlouhy also said that Avianca told him the Quito airport was closed, when in fact it wasn’t. The U.S. Embassy suggested that Dlouhy contact Avianca, which has gone poorly:

“Every time we get on the line and we give them our flight info and it gets dropped after 40 minutes,” Dlouhy said. He said he has not received a refund for the canceled flight.

A spokesperson for Avianca did not immediately return a request for comment. The airline’s website notes that it is currently receiving a high volume of calls.

But Avianca wasn’t the only problem — the State Department didn’t provide much assistance either. Dlouhy said that while trying to figure out their plans, he and other stranded travelers were contacting their representatives in Congress.

“They are the brick wall stopping us from getting back in this country,” Dlouhy said of the State Department, but added that individual government officials like Merkley had been helpful.

A State Department spokesperson said that the Department “has no greater priority than the safety and security of U.S. citizens overseas” and provided the Emerald with resources for Americans abroad.

Sara Hottman, a spokesperson for Merkley, said that the senator had a call with a deputy undersecretary in the State Department on Friday to continue advocating for evacuating Americans.

“Progress is being made, but Sen. Merkley is urging them to move faster,” Hottman said.

Dlouhy, originally from Nebraska, said that his representative, Jeff Fortenberry, had helped him and Hamilton to find the charter flight.

“My trust in the U.S. government has gone down at the highest level, but my trust level of individuals who advocate for their constituents has gone up more,” he said.

Dlouhy said that capacity to advocate shouldn’t have to come from individuals, but should come from the government, saying that it’s “very disappointing that the government we all trusted to help us has failed us so miserably.”

Dlouhy and Hamilton are leaving Friday and said that they are optimistic they will get back to Oregon in a few days, but recognize that others aren’t so lucky. He said that during the time the travelers have been stuck, they worked closely with one another and developed a good rapport.

Tips and advice from the State Department: