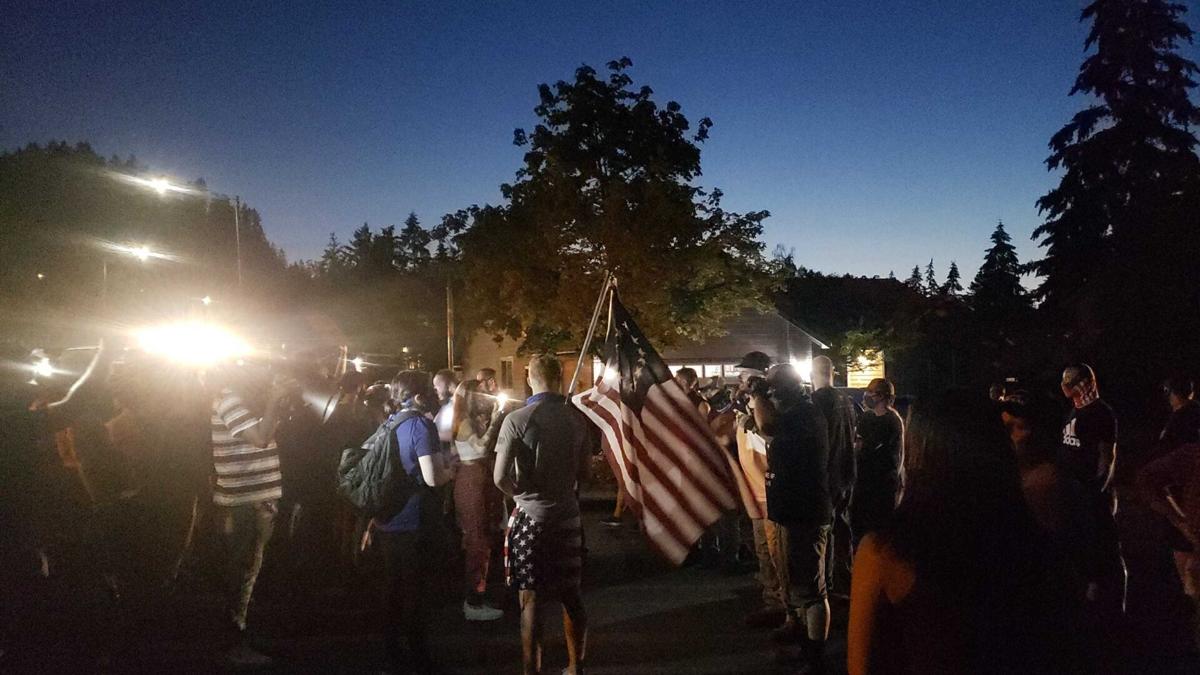 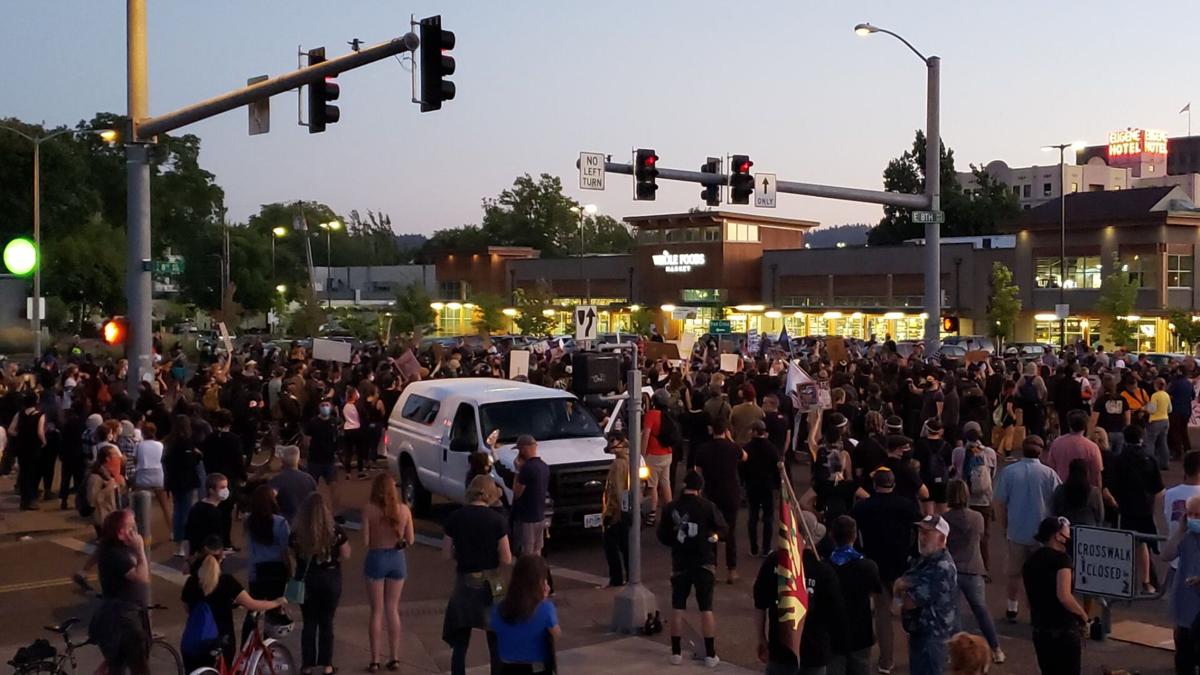 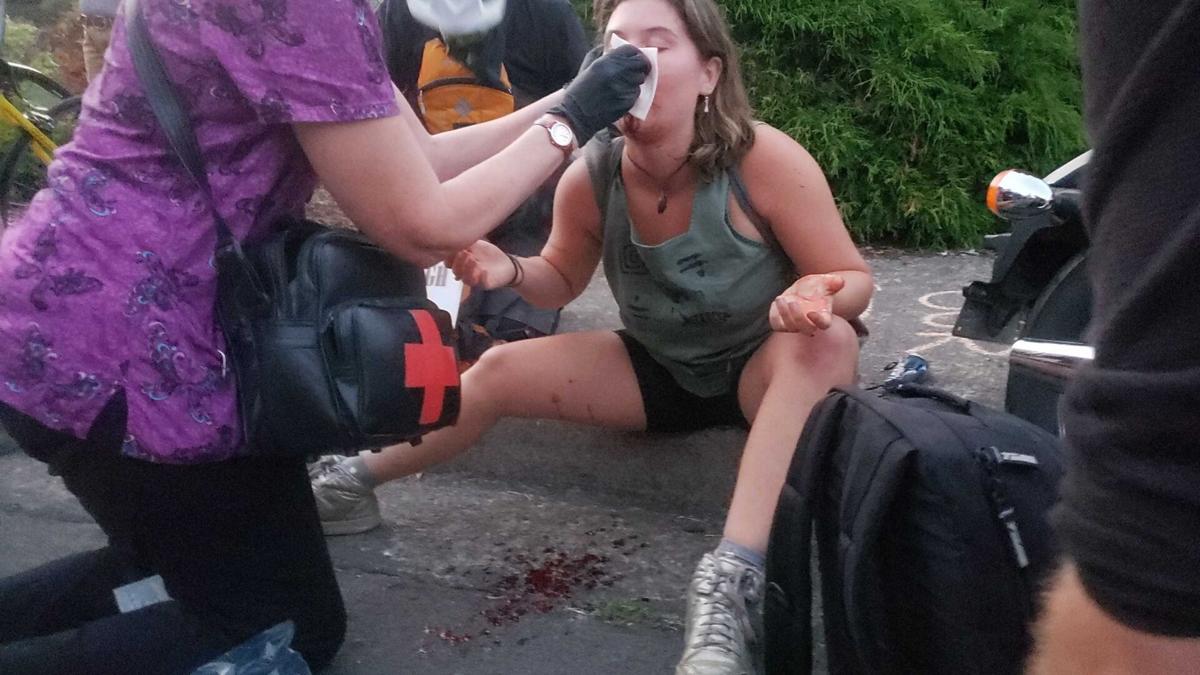 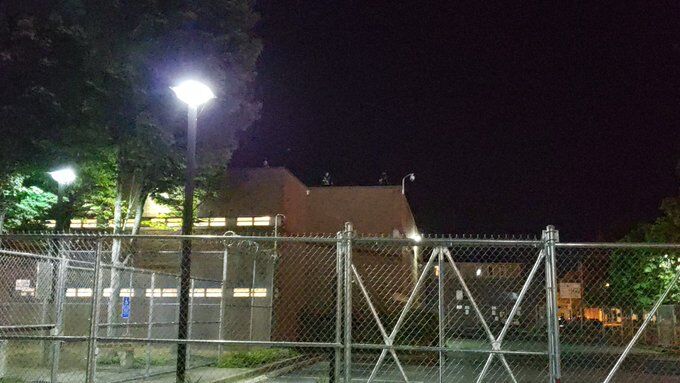 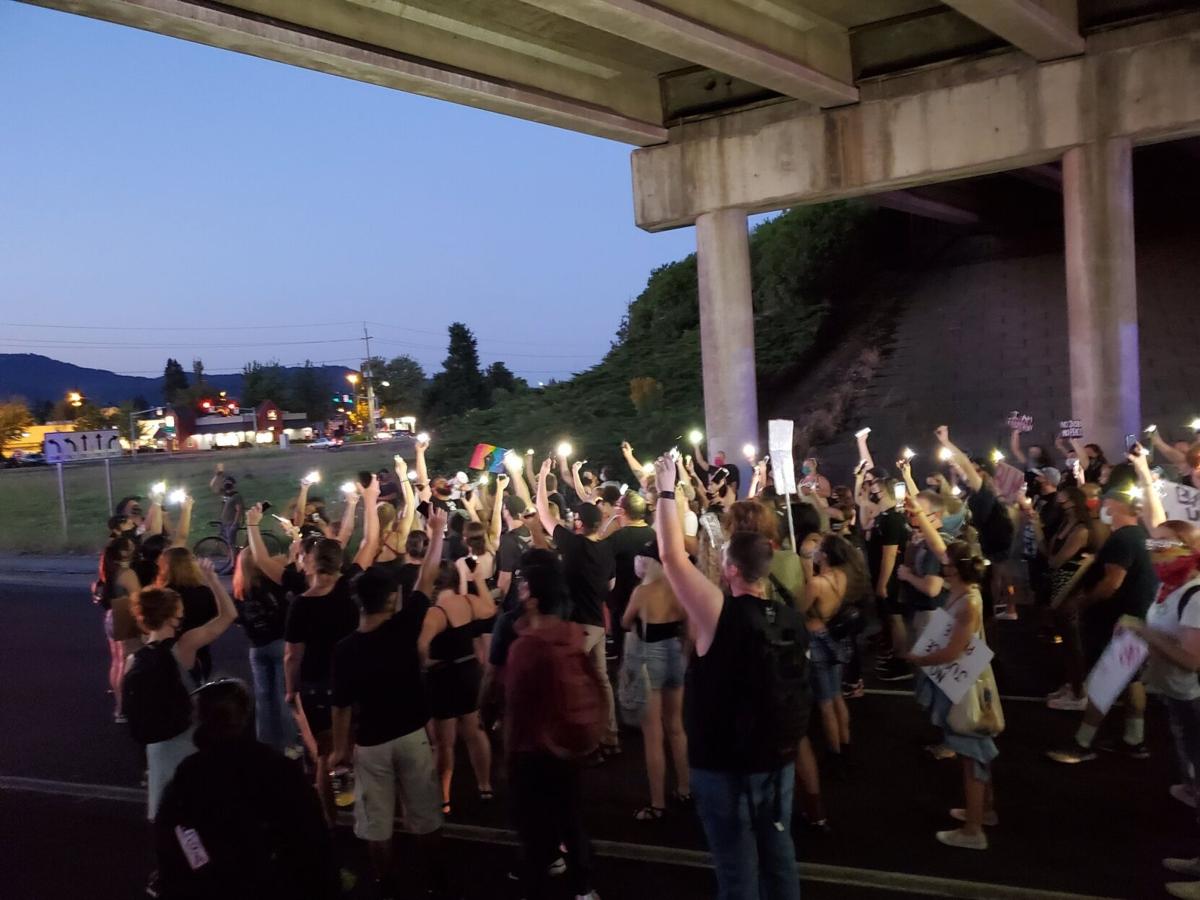 The group illuminated the underpass on Pioneer Parkway while chanting on the night of July 30. (C. Francis O'Leary/Daily Emerald)

The PNW Youth Liberation Front hosted — with promotion from Black Unity and BIPOC Liberation Collective — a Portland Solidarity Protest in front of the federal courthouse in Eugene starting at 8 p.m.

A flyer for the event said “bloc up, mask up” and that a “diversity of tactics” were encouraged with “no peace policing,” or telling others how to protest.

Within 20 minutes of the event starting, a counter-protest of approximately 60 people approached the protest, many open-carrying firearms and wielding American flags or homemade shields.

One man discharged his firearm skyward and was later arrested by the Eugene Police Department. In a separate incident, a vehiclist drew his weapon on the crowd only to be met with an anti-racist protester with his own handgun.

The group marched downtown where some protesters graffitied buildings with spray paint and smashed windows at several businesses, including Wells Fargo, Whole Foods, Elk Horn Brewery and Goodwill. The vandalism resulted in the Eugene Police Department declaring the group to be riotous. EPD later deployed pepper-balls and tear-gas in a residential neighborhood in an attempt to disperse the crowd.

Some protesters criticized members of Black Unity — who promoted the “no peace policing” event — for trying to stop other protesters from vandalizing Wells Fargo.

Another protester got out of her car and defended the vandalism. “These banks don’t care about you. They don’t value your life,” she said. “Stop trying to please the white man. Stop trying to look good for the white folks.”

BLC, along with Lane County Mutual Aid and several other affinity groups, hosted a “feed-in” in Monroe Park. There, activists distributed free food to anyone who wanted it and educated the crowd on a range of topics.

The first class was on “black bloc,” the practice of a crowd of people all wearing entirely black clothes to a protest and covering their hair face and any remarkable features. Activists use the tactic to make it harder for law enforcement to identify and track any one individual in a crowd.

Other classes covered topics from tactics government agents have used in the past to recruit activists to become informants to the history of militant labor movements in the U.S.

Later that day, in response to the tear-gassing the previous night, a protest — not hosted by any single group — formed at the federal courthouse starting at 9 p.m.

Snacks, a local protest medic said, "There is no leader. We are here organically to bring our skills, our people together because last night there was an affront on protesters.”

During that march, an independent photojournalist walking amongst the group allegedly assaulted a woman, leading other protesters to wrestle him to the ground.

While there, a protester within the group began interrogating a man with a full-face gas mask, a military-style helmet with “press” taped on and open-carrying a handgun who wouldn’t identify if he worked with a local news outlet or other news source.

Following a struggle for his cellphone, the man drew his weapon and protesters chased him down the street. EPD eventually arrested the man in the presence of EPD Chief Chris Skinner.

The group stayed in front of the jail for an hour and marched — with homemade shields in the front — toward EPD officers who mobilized behind the building where the march was planning to go.

Around 12:05 a.m., EPD declared the group an unlawful assembly and threatened to deploy tear-gas and projectile munitions toward the peaceful protesters.

Protesters announced that EPD’s floodlight directed towards the crowd was causing somebody to have a seizure at 12:13 a.m.

The crowd knelt and screamed for medical attention. Protest medics eventually took the afflicted person away for treatment.

After a few tense moments of criticizing EPD for turning their light off-and-on, loudly pleading for dialogue with a commanding officer and the crowd, taking steps forward, an officer invited a member of Black Unity for a conversation.

Ten minutes later and after another protester came up and said, "This is looking bad for us. We need to go." The BU leader returned to the group prior to leaving due to reports of Proud Boys, classified as a hate group by the Southern Poverty Law Center, circling the area in a pickup truck.

The protest ended at 1:45 a.m., and those who were still present left using the buddy-system.

Black Unity hosted a protest and march in the Thurston neighborhood beginning at Jesse Maine Memorial Park at 7 p.m.

The group had several confrontations with counter-protesters as soon as the event started. Within 90 minutes, Springfield Police Department blocked them from proceeding with their march.

Several other protesters and members of BU leadership were injured.

Following the standoff and SPD’s eventual escalation, the group redirected their march back towards the park.

Once there, counter-protesters blocked BU’s vehicle from leaving, forcing SPD to intervene after approximately 10 minutes.

Down the street, counter-protesters reportedly attacked the BU vehicle and assaulted a member of the Wall of Moms, left laying on the ground. A nurse who lived nearby rushed out of her house and told SPD officers to “fuck off” when they tried to stop her from attending to the woman.

After medics cared for the woman, an ambulance took her to a hospital. The remaining people slowly filed out.

The protest’s first destination was the home of Springfield Mayor Christine Lundberg. Protesters asked Lundberg if she supported the police after the violent arrests SPD made the night before. The mayor eventually answered yes.

The march proceeded to the Springfield Jail, where several activists spoke about holding the police and media accountable, the importance of remaining non-violent at protests and the criminalization of Blackness.

After the speeches concluded, the march returned to its starting point.

Throughout the protest, counter-protesters and local residents heckled marchers, but the confrontations never escalated into shouting matches nor turned physical. Though some Springfield residents pestered the protesters, others took to their porches and driveways to voice support or raise a fist in solidarity.

James is a News and Film/TV reporter. Outside of reporting for the Daily Emerald, he is a former reporter and copy editor at LCC's The Torch, has contributed to KISS vinyl guides as a collector and is a vintage vinyl dealer.