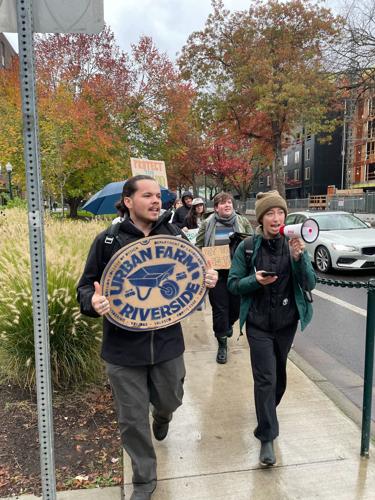 Save the Urban Farm co-organizers Kaleb Beavers and Jenna Witzleben. 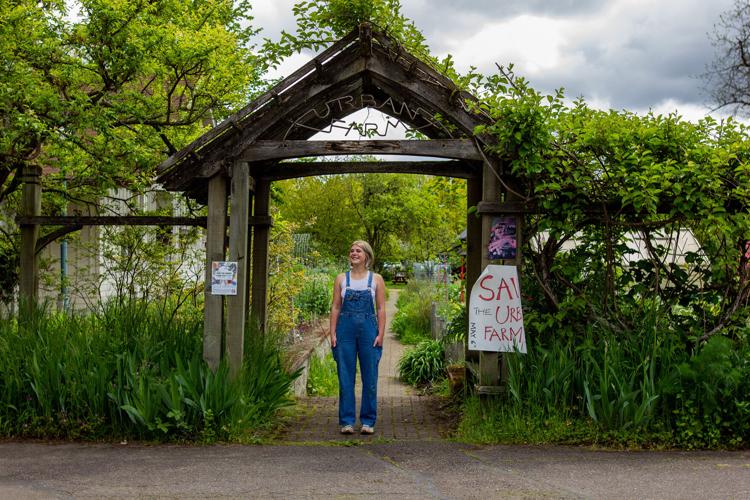 Members of  Save the Urban Farm, students and supporters alike, gathered on Nov. 4 to rally against the ongoing development for phase II of the Knight Campus.

According to their Instagram page, Save the Urban Farm is a cross-departmental group of students aiming to prevent Knight Campus development from harming the Urban Farm.

Starting behind the University of Oregon law building, the group marched through campus, gathering at the Erb Memorial Union amphitheater where Save the Urban Farm organizers gave individual speeches.

“Honestly, I’m pissed off,” graduate student and Save the Urban Farm co-organizer Kaleb Beavers said during his speech. “The importance of the Urban Farm and the Back 40 is abundantly clear to all of us,” he said.

The Back 40 area of the farm consists of soil beds used by student teams, according to the Urban Farms website.

In a post on their Instagram page, the group is advocating for protecting existing farm space, prioritizing student and farm staff voices in future farm planning and protecting farm spaces post-phase II development.

“We are here because despite the UO’s messaging that it is an environmentally conscious school they want to level a vital part of the campus environment,” Beavers said.

Over the summer, UO announced it was putting $1 million toward additional space for urban farming on campus, according to an article from Around the O. “I want to express what an incredible win that is for the student body,” Save the Urban Farm co-organizer Grace Youngblood said during her speech.

Youngblood said money will be used to expand the Urban Farm operation to the new Urban Farm riverside site. “This is a lot of new space and money. How do we want to see it used?” Youngblood said.

While a win for the group, Youngblood said the money does not ensure the preservation of the Back 40 and is something they are still fighting for.

Youngblood said the area includes upwards of 50 trees with some being over 100 years old, along with soil that has been cultivated since the early 1990s.

Graduate student Tara Olson is taking a class at the Urban Farm this term. She said the possible effects future Knight Campus development might have on the Urban Farm are discussed every class session.

“We’re there in the space that won’t be there in a little bit,” Olson said. “Most of the work that we have been doing has been to protect as much as we can,” she said.

Clara Andrews isn’t a student at UO but said she has had many special moments at the farm. She learned about Save the Urban Farm from Beavers, her roommate. “It’s very frustrating to see that money is more important than educational spaces like the Urban Farm,” Andrews said.

A new era for the Register Guard

Breaking: Students evacuated from multiple halls due to chemical spill