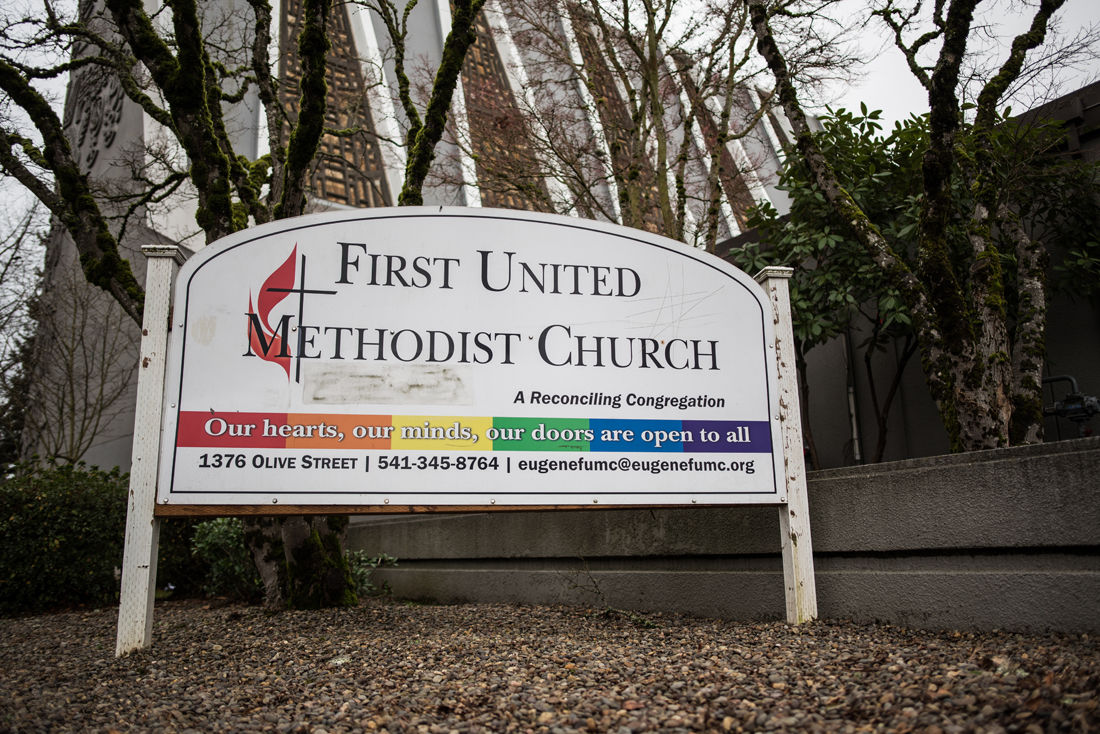 “Our hearts, our minds, our doors are open to all.” First United Methodist Church is one of several churches in Eugene, Ore. that is openly accepting of the LGBTQ+ community. (Marissa Willke/Emerald) 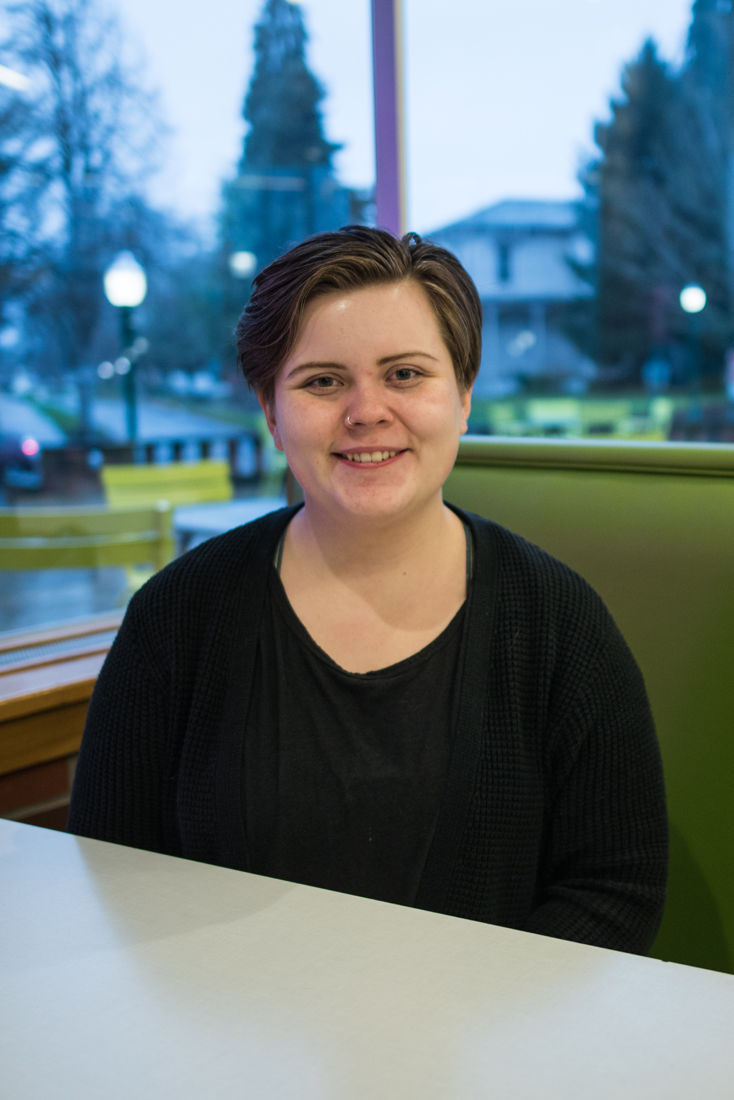 Kylie Davis graduated from the University of Oregon in 2019. When she was a sophomore, Davis met with a campus minister from Grace City Church at the EMU to talk about her faith and sexuality, and was treated with judgment. (Marissa Willke/Emerald) 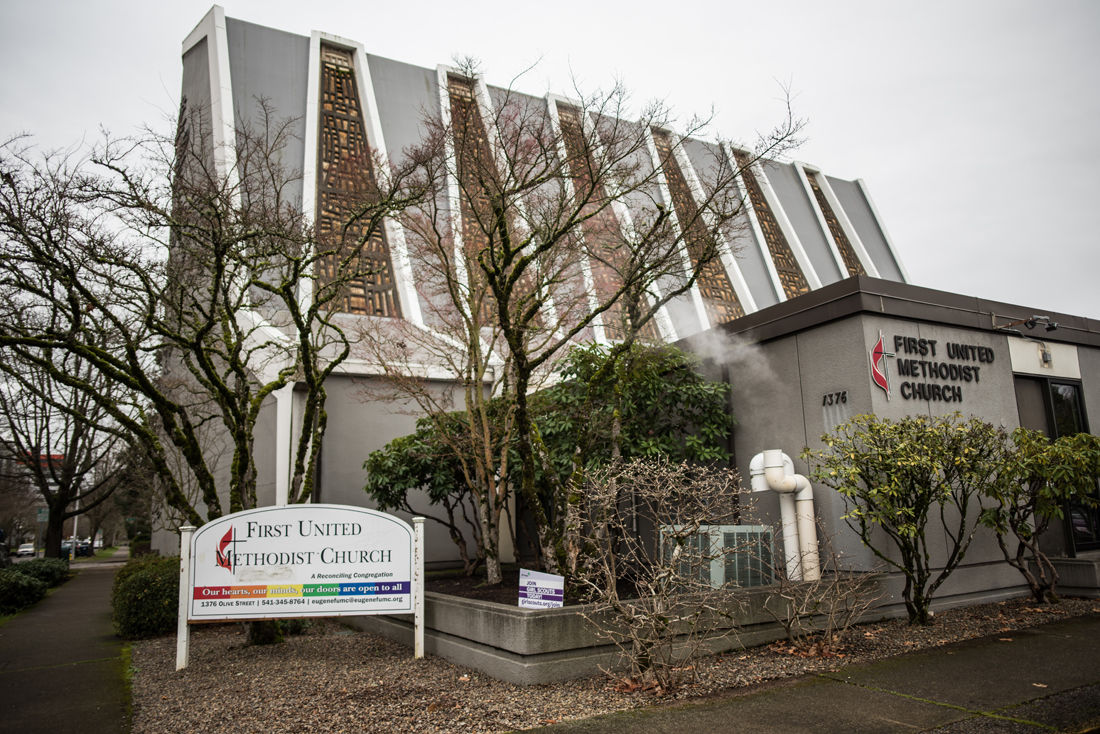 First United Methodist Church is one of several churches in Eugene, Ore. that is openly accepting of the LGBTQ+ community. (Marissa Willke/Emerald)

The first time she was ostracized for being queer, Kylie Davis was a sophomore at the University of Oregon. As Davis was beginning to acknowledge her identity as a queer person, she sought advice from a campus minister from a local church, whom she trusted. Rather than offering guidance, Davis said the minister peppered her with questions about her personal life, asking whether or not she had experienced sexual trauma in her childhood.

“She started asking these weird questions and I got very offended,” said Davis, who graduated from UO in 2019. “I told her ‘Are you psychoanalyzing me right now?’, and she just, like, stumbled over her words and I got up and left.”

After this experience, Davis said she felt unsafe going back to the church — and she isn’t the first one to experience this. LGBTQ+ Christians are often caught in situations in which they turn to churches for spiritual guidance but are instead met with questions about their sexual orientation, often leading to feelings of rejection and ostracization.

Now, the debate has come to a tipping point. Leaders within the United Methodist Church signed a proposal on Dec. 17 to split into more than one denomination in an effort to end decades of debate surrounding same-sex weddings and LGBTQ+ clergry members.

Since 1972, the church has maintained that“the practice of homosexuality is incompatible with Christian teaching” and that  “sexual relations are affirmed only within the covenant of monogamous, heterosexual marriage,” according to the official UMC website. Despite this stance, UMC still encourages LGBTQ+ Christians to participate in services; however, they won’t be able to join clergy or become pastors.

But not all Methodist churches agree with the official statements from the UMC. In 2016, dozens of United Methodist clergy came out as lesbian, gay or bisexual, in an act of definace towards the churche’s official stance on LGBTQ+ clergy; in Eugene, some churches are making the shift towards inclusion for their LGBTQ+ members, going out of their way to make gestures of support for the queer community.

Like Davis, Rose Nason also faced bigotry from church leaders she felt she could trust. Growing up in a church environment, Nason noticed that the Christian spaces she attended would tiptoe around the subject of homosexuality. During her time in a Christian youth group, she approached her youth pastor seeking answers to questions about her sexuality. The youth pastor told her plainly that she would “go to hell if [she] were gay.”

“It felt terrible at the time, but now I more so see it as a reflection of the members,” the UO sophomore said. “I don’t think Christianity is inherently bad, but a lot of people who practice it are hypocritical and twist their faith in order to suit their own desires and make themselves feel more powerful.”

But some churches in Eugene are opening their doors and minds to Christians and pastors of all sexual orientations. According to gaychurch.org’s Affirming Church Directory, there are 16 Christian churches in the Eugene-Springfield area that welcome queer people as part of their congregation. Three of them belong to the Reconciling Ministries Network, a coalition of Methodist churches nation-wide that advocate for the full inclusion of LGBTQ+ people into their congregations.

The network was created in 1984 in response to some feeling a need for “reconciliation” within the church for the exclusion of the queer community. In order to be a part of the network, churches are required to make an “affirming statement” in their ministry to demonstrate their acceptance of queer people in their congregation.

Trinity United Methodist Church in Eugene welcomed Rev. Daryl Blanksma to its congregation in 2017, shortly after joining the Reconciling Ministries Network in April of that year. Blanksma, an openly gay man, has been the pastor of the church for about two and a half years. In his time as a member of this church and previous churches he attended that were a part of the network, he has experienced acceptance from his various congregations.

“I certainly faced, before I was out, I faced a lot of folks who had strong feelings about this, and there are probably still folks in the church [that have these feelings]. They don’t really express that to me too much, now that I’m out,” Blanksma said. “And it may be because, again, because these congregations, since I have been out, are reconciling.”

The “strong feelings” Blanksma spoke of stem from verses within the Bible that condemn homosexuality, like those in chapters of Leviticus and in the writings of the Apostle Paul in Romans. These parts of the Bible have been used in the past to justify the ostracization of LGBTQ+ people in Christian spaces. However, people like Rev. Adam Briddell of Eugene’s First United Methodist Church say that these verses are “reflections of their context” in which they were written, and that the use of them against LGBTQ+ people is “Bible study malpractice.”

“It’s ludicrous to think Paul had any appreciation for gender identity and sexual orientation the way that we do today,” said Briddell. “We have learned so much about these areas just in the last 50 years.”

Other leaders of Christian spaces in Eugene share Briddell’s beliefs, too. Rachel Langford, pastor of Emmaus Lutheran Church, said that while the Bible is “the inspired word of God,” it was also “written by people” for “particular cultures”. For example, he says writings in Leviticus reflected the needs of the Israelites “in a particular context, in a particular time,'' that was dependent on the tribe’s ability to procreate.

“If you look at them as speaking to everyone and all time, yeah, well then you’re going to use them to say ‘okay well man shouldn’t lie with another man, or woman with another woman’,” said Langford. “But if you consider the cultural context, you see like ‘oh, this doesn’t actually rise above a cultural reality.”

It’s not only Methodists who are working to become more inclusive. Langford’s church belongs to an organization similar to the Reconciling Ministries Network, called ReconcilingWorks. The Lutheran organization has been an advocate for the “full inclusion” of the queer community in religious spaces since 1974. Emmaus Lutheran Church is one of three “Reconciling in Christ” communities in Eugene, and one out of 894 in North America. As a member of this organization, Emmaus Lutheran Church has recently taken steps to make their space more accessible to people of all gender identities by installing three new gender-neutral bathrooms in their church building.

While churches like Langford’s have shown they are willing to take steps toward inclusion in their own community, others feel there is more they can do to be proactive with their outreach. Rev. Jonathon Morgan, Senior Minister to the First United Congregational Church of Christ, wants to improve the connection his church has with the LGBTQ+ community in Eugene. While Morgan leads an “open and affirming” church that is inclusive of queer people, he acknowledges that simply advertising their inclusion on their website is not enough.

“Frankly, I think we could do a better job, in that, we could get the word out,” said Morgan. “Most people are assuming that if you are a Christian church, that you are not open and affirming to LGBTQ+ folk.”

Efforts made by Christian spaces to offer more inclusive environments do not go unnoticed by LGBTQ+ people. Davis, who now attends an LGBTQ+ inclusive Christian group on campus, appreciates being able to live out both of her identities as a queer and Christian person.

“It was weird in the beginning, because it’s like a whole new environment of people I never really knew existed, but know I have grown to really enjoy it and enjoy those people,” Davis said about her participation in Intervarsity Christian Fellowship.

For Christians like Davis, navigating the complexities of sexual orientation and gender identity in combination with faith and spirituality can be challenging. But in Eugene, there are communities that are willing to accept and guide them on their journeys.

Associate Opinion Editor for The Daily Emerald and University of Oregon student majoring in Psychology and Women's, Gender, and Sexuality Studies.