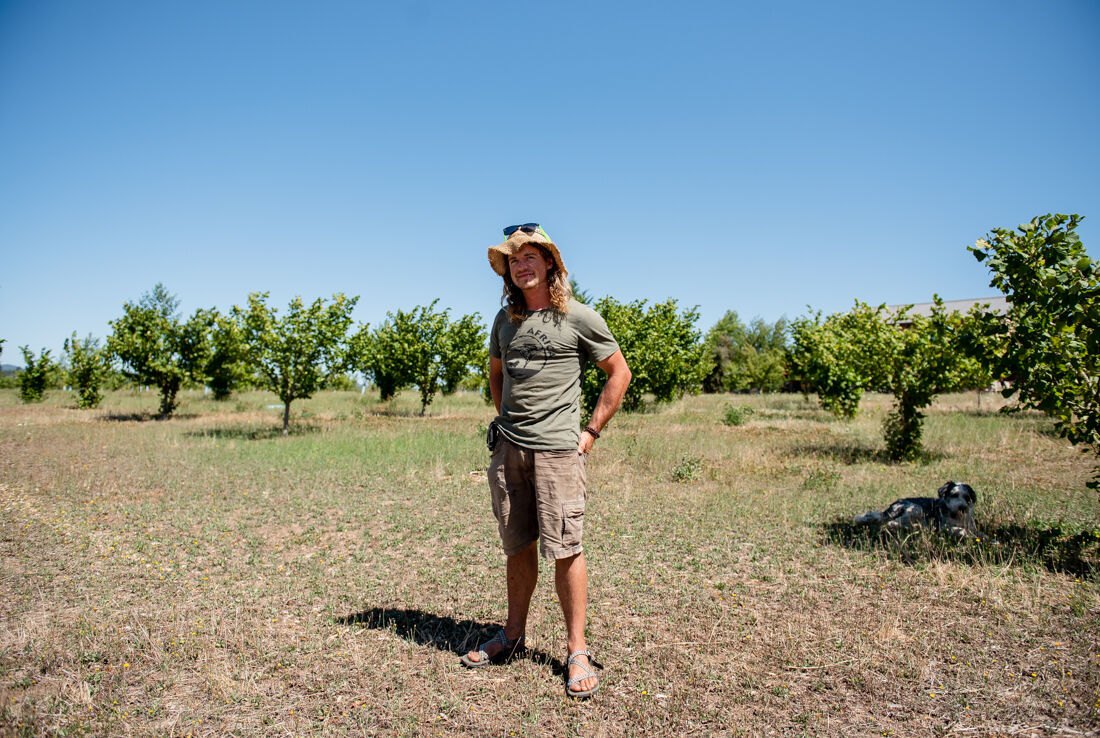 Ben Larson and his two brothers run My Brothers' Farm in the southern Willamette Valley. Oregon communities have had to adapt to the rising challenges the extreme drought has posed this summer. (Ian Enger/Emerald) 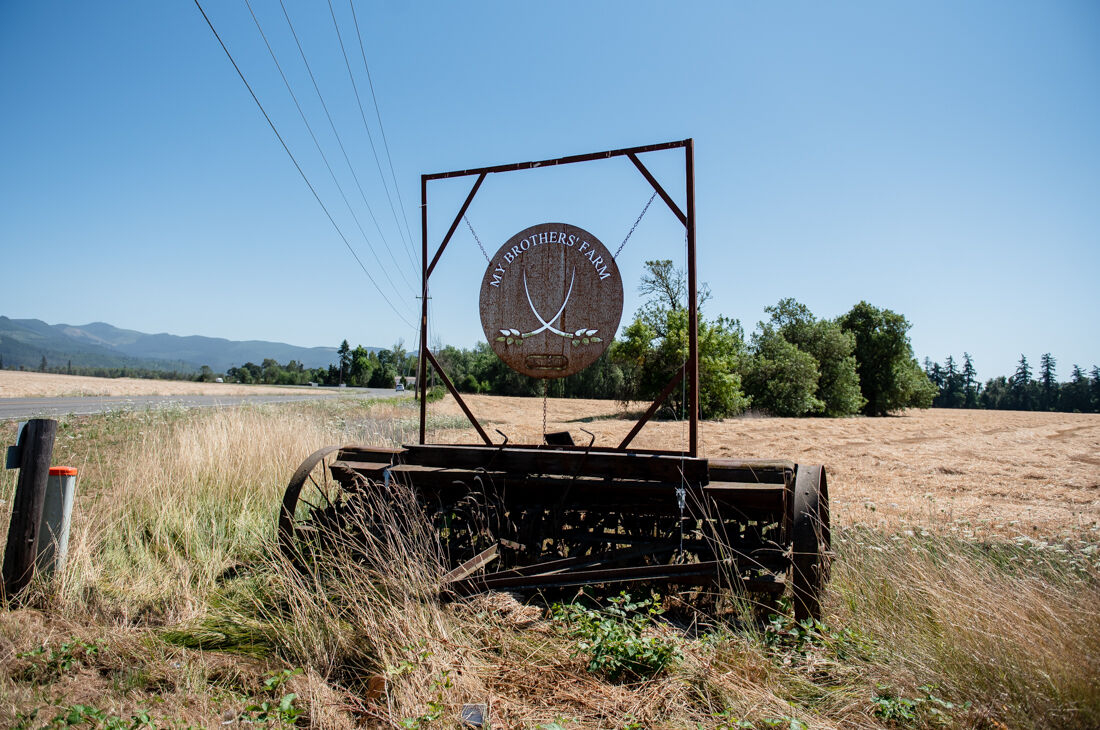 My Brothers' Farm is a 320-acre third-generation property, but a first generation farm. Oregon communities have had to adapt to the rising challenges the extreme drought has posed this summer. (Ian Enger/Emerald) 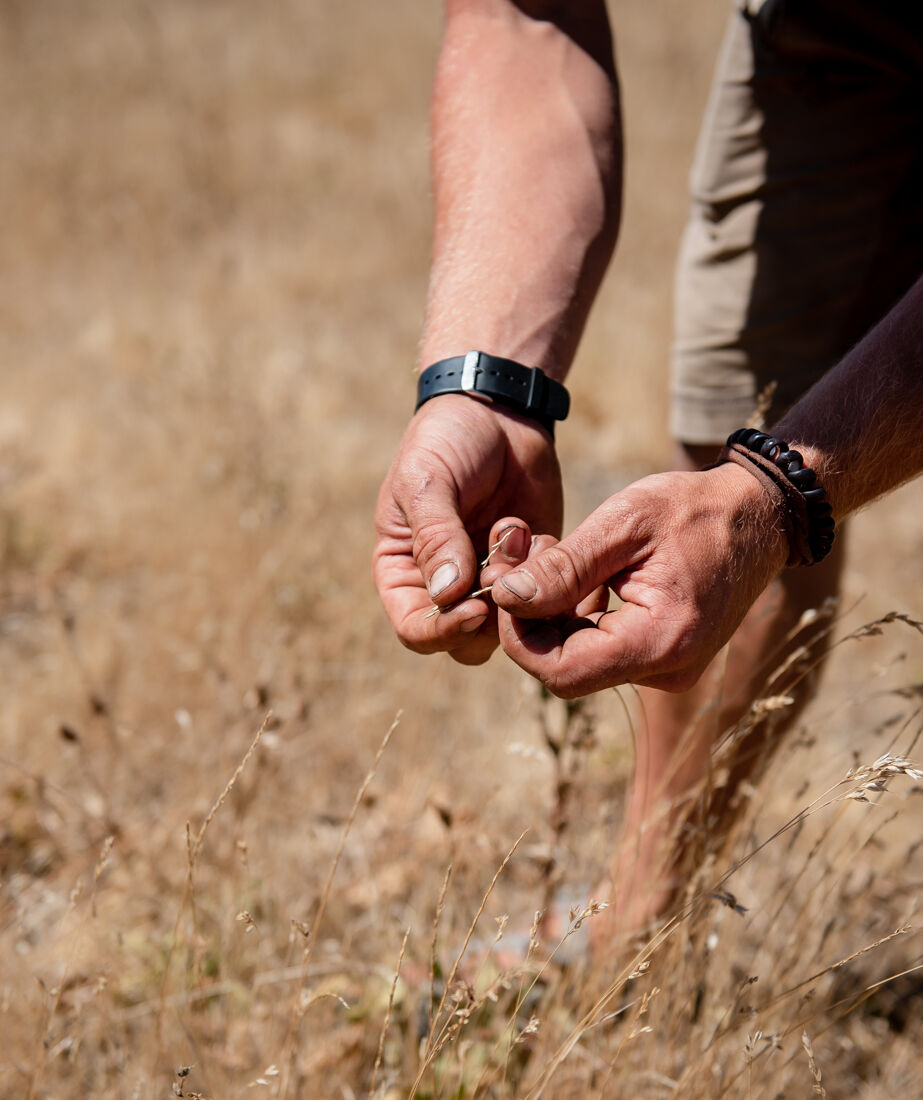 Larson picks apart a piece of dry ryegrass, a crop that has been greatly affected by the heat this summer. Oregon communities have had to adapt to the rising challenges the extreme drought has posed this summer. (Ian Enger/Emerald)

Ben Larson and his two brothers run My Brothers' Farm in the southern Willamette Valley. Oregon communities have had to adapt to the rising challenges the extreme drought has posed this summer. (Ian Enger/Emerald)

My Brothers' Farm is a 320-acre third-generation property, but a first generation farm. Oregon communities have had to adapt to the rising challenges the extreme drought has posed this summer. (Ian Enger/Emerald)

Larson picks apart a piece of dry ryegrass, a crop that has been greatly affected by the heat this summer. Oregon communities have had to adapt to the rising challenges the extreme drought has posed this summer. (Ian Enger/Emerald)

More than half of Oregon, including Lane County, is in extreme drought conditions, according to the US Drought Monitor. Nineteen of Oregon’s 36 counties have declared drought emergencies, according to a statement by Gov. Kate Brown on July 7.

“We were going to go out there and, once it got really hot, start our irrigation,” Ben Larson, manager at My Brothers’ Farm, said. “That’s when our pump broke.”

Larson and his two brothers run the 320-acre farm in the southern Willamette Valley. They planted a turnip crop to feed their hogs in the start of May, Larson said. Due to the drought, they had to start using their water pump earlier in the year than they usually would. However, the pump broke, and three weeks without rain followed.

Larson said most of the turnip crop dried out, so he and his brothers didn’t have as much to feed the pigs. It was the “biggest crop failure” from the drought, he said.

Larson said he and his brothers looked at water usage when determining what crops they planted. As a result, the farm is transitioning away from annual ryegrass — a common grass in the valley for a seed crop — because it now dries out earlier, Larson said.

An endangered species and cultural exchange

“They were just so plentiful that you could see them in the river jumping everywhere,” he said. “We haven’t been able to fish for them since 1986.”

That year, the Klamath Tribes shut down their own fishing season out of concern for the now endangered C’waam and Koptu fish populations. Declining water levels due to drought and the US Bureau of Recreation’s Klamath Project — which draws water from the lake for agricultural uses in other areas — put the fish at risk.

Now, the Klamath Tribes are limited to harvesting two fish a year for ceremonial purposes, according to their website.

Federally endangered and only found in Upper Klamath Lake, the fish face serious threats from the lake’s declining water levels, Gentry said. The water level of the lake impacts the habitat and spawning-abilities of the C’waam and Koptu.

In April, the Klamath Tribes sued the USBR for allegedly violating the Endangered Species Act by lowering water levels below what was needed for C’waam and Koptu to spawn, according to a press release. Although the judge ruled against the Klamath Tribes, the USBR announced that it would not take any water from the lake due to the drought in a May press release.

Gentry said he used to catch fish to share with his tribe’s elders. He said he would talk with elders as they ate together, discussing worldviews, the history of the tribe, family and their favorite fish. He said those conversations helped him find his purpose.

Gentry said he remembered a time when tribal members and non-tribal members alike would fish along the banks. “You could even slap them out of the water right there,” he said. “They were that plentiful.”

Now, children can only watch the fish in tanks during ceremonies, Gentry said.

“It’s heartbreaking to know that younger generations haven’t been able to catch and share those fish and eat them and experience that cultural exchange,” Gentry said.

Beyond the fish, Nesika Wilamut co-director and Klamath Tribes member Tana Atchley Culbertson said the drought impacts the availability of tribal communities' first foods, such as fish, berries and roots.

The search for resilience amidst environmental degradation

Running through the heart of Eugene, the Long Tom River Watershed includes Amazon Creek, Fern Ridge Reservoir and creeks originating in the Coast Range. The Long Tom flows to the Willamette River.

Besides providing drinking water for the city of Monroe, the watershed is home to a plethora of biodiversity, according to its website.

However, watershed executive director Clinton Begley said the drought depleted soil moisture, which means the  springs that feed many of the Long Tom River’s tributaries have less groundwater to draw from.

Begley said lower stream flows have led to higher concentrations of pollutants in the water from urban, industrial and residential spaces. Not only does this negatively affect aquatic species, he said, but the pollutants also make their way to the water treatment plant in Monroe.

The drought also impacts surrounding terrestrial environments as well by lowering soil moisture and drying out plants and trees, Begley said. After over a century without deliberate burns by Indigenous peoples, the dry plants combined with fire suppression create ideal conditions for fires, he said.

The watershed council is preparing for future droughts by considering which species might be better adapted to drier climates when it decides what to plant in the area, Begley said.

He said it’s also important for the watershed council to work with Indigenous tribes, so they can reconnect to the land and steward it in the way they did before.

BIPOC communities are disproportionately impacted by the heat that often accompanies drought because they make up a large portion of the outdoor workforce, Atchley Culbertson said. She said outdoor jobs include farming and construction work.

To combat those issues, the Oregon legislature passed SB 289 last month. The bill addresses the safety disparity in the outdoors amidst a rise in hate crimes in public spaces.