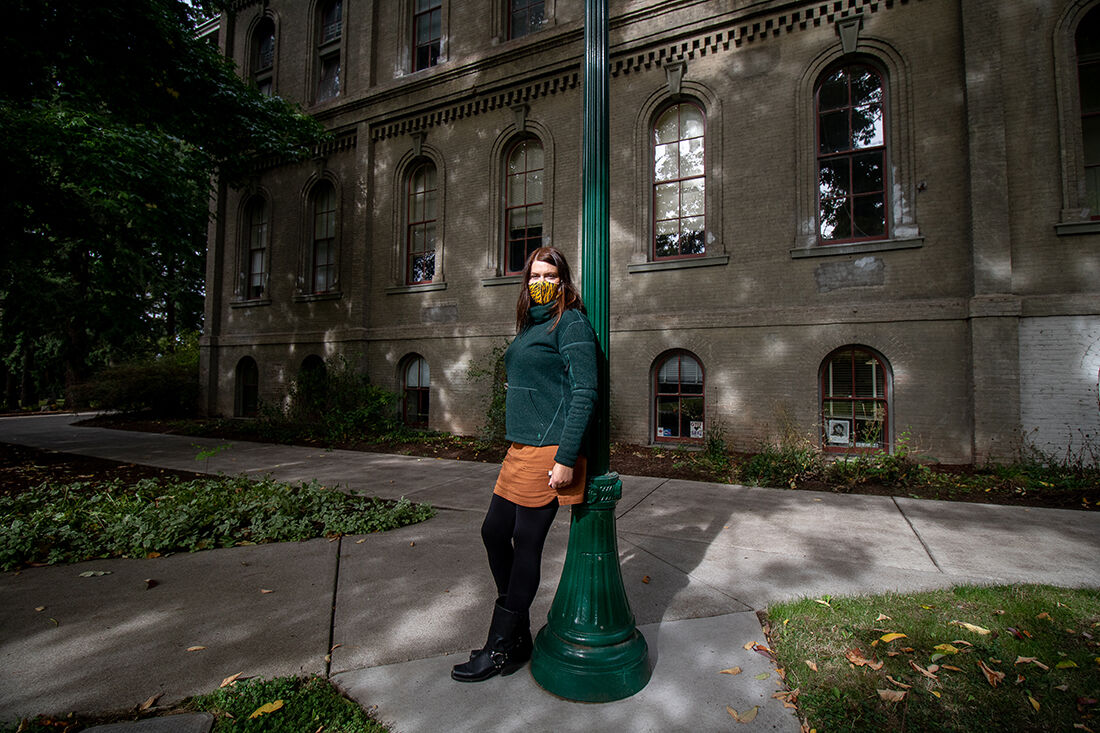 Liz Fairchild is the Vice President of External Relations for the Graduate Teaching Fellows Federation. During a press conference addressing the university's response to COVID-19, she said "We agree that in a pandemic safety is the responsibilities of employees and students. However, this is a shared responsibility with the University of Oregon, and especially the Board of Trustees. Further, we as employees cannot do our due diligence if the university doesn't put us in a position where we are empowered to take that responsibility." The Graduate Teaching Fellows Federation, or GTFF, is critical of the University of Oregon's response to the COVID-19 pandemic, and argues that the safety of both GE's and faculty has not been properly protected by the university. (Will Geschke/Emerald) 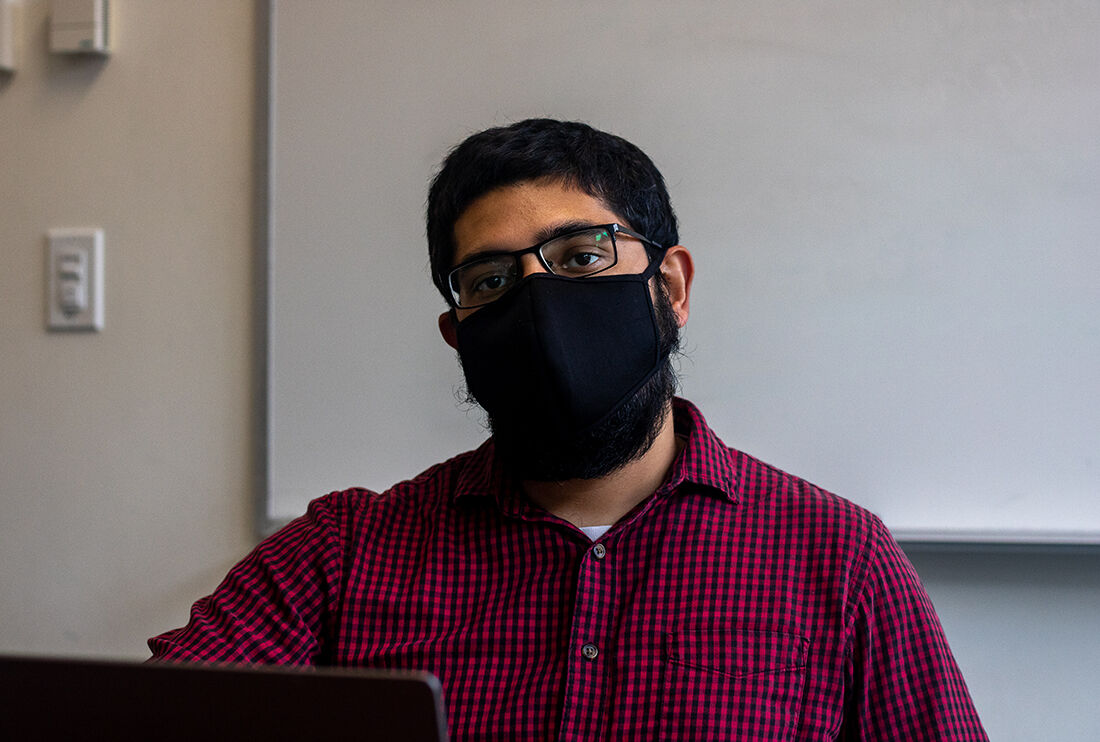 Rajeev Ravisankar is the president of the Graduate Teaching Fellows Federation. 16% of buildings in the University of Oregon have insufficient air circulation, and the solutions the university suggested were, to Ravisankar, inadequate. “You'd have to really rethink how classes are going to be set up, once we even get to that picture,” he said. “And opening windows as a solution is not going to cut it.” The Graduate Teaching Fellows Federation, or GTFF, is critical of the University of Oregon's response to the COVID-19 pandemic, and argues that the safety of both GE's and faculty has not been properly protected by the university. (Will Geschke/Emerald) 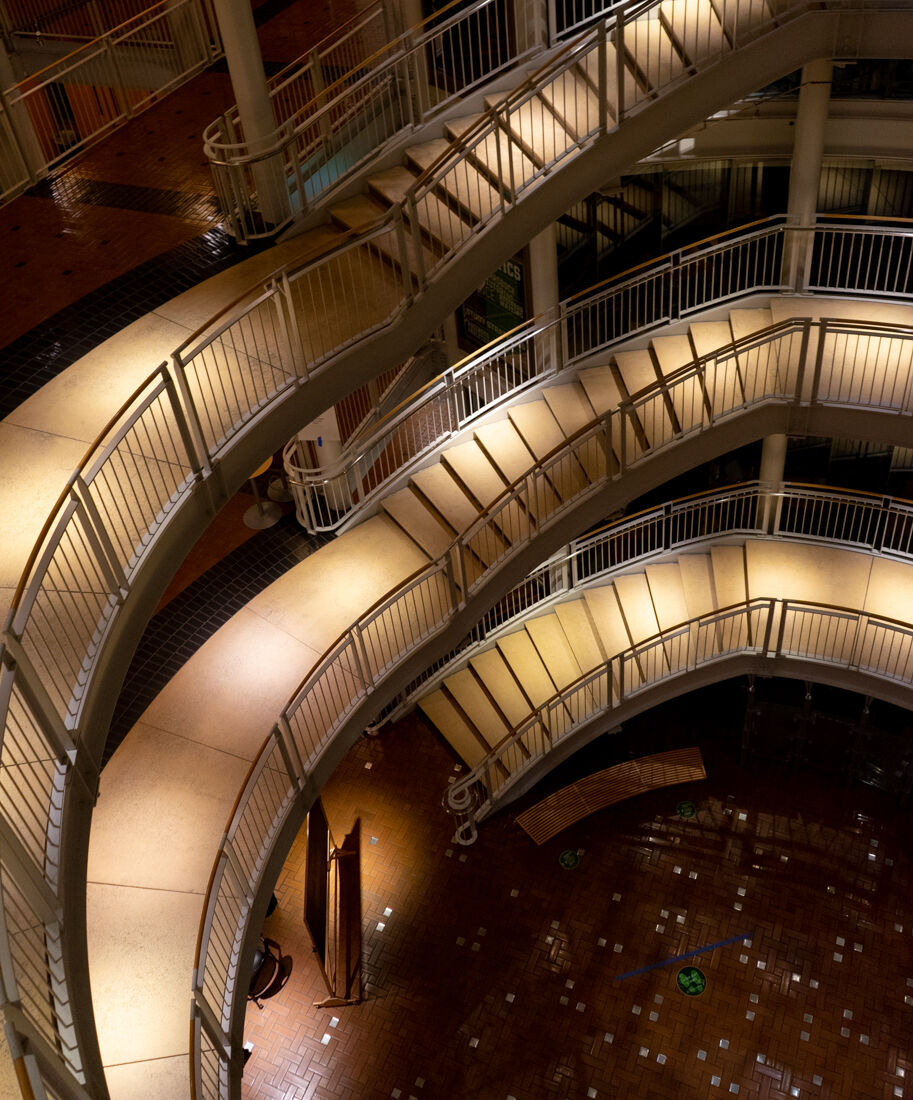 The Lillis Business complex, typically bustling with University of Oregon faculty, staff, and students, is almost entirely empty due to classes being held online. The Graduate Teaching Fellows Federation, or GTFF, is critical of the University of Oregon's response to the COVID-19 pandemic and argues that the safety of both GE's and faculty has not been properly protected by the university. (Summer Surgent-Gough/Emerald)

The Graduate Teaching Fellows Federation raised concerns that the University of Oregon administration is not doing enough to mitigate COVID-19 spread among staff, criticizing its current safety policies during an Oct. 14 press conference. Liz Fairchild, GTFF vice president of external relations, spoke on behalf of the GTFF.

“University of Oregon administration has failed to adequately meet the needs of not just graduate student employees, but also faculty and staff in regards to COVID-19 safety,” according to the statement read by Fairchild. UO’s policies and practices continued throughout the summer and now into fall term, disproportionately affecting research graduate students and staff, she said.

UO’s health and safety operational plan states that safety is a personal responsibility for students and staff. Fairchild said while the GTFF agrees with this statement, it believes the responsibility is also shared with the university and the board of trustees.

“We as employees cannot do our due diligence if the university doesn't put us in a position where we are empowered to take that responsibility,” Fairchild said.

Current university policy instructs employees to tell a supervisor if they test positive for the coronavirus, she said, but its operational plan does not provide additional guidance.

In the event of a positive case on campus, Missy Matella, UO’s senior director of employee and labor relations, said the administration will try to identify and inform close contacts, but there are limitations to what the university can do.

“We can't contact trace ourselves,” said Matella. “That's for Lane County Public Health to do.”

Fairchild said this lack of a robust contact tracing system makes it difficult for GEs to know if they have been exposed to the coronavirus and if they should quarantine, which puts “countless others at risk.”

Should an employee need to self-isolate, there are limited resources available and they are not communicated clearly, she said.

While UO’s testing capabilities have been primarily focused on residence halls and communal living on campus, Matella said the university is working on expanding those capabilities for employees.

With classes moving to a primarily remote structure, many GEs don’t have access to a reliable workspace, which is forcing them to combine their personal and professional lives. According to the statement, GEs are having to be available beyond their typical working hours and make difficult decisions, such as whether to pay internet bills instead of utility bills.

“The University of Oregon has refused to provide funding extensions for graduate students,” said Fairchild. “This means that many GEs must choose between either working in unsafe conditions to meet graduation requirements or find a way to pay astronomical academic costs ourselves in the middle of a global pandemic, or worse, forfeit our degrees.”

As per the current GTFF Collective Bargaining Agreement, the university is obligated to protect GEs from unsafe workplaces by providing a safe and healthy working environment. While UO currently has protocols to fulfill these obligations, GTFF President Rajeev Ravisankar said the follow-through on these protocols is “uneven.”

When ventilation may not be sufficient in such buildings, the university will turn to strategies such as physical distancing, face masks and attention to safe behavior, according to Director of Environmental Health and Safety Steve Stuckmeyer.

Ravisankar acknowledged the university’s efforts to put safety mechanisms in buildings but said the varying construction among campus buildings still leads to the concern of possible unhealthy work environments for GEs.

“It's not just about people not abiding by protocol,” Ravisankar said. “But it's about the university administration really not having a plan in place or a mechanism in place to do enforcement, to have more standardization across the units.”

Should the university move to a hybrid model, Ravisankar said he believes GEs will still find themselves in unsafe conditions despite the university’s current plans.

“You'd have to really rethink how classes are going to be set up once we even get to that picture,” he said. “And opening windows as a solution is not going to cut it.”

The GTFF, UO administration and other unions around campus are currently meeting every other week to try to address these issues. Matella said she hopes to continue the discussion and come up with a course of action; Fairchild echoed the sentiment.

“We just have to keep pushing them to make these changes and make these problems more accessible to the public so that they understand that they're not just speaking to the 1,400 some-odd GTFF members,” Fairchild said at the press conference. “But we're really advocating for the entire community.”

For the GTFF and other unions on campus, these workplace safety concerns are a product of larger, systemic issues within the university, according to the GTFF’s statement. Both Ravisankar and the statement made by the GTFF pointed to the lack of democracy and shared decision-making at UO.

“I think better decisions will get made if it's spread out in that way and that it is actually a model of shared governance at the university,” said Ravisankar. “As opposed to people who are making six-figure salaries, who, you know, are just really distant from the realities that a lot of us face.”

While the GTFF has been involved in UO’s Employee Safety Reopening Committee, according to Ravisankar, graduate employees and classified workers are not on the University Task Force on Long-term Responses to COVID-19, which advises UO president Michael Schill on financial responses to the pandemic.

Ravisankar said the university’s response to these student groups not being represented on the task force was that those groups won’t be involved in the decision-making process. He said decisions like these give the illusion that unions and employees are involved when in reality they aren’t; it’s just top university officials calling the shots.

This is unacceptable to Ravisankar. He said that since GEs and other campus employees will be feeling the effects of these financial challenges, they should know what they’re dealing with to figure out solutions.

“[That] reveals the problem, the wider problem that exists, I think, very sharply,” said Ravisankar, “and I think really calls for something very different, especially during such an extraordinary time.”