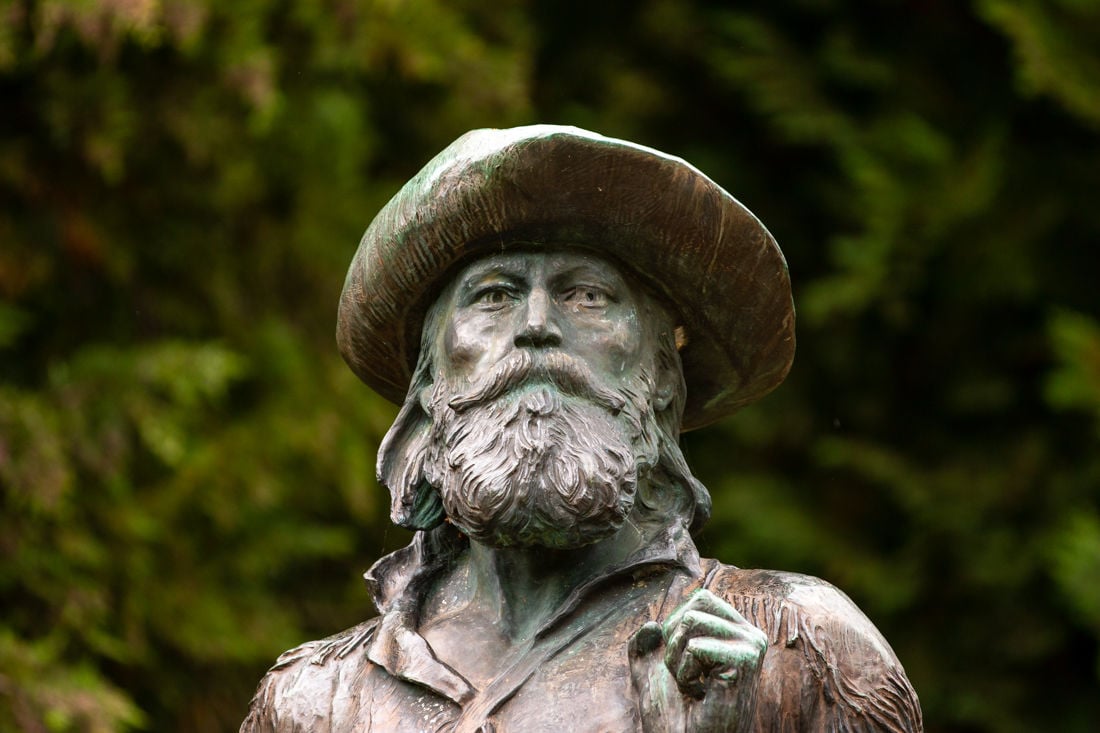 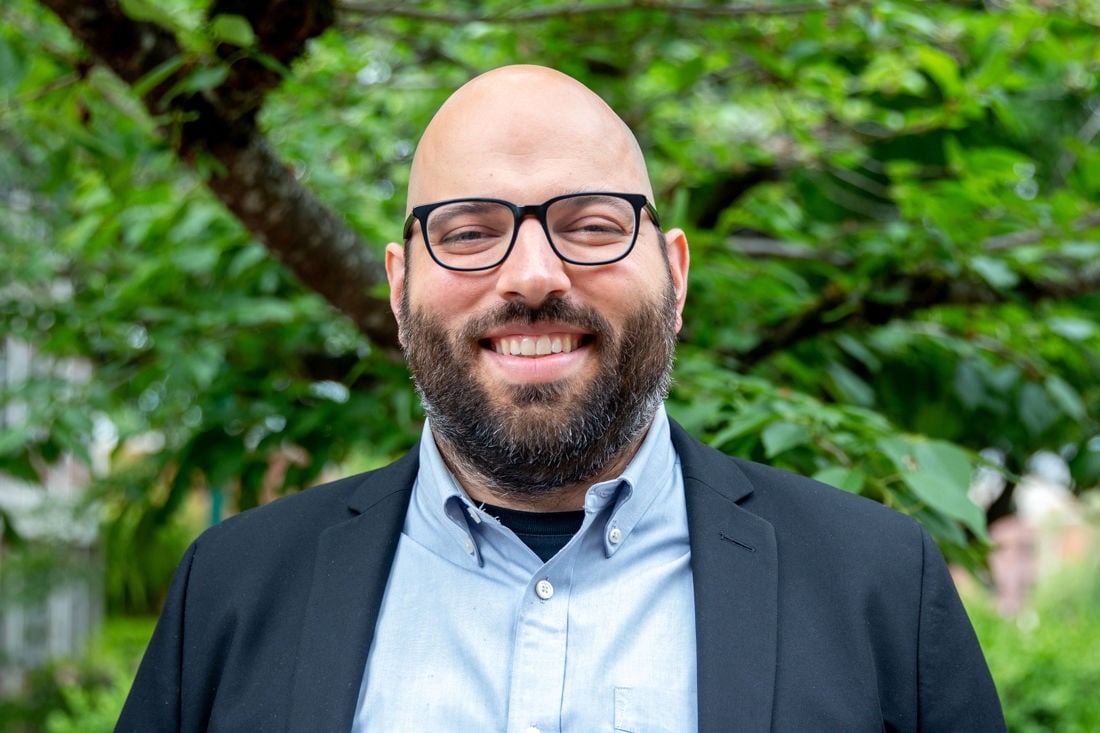 UO History Ph.D candidate Marc Carpenter has recently conducted research centered around the controversy of the Pioneer Statue on the University of Oregon campus. (Maddie Knight/Emerald) 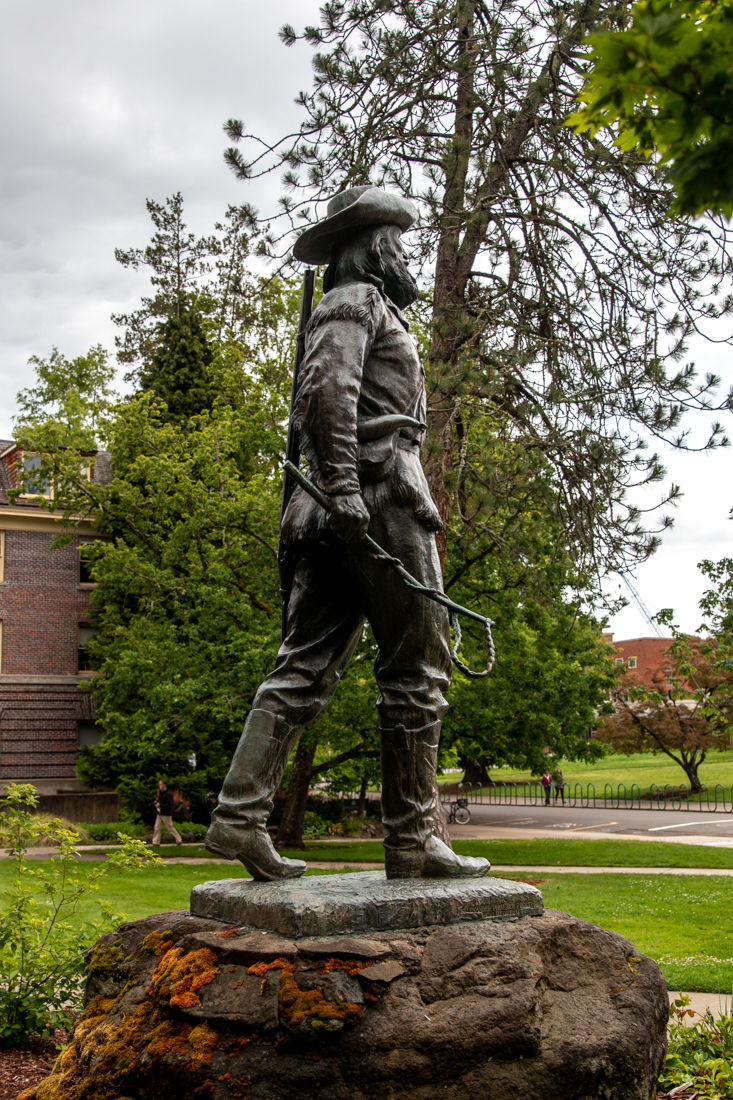 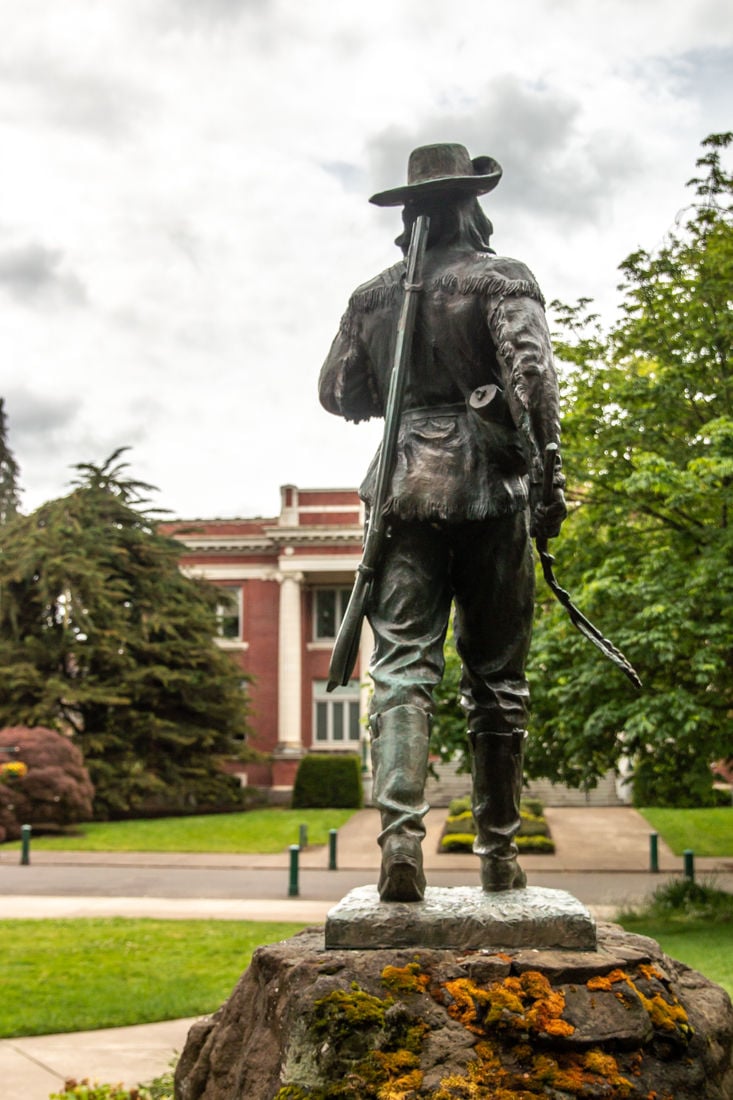 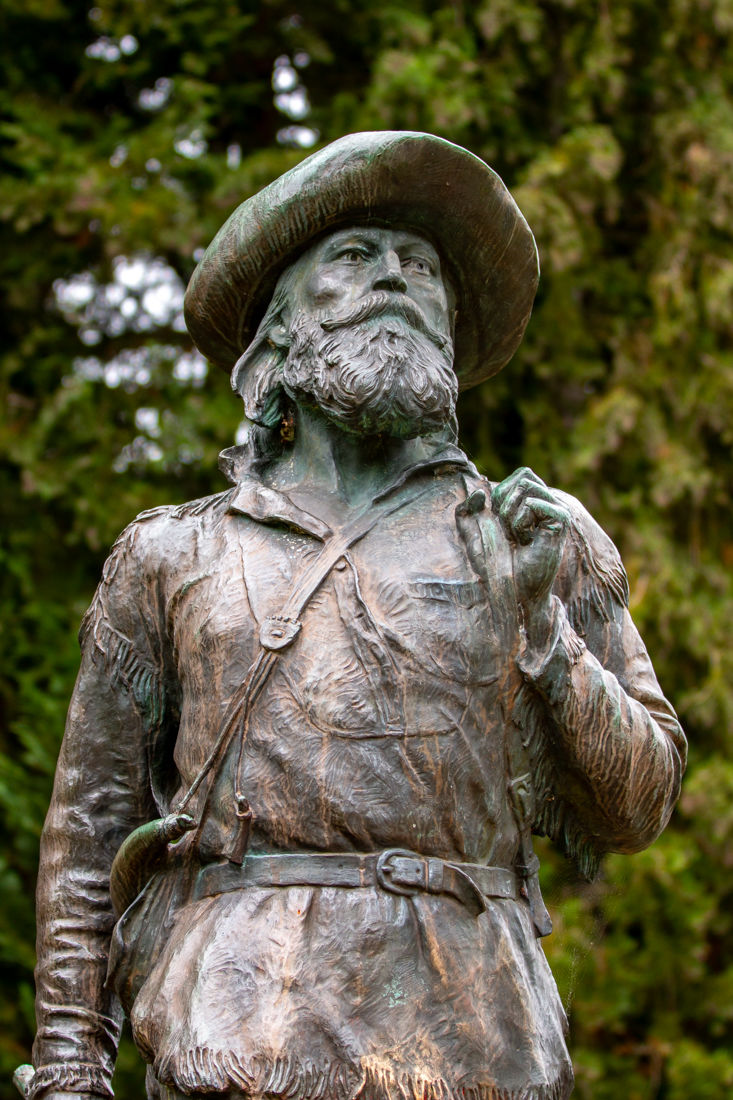 Every day, thousands of University of Oregon students pass the Pioneer statue on their way to class.

The pioneer stands among the students between Fenton and Friendly halls, carrying a whip in one hand and a rifle slung over its shoulder.

As the statue’s 100-year anniversary approaches, the history surrounding the statue has sparked conversations — and a possible protest — on campus and in the community.

The statue was vandalized last month with red paint sprayed onto its crotch and whip in its right hand and googly eyes were placed over the statue’s eyes. Following this vandalism, members of the community reached out to the Emerald with information about its history and a rumoured protest. Members of the Native American Student Union and the UO history department said a protest was in the works but could not offer any other information at this time.

Ryan Reed, a member of NASU, said the statue has made him uncomfortable since his first weeks on campus.

Concurrently, there is a committee on campus, tasked by UO President Michael Schill, that is working to make recommendations to balance the representation of history on campus to include people of diverse backgrounds.

Reed said the Pioneer statue might not bother every student at UO, but it negatively impacts the way Native students feel on campus.

“It’s like a murderer being praised for what they did. I guarantee that if you got [Ted] Bundy’s statue up on campus, people are going to go hectic,” Reed said. “But they don’t think of that with the pioneer statue. It’s been so romanticized and white-washed that a pioneer is a thing that is supposed to be positive.”

UO professors O’Neal and Hatfield developed the “Untold Stories” project in 2013 within a Freshman Interest Group to create the Hidden History website that highlights the untold histories of traditionally underrepresented groups on campus.

According to the Hidden History entry on the Pioneer statue, in the early 20th century, pioneers were depicted in statues across the country to “valorize” their achievements.

On the day of the statue’s instillation, May 22, 1919, the president of the Oregon Historical Society gave a speech to dedicate the statue that praised the Anglo-Saxon race and its ability to assimilate other races and cultures to become a part of it, according to the Hidden History website.

“Many of the words that were used at that speech, at the dedication, [are] very problematic,” O’Neal said. “You see the statue on campus, but there’s no interpretive information there. We wanted to provide [the Hidden Histories] page so that there’s more background.”

O’Neal said information on this topic is relatively hard to find because it’s typically found in primary sources like letters and news articles. Making this information accessible to students and community members was one of the driving forces behind the creation of the Hidden Histories website, O’Neal said.

Carpenter received a grant from the Oregon Heritage Foundation last December to look into the statue’s history. He went through thousands of pages of archival material — some of which had never been used in historical research before.

“The goal of my research is to get a well researched basis to start having this conversation,” Carpenter said. “The end message has ended up being, based on what I’ve found, that when Native students today look at that statue and see violent colonialism, they are seeing what was intended.”

Carpenter presented his findings at a pub talk last week at the Hop Valley Brewing Company to a group of 50 students, faculty and members of the community.

“I think students should care about what their university represents. I think the vast majority of the University of Oregon students would rather not have a statue celebrating white supremacist nationalist violence,” Carpenter said. “I think part of the college education is learning how to be good citizens and good people, and this can be part of that.”

After diving into the biographies of the man who created the statue and the man who commissioned it, Carpenter said he discovered noticeable themes of white nationalism tied to the statue.

The sculptor Alexander Phimister Proctor created several other monuments during this time period, including a statue of Robert E. Lee that was removed from its pedestal in 2017 because of its white supremacist ties, according to Dallas Morning News.

The man who commissioned the pioneer statue, a Portland attorney named Joseph Nathan Teal, paid $10,000 to have the statue built — equivalent to $300,000 today. Teal was tied to other problematic statues in Oregon, such as the Coming of the White Man in Portland, Carpenter said.

“A monument is a celebration. Monuments innately celebrate that which they depict. So, to me, it feels very similar to the confederate monuments that speckled a large part of the rest of the country,” Carpenter said. “It’s a monument to violence and white supremacy, and I don’t think those are values that we want to have as a community.”

Committee on Understanding our Diverse Histories

Last year, a resolution passed through the university senate that created a task force to address controversial monuments and artwork on campus and recommend new monuments that recognize people of diverse backgrounds with contributions to campus: the committee on recognizing our diverse histories.

Adriene Lim, the dean of libraries and co-chair of the committee, said the president tasked the committee with examining campus and giving recommendations on how to balance our representation of history.

“In our society, broadly, there are some voices and some histories that have not been represented well,” Lim said. “They’re either missing from the narrative or they are disregarded in the narrative. So, we are doing that work.”

The committee is creating an inventory of controversial monuments on campus, such as the Pioneer statue, as well as recommendations for new monuments to celebrate underrepresented history. They will send in these recommendations to President Schill sometime before the end of fall term in 2019.

Hannah is the senior news editor for the Daily Emerald. She used to cover the university senate and construction on campus. Send news tips to hkanik@dailyemerald.com