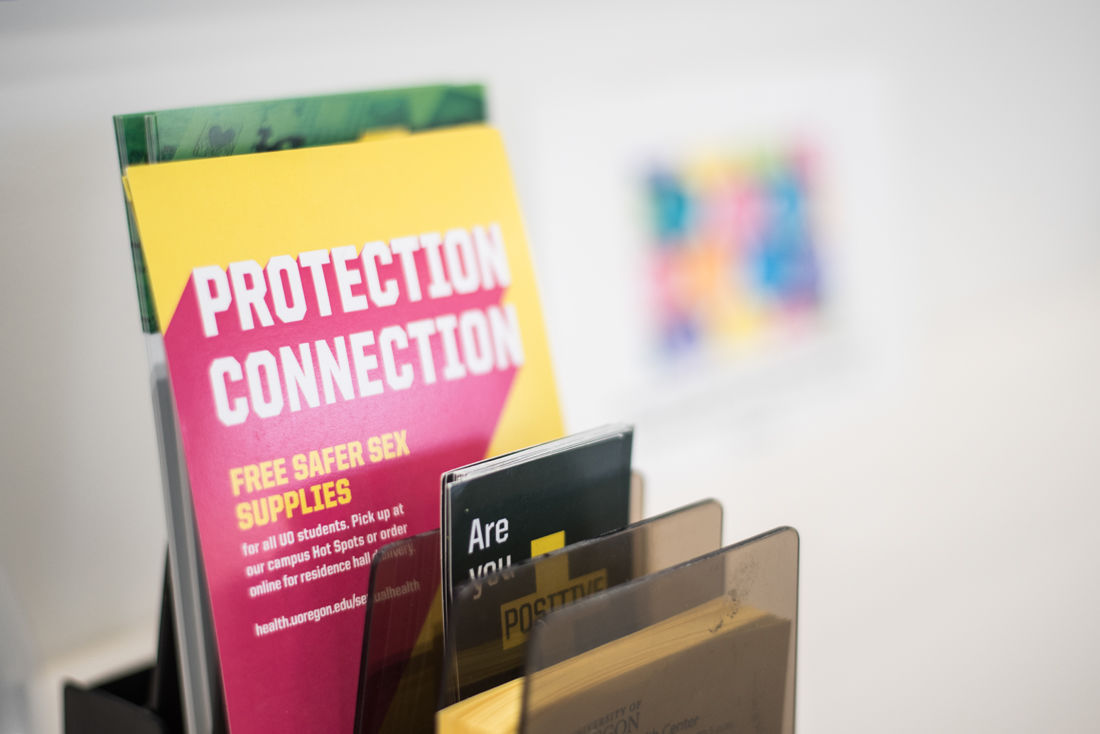 Flyers with information about the Protection Connection program are available in the Health Center. (Marissa Willke/Emerald) 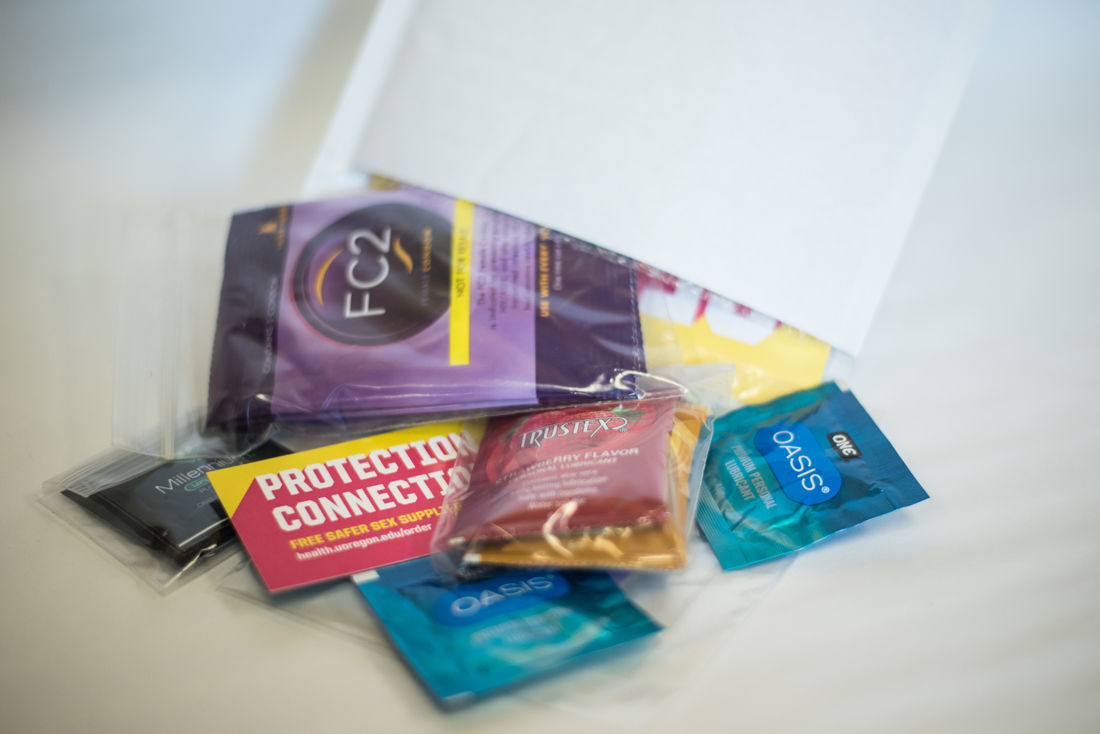 The packages supplied by Protection Connection are discreet to maintain privacy. (Marissa Willke/Emerald)

Kaleigh Jodice walks around campus carrying hundreds of condoms and other contraceptive methods on a familiar route she takes every day. As part of the University of Oregon senior’s role as a health promotion project aid within the Health Promotion department at the university’s Health Center, she’s restocking safe sex hot spots on campus.

The hot spots are a part of the Health Center’s new program called Protection Connection, a program that helps students “get the sexual health supplies they need to make sex safer and more enjoyable at the same time,” according to its website, At these hot spots are condom dispensers and other forms of contraception.

The youth population (ages 15-24) make up only a quarter of the sexually active population, but make up for half of the 20 million new cases of sexually transmitted diseases that occur in the U.S. every year, according to the Centers for Disease Control and Prevention. Clegg-Thorp said 1 in 2 people by age 25 will have experienced an STI, which translates to 1 in 4 in the traditional college age range.

“It’s a huge issue that’s facing our students,” she said, and mentioned that college students are at higher risks of getting STIs for behavioral, cultural and some biological reasons. She said they often have multiple sexual partners and lack the necessary emphasis on preventative measures such as STI testing and contraceptive usage.

Jodice also speaks from her own experience about stigma on campus surrounding contraceptive use. She said, “pulling out a safer sex supply when you’re hooking up with someone is maybe going to be seen as weird, or like you’re being too cautious.”

Condoms and other contraceptive methods can be up to 99% effective against STDs. A CDC report on STDs among young adults released Oct. 8 attributed growing STD rates to a few barriers to access within adolescent populations: embarrassment, inability to pay, lack of transportation and a mismatch of clinic hours with youth schedules. These are the kinds of barriers that the Protection Connection program wants to alleviate on UO campus.

Jodice’s boss, Health Promotion Specialist Cate Clegg-Thorp, said the students are the ones who do most of the work for the program. They fill orders, stock hot spots, and host outreach events related to sexual health and awareness, Jodice said.

The hotspot locations on campus are located at:

In addition to the hot spots, students who live in the residence halls can order contraceptives online to be delivered to their dorm.These include oral dams, internal and external condoms, and Love Gloves. They even offer size and material options within the range of products.

After filling out the order form, the supplies are delivered in discreet packaging for free to residence halls twice a week by student workers on foot such as Jodice. The packages go to service center desks, the same way any other delivery would be. Jodice and her team encourage students who don’t live in the residence halls to take advantage of the hot spots.

Clegg-Thorp said the program has been so far successful. Since the programs start in February this year, she said it has increased its distribution by 67%. She said they have put out 55,000 external condoms. Jodice said Trojan condoms seem to be the most popular, and the hot spots are empty almost every day when she goes to restock.

Making successful programs like this come to fruition is not an easy task. Jodice said they rely heavily on their volunteer program. They have what she called “packing parties” where volunteers can help pack the boxes to be sent out to students.

Protection Connection is also hosting an event on Friday, Oct. 26 on the EMU Terrace from 11 a.m. to 2 p.m. The event, called Healthy Relationships Between the Sheets, is part of the university’s Healthy Campus week; students will write on a big sheet how they define a healthy relationship, and there will be plenty of contraception for all.