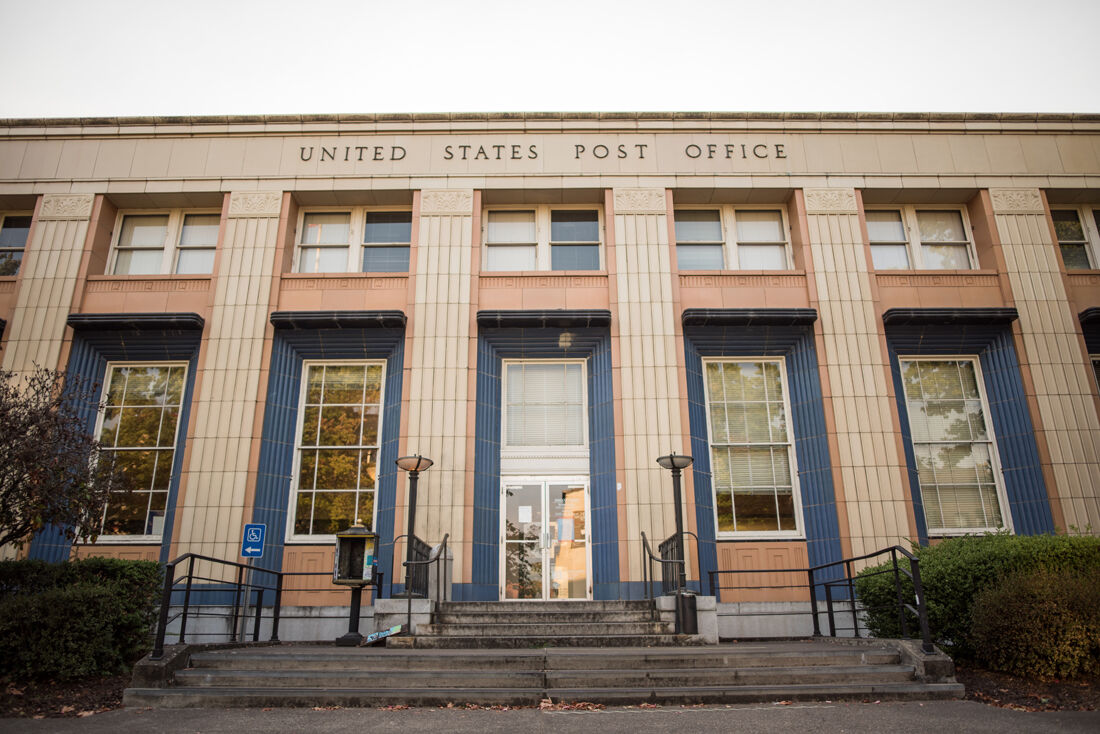 The United States Postal Service has recently undergone cuts from the Trump administration to ban overtime and shut down mail sorting machines — both of which have caused delays in mail delivery. (Marissa Willke/Emerald) 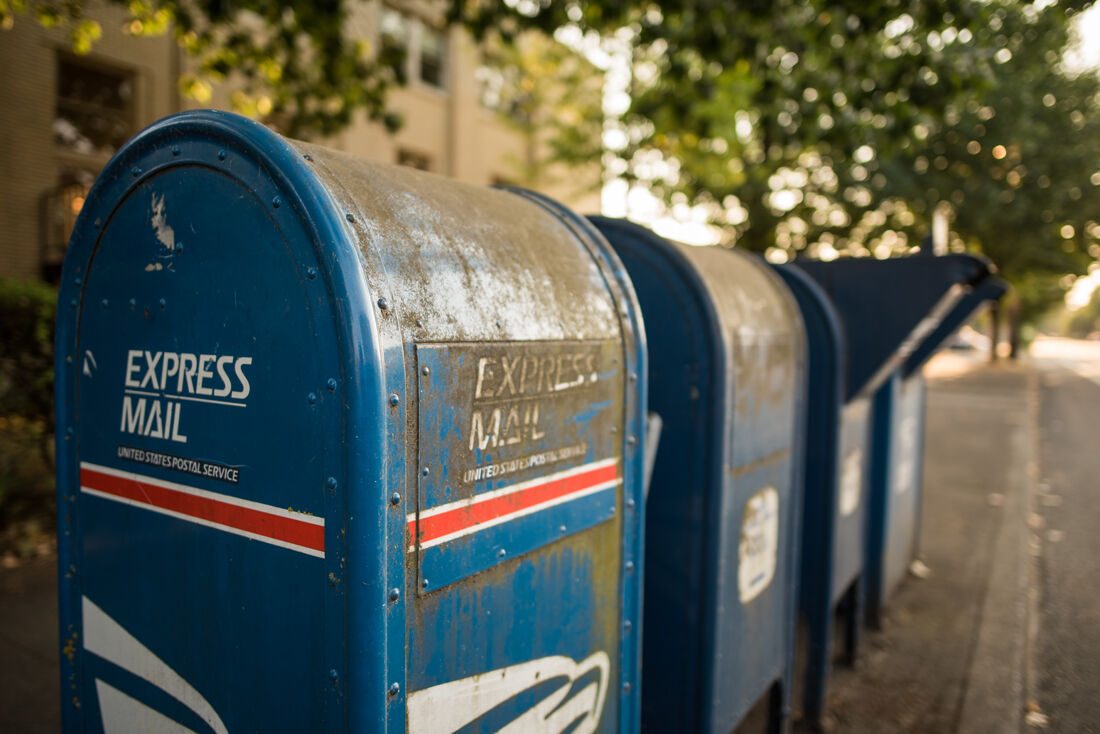 With COVID-19 forcing people to stay home, the USPS is especially crucial this year for things such as medication, paychecks, and ballots. (Marissa Willke/Emerald)

The United States Postal Service has recently undergone cuts from the Trump administration to ban overtime and shut down mail sorting machines — both of which have caused delays in mail delivery. (Marissa Willke/Emerald)

With COVID-19 forcing people to stay home, the USPS is especially crucial this year for things such as medication, paychecks, and ballots. (Marissa Willke/Emerald)

As election coverage ratchets up to a fever pitch, controversy surrounding the United States Postal Service has exploded across headlines in recent months. With COVID-19 forcing thousands to stay home, the mail service has served a crucial role in providing residents with not only mail, but also ballots and medication. This is all the more true in the Eugene community, where public officials have been fighting to increase the funding for the postal service for years.

Cuts to the postal service began quickly after President Trump appointed Louis DeJoy as the United States Postmaster General in June. After widespread public condemnation over these cuts affecting the November election, DeJoy said he would suspend further money saving measures until after the election. Despite this, he has not reversed cuts that have greatly affected the efficiency of the service – such as banning overtime.

According to Caitlin Cusimano, the President of Eugene’s Postal Workers Union, banning overtime, which makes up about 10-15% of postal service work hours, has led to mail piling up at mail processing plants.

“If you are leaving and your mail isn't ready, or some of your mail isn't ready, you're gonna leave it behind,” said Cusimano. “In terms of local impact, mail is being delayed to customers that includes critical medications and medical supplies, financial transactions like paychecks, bills, social security checks, national mailings like census, taxes, coronavirus stimulus checks, vital supplies and ballots may or may not be affected.”

Along with cutting overtime, DeJoy ordered post offices to shut down mail sorting machines – adding further to pileups. According to Cusimano, turning machines off likely won’t save the postal service money, which is one of the main driving forces behind DeJoy’s cuts.

These cuts come amid the Trump administration’s calls to privatize the service due to their shaky financial situation and increasing fiscal losses. According to a November 2019 financial report by the USPS, the net loss of the service was $8.8 billion, an increase by $4.9 billion compared to 2018.

These losses are only likely to increase in the coming years. According to Cusimano, the USPS has experienced a 30% drop in mail volume and there is a projected $50 billion loss over the next 10 years because of COVID-19.

In 2018, the Trump administration released their reorganization plans and goals for every government agency, from the Department of Education to the Department of Energy. On page 68, the administration outlines their goals to privatize the postal service – inspired by privatized mail carriers in many European countries. Citing high operating costs and costly federal benefit programs, they claimed a privatized service would increase efficiency and flexibility.

Much of the financial difficulty of the USPS stems from one such federal benefit program called the “Postal Accountability and Enhancement Act,” which requires the postal service to pre-fund retiree health benefits far into the future.

“It’s wild,” said Cusimano. “So, in concept you've got people that haven't even been born yet, that might someday work for the Postal Service, whose retirements are being paid for now. So that's why we look like we're in the red.”

According to the 2018 plan, “USPS is caught between a mandate to operate like a business but with the expenses and political oversight of a public agency.”

“We're under this manufactured feeling of having no money all the time,” Cusimano said.

“USPS doesn't receive taxpayer money,” Cusimano said. “We run solely off revenue from postage and postal services. So a large part of that is revenue from companies and retailers who now aren't advertising on account of the pandemic.”

For Cusimano, she doesn’t see any reason aside from politics to cut USPS funding. “We're not a business,” she said. “We're a service. We're more akin to the DMV than we are to a corporation.”

Treating the postal service like a profit-losing private business and cutting funding undermines its reputation, she said, and threatens their continued existence as a public service.

In July, Representative Peter DeFazio of Oregon, along with representative Alma Adams of North Carolina penned a letter to DeJoy calling for the return of overtime.

“We fail to understand how leaving mail in the facility will somehow achieve better efficiencies,” they wrote. “We are already hearing reports in our districts of several palettes of parcels being left at facilities as letter carriers are forced to leave prematurely for their delivery routes.”

In August, Tristan Waits, a rising senior at the University of Oregon and president of the College Democrats, spoke at a press tour with senators Ron Wyden and Jeff Merkley, along with Rep. DeFazio, about the importance of the USPS in Eugene.

Waits spoke about how cutting funding hurts rural communities, who rely on the postal service to deliver mail to areas that private companies would not find profitable, and for students – especially out of state students who rely on the USPS to deliver their ballots back to their home states.

During an interview after the event, Waits explained that his grandfather is a farmer who lives in Yamhill. Without the postal service, he would need to travel to some place like Portland and wait in a long line at a polling station to vote – potentially bringing COVID-19 back to rural communities.

“It’s such a bleak and disheartening situation,” Waits said.

Despite fears over completed cuts affecting the election, Cusimano remains confident in the ability of the postal service to handle ballots in November.

“In terms of local impact here on voting, I'm not super concerned," she said. "But people should still be voting early.”

Nick is a news reporter for the Daily Emerald. Send him story ideas at nrosenberger@dailyemerald.com.