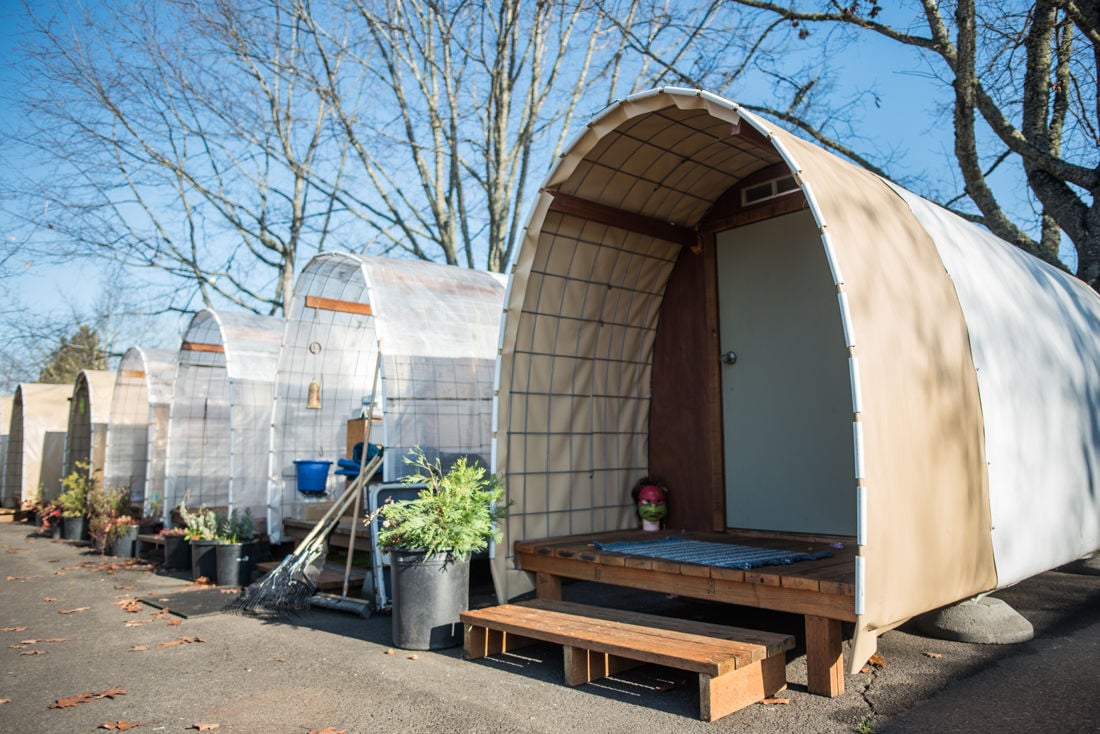 Many of the residents customize the Conestoga huts with plants, hanging decorations and other personal belongings. The Conestoga huts, run by Nightingale Hosted Shelters and located in a parking lot at Good Samaritan Society, provide a temporary “rest stop” for individuals to live. (Marissa Willke/Emerald) 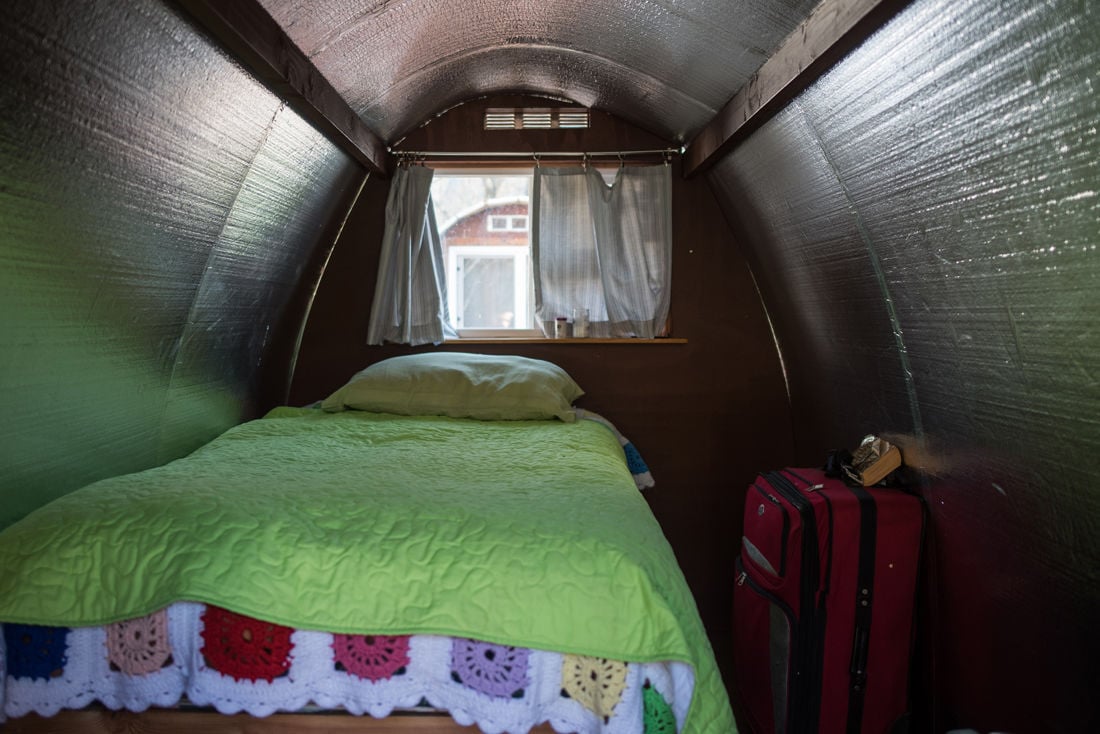 Each small room is furnished with a fully made bed. The Conestoga huts, run by Nightingale Hosted Shelters and located in a parking lot at Good Samaritan Society, provide a temporary “rest stop” for individuals to live. (Marissa Willke/Emerald) 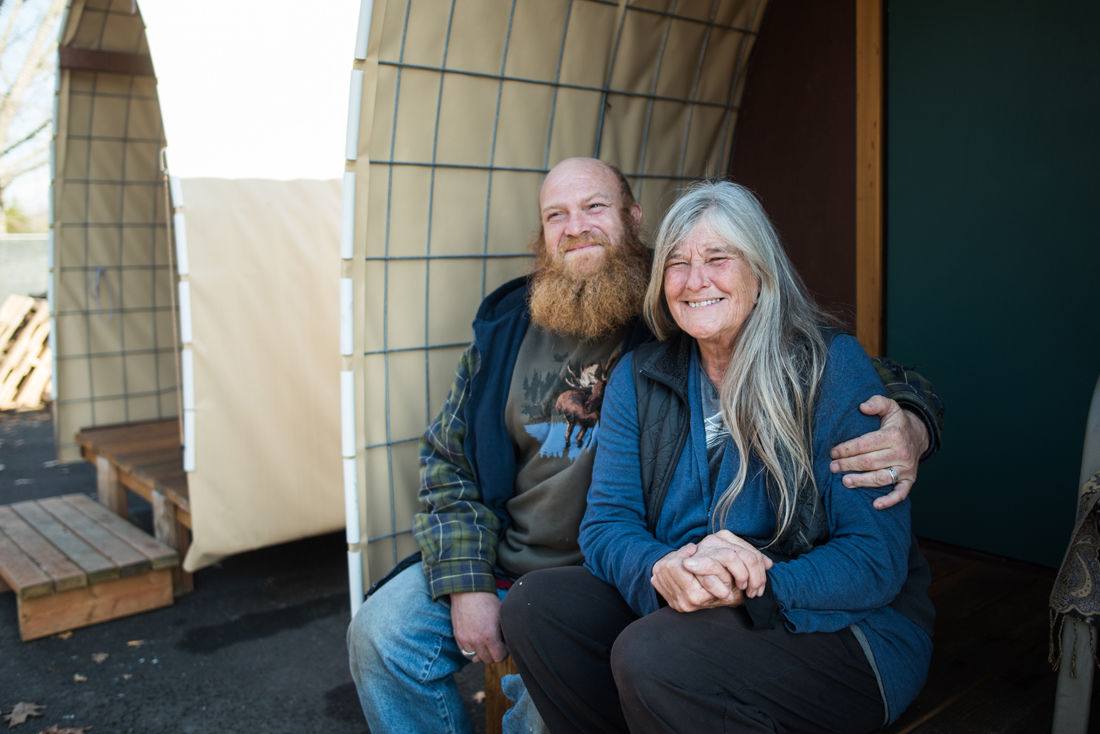 Nathan Showers and Tracy Joscelyn, the camp managers at the Conestoga huts, sit on the front porch of one of the structures. The Conestoga huts, run by Nightingale Hosted Shelters and located in a parking lot at Good Samaritan Society, provide a temporary “rest stop” for individuals to live. (Marissa Willke/Emerald) 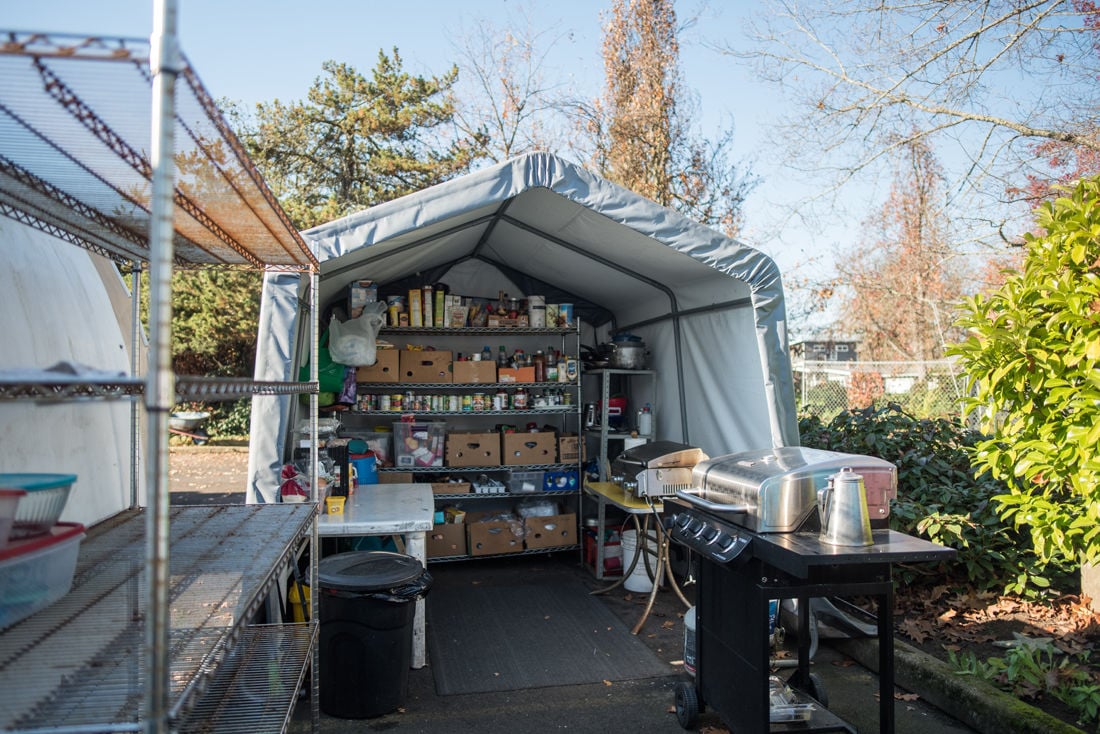 A central kitchen and storage space allows residents to cook and store food. The Conestoga huts, run by Nightingale Hosted Shelters and located in a parking lot at Good Samaritan Society, provide a temporary “rest stop” for individuals to live. (Marissa Willke/Emerald)

Nightingale Hosted Shelters has spent the past five years building homeless camps in Eugene, and 147 of its residents have gone on to find permanent housing. It looks to continue that trend as it prepares to build the 20th — and final — hut at its 34th and Hilyard Street rest stop.

According to its application for future residents, Nightingale’s “mission is to provide temporary shelter and a healthy supportive community for people who are unhoused.” Its website defines rest stops as locations where the Eugene City Council works with nonprofits to allow “up to 20 people” to stay in tents or Conestoga huts.

Their structure is intended to alleviate potential fears or risks that may come with being homeless and to offer a temporary but comfortable living space.

“It’s supposed to be a rest stop on the way to better housing,” said Nightingale board member Vickie Nelson. “This is a place where they can, first of all, feel safe — know they can sleep through the night, know their property is safe.”

Nightingale and CSS have discussed possibly merging in the future, but Nelson said there are “no firm plans yet.” The two non profits both provide shelter for homeless people and have been collaborating since 2014, with CSS volunteers like Schmidt helping build the most recent set of huts.

Schmidt, while praising the huts’ innovative structure, does not consider them affordable housing, but instead as a step on the path to long term, better quality housing.

“I would prefer the Conestoga huts be used to give people a leg up,” he said. “Live here for six months free of charge, no rent. Save some money, get yourself into an apartment, get yourself into a rental home, rent a room somewhere — use this as a boost. I don't want to see people in a hut for five years.”

Nathan Showers and his partner Tracy Joscelyn are camp managers for Nightingale and live at the rest stop with the other residents. Showers, who is homeless himself, has been a recovering addict for seven years and believes his life experiences have helped him develop a mutual sense of understanding with those staying in the huts.

“I feel it's different than when you go to a psychiatrist because I'm one of them. I've been one of them, so I know how to relate with them,” he said. “What we always look for when we vet people into this camp is people that want to better their lives in positive ways, not just sit at the speed bump, wondering if they should go over and change their lives.”

The vetting process has been a long term priority for Nightingale, and Nelson believes it was “instrumental” to the city of Eugene allowing the camps to be built at all. She also credited de Buhr and his wife Fay for setting the blueprint for requiring comprehensive applications, saying “They were sort of the forerunners. They cleared the path.”

The application includes a background check and list of strict rules, part of which reads, “As a member of the Nightingale Hosted Shelters community, I understand that I may be evicted for commission of any of the following acts:

Another key component in getting approval from city councillors was convincing them to classify Conestoga huts as tents. “If we hadn't gotten that break and the city allowed us to consider these as tents and build them as movable temporary shelters, we wouldn't have the hut program today,” Schmidt said.

Nightingale has built rest stops in several locations since 2014 but dealt with roadblocks that forced it to pick up and move elsewhere each time. Following years of trial and error, it has finally found a stable home in a parking lot next to the Good Samaritan Society, which provides the camp’s residents with power and running water. “We've been steady there,” Nelson said. “The neighborhood has been very accepting.”

The Conestoga huts help create a sense of community among the residents. “Sometimes, you come back to the rest stop at the end of the day and somebody's got coffee on, somebody may be making a stew or something,” Nelson said. “It's more like coming home, you know, not just walking into a cold empty campground.”

Schmidt recalled stopping by the camp one day and noticing a hut door was left open. He later found out that the resident was returning from the hospital that day and the others had cleaned his space, washed his laundry and linens and were airing out the hut for him.

“He was a part of the family now, and the community was reaching out to take care of him as anybody would for a son or a daughter or a brother or a sister, and so that gave me kind of the feeling of the dynamics of the little village that's grown up here and how positive it was for the residents,” Schmidt said. “It gave me a good feeling that people who are otherwise marginalized had made a society that was so functional.”

For Showers, the most fulfilling part of his position is seeing residents make it off the street and into permanent housing. He mentioned one individual who was a young recovering drug addict who was able to find a steady job and eventually move out. “It’s his first time ever in life being able to have his own key to his own place,” Showers said. “He's sober now. He just texted me the other day saying how it's so beautiful to be able to take a shower before he goes to work.”

Nightingale’s funding comes primarily through donations and their various fundraisers. It will be holding a sock drive on Dec. 14 at the rest stop on 34th and Hilyard Street to collect winter socks for its residents and enjoy “an evening event with caroling, a fire and cookies.”

Anybody that does not have access to a printer can get an application from Community Alliance of Lane County at 458 Blair Blvd or the Nightingale camp at 3500 Hilyard St. Nightingale advises that people call a camp manager at 541-870-5388 if they want to pick up an application there, and it also offers to help people fill out their applications if needed.