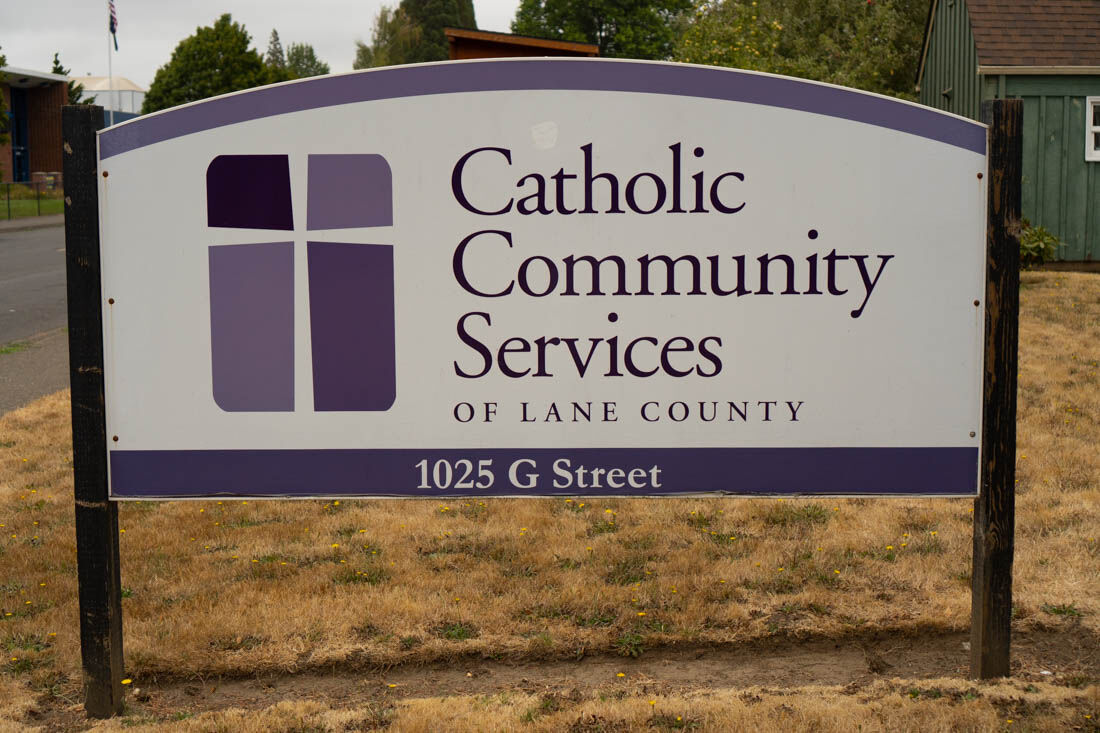 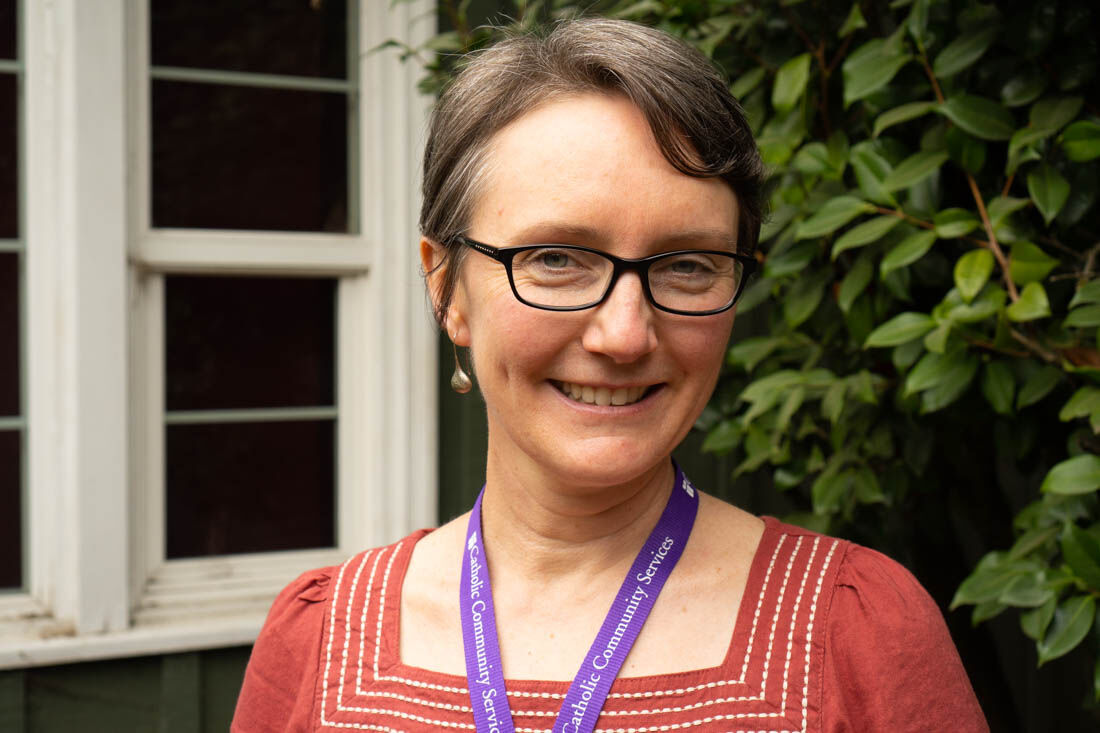 Christine Zeller-Powell chats about the long-awaited cloudy weather and how things are starting to get busy again at Catholic Community Services in Springfield. (Ali Watson/Emerald)

Christine Zeller-Powell chats about the long-awaited cloudy weather and how things are starting to get busy again at Catholic Community Services in Springfield. (Ali Watson/Emerald)

Catholic Community Services of Lane County and the Refugee Resettlement Coalition will help resettle Afghan refugees in Lane County following the Taliban’s seizure of Afghanistan. The nonprofits are preparing to help a family of Afghan refugees arriving in Eugene through the help of a veteran, while Oregon politicians are pushing the Biden administration to lift the United States’ refugee admissions capacity.

CCSLC and RCC are preparing for potential incoming Afghan refugees after the United States withdrew from Afghanistan and the Taliban took over the country.  Both nonprofits are looking for people in Lane County with ties to Afghanistan, so they can resettle Afghan refugees who have Special Immigration Visas.

CCSLC has a contract with the state department and receives federal funding to support refugees resettling in the United States, according to CCSLC immigration attorney Christine Zeller-Powell.

CCSLC’s Refugee and Immigrant Services Program provides services to refugees once they arrive, Zeller-Powell said. These include transportation from the airport, immediate housing stocked with culturally appropriate food, doctors visits to get vaccinations and check-ups, help setting up Oregon identification, food stamps and the Oregon Health Plan, connections with employment services and enrollment in English language classes.

CCSLC also enrolls refugees in cultural orientation classes to adjust to American culture, learn their rights as refugees and talk about the emotional journey of leaving their homes.

“It’s a huge challenge to move to a different country and to flee persecution and violence and get somewhere safe,” Zeller-Powell said. “Then, you’re established and you rebuild. That’s incredible to me.”

The nonprofit has helped resettle approximately 40 refugees and asylum-seekers since its program first began five years ago, Zeller-Powell said.

The CCSLC and RRC are looking for U.S. ties for incoming Afghan refugees because CCSLC’s contract requires that refugees they serve have a tie to the community.

Congress enacted the Emergency Security Supplemental Appropriations Act on July 30, which authorizes an additional 8,000 SIVs for Afghans who worked on behalf of the U.S. government in Afghanistan.Zeller-Powell said the Afghan refugees must have U.S. ties, which includes family or friends, in order to resettle in Lane County.

Bryan Boender, a veteran who served in Afghanistan from 2007 to 2008 and a Eugene lawyer, is one of those U.S. ties. Boender worked alongside his friend, who was an Afghan interpreter for the U.S. military. Boender asked that the name of his friend be kept anonymous for the friend’s safety.

“I’ll never forget it,” Boender said. He said he was at dinner with his family and friends when he received a text from an officer in his company indicating that his friend had a SIV application and a case number awaiting approval. His friend was stuck in Kabul with his wife and four young children, Boender said.

Boender spent the next nine days and nights in contact with his friend, advocating for his application’s approval through government agencies, private foundations and public congressional offices.

After the friend’s application was approved, the next challenge was getting him and his family to the airport, Boender said.

“Imagine giving a family of six directions to a riot,” Boender said. “But it’s not just a riot. It’s a warzone.”

Boender said the family experienced many close calls. But, one morning, Boender woke up to an email with one word: “Jackpot.” Attached was a picture of his friend and the friend’s family with a high-ranking military officer who would help them board a flight out of Kabul.

Boender said he is excited to reunite with his friend and meet the friend’s family.

“It didn’t have to end this way,” Boender said. “But it means a lot that there are going to be opportunities for him and his family in our community.”

Although Boender said he does not know when the family will arrive in Eugene, he does know that they are now safe in the United States. “I would love to have six more spots at my table at Thanksgiving,” Boender said.

Boender and his friend’s story is one of thousands. The United States evacuated roughly 11,000 people from Afghanistan, but 118,000 SIV-eligible Afghan citizens and dependents still remain, according to an Aug. 23 report.

Although Eugene does not have a direct role in federal and state policies related to refugees, Eugene Community Relations Director Laura Hammond said the city is committed to supporting a community where everyone feels welcome. The city’s Human Rights and Neighborhood Involvement Office is available to assist refugees if they are victims of hate crimes or discrimination while living in Eugene, she said.

"In Oregon, we welcome refugees from around the world, recognizing that resettlement is a lifeline our country provides for survivors of violence and oppression,” Brown wrote. “We all thrive when we accept refugees into our communities. We benefit from the diversity of thought, opinion, and culture that refugee families bring.”

Oregon has welcomed more than 75,000 refugees since 1975, and refugees are a vital part of the fabric of Oregon’s history, culture and economy, the statement said.

CCSLC’s Refugee and Immigrant Service Program encourages those who could be a U.S. tie or know of affordable three-bedroom housing near public transportation in Lane County to contact the program at 541-345-3628, or email RISP@ccslc.org.