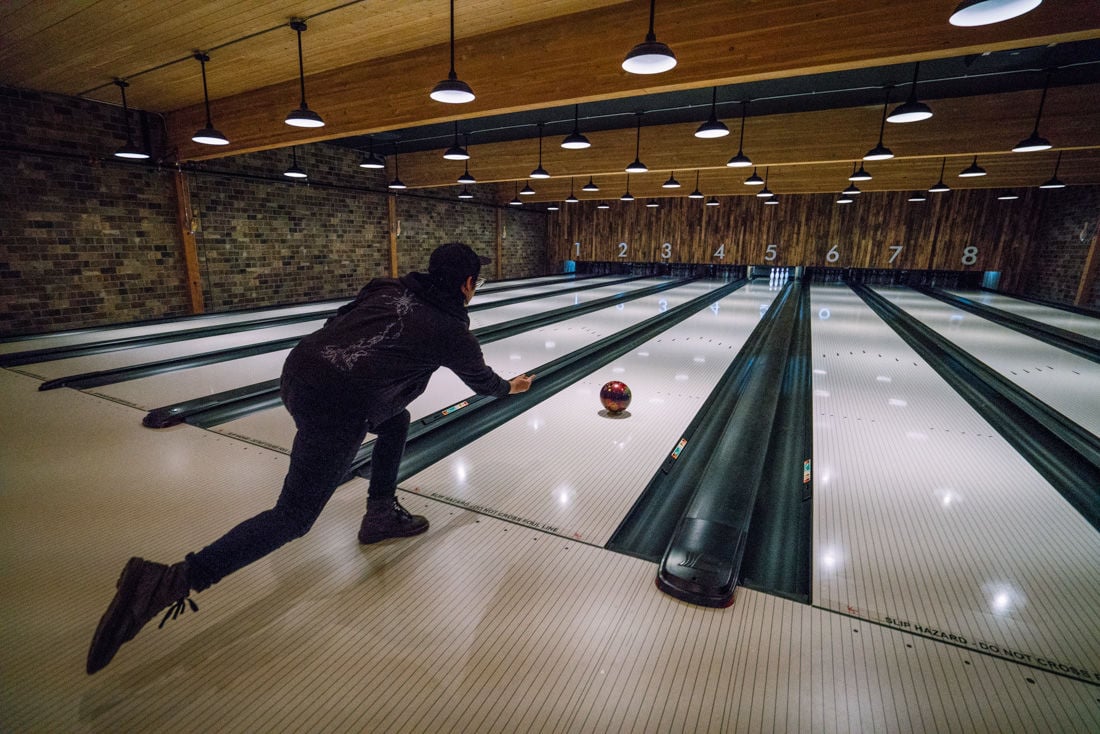 Crystal Rose, a Lane Community College student, has worked at Lane 25 since its opening two months ago. While the bowling alley generally keeps her busy with maintenance and running the front desk, the early evening lull offers her time to practice. (Dana Sparks/Emerald) 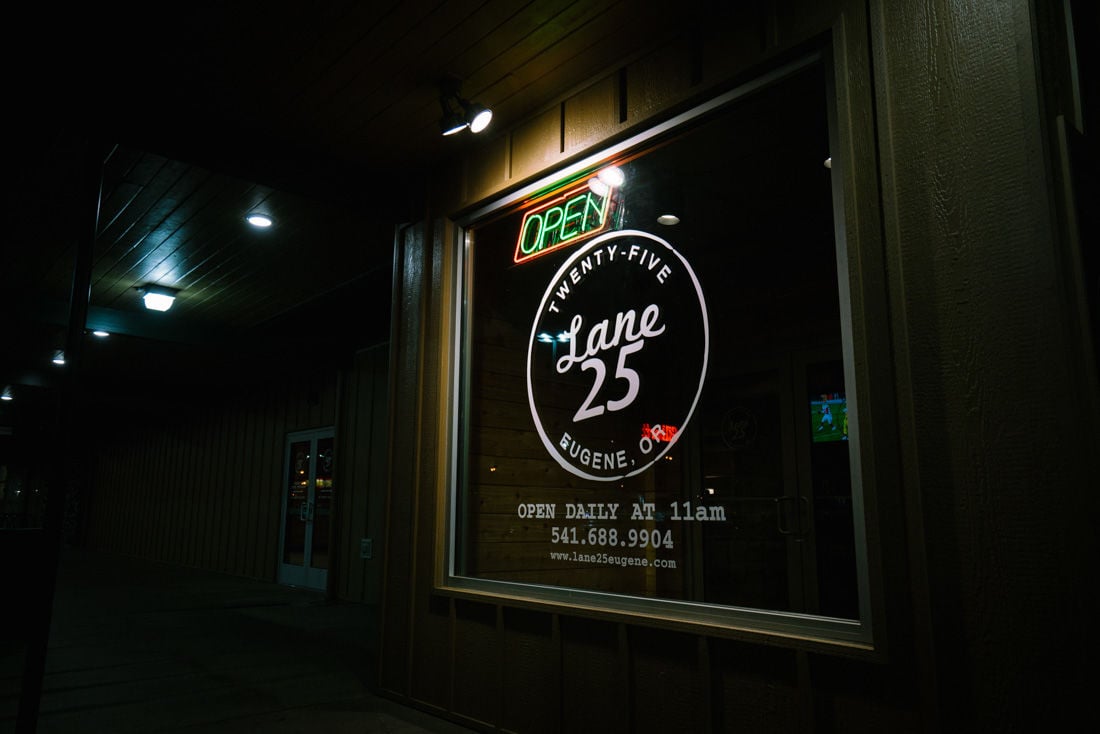 Lane 25 is nestled right beside Strike City Lanes Bowling Center off of Highway 99 in North Eugene. The newly opened space features a pub, dining and bowling for people 21 and over. (Dana Sparks/Emerald) 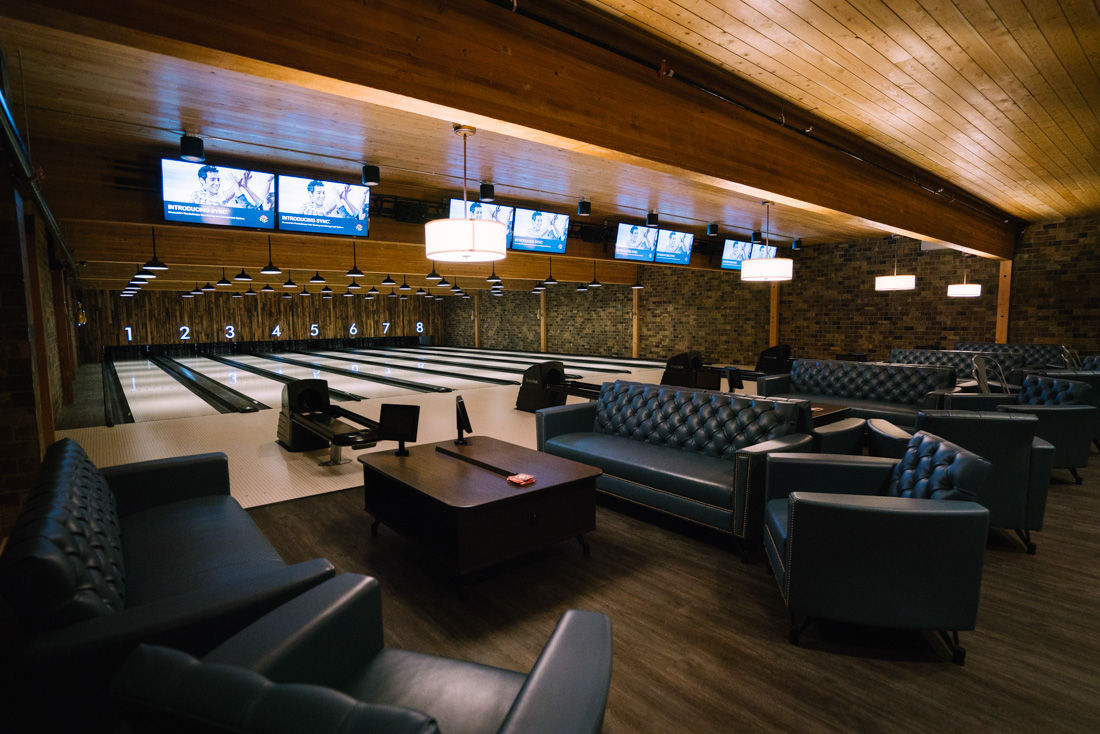 An early Monday evening at Lane 25 might offer a more private setting for visitors. The eight lanes and lounge is tucked away behind the dining area and bar. (Dana Sparks/Emerald)

Eugene’s bowling community hasn’t quite been the same since 2015, when an electrical fire reduced Southtowne Lanes, Eugene’s oldest bowling alley, to ashes.

When the smoke cleared, three bowling alleys still stood: Emerald Lanes, Firs Bowl and Strike City. All three have a lot in common: All ages welcome, regular league hours, beer and drinks kept off the lanes. What’s missing is an environment geared towards college students — something Southtowne offered with its deals on larger private parties — late closing times and close proximity to campus.

Lane 25, which opened just last month in west Eugene, seeks to offer something new to the bowling community in Lane County. It was built in the space adjacent to Strike City, which shares an owner with Lane 25.

Steven Gilbert, who graduated from the University of Oregon in 1981 with a business degree, started planning to build Lane 25 seven years ago. Gilbert took advantage of the vacant space next door to Strike City.

Lane 25 is the newest addition to west Eugene’s Gilbert Center, a large building that also houses Putters, which features an indoor putt-putt golf course, as well as laser tag and an arcade center.

“The concept is simple,” Gilbert said. “21 and over, eight lounge-style lanes and an upscale tap house bar. It’s the perfect place for business parties and team building.”

The restaurant side of Lane 25 is all ages and has a long shuffleboard and pool tables. It’s connected to Strike City, Eugene’s biggest bowling alley, where all ages are free to bowl. The restaurant has a large stove oven for house-made pizza.

Before coming over to help manage Lane 25, Devin Cook, a 2016 UO graduate with a degree in Human Physiology, worked at Strike City throughout his time at UO.

“Studying cadavers didn’t help much when it came to ‘fixing a blackout on lane one,’” Cook said. “But it offered flexible hours to accommodate for my school schedule, which was a huge plus.”

Cook notes the couch seating, professional grade bowling balls and the brand new bowling shoes as a couple reasons why Lane 25 is like no other bowling alley in Eugene.

“As of right now, it’s definitely Eugene’s best-kept secret,” Cook said. “The 21-plus side has eight lanes for people to come eat, play and be merry, and the servers come straight to the lanes to make sure everyone stays happy.”

Last week, UO graduate Anna Carlson went to Lane 25 with a group of friends for the first time. Carlson was impressed by the large bar and restaurant vibe she felt upon entering the building.

“It almost feels like a cool new bar that happens to have a bowling alley,” said Carlson. “There’s couches and big booths. It was the perfect place for a large group to hangout and have fun.”

For the past five years, Lane 25 bar manager Kim Sisu, who graduated UO earlier this year, was a bartender at The Spare Room, which was owned and operated by Gilbert and located in the space that is now Lane 25. Sisu was instrumental in helping open Lane 25, making sure that it was properly staffed and taking care of the small details.

“I spent some of the summer while the bar was being built painting the inside and outside of the bar,” Sisu said.

Sisu notes the split bar allowing different age groups, as well as the close proximity to Putters and Strike City, as a unique function of Lane 25.

According to Sisu, what makes Lane 25 unique to all ages is the split bar: It allows kids and families on one side, and on the other, which is open for adults only, it allows 21-and-over customers something to do aside from just sitting in a pub for drinks.

“The bar being split into two sections is a great way to include different age groups and types of people that might want to come into the bar, depending on what kind of experience the customer is after,” Sisu said.

With a tap list made up largely of Oregon-crafted beer and wine, Sisu hopes to bring together local businesses for special events showcasing the best Lane County has to offer.

“Right now, I am planning a couple events with a few local breweries in order to showcase and support local businesses,” Sisu said. “Pretty soon we hope to have daily specials, including half-price bowling Mondays and burger and brew Thursdays will also be going into effect.”