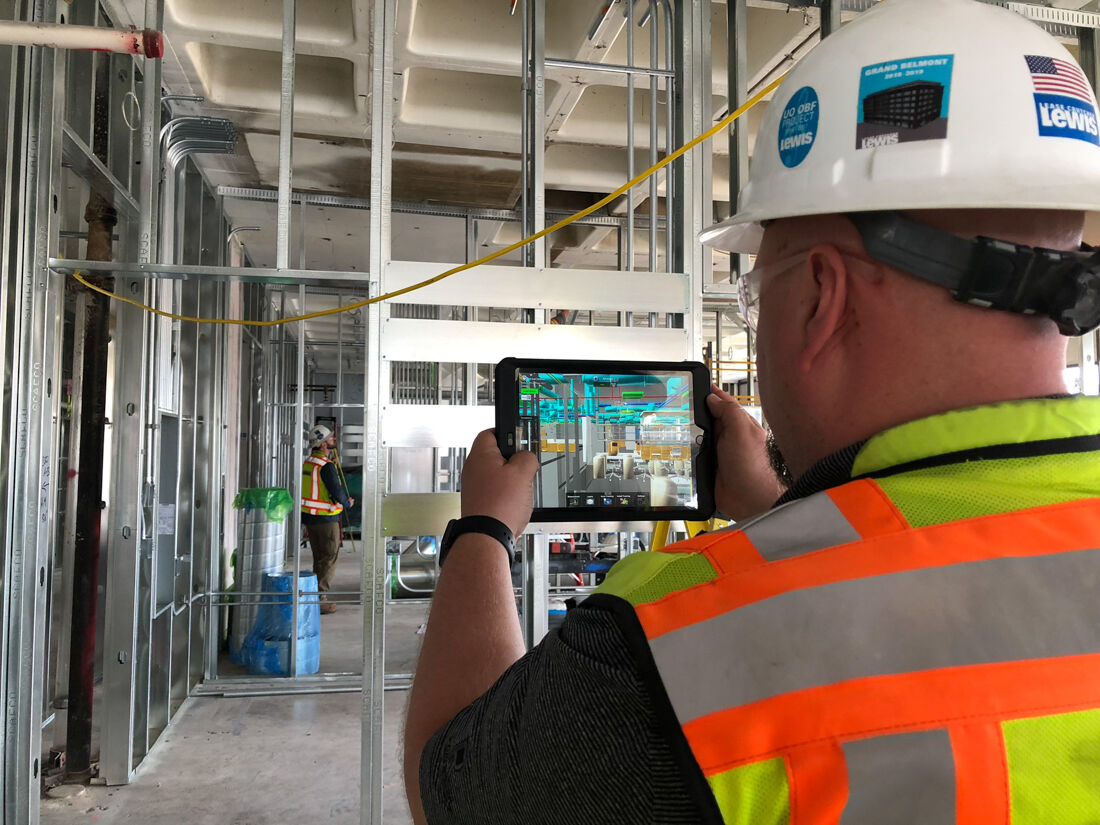 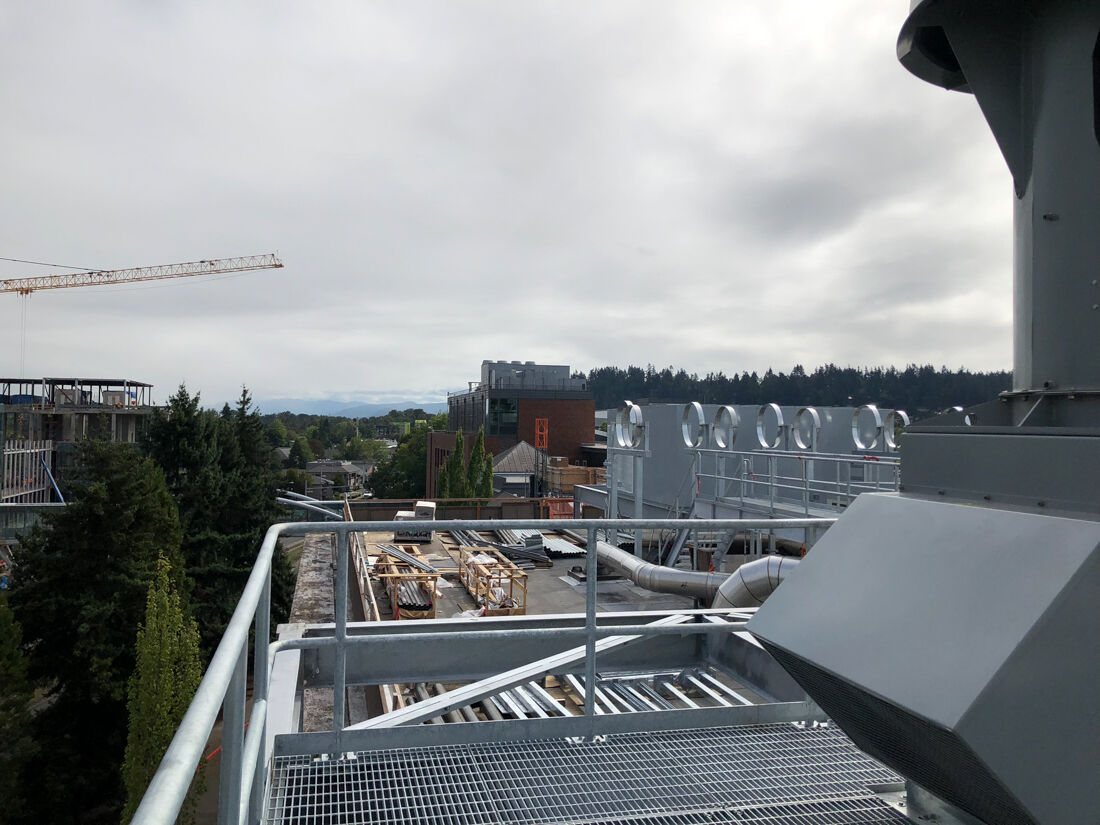 View from Klamath Hall roof looking east down Franklin Boulevard toward the Lewis Integrative Science. Exhaust stack to the right with round duct supports and supply air platform and fan beyond. Courtesy of TVA Architects. 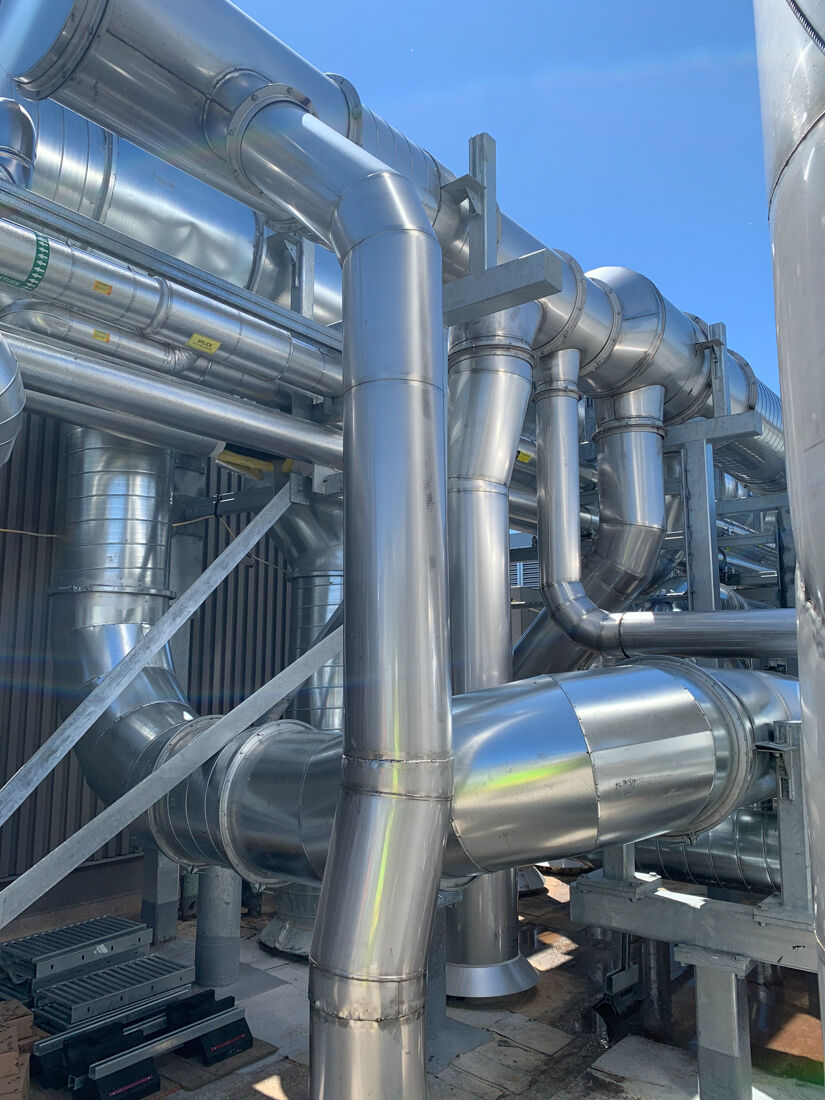 Exhaust stack on the roof of Klamath Hall. Courtesy of TVA Architects

The University of Oregon completed its final touches on the Klamath Hall renovation project in October. The project began November 2016 to redesign the hall’s third floor, which houses several science laboratories. The original building design, completed in 1966, did not meet current lab standards.

Klamath Hall’s concrete frame and waffle slab design, popular in the ‘60s, had short floor-to-floor height. As a result, the distance between the second and third floor was “not conducive to running all of the ductwork and piping and utilities that a modern lab requires,” Mandy Butler, principal for TVA Architects and UO graduate said. TVA Architects is a Portland-based firm that conducted the third-floor renovation.

“It was really unsafe,” UO Owner’s Representative Denise Stewart said. The facility had back-to-back fume hoods — a ventilation device that reduces exposure to toxic fumes — and narrow aisles, making it difficult for researchers to exit the labs if an accident occurs. “If there’s an accident in that fume hood, there’s nowhere for anybody to go,” she said, “so getting out of that lab is problematic.”

“That’s to give that building another 50 years of life serving the students of the UO,” Butler said.

The renovation also included new collaborative spaces, such as a kitchen and work area for students and faculty. Klamath Hall has a new gender-neutral bathroom as well, which was “a nice addition that we’re all happy to have to have a greater degree of inclusivity,” Butler said.

The most challenging aspect of the project was completing the renovation while the building was occupied, Butler said. In order to decouple the third floor, TVA had to turn mechanical systems on and off, which required coordination to not disrupt other parts of the building.

To allow faculty and student research to continue on the third floor, TVA conducted the renovation in two phases, the first taking place on the south side of the building and the second on the north side. Faculty had to consolidate lab spaces during construction to ensure research remained undisturbed.

“Certainly, things got cozy during that time when people were squished together, but I think, as a whole, it went very well,” chemistry professor Mike Pluth said.

Pluth’s original lab had back-to-back fume hoods, an awkward layout and around 15 sinks, which he found excessive. He said his renovated lab space is much better.

“It’s hard to believe it’s the same building,” Pluth said. He described Klamath’s third floor as having a “better layout that accommodates how people do science now rather than how people did science 40 years ago.”

This story was updated Friday morning to reflect that Mike Pluth is a professor in the chemistry department, not biology.

Claire is a news reporter for the Daily Emerald. Send her news tips at cwarner@dailyemerald.com