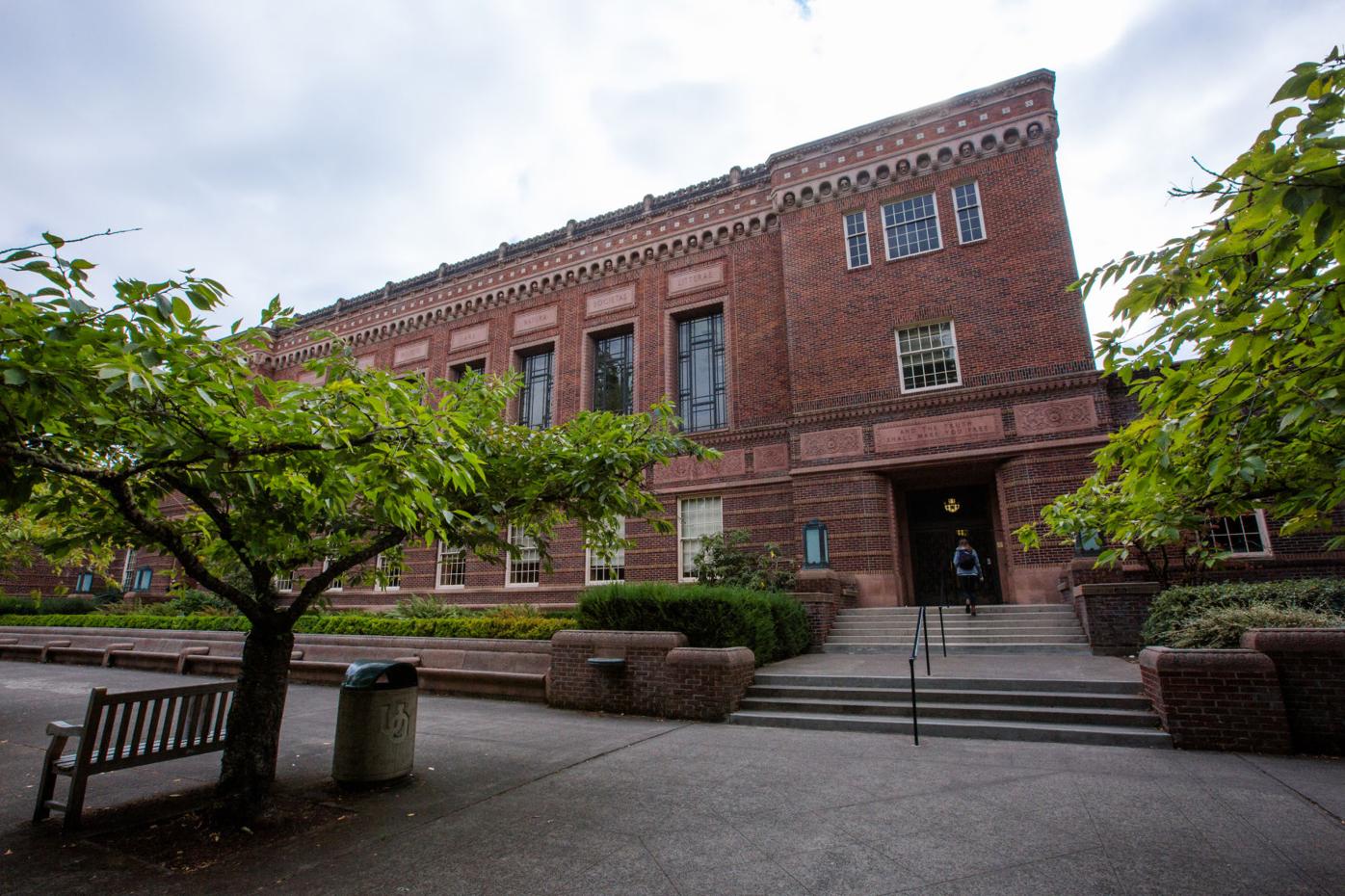 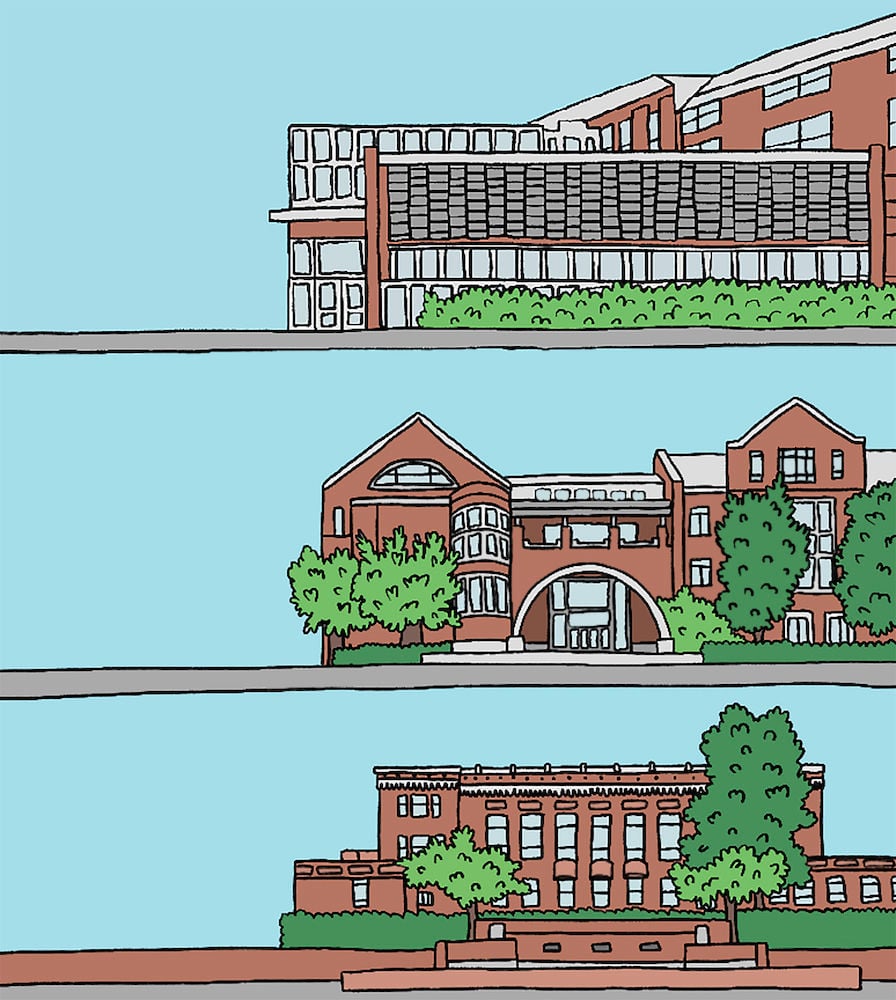 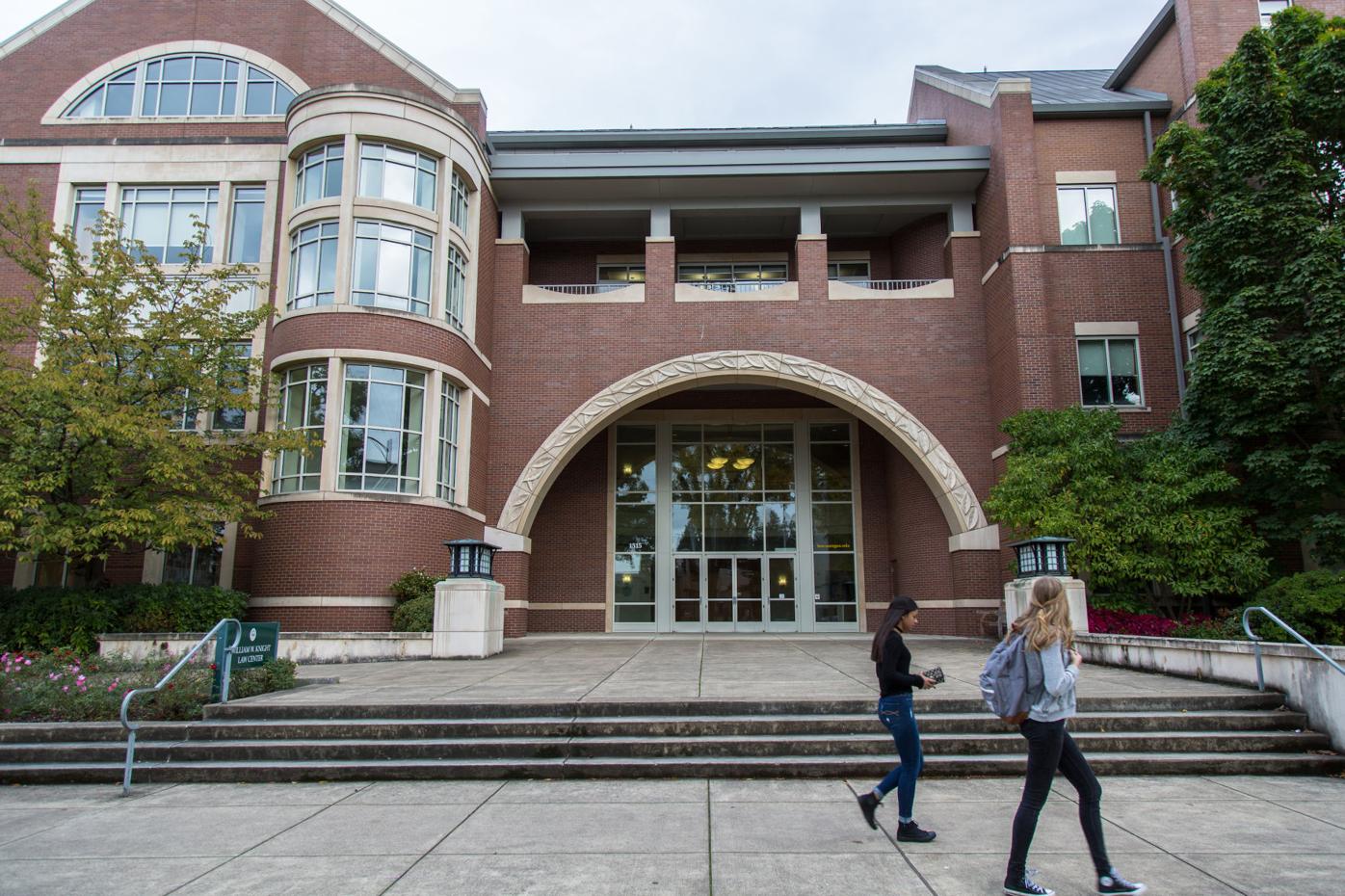 The first books were donated by Oregon financier William Villard. It wasn’t until 1907 that the doors to the first library opened, in the building now known as Fenton Hall. As the collection expanded, a second library was opened in 1937. In a 1937 letter, it was simply called The University of Oregon Library Building by librarian Matthew Hale Douglass. At the time, the student population was 3,500, and the library amassed a collection of 285,000 volumes.

Three major expansions and a name change later, the Knight Library doesn’t work alone, supplemented by the likes of the John E. Jaqua Law Library and the Allan Price Science Commons and Research Library. Despite the different buildings, Dean of Libraries Mark Watson identified not only the UO libraries but every library in the Pacific Northwest as “one collective, gigantic library.”

Part of the collective library concept manifests through the continued evolution of the library model, accommodating and providing access to information. That access comes largely through technology and using the connection that academics, students and citizens have through the internet to educate, something Watson called "ubiquitous connectivity." He warned students of underestimating the resources of the library system.

“I made that mistake. I wasn’t sure I needed help with anything,” he said, referencing his time as a student at Whitworth University. Now, with databases and a wealth of information available online, he said that it would be easy to dismiss the importance of libraries — and librarians in particular.

“You’ve got 400, 500 databases online,” Watson said. “Do you know where to start?” Librarians, he said, would become guides. “The best will be Shamans.”

Watson said that as digital collections grow, library space allocation will change. Most of the space is used to house print materials, Watson said, and as books and journals gain “electronic surrogates,” there will be less of a need for warehousing books. Many institutions use off-site storage, organizing their materials into shared repositories, he said.

“The resulting gains in available space are allowing libraries to create new types of space to meet the needs of changing curriculum,” Watson said. As space opens up in the library, collaboration areas, labs and technology centers would increase.

Watson did not foresee any positions being cut through the digitization process. “If anything,” he said, “we may need to add capacity.” Instead, he saw the need to shift staff into new and different roles, repurposing positions to address technological efficiency. Among the new and emerging areas, Watson mentioned support for the digital humanities, online learning, data mining and open education resources. “To do this,” he said, “the challenge we face is providing library employees with opportunities for training and professional development.”

The Digital Research Education and Media Lab debuted last fall in its home on the Knight Library’s ground floor. The DREAM Lab is designed to “provide a space for faculty and graduate students looking to build digital scholarship,” according to Digital Scholarship Librarian Kate Thornhill. One skill digital scholarship librarians are trained for is helping faculty redesign their courses to accommodate open access resources, free materials available online.

That was what originally inspired Open Education Resource Librarian Rayne Vieger. Starting in graduate school, Vieger helped put technology in the hands of educators. One of her fundamental questions for faculty in her curriculum redesign process is, “How much does the textbook cost?”

A January 2019 Oregon house bill established new requirements for how Oregon’s state universities should consider the affordability of textbooks, including low-cost or no-cost open education resources. The bill was signed by Oregon Governor Kate Brown in May, sending the act into effect Jan.1, 2020.

Being able to provide materials to students in need was one of the main motivators for Thornhill to enter the field after serving as a teaching assistant at Dartmouth. Her postcolonialism lesson for a Visual Culture class featured Public Enemy’s 1988 music video, “Fight the Power.” She was shocked by how few students could pull historical context from the video and saw working in libraries as an opportunity to promote those concepts — and democracy.

Thornhill saw libraries continuing digital scholarship efforts. Vieger stressed the importance of students evaluating information in a digital context. "Librarians can help shepherd what processing can look like," she said, by teaching topics like copyright law and fair-use policy.

Speaking in specifics, though, Thornhill was hesitant to forecast the DREAM Lab’s future. “It’s kind of like we’re building a plane while we’re flying it,” Thornhill said.

Despite certain aesthetic differences, the efforts of both the DREAM Lab and the Special Collections and University Archives are similar — as Lead Processing Archivist Alex Bisio said, “open access is equal access.”

Bisio has worked for Special Collections for over two years, assisting in the preservation of documents, books and papers. Their collection is varied, including everything from official UO documents to children’s books.

The archives also contain clay tablets, one as old as 2350 B.C. The Mesopitamian tablet is the dedication of a temple, built as a shrine to the patron god of Babylonia. All three are available to view by appointment with the Special Collections reference desk.

But the future of archiving is not all manuscripts and clay tablets — at least, not entirely. “Our collection is going to look different as we move into the future,” Bisio said, with less distinction between physical materials and materials known as “born-digital” — those in the form of Word documents or PDFs. “We do a lot of digitization now,” Bisio said.

Their full-time staff of six, with the help of graduate students, receive requests from the public for digital copies of documents. The materials are reproduced, sent to patrons and uploaded to Oregon Digital, an online library database for Oregon universities.

“We’re all striving to make a more diverse narrative,” Bisio said. “We want to bring more and more voices into the archive.”

Linda Long’s work as curator of manuscripts contributes to that effort. Their collection development policy defines the Special Collections’ considerations when bringing in new material. Their priorities include women, gender and sexuality collections, multicultural collections and international collections, as well as conservative and libertarian documents.

Special Collections holds a large number of libertarian and conservative writings, including Tillamook’s Ku Klux Klan papers from the 1920s and historic scholarly analyses. Bisio said the documents have attracted the attention of scholars trying to understand the modern political context.

“While developing our research collections,” Long said, “we make deliberate attempts to acquire collections that reflect racial, ethnic, religious, gender/sexual orientation, and all ranges of human life and experience.”

Dean Walton, the science outreach librarian for the Science Library, said the future was information storage. "It's the curation of a tremendous amount of digital material," Walton said. "That'll be a challenge for us."

Walton has worked to foster scientific learning with students at all grade levels, from middle school to graduate programs. He’s run engineering clubs at Sheldon High School and engaged Cal Young Middle School students with rocket ships. The core of his work with students is to “get them aware and using technology to further their education.”

The MakerSpace is an area within the Science Library that speaks to Walton’s core mission. The space opened three years ago, with Walton helping to design and plan everything from the equipment provided to proper fume ventilation. The MakerSpace came equipped with it all — 3D printers, laser cutters, computer-controlled routers, laser scanners and industrial sewing machines. “Cost is minimal,” he said, “so we can remove as many barriers as we can.”

The removal of barriers would promote innovation and experimentation, something essential for libraries, Walton said. “Libraries are the sandbox and the common ground of education.”

Innovation was something familiar to Megan Austin. As law instruction librarian, she brought the first fully online course to the University of Oregon Law School and won the 2019 Faculty Excellence in Universal Design Award. Austin was hired in 2016 to enhance and innovate the law school’s teaching methods. One central challenge for Austin was teaching legal research, a topic with which she was well versed.

Austin started law school in 1990 at the University of Arizona. When she was a student, Westlaw and LexisNexis, two legal research online tools, were coming into the foreground. The programs were presented on CD-ROM and were by-and-large not trusted by law professors. Students could only use the programs after they had done the bulk of their research. Now, according to Austin, most students aren’t cracking a book when conducting legal research.

She designed her course to be practice-oriented, engaging with the ever-popular topic of career readiness. “Law students are graduating from law school and may not be as competent with the tech they’re using,” Austin said. “Our job is to prepare them.”

The dean of libraries was particularly invested in the concept of innovation and the future of the UO libraries. "It's an obsession of ours," Watson said. He produced a manila folder, packed with a paper trail. It led to a list of possible projects for the UO libraries’ 2020 Strategic Map. The list was originally comprised of more than 60 proposals, each with an estimated amount of money. The proposals were organized to address five core goals — information and knowledge, student success, research and engagement, learning environments and organizational excellence.

Deliberations in December 2019 led to a list of 10 projects to fulfill in the new year. Among the selected projects was enhancing UO libraries’ collaboration with the open resource knowledge base Wikidata, creating a student success plan for completing term-long research projects, text and data mining efforts and a proposed Virtual Reality Lab in the Science Commons.

Watson said that the strategic map pointed to the main goal of the UO libraries. Separate from the dollar signs and the buildings, the libraries’ mission was simple: “We are here to support you in your academic growth and development as a student, as a human being and as a citizen,” he said. “We love to do that work. Those things really give us goosebumps.”