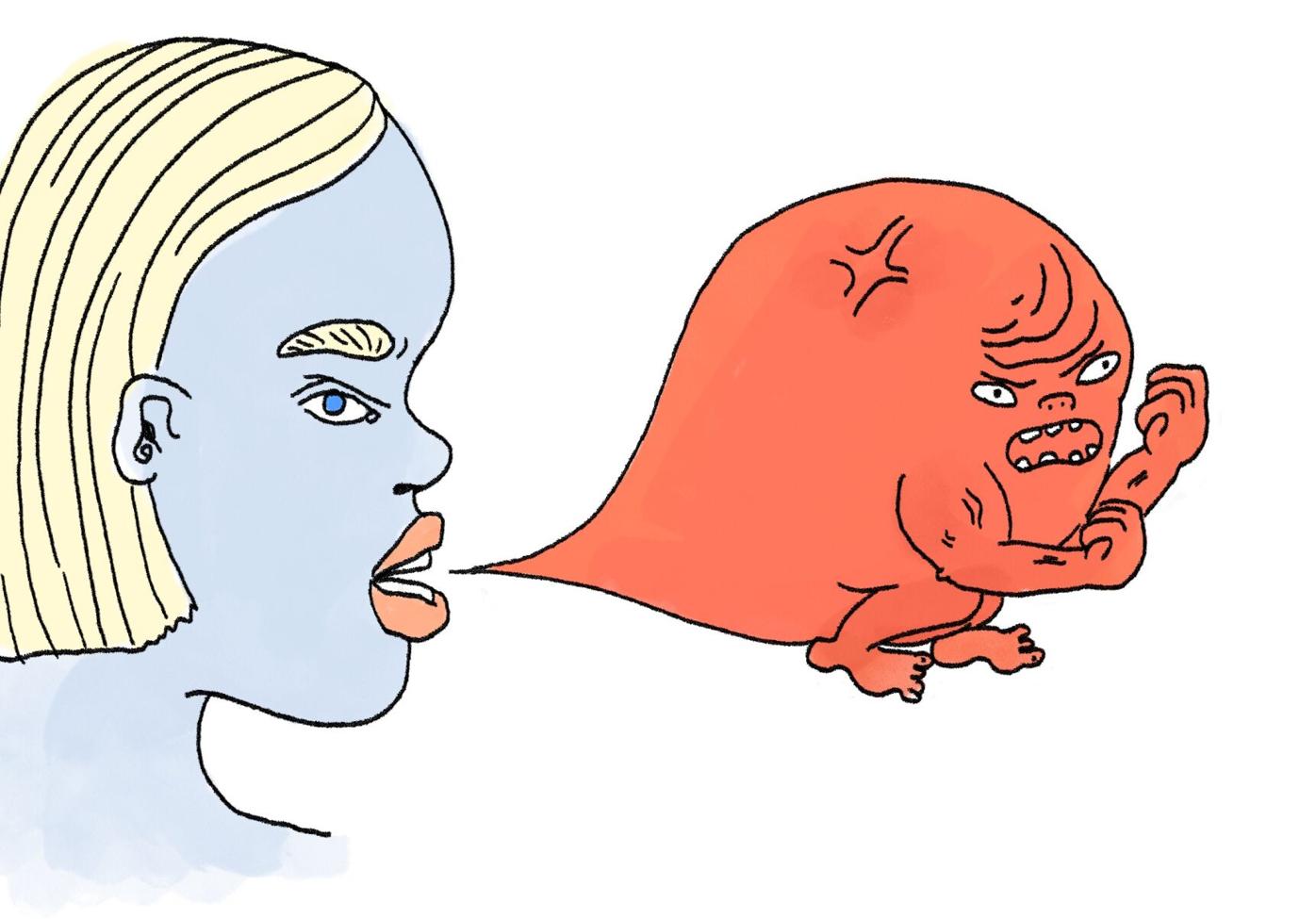 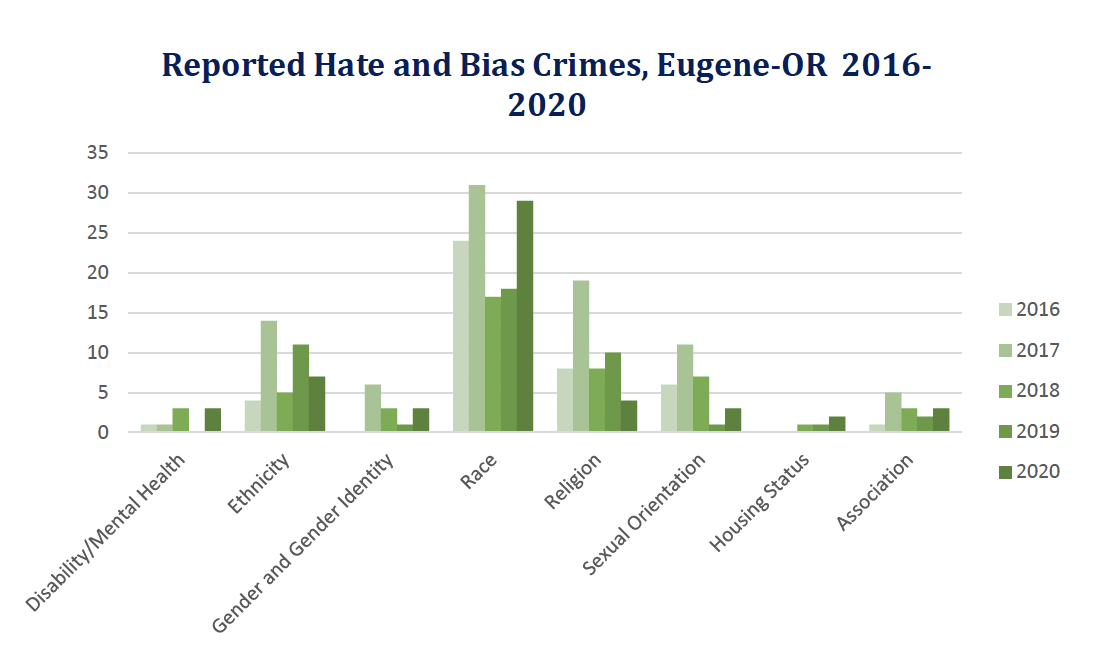 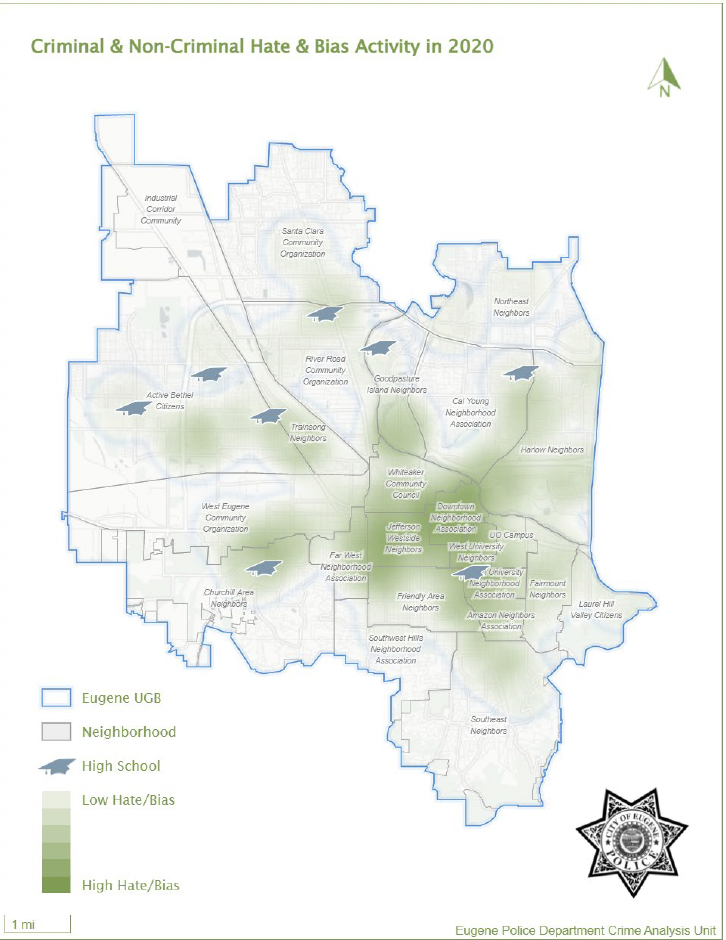 Hate-related crimes and incidents in Eugene increased 40% from 2019, according to the city's recently released 2020 Hate and Bias Report. The city recently increased fines for hate incidents in an attempt to deter bias crimes, but those in the community say these numbers reported don’t show the full scope of what’s going on.

According to the report, someone commits a hate crime when they are motivated by bias to break the law. Hate and bias incidents are similar, but incidents do not involve criminal activity.

The report revealed that there were 93 hate and bias incidents last year, with 54 of those being criminal in nature.

However, these statistics do not show the full picture. Eric Richardson, the executive director of the Eugene/Springfield NAACP, said that it’s great that people are reporting these cases to law enforcement. But he said the NAACP gets reports too — and those numbers are even higher.

Richardson said the NAACP forum received roughly twice as many incident reports than the number recorded by the City of Eugene.

Mica Contreras, the justice and equity program organizer at the Community Alliance of Lane County, said a lack of trust with police and the justice system plays a role in the lack of reporting.

“Hate crimes are still underreported because the communities targeted are also disproportionately policed,” Conteras wrote in an email to the Emerald. She said many Black and Brown people do not trust the police to listen to and file hate crime reports and find it traumatic to report an incident.

Underreporting hate and bias incidents is not a new issue. In a July 26 City Council workshop, Fabio Andrade, Human Rights and Equity Analyst for the city, acknowledged that Eugene’s count is probably low.

The data only covers reports from 2020, so incidents and crimes that occurred in 2021 are not in the report.

These disproportionate numbers are likely a result of 2020’s Black Lives Matter protests following the murder of George Floyd, Contreras said. She said marginalized groups usually see an uptick in hate crimes during times of protest.

“We can look back through history and see that whenever there have been advancements in racial justice, they have been quickly followed by a backlash in attempts to impede the advancement of liberation and equality,” she wrote. “There is nothing different about this time.”

Richardson said the rhetoric of political leaders also plays a role in how often hate crimes occur. According to Andrade’s data at the City Council Workshop, Eugene saw a sharp increase in hate crimes in 2017 — just after the election of President Donald Trump. This timing, Richardson said, is not a coincidence.

“You have a president calling countries in Africa names that also reflect on the people of those countries,” Richardson said. “When you have 75 million people voting in the affirmative for that type of rhetoric, you're gonna see that in our community.”

During the July 26 workshop, the City Council voted unanimously to increase the penalty for bias crimes, raising the fine from $2,500 to $6,250. This is the maximum fine that can be given for a misdemeanor under Oregon law.

Richardson said the motion showed that the government acknowledges the issue and is trying to alleviate it. He said it was no different from a fine for not wearing a seatbelt — it’s meant to keep people safe.

“This is a safety issue; it is a health issue,” Richardson said. “We want to eliminate racism and these types of incidents because it actually is a drain on our culture, our society, our income and our health.”

Contreras said the fine increase was “shortsighted.” It doesn’t address hate crimes effectively, she said, and doesn’t have a mechanism in place to help the affected communities. She pointed to an article by the National Institute of Justice that said increasing penalties does not deter crime.

“We have to address the root causes of hate/bias crimes as opposed to focusing all of our energy into dealing with them after they have occurred,” she said. “We keep falling back on punitive, carceral systems because they are familiar, but in actuality, they do more harm than good.”

To break out of that system, Richardson said it’s important to celebrate different cultures and support those experiencing hate. He said people need to redouble their efforts to come up with solutions that help people.

“It's about re-educating our system and having some kind of belief that it matters and how we can make a difference,” he said.

Richardson said he’d like to see more collaboration between government agencies and organizations such as the NAACP when it comes to reporting hate and bias crimes. Rather than different agencies having different numbers, he said he’d like to see a mechanism for Lane County as a whole — especially because some areas don’t have a designated pathway to process hate crime reports.

For example, Springfield doesn’t have an equivalent to Eugene’s human rights office, Richardson said. This means residents need to go to the police rather than a specialized department.

Contreras said it’s also important to understand that the people committing these crimes are “people who are experiencing fear and a sense of powerlessness.” The community needs to organize its efforts to find the root of this hate, she said.

“We should all learn how to recognize and interrupt hate and bias as it is occurring,” Contreras wrote. “I believe we all have a responsibility to act to reduce hate.”