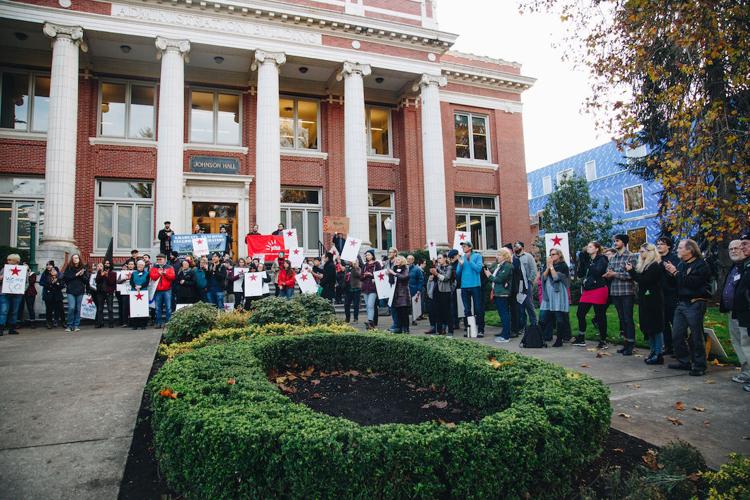 The kickoff rally for the Graduate Teaching Fellows Federation celebrates the procession of bargaining between the GTFF and the University of Oregon on Nov. 9, 2018. (Sarah Northrop/Emerald) 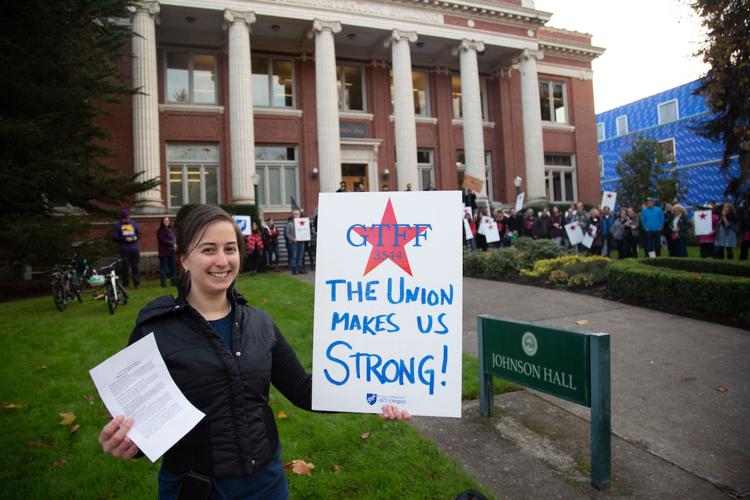 Kayleigh Peterman, Vice President for member communications of GTFF, talks to passersby about the GTFF's bargaining with the University of Oregon on Nov. 9, 2018. (Sarah Northrop/Emerald)

More than 50 graduate students, former graduate student union members and demonstrators gathered in front of Johnson Hall on Friday afternoon to mark the first day of negotiations between the Graduate Teaching Fellows Federation and the University of Oregon.

“Johnson Hall is where all the central administration is housed so it’s a way to force them to listen to us,” said Michael Magee, the president of the GTFF. “They have their agents at the bargaining table, but at the end of the day, this is the university and these are their bosses and they are the ones who have to make the movement and agree to actually finally support the graduate employees.”

The bargaining process happens every three years, and Magee says that goal is to finish negotiations by the time the current contract expires on March 31, 2019. He said that these negotiations can often go up to a year.

Magee says that the union is bargaining for living wages, more protection for international graduate teaching students, correcting the housing crisis in Eugene and getting for graduate students to receive wages throughout the summer.

Magee said that the vast majority of graduate students don’t receive funds over the summer, forcing them to find other sources of income.

“We’re under no illusions that we’ll get everything we’re asking for because that’s not how the process works,” he said. “But we’ll make demands and hope the university recognizes how important they are to the graduate employees and we’ll just keep pushing at the table.”

Amy Robbins, who is on the union’s bargaining team, says that the round of bargaining aims to include the voices of many graduate students.

“This year is our bargaining team consists of about 20 people and in previous contract seasons it’s been limited to about six,” Robbins said. “We’re really trying to represent a diversity of GEs and really be inclusive about our backgrounds and the kind of issues we bring to the table.”

Robbins said that the bargaining team is introducing language for issues such as anti-bullying and workplace protections.

The first day of bargaining allowed the union to share their concerns with the university in an uninterrupted manner, according to Robbins.

“The bargaining team presented our idea of what we would like to gain in our contract and the UO didn’t have a chance to read what we wrote so they had to sit there and listen and take it,” Robbins said. “It was very empowering because we got to present to our colleagues, our friends, our audiences and supporters what we were hoping to accomplish.”

This weekend also marks the 40th anniversary of the GTFF and some alumni were in attendance, including the GTFF’s first president, Jerry Lembcke.

“I came to celebrate the success of the GTFF up to this point and also renew some friendships with other people who were involved in the union 40 years ago,” Lembcke said.

Lembcke recalled and his friend Harry L. Humphries said that conditions had improved since the time they were graduate students. Graduate students now have healthcare coverage, which was not the case when Lembcke and Humphries were students.

“We didn’t have health benefits, I think we had one payment for dental,” Humphries said.

Lembcke recalled one time in which the UO wanted to raise rent for graduate housing, but the graduate students stopped that from happening.

“I stood in front of Johnson Hall for a rent strike. The rent was $25 a month and they wanted to raise it to $35. We struck, withheld rent and we won. We beat back the rent increase. That was really a forerunner to the GTFF. We did that and we won.”

Humphries says that the gathering and bargaining extends beyond the current negotiations — it’s about the importance of engagement in the workplace.

As for the union’s current contract negotiations, GTFF’s Magee said that the main goal is for both sides to come together to find common ground in which they can agree upon.

“Eventually, the goal is to reach a settlement with a university where we both agree that the progress we made at the table is sufficient and we settle on the contract,” Magee said.