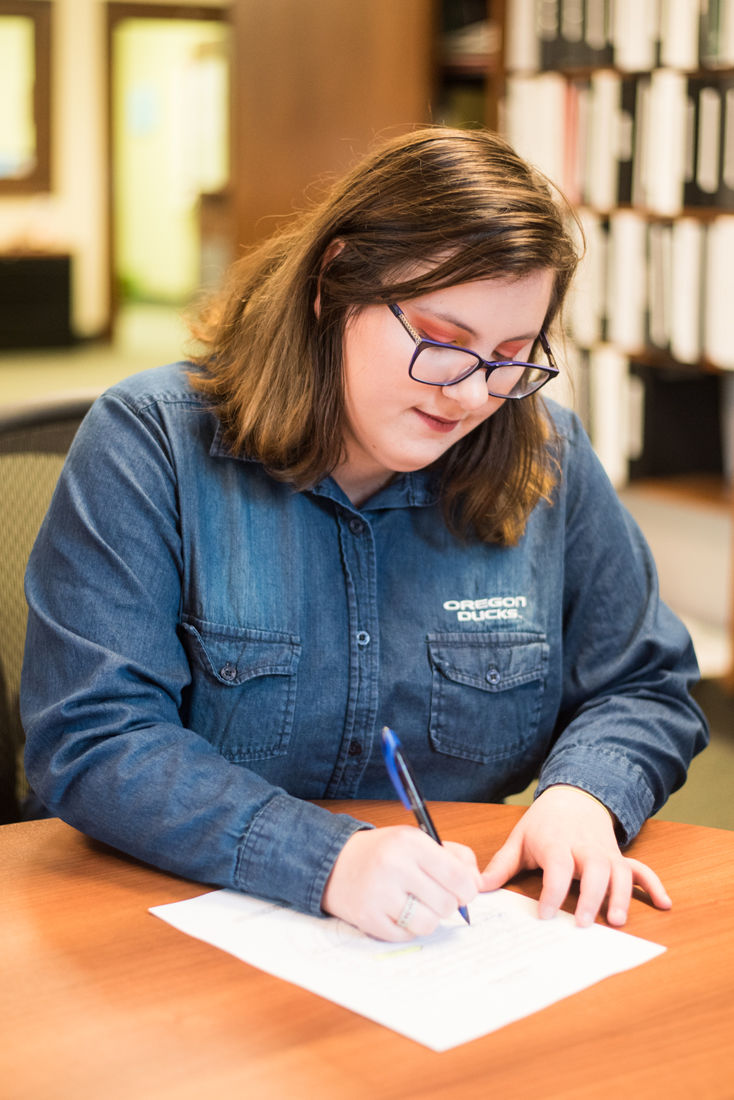 Katharine Wishnia, the newly appointed student member of the University of Oregon Board of Trustees, will officially take office on July 1, 2019. (Marissa Willke/Emerald) 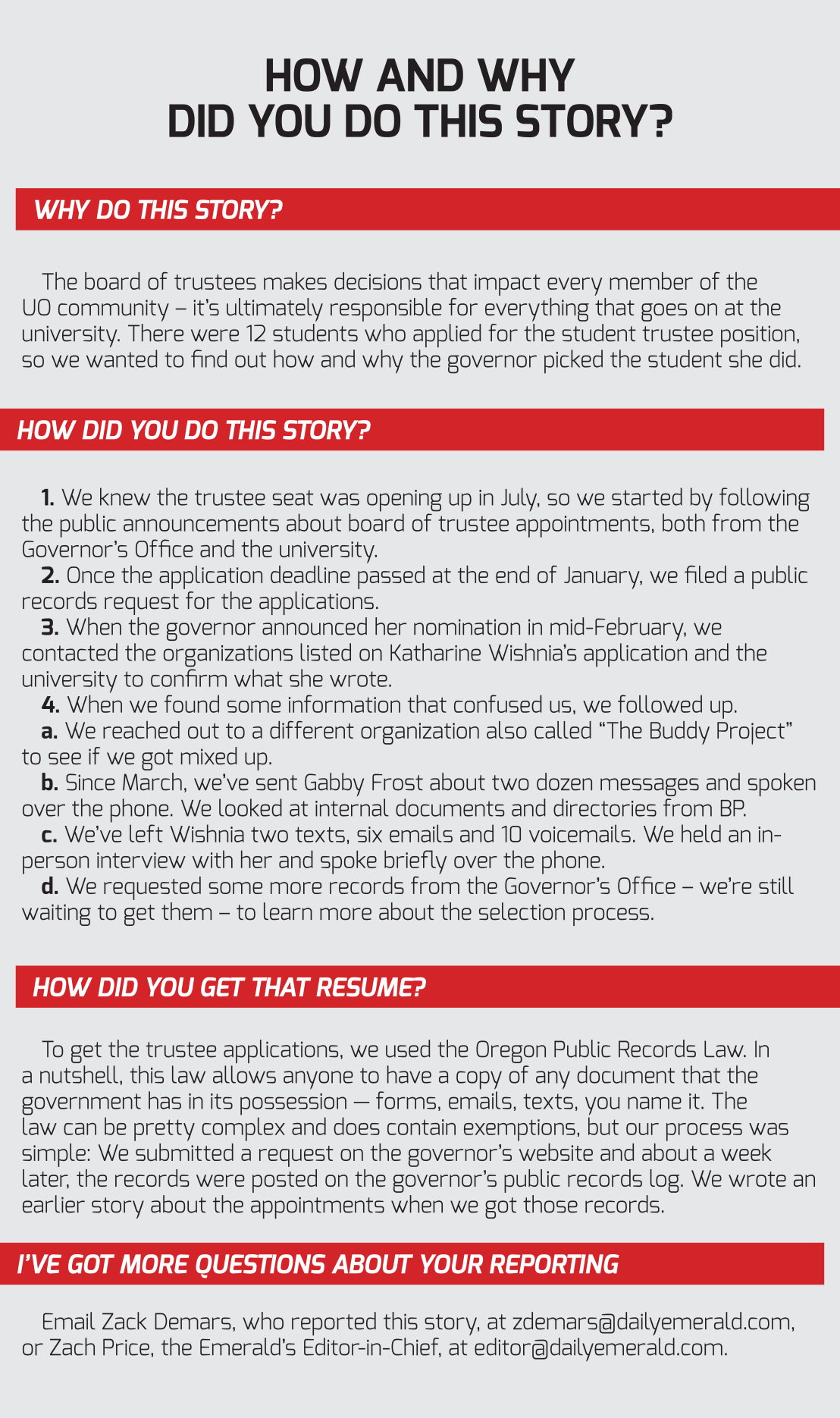 Katharine Wishnia says she had to ask her friends how to use the classroom desks in her first classes at the University of Oregon. The now-sophomore hadn’t used desks in a classroom before – before coming to UO, she had taken all of her classes through Oregon Connections Academy, an online high school.

Originally from Beaverton, Oregon, Wishnia will join the UO Board of Trustees as the board’s only student member in July. In February, Oregon Governor Kate Brown appointed — and the Oregon Senate later approved — Wishnia, a sophomore political science and psychology major, to the board’s student seat.

When her term begins on July 1, Wishnia will join the 14-member board, which oversees all parts of university business, such as setting tuition, approving new degrees and authorizing major construction.

In an interview, Wishnia spoke about how she plans to use her experience as a less traditional student – having come from an online school instead of an in-person high school – during her two-year term on the board.

“I still hope to be able to show online students that they can go to an actual public school and actually succeed and that they don’t need to be nervous,” Wishnia said. “Being able to say ‘I went to an online school, so I see a different perspective’ I think is really important because I don’t come from a public high school but also gives me a lot to learn.”

During her term as student trustee, Wishnia said she wants to focus her efforts primarily on tuition affordability and food security for students on campus. She said she’s had four friends leave UO this year because they’ve been “priced out” by the increasing cost of tuition.

“It’s so hard for students to be able to speak out about what they need when they’re just struggling on their own,” Wishnia said.

Aside from her online schooling, Wishnia’s resume shows that the political science and psychology major has kept busy with a number of clubs and organizations. She’s been an assistant taekwondo teacher, a PathwayOregon peer mentor and a recipient of the Clark Honors College’s diversity award, according to her resume.

She also listed service in mental health advocacy groups on her resume. While the Emerald confirmed Wishnia’s work with UO’s Student Mental Health Advocates, there are contradictions surrounding statements Wishnia made on her resume about another mental health support organization.

On her resume, Wishnia said she worked for the Buddy Project, a nonprofit which aims to prevent suicide and raise awareness about mental health by pairing people as buddies – but after reaching out to the Buddy Project and multiple requests to Wishnia, the Emerald has been unable to confirm that Wishnia worked with the organization in the roles she put on her resume.

Wishnia said she “helped lead and run programs, events, and crisis lines dedicated to mental health” as a “Buddy Project Ambassador,” and that she “[handled] a large amount of digital media, sorted through it, and also created [her] own digital content for the non-profit group.”

In the process of reporting a profile on Wishnia following her appointment to the board, the Emerald contacted Gabby Frost, the CEO and founder of the Buddy Project, who said that Wishnia’s description on her resume isn’t true.

“Unfortunately, her resume is not accurate, as I am the one and only person that works with Buddy Project’s digital media and content creation (since it was started),” Frost said in an email.

In a statement sent via university spokesperson Molly Blancett, Wishnia tried to clarify her work:

“I am sorry for the confusion around this item on my resume. I can understand how it was (is) confusing. I wanted to help clarify my volunteer time with the Buddy Project. I did indeed volunteer with them as an ambassador, but this was in a beta version of the program. (The program didn’t start until 2017 and I have my signed document for the 2017-18 year, but some people were testing it before that. I honestly do not remember the exact months I volunteered with them in its beta phase, but it would have been prior to this.)

“I’m also not surprised that the current CEO doesn’t remember me or my involvement in the program. She is very busy and I don’t expect her to remember all volunteers. My point of contact at the time is no longer with the organization and now studying abroad. This is probably just a situation of new organization not having completely [sic] records plus a little miscommunication. I hope this helps. I certainly would never try to exaggerate anything on my resume. I really enjoyed my time with the Buddy Project and think it’s a great program. Sorry for any confusion.”

In an interview, Wishnia said that the reason Frost might not remember her is because Wishnia worked with someone else in Frost’s current role before she took over, but Frost said that she’s been leading the Buddy Project since its inception.

“No, there wouldn’t have been anyone else who would have worked with her,” Frost wrote in a text. “I’ve never had a ‘helper’ or anyone else either, so she would never have been in contact with anyone but me.”

Records from the IRS show that Frost has been listed on the Buddy Project’s tax forms since it became a nonprofit in 2015.

The Emerald contacted Wishnia four times over a period of 12 days in an attempt to get the name of the person she worked with at the Buddy Project – but Wishnia never provided the name of anyone who could confirm she was on the team.

In a phone interview, Wishnia said her former supervisor doesn’t respond to press inquiries because that person works in the government. However, in a statement from Wishnia emailed to the Emerald by University Spokesperson Molly Blancett 12 days later, Wishnia said instead that the person couldn’t be reached because they are studying abroad.

Frost said that she had no record of Wishnia – who also goes by Kat, Kat Wis and Kat Wish – in any of her volunteer directories prior to February 2018. If she was a campus representative prior to that, Frost said, Wishnia would’ve been listed in those directories.

Wishnia was appointed by the governor from a pool of 12 applicants for the position to replace Will Paustian, the current student trustee. Five applicants were interviewed and, from that group, Wishnia was selected, said Lisa Morawski, the governor’s interim press secretary.

“The Governor was looking for a student with the ability to represent the university’s diverse student body and to understand the variety of challenges students face,” said Morawski. “Katharine was chosen as the most qualified for the position based on her experience, perspectives on the role, and ideas.”

After being nominated by the governor, Wishnia’s nomination was forwarded to the Senate after a hearing by the Senate Rules Committee.

“I think I’d be able to bring a new viewpoint to the board as a student and being able to help with issues and supporting the student body with topics such as tuition and academic programs,” Wishnia told members of the Senate Rules Committee at the hearing before her nomination. Committee members asked Wishnia no questions and unanimously advanced her nomination to the full Senate.

On March 25, the state Senate unanimously approved Wishnia’s appointment as part of a group of 40 nominations by the governor after a total of 30 seconds of discussion about all of the nominations.