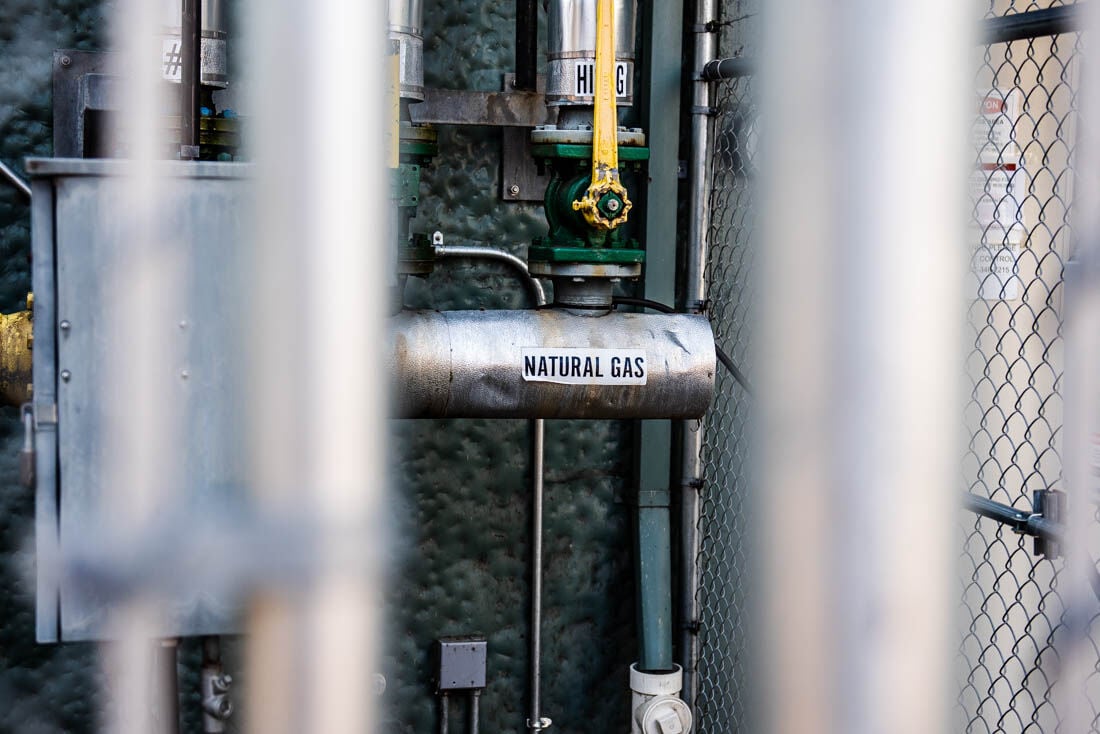 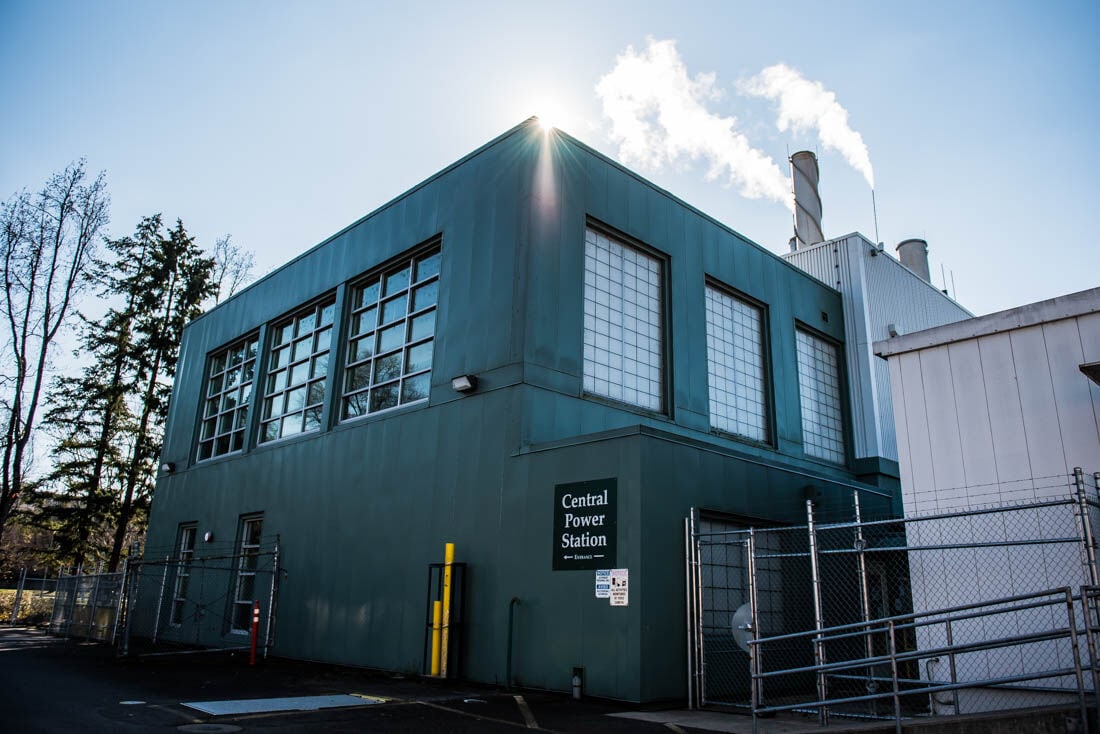 The Utilities and Energy Department is responsible for all aspects of operations, maintenance and repairs of the campus utility systems. The UO Central Power Station is responsible for providing energy to the University of Oregon. (Ian Enger/Emerald) 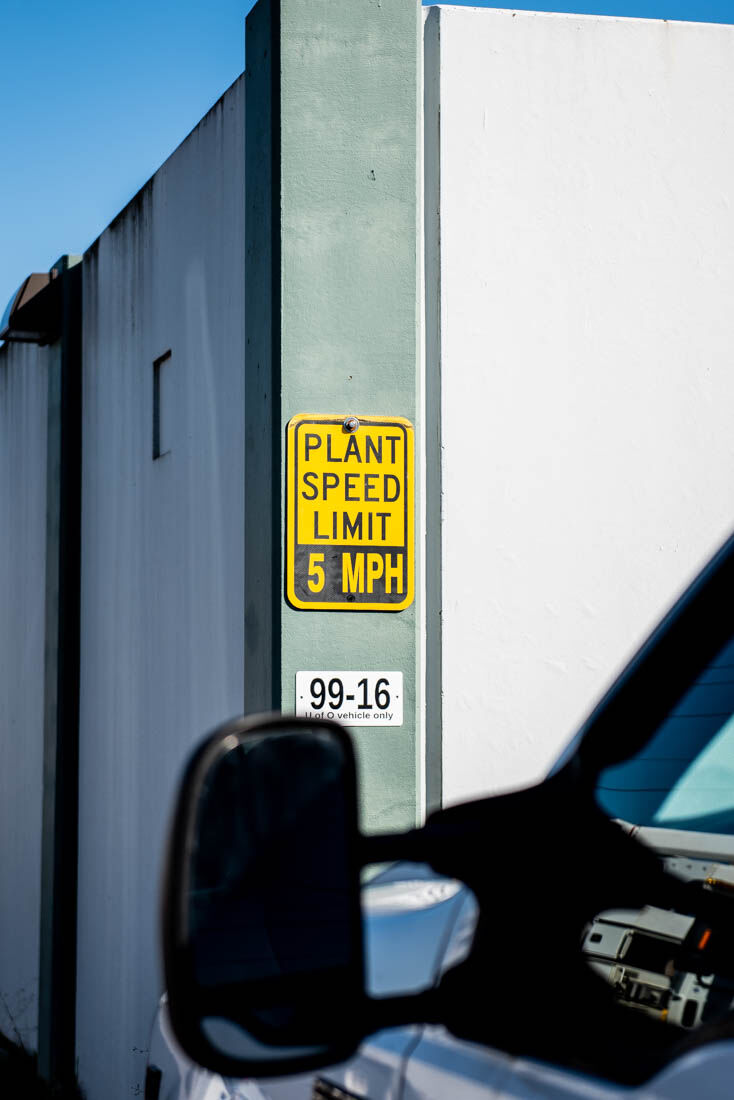 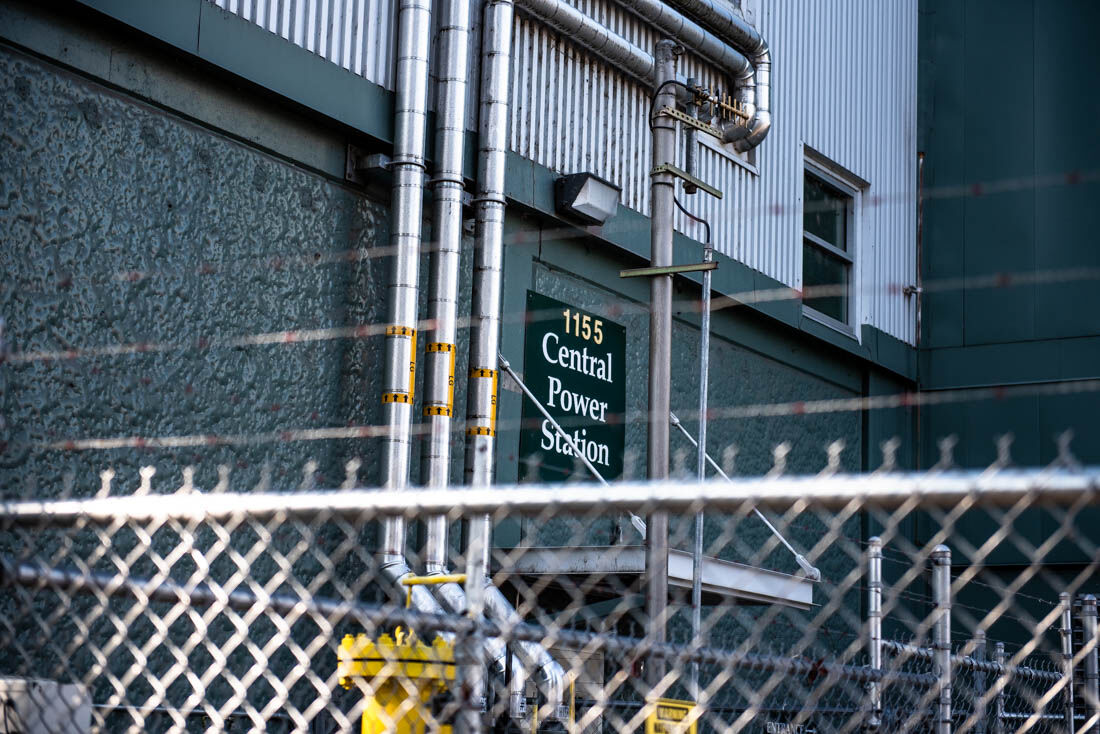 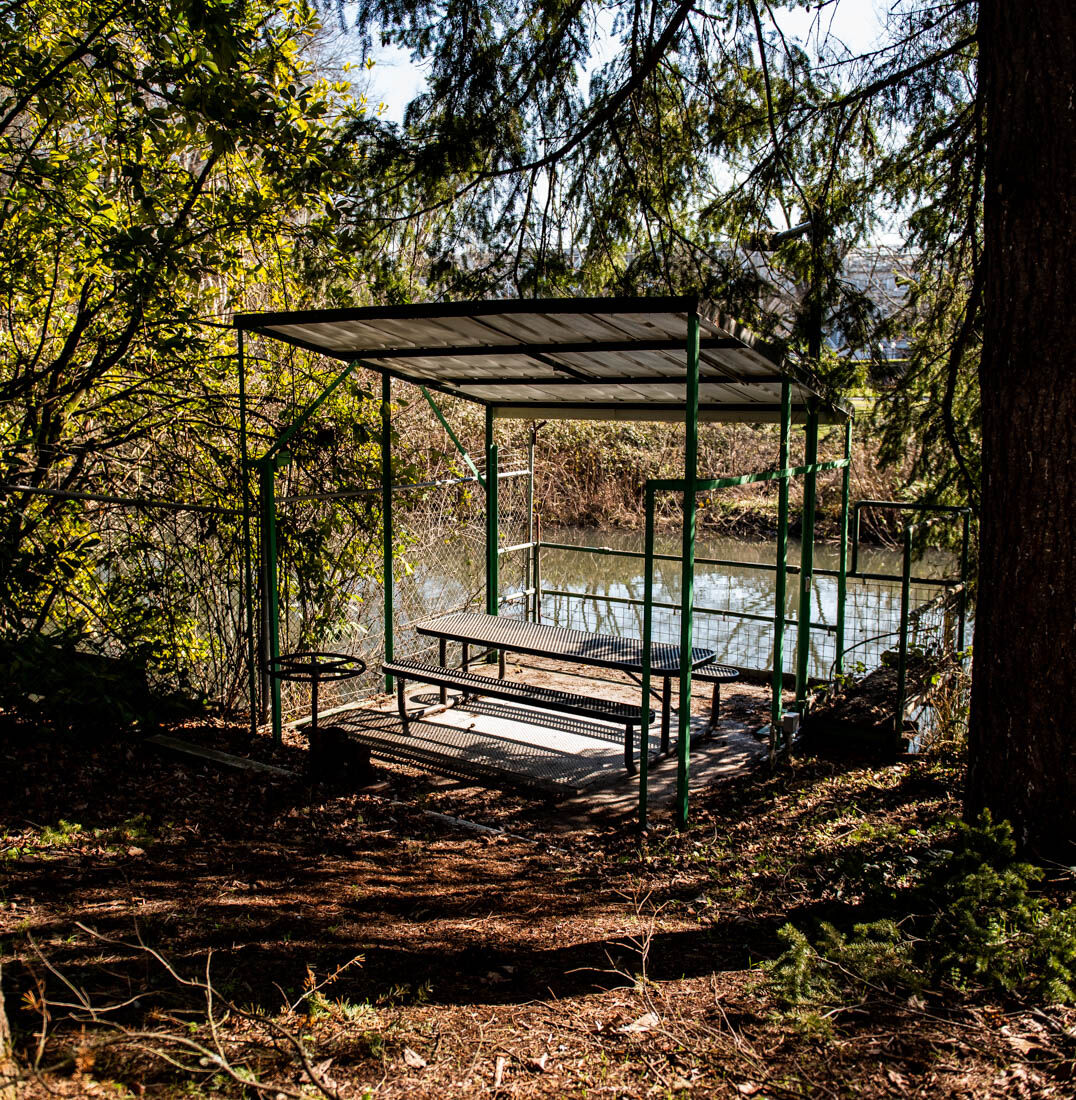 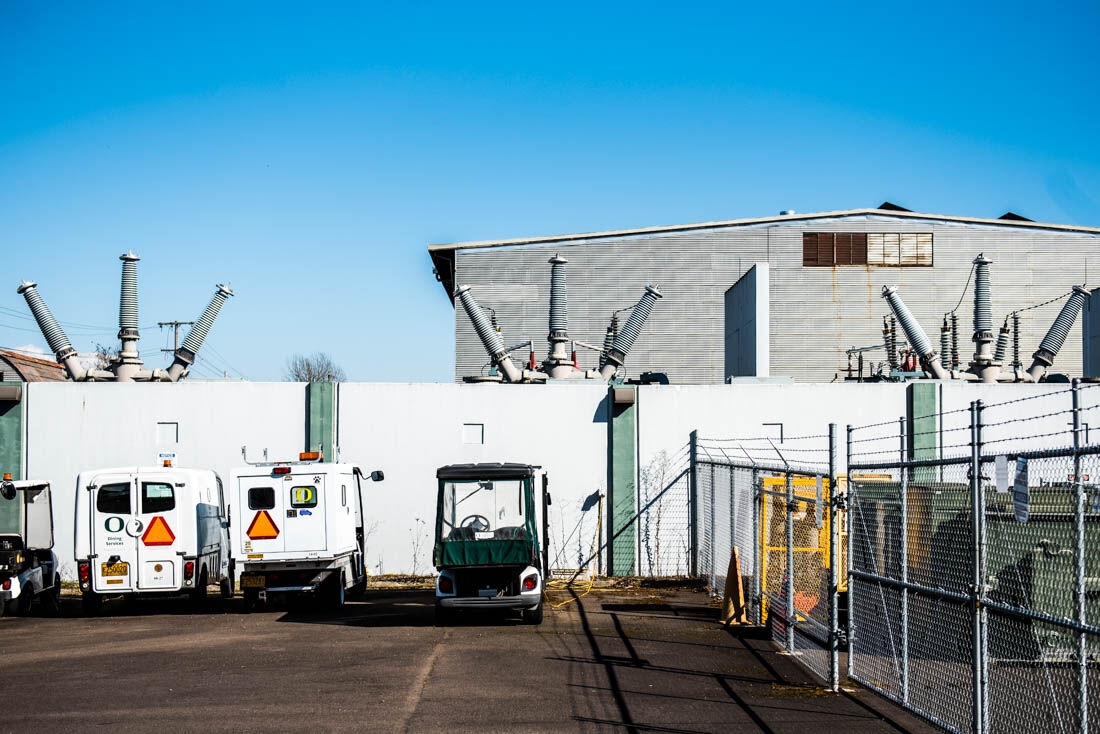 The Utilities and Energy Department works with multiple campus partners to ensure effective and safe operations. The UO Central Power Station is responsible for providing energy to the University of Oregon. (Ian Enger/Emerald) 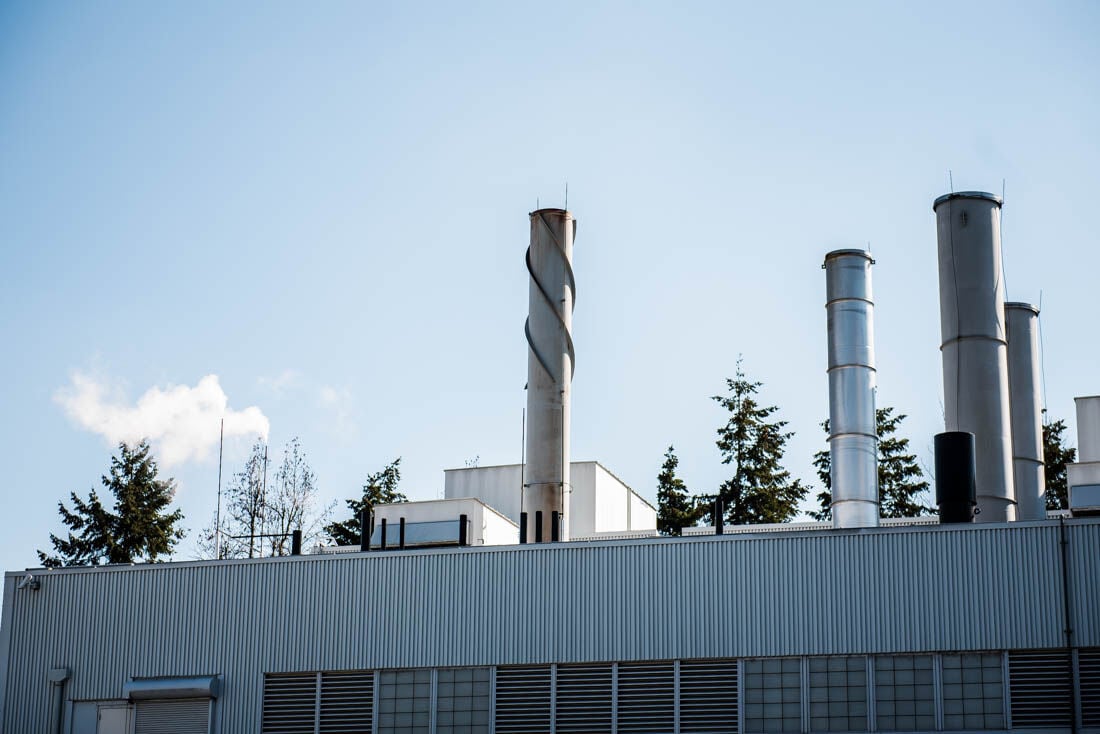 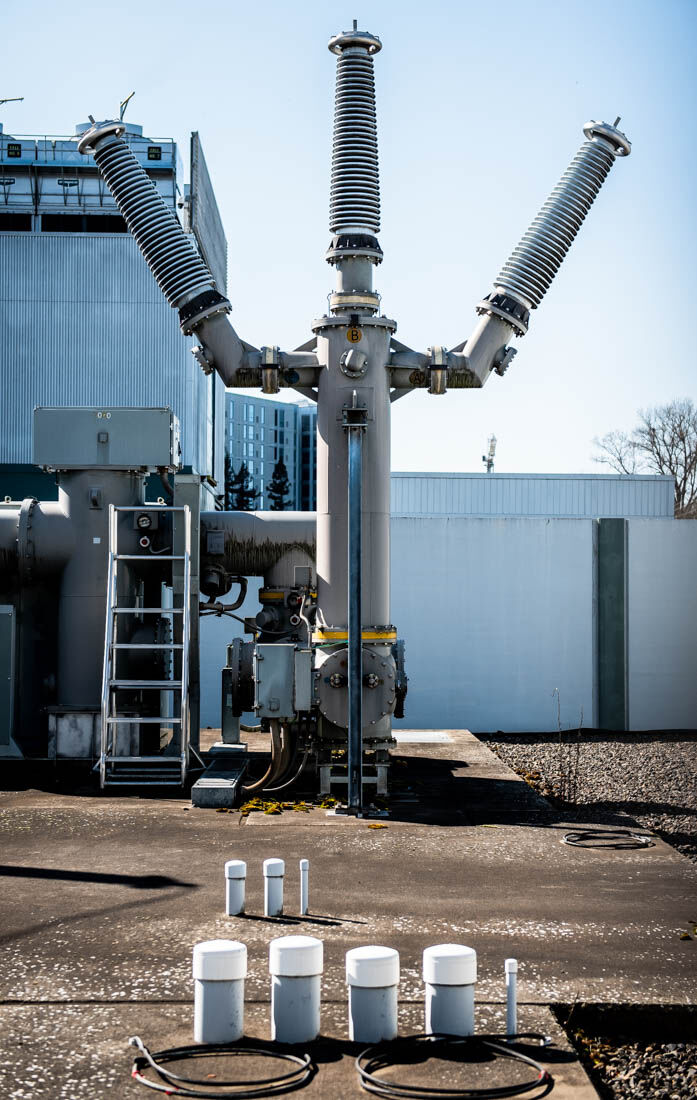 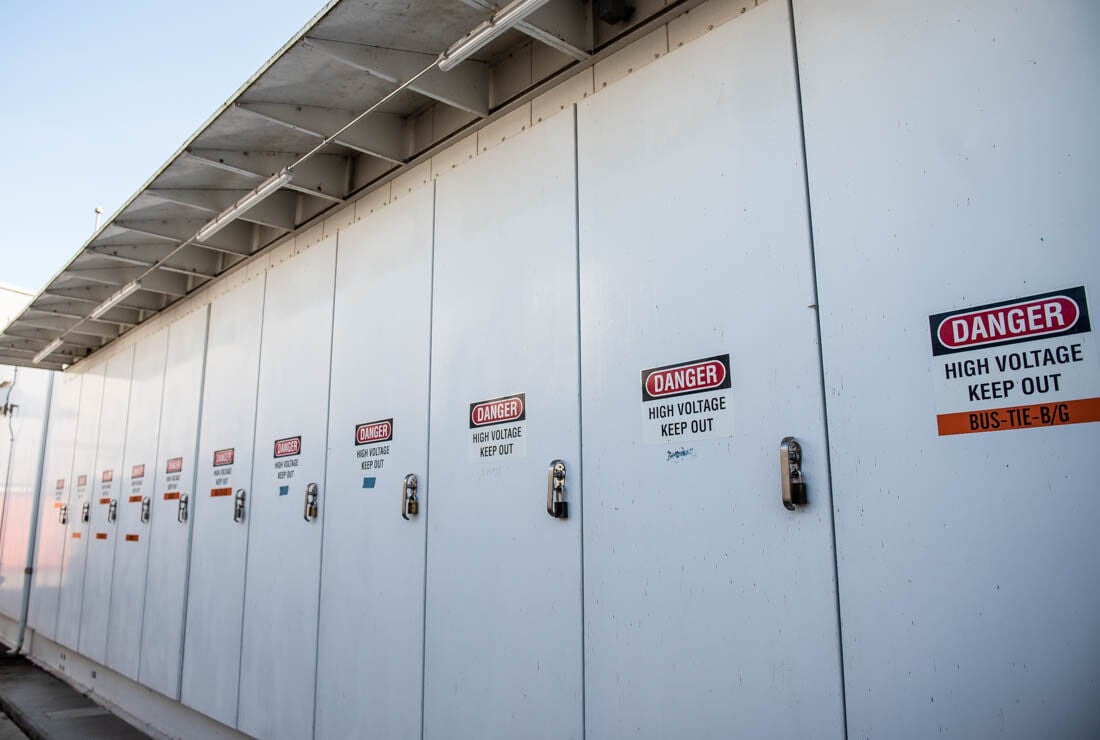 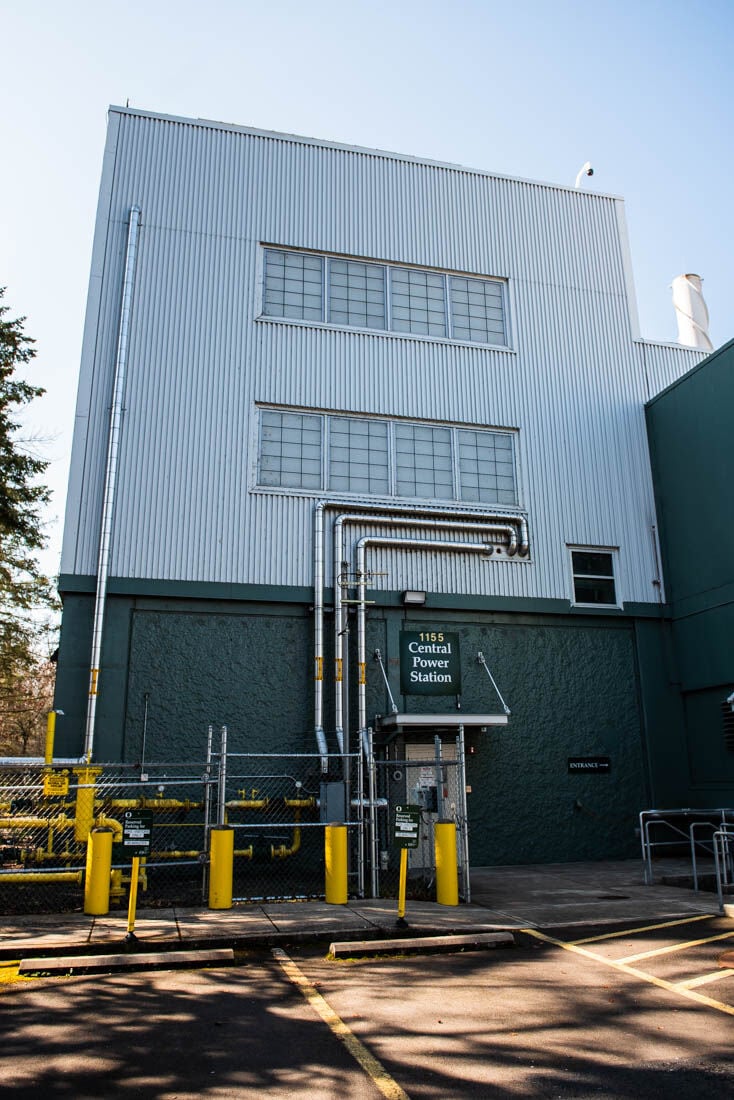 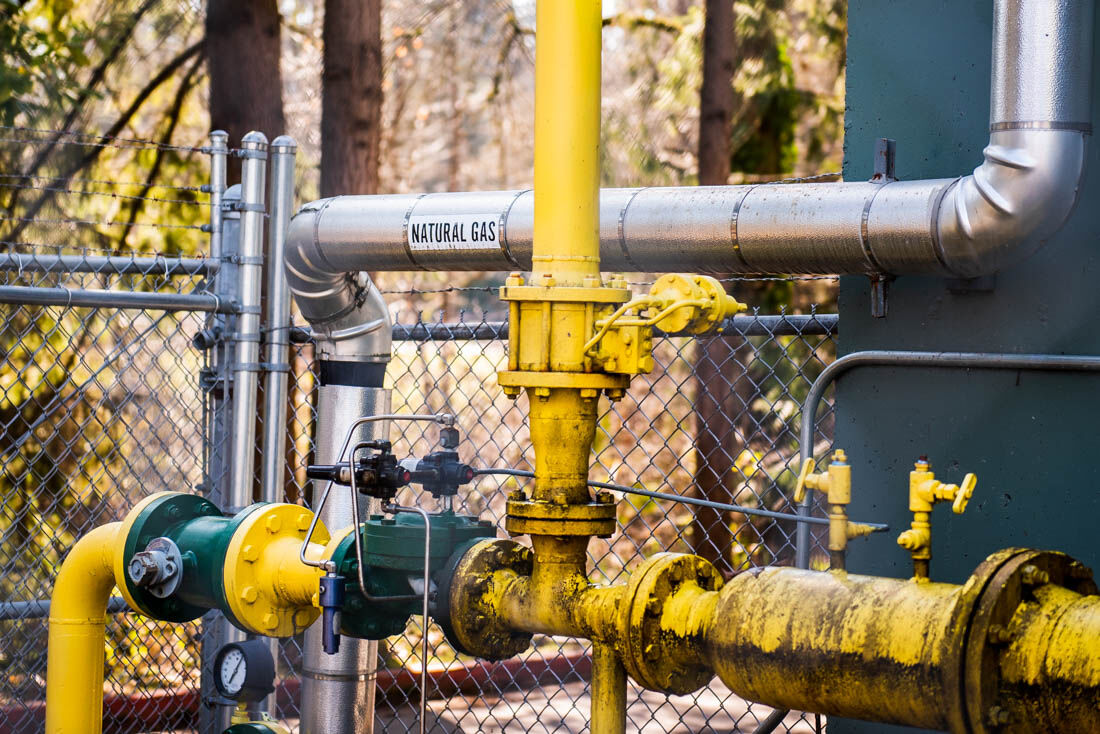 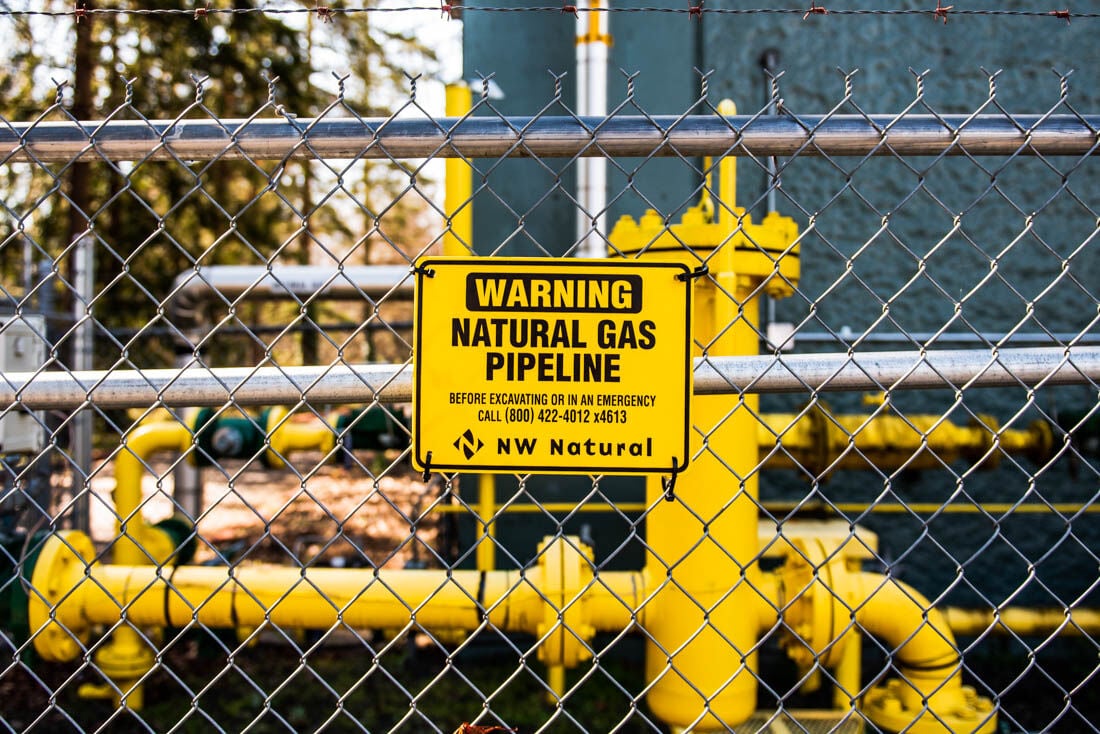 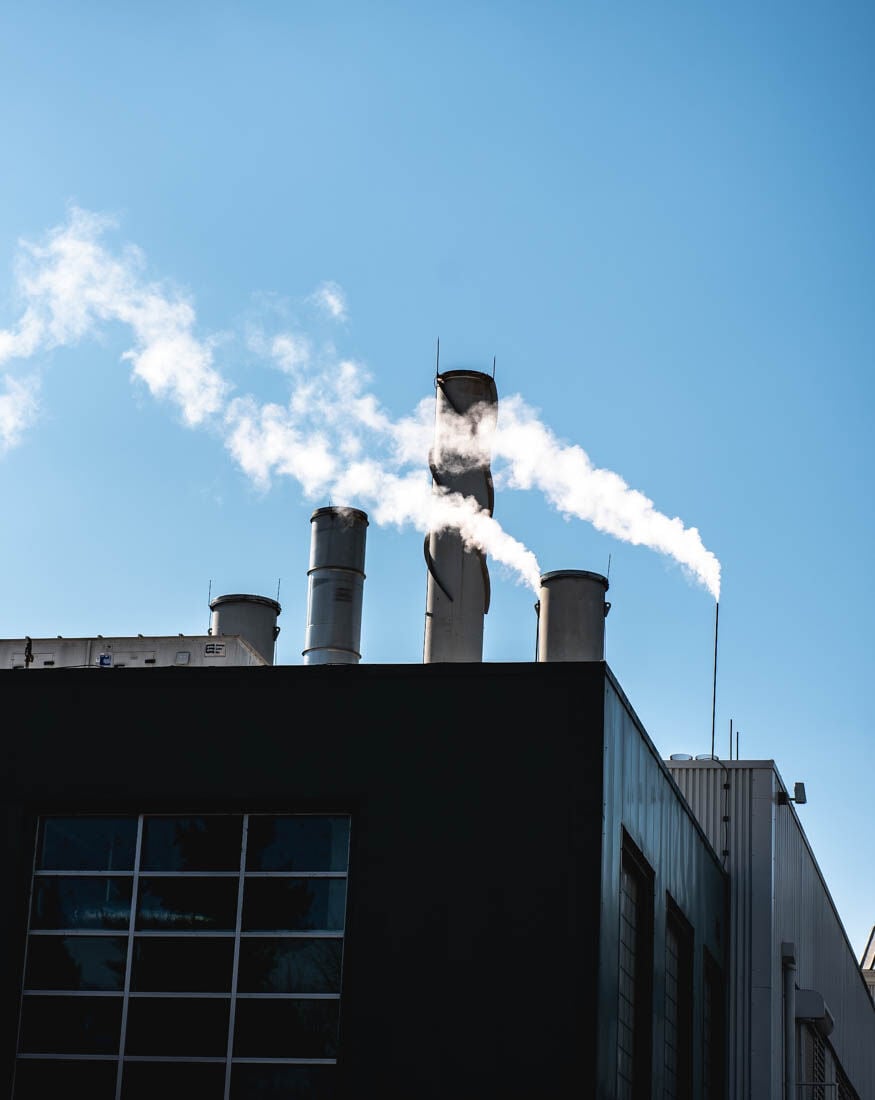 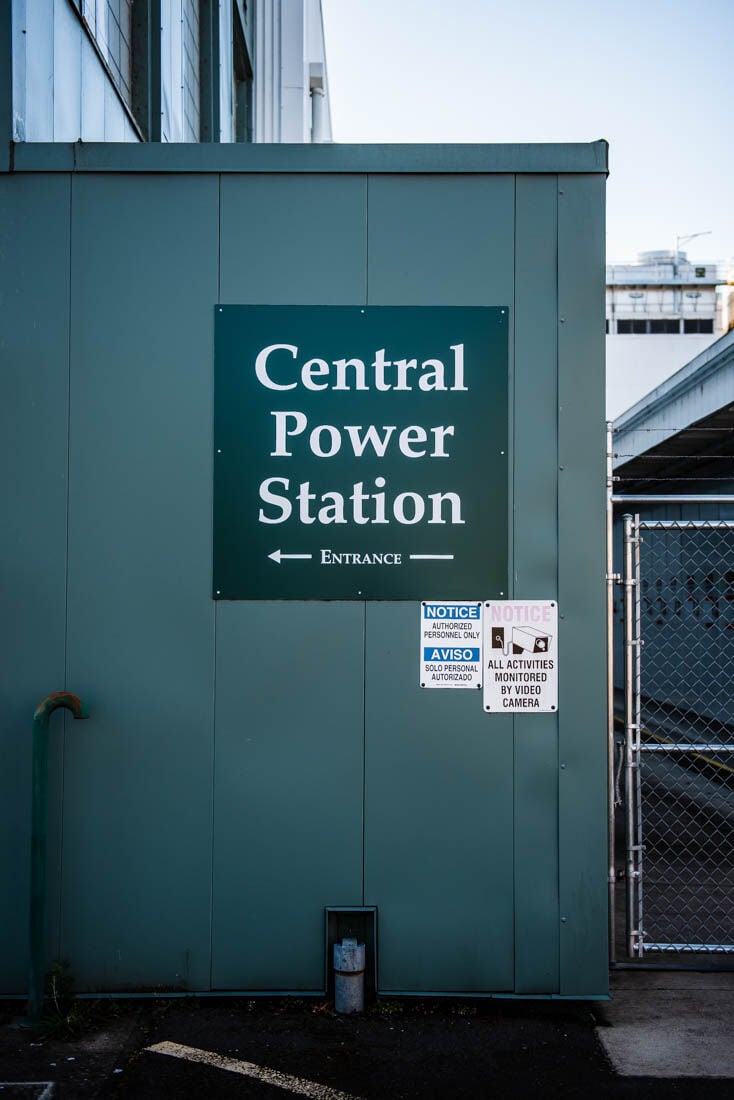 The Utilities and Energy Department works with multiple campus partners to ensure effective and safe operations. The UO Central Power Station is responsible for providing energy to the University of Oregon. (Ian Enger/Emerald)

Eugene City Council members failed to come to an agreement with Northwest Natural — a natural gas utility company servicing the Pacific Northwest — on the terms of their contract renewal, which is now set to expire in May.

The franchise agreement would have locked the city into another 10-year contract with the gas company, allowing NW Natural to expand its gas infrastructure throughout the city without restriction. The reevaluation of natural gas use in Eugene has brought up similar questions about the University of Oregon’s gas use from students and environmental activists.

In July 2019, the Eugene Sustainability Commission presented a series of policy recommendations meant to be included in the contract with NW Natural in order to reduce gas use. The recommendations include limiting or prohibiting new natural gas infrastructure, requiring NW Natural to incentivize customers’ reduced use of natural gas and prohibiting financial incentives for purchasing natural gas appliances. NW Natural refused to agree to these conditions, prompting another six-month extension of the current agreement.

The City of Eugene’s franchise agreement with NW Natural, which was first negotiated in 1999, gives the company legal authority to expand its infrastructure, as well as build and operate pipelines under the city’s streets and other public areas. It also allows the city government to impose fees on the company based on its revenue from customers within the city’s boundaries.

At a virtual public forum and work session on Feb. 8, the Eugene City Council and residents discussed the NW Natural contract at length. Many residents spoke out against NW Natural, including those who support the campaign Fossil Free Eugene, a coalition of over 30 organizations — including the UO Climate Justice League and Cascadia Action Network — working to divest the city from the fossil fuel industry.

“It seems clear to me that we need to find a different way to reach the goals that we have articulated,” Councilor Jennifer Yeh said. “Let’s not kid ourselves, natural gas is a fossil fuel; it’s harmful.”

Natural gas is a fossil fuel energy source made primarily from methane and is formed deep beneath the earth’s surface. It is primarily used for heating, gas stoves and generating electricity. While it emits fewer carbon emissions than other fossil fuels like coal and petroleum, it still releases a large amount of carbon into the atmosphere, contributing to the negative effects of climate change.

The city’s terms for the new franchise agreement with NW Natural are largely based on its mission to reduce city-wide carbon emissions in accordance with the Climate Recovery Ordinance goals outlined in the Eugene Climate Action Plan.

One of the main goals is for all businesses, individuals and others working in the city to reduce the total use of fossil fuels by 50% by 2030 compared to 2010. The other main goal is for total community greenhouse gas emissions to be reduced to no more than 350 parts per million — 350 particles of carbon dioxide in one million particles of air — by 2100, which in 2016 was estimated to require an average annual emission reduction of 7.6%. If NW Natural agrees to the city’s terms, then the gas company will have to pay the city a higher percentage of its gross revenues than it currently does.

The city also proposed an additional Carbon Reduction Fee based on its Climate Recovery Ordinance to decrease Eugene’s overall carbon emissions. When NW Natural refused to meet these terms, city officials decided it was not the time to settle on this version of the contract.

“I don’t want to be a model to show how a city is held hostage to a franchise agreement that doesn’t serve our higher goals,” Eugene Mayor Lucy Vinis said at the public forum. “It is an important moment to stand really clearly for what we see as our legacy work going forward.”

UO uses the majority of its natural gas input as fuel to heat the campus, according to Paul Langley, UO utilities and energy operations and maintenance superintendent. The university purchases natural gas several years in advance from a wholesaler, which is then delivered to campus via an underground gas line owned and operated by NW Natural.

The university is heated by a district heating system, which heats water with the combustion of natural gas to produce steam. The steam is created at the UO Central Power Station and then distributed to buildings throughout campus through a network of tunnels. District heating is standard for college campuses, Langley said, though the method can suffer from inefficiency. Between 30 and 40% of the natural gas input is lost in the steam system due to tunnel leaks and heat loss in the winter.

“Because the tunnels are underground, if you have a pipe that’s uninsulated in a cold tunnel, you’re going to basically be heating the tunnel instead of heating the building,” Langley said.

To address the problem, the Utilities and Energy Department is working to re-insulate the tunnels to improve the steam system’s overall efficiency. The project, outlined in the university’s Climate Action Plan, is about 95% complete and expected to be fully completed after UO resumes normal in-person operations.

Langley said while the university does not buy gas directly from NW Natural, the company charges a delivery fee that’s factored into UO’s gas bill.

During the 2019 fiscal year, UO spent about $2.3 million on natural gas. Langley said anything the city does to limit the expansion of natural gas infrastructure will not affect UO because the university’s gas infrastructure is already established. UO Sustainability Director Steve Mital said if NW Natural agrees to the city’s terms, it’s unlikely that the proposal to increase fees on the gas company will apply to the university’s pre-purchased gas.

“However, we do anticipate carbon fees being assessed on the natural gas we purchase at some point in the future,” he said in an email. “If the city doesn’t adopt its current proposal, the state of Oregon will likely adopt its own statewide version at a later date. We therefore anticipate that our natural gas costs will rise accordingly.”

In accordance with the UO Climate Action Plan, the university is working on a study to identify alternative ways to heat campus without the use of natural gas, Mital said. The study is scheduled for completion in June.

UO’s Climate Action Plan was first established in 2010 before the City of Eugene’s. Every five years, UO reassesses and recommits to the plan, moving toward the ultimate goal of carbon neutrality. While the university does not have a set date for when it expects to achieve this goal, each iteration of the plan initiates a new set of studies meant to determine a realistic timeframe to reach carbon neutrality, Mital said.

He defined carbon neutrality as the point when either total greenhouse gas emissions equals zero, or when the amount of carbon emitted into the atmosphere equals the amount removed from the atmosphere.

Co-Director of UO Climate Justice League Courtney Kaltenbach said she believes UO and Eugene need to divest in all fossil fuels and focus on a clean energy transition.

“I think that what the UO does is very similar to the City of Eugene more broadly, which is a big campaign of greenwashing, where they like to appear that they're sustainable, but aren't actually accountable to like climate goals,” Kaltenbach said.

The group’s members have started testifying at city council meetings, explaining to councilors why the group wants to see Eugene more energy focused. Kaltenbach said it’s important for students to testify because the university has a large impact on the community.

“I think what's so important about this push to end the contract with Northwest Natural Gas is that natural gas impacts low income, poor communities and People of Color disproportionately,” she said. “So it's really important that we are aware of this environmental injustice and racism that's occurring in the town that we're living in.”

Abbey Gravatt, Student Sustainability Network chair, met with engineers and analysts in October 2020 to discuss how to improve UO’s thermal systems on campus. Buildings are typically heated with natural gas, and student activists are seeking a way to heat them with electric steam boilers to reduce greenhouse gas emissions.

Gravatt said each solution the group proposed is categorized as having a low, medium or high impact on the university’s greenhouse reduction goals. Once each option has been laid out, the engineers, analysts and SSN choose which ones to focus on by finding the right balance between highest impact and cost feasibility.

“It’s a lot of moving parts,” Gravatt said. “I don't think folks understand how long-term these projects are, especially when we're focusing on something that's infrastructure-based. So the time period on this is like, 20, 30 years until it's completely finished.”

Gravatt leads a campaign for the Climate Justice League that is focused on the UO foundation’s divestment from fossil fuels. The foundation, which funds student scholarships, academic programs and building improvements, has said it is committed to divesting from fossil fuels, but Gravatt now wants to figure out a way to bind them to that decision long-term.

“We're working on getting transparency on those investments, because there's a true lack of transparency from that foundation, so we want to be able to always know what they're investing in,” Gravatt said. “We don't want the university getting money from a foundation that's putting their money in bad places.”