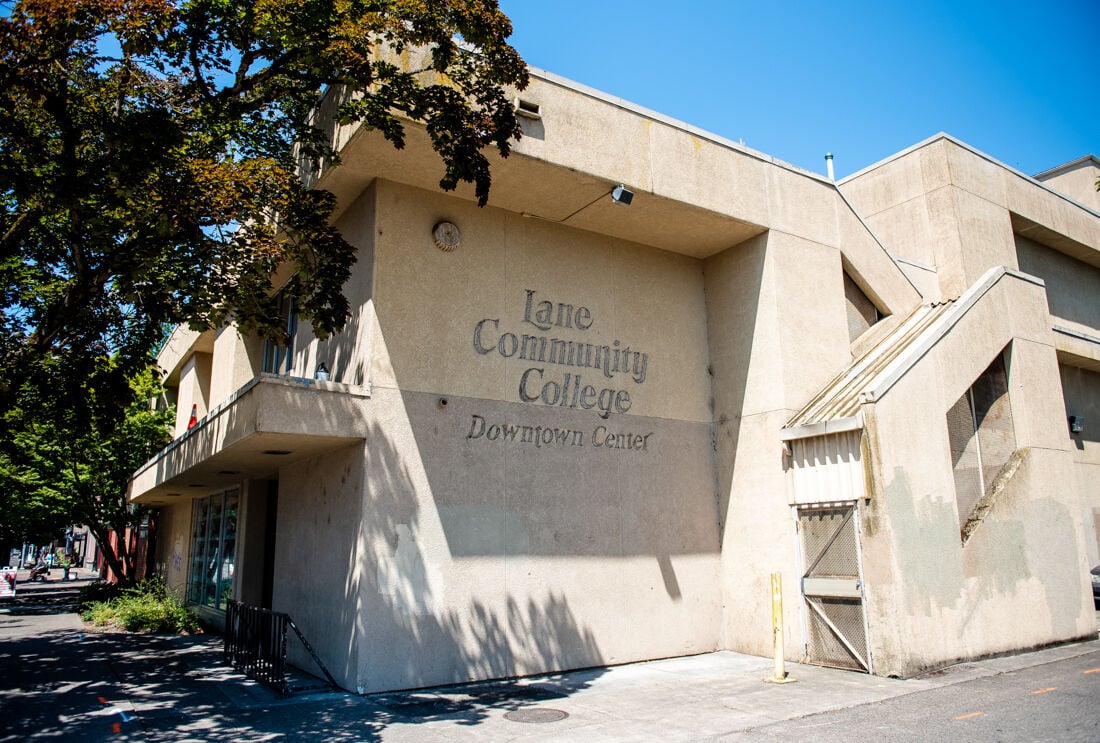 A Lane Community College building in downtown Eugene, located on 1059 Willamette street, is in the process of being converted into mixed-income housing called the Montgomery. The city of Eugene has approved plans to convert several buildings into affordable housing options. (Ian Enger/Emerald) 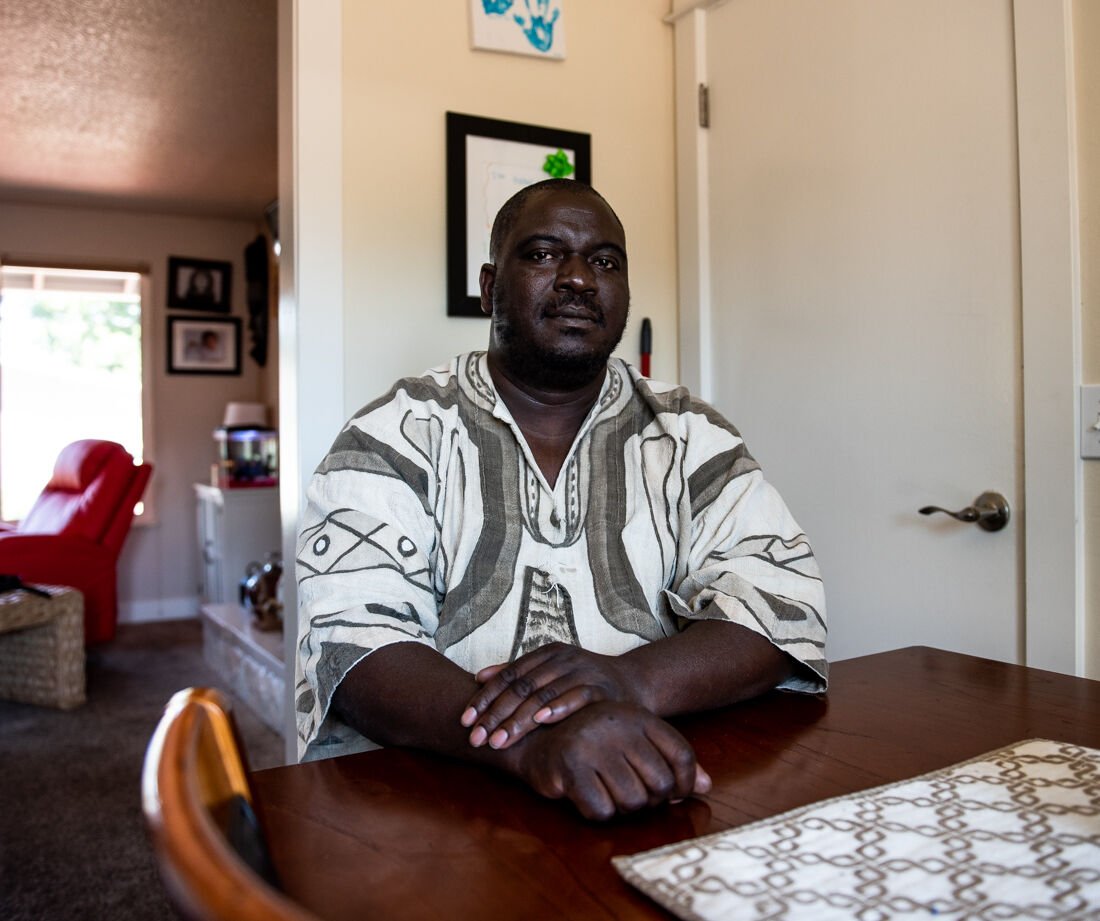 Ibrahim Coulibaly is the CEO of Human Rights, Human Stories, a non-governmental organization which sent a setter to Eugene City Council expressing their concerns and opposition to the creation of the housing apartment complex at 11th and Charnelton. The city of Eugene has approved plans to convert several buildings into affordable housing options. (Ian Enger/Emerald) 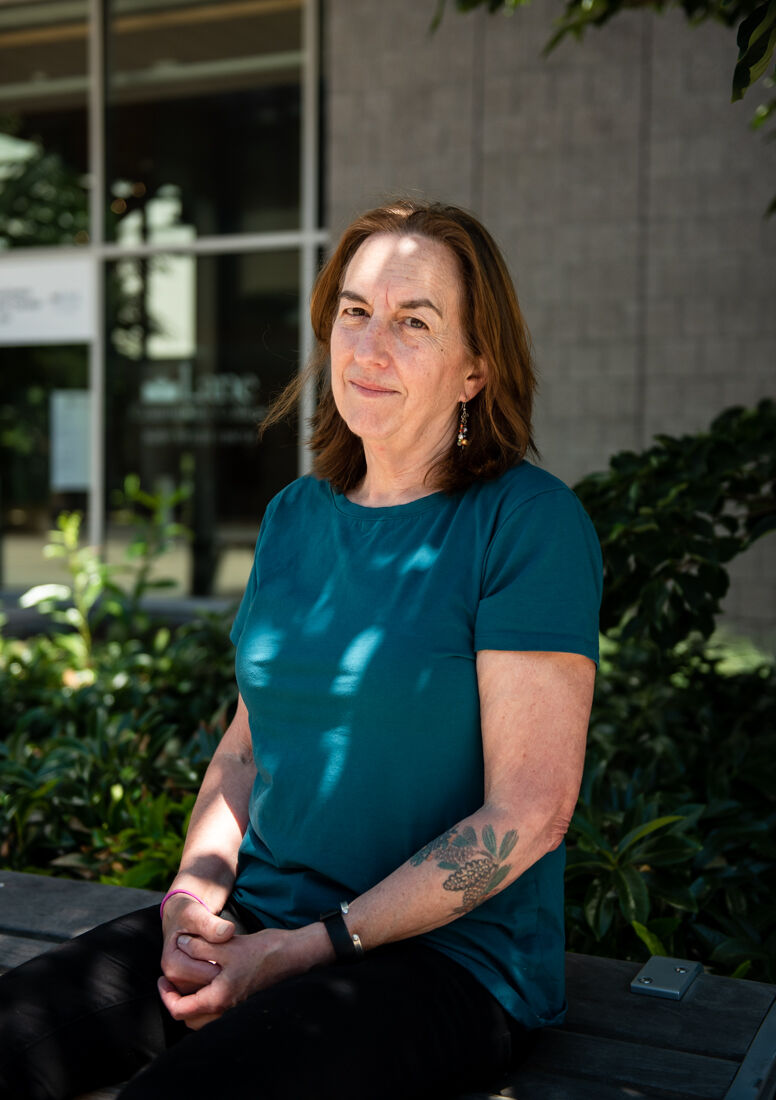 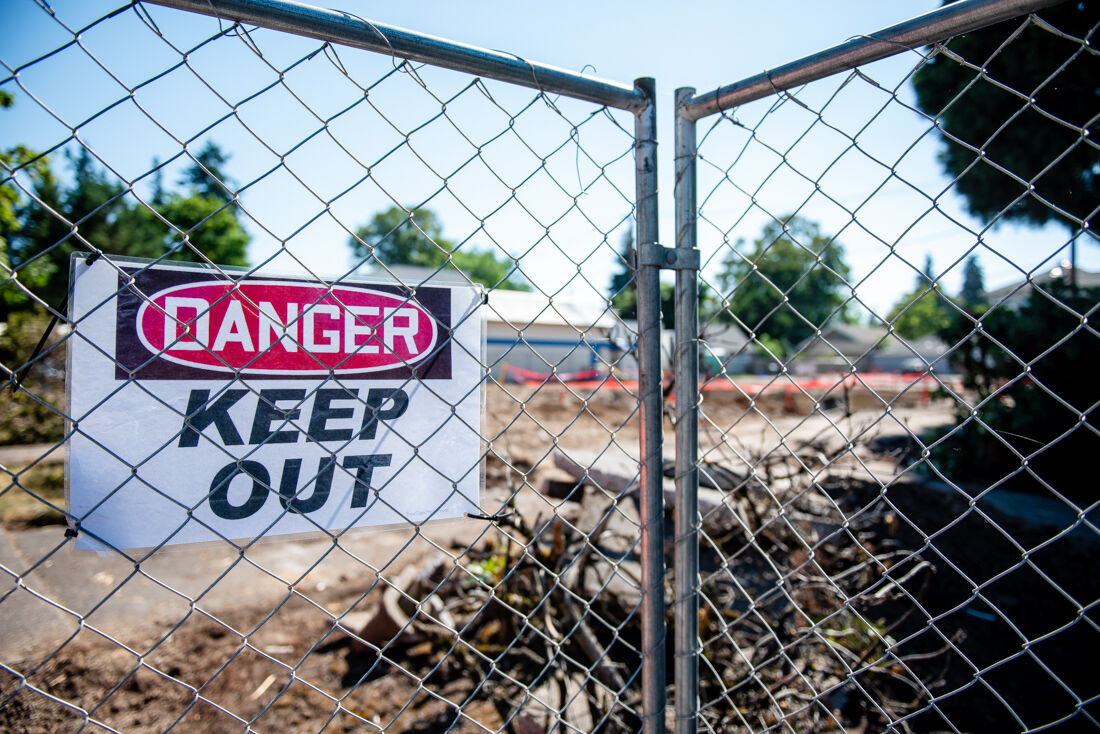 The previous building at 1100 Charnelton street in Eugene was torn down the last week of June 2021 to begin the construction of the permanent supportive housing apartment community Home for Good, Lane County’s housing authority, has planned. The city of Eugene has approved plans to convert several buildings into affordable housing options. (Ian Enger/Emerald)

A Lane Community College building in downtown Eugene, located on 1059 Willamette street, is in the process of being converted into mixed-income housing called the Montgomery. The city of Eugene has approved plans to convert several buildings into affordable housing options. (Ian Enger/Emerald)

Ibrahim Coulibaly is the CEO of Human Rights, Human Stories, a non-governmental organization which sent a setter to Eugene City Council expressing their concerns and opposition to the creation of the housing apartment complex at 11th and Charnelton. The city of Eugene has approved plans to convert several buildings into affordable housing options. (Ian Enger/Emerald)

The previous building at 1100 Charnelton street in Eugene was torn down the last week of June 2021 to begin the construction of the permanent supportive housing apartment community Home for Good, Lane County’s housing authority, has planned. The city of Eugene has approved plans to convert several buildings into affordable housing options. (Ian Enger/Emerald)

In the wake of numerous municipal zoning code changes and an influx of state funding, several ambitious affordable housing initiatives recently kicked off in Eugene. The projects aim to cater to Eugene’s diverse housing needs, but not everyone agrees on whose needs should be prioritized.

Eugene faces a housing crisis of its own due to a combination of expensive housing and low wages in comparison to state averages, UO architecture and urban design instructor and Better Housing Together founding director Kaarin Knudson said.

According to a report by the National Low Income Housing Commission, a minimum wage worker in Eugene must work 57 hours per week to afford a one bedroom apartment. As of 2020, 1,606 people are homeless in Lane County, according to Lane County’s Point-in-Time report.

Knudson said a lack of middle housing, like duplexes and cottage clusters, also contributes to the crisis.

The local projects come just before stark changes to zoning codes across the state, allowing for more middle housing.

The Oregon legislature passed SB 8 on June 23, which requires municipal governments to allow affordable housing in lands not zoned for residential use.

Knudson said Eugene’s community is more diverse than its zoning code allows for. “Our housing needs to be equally diverse,” she said.

The Eugene City Council voted 6-1 to begin a project that will turn a Lane Community College building downtown into mixed income housing called the Montgomery at its June 9 meeting.

The city will begin negotiations with a private development team to sell the building, which sat vacant for almost a decade, according to the project’s website.

There are few opportunities for residents with moderate incomes to find housing, according to the city’s website. The city said the Montgomery will provide easy access to downtown and the transit network.

The City Council approved using the federal Community Development Block Grant to buy the site on Jan. 29, 2020. The grant requires that 51% of the housing units are affordable to households earning 80% of the area’s median income (AMI), according to the city’s website.

The city originally asked for the units to be priced based on HUD Fair Market Rents — a method of determining affordable rental rates for local housing markets.

According to the city’s proposal, a studio apartment would be rented at $773 a month based on these standards. However, the development team’s proposal said it would need an additional $2 million from the city in order to achieve returns required to secure equity.

In turn, the development team’s proposal said 51% of the units will be designated for those earning 80% AMI. This would eliminate the $2 million deficit but raise rents, making a studio apartment $894 a month.

In response to the proposal, 27 community organizations and eight prominent members of BIPOC communities in Eugene submitted a letter to the city council. The letter asked councilors to reconsider the project, citing equity concerns around giving “publicly held real property to a for profit corporation controlled by White, cis men.”

Instead, the community leaders asked the city to allocate 90% of its Community Safety Initiative funds — which support various services including the Eugene Police Department — to housing. The letter asked the city to use the property to support the development of a community land trust: a nonprofit that would serve as the steward of affordable housing.

“You can’t convince me that a studio in Eugene for $894 a month is affordable,” Ibrahim Coulibaly, CEO of the nonprofit Human Rights, Human Stories, said. His organization helped submit the letter.

Coulibaly said he thinks the city is throwing public money away by giving the building to a private development team.

“You cannot buy the building from LCC to give it to someone for those people to make money,” Coulibaly said. “You’re not solving any problems the community has.”

Councilor Emily Semple was the only city councilor who voted to halt the project. She said it was a hard choice because she supports the project, but wants to consider the concerns of the community before moving forward.

Semple said she recognizes the letter's concerns about giving public land to a private development team.

“Half of this stuff is going to be market rate, which means they’ll make bank on it,” she said, “and the other half isn’t all that cheap.”

She said giving publicly owned land to a private development team poses equity issues and that public money should be used to help marginalized people.

Still, Semple said the project provides desperately needed housing downtown. “If we turn this project down, we will have that empty building for even longer,” she said.

“We are absolutely pro-housing solutions,” she said, speaking about her work with Better Housing Together, “and that is a great new housing solution in our community.”

A new kind of affordable housing

According to its website, the organization plans to build the Peace Village Co-op, a village full of affordable houses in Eugene, next. The village will be a limited equity co-op and community land trust, meaning residents share ownership and contribute hours to maintaining the village.

The Peace Village Co-op will consist of 64 units on land previously owned by Peace Presbyterian Church. The village will be targeted to those with extremely low incomes of 30-50% AMI, according to SquareOne’s website.

Knudson, whose organization partners within SquareOne, said the villages have many advantages because Eugene needs smaller options than traditional, single family homes to accommodate smaller households.

Andrew Heben, project director for SquareOne, said the group recently learned that it will receive $750,000 for Peace Village from the American Rescue Plan Act local community investments and $2 million from the Oregon Housing and Community Services for various projects. Dellinger said she thinks these types of developments are going to be much easier and more common after HB 2001 is implemented.

Homes for Good, Lane County’s housing authority, is developing a new, 45 unit supportive housing apartment community in Eugene for individuals experiencing homelessness. The site is called “the Nel at 11th and Charnelton Street.”

The Nel will provide on-site case management and supportive services — including assistance with independent living skills, money management and connections to employment and educational services.

Coulibaly said he thinks the Nel is a great project because it’s a “one-stop-shop” approach to help Eugene’s homeless population. Knudson said the Nel is an exciting project and a great complement to Eugene’s diversity of housing needs.

According to the proposal, Homes for Good received funding from OHCS for low income tax credits in July of 2020, which helped fund the project.

The leases will be given to people from Lane County’s Coordinated Entry Central Wait List, which ranks those who need housing with need-based criteria, the Homes for Good website said.

Construction began in May, according to the project’s proposal.

The project’s website said Homes for Good hopes to start moving residents in by the summer of 2022.

“My rent is $625 a month, which I, at first, thought was affordable,” UO senior Haylee Frame said. “But what I didn’t account for was the cost of groceries and general living expenses.”

Frame works as a student employee at UO. She makes $12.75 per hour, but UO guidelines limit her to a 25-hour work week. She said her job is “nice for balancing school and work,” but that it’s not a large amount of money.

UO is growing programs that provide assistance to students in an immediate crisis, according to Dr. Jimmy Howard, assistant dean of students for prevention and response. These include the Students in Crisis Fund, which students can apply for through the Office of the Dean of Students, and a developing emergency housing network.

Knudson said she encourages students to advocate for their affordable housing needs.

“It is important that our student body be engaged in conversations about our housing needs,” she said, “because there are so many students negatively impacted by the absence of efficient and alternative housing.”

Editor's note: This story previously incorrectly stated that the Peace Village Co-op will consist of 32 units, rather than 64. The article's text has been revised to reflect this error.