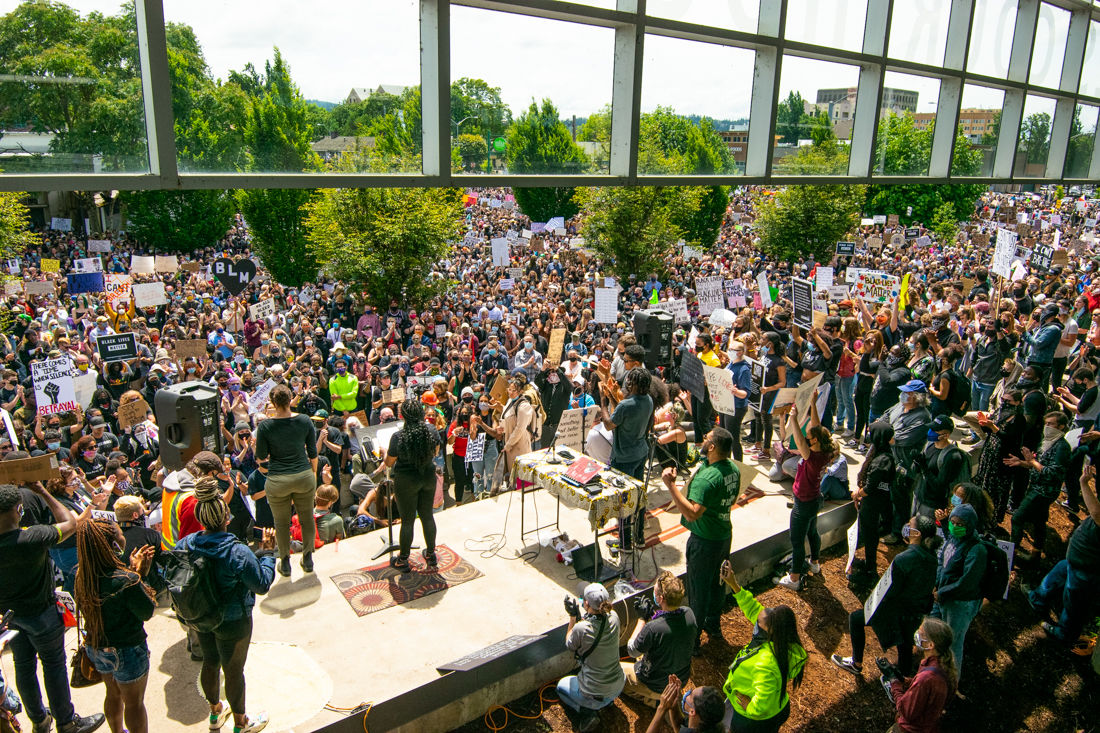 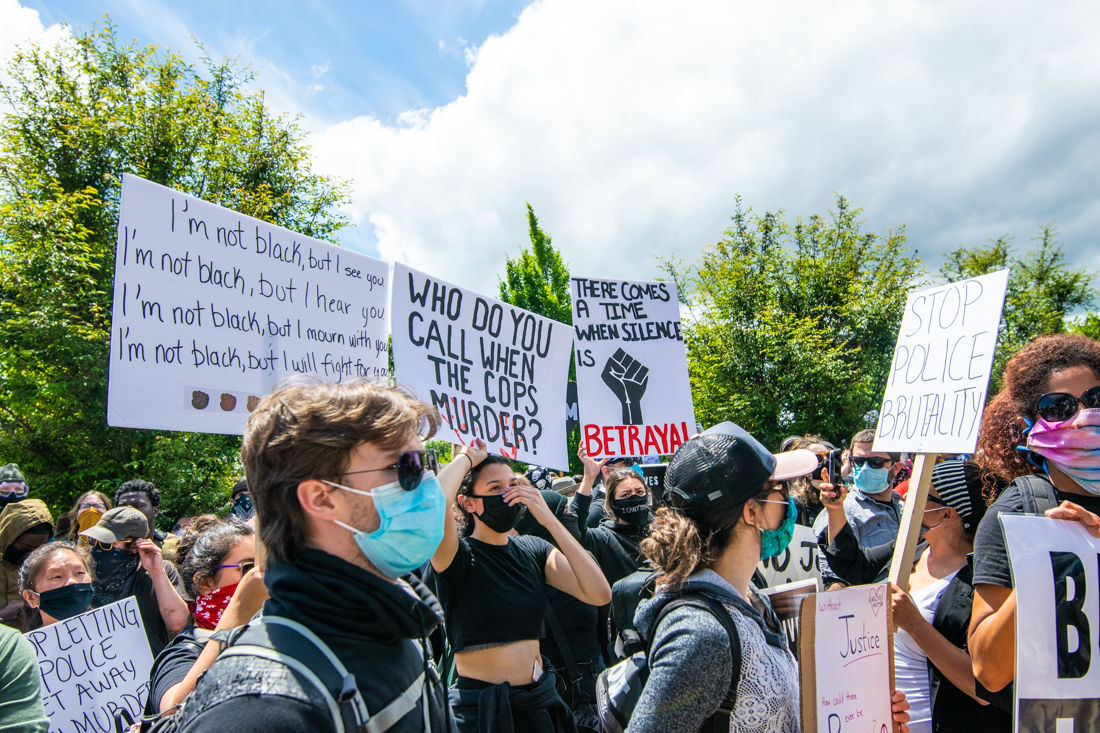 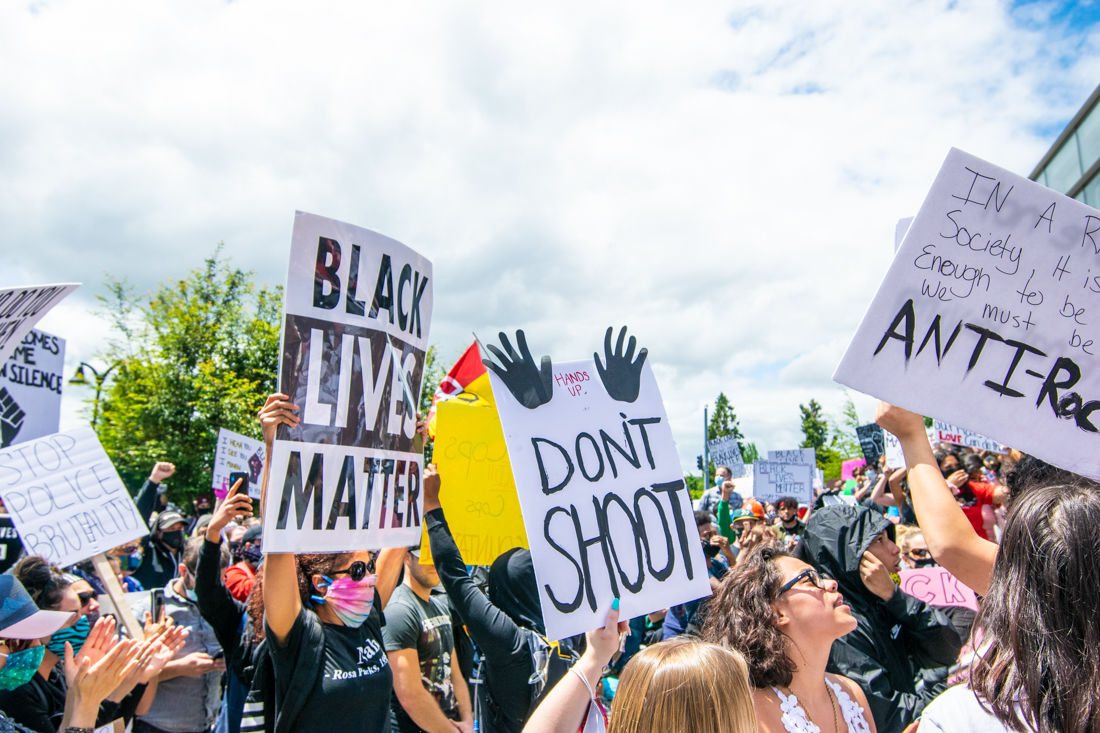 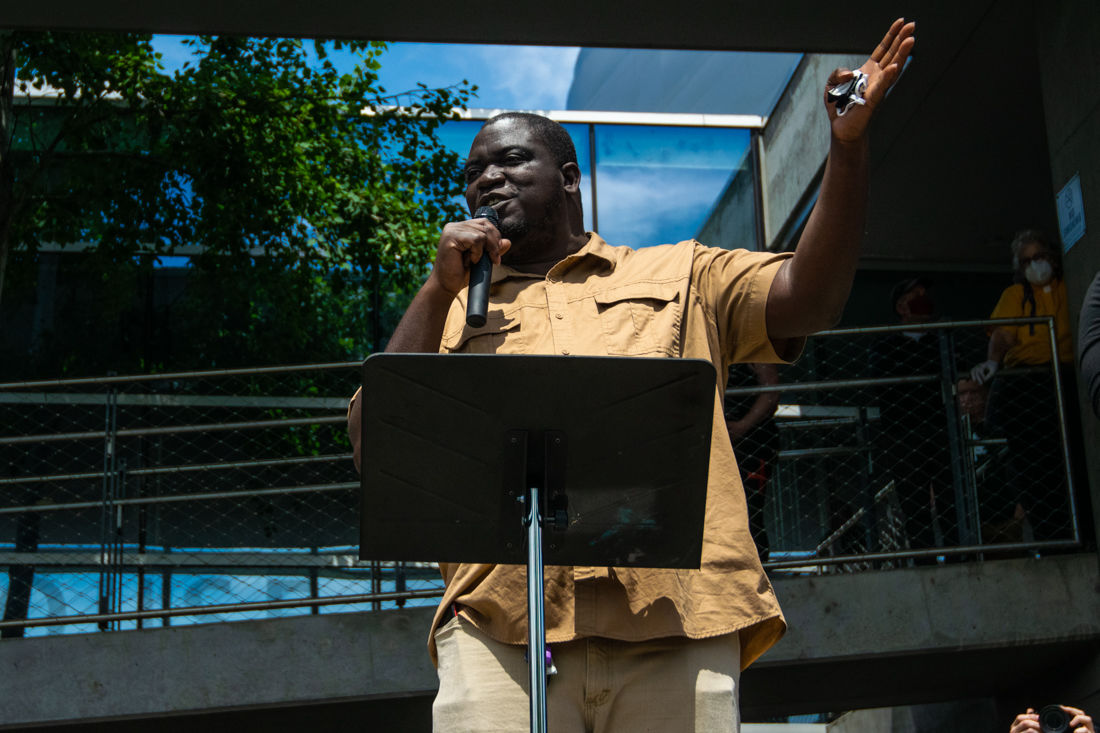 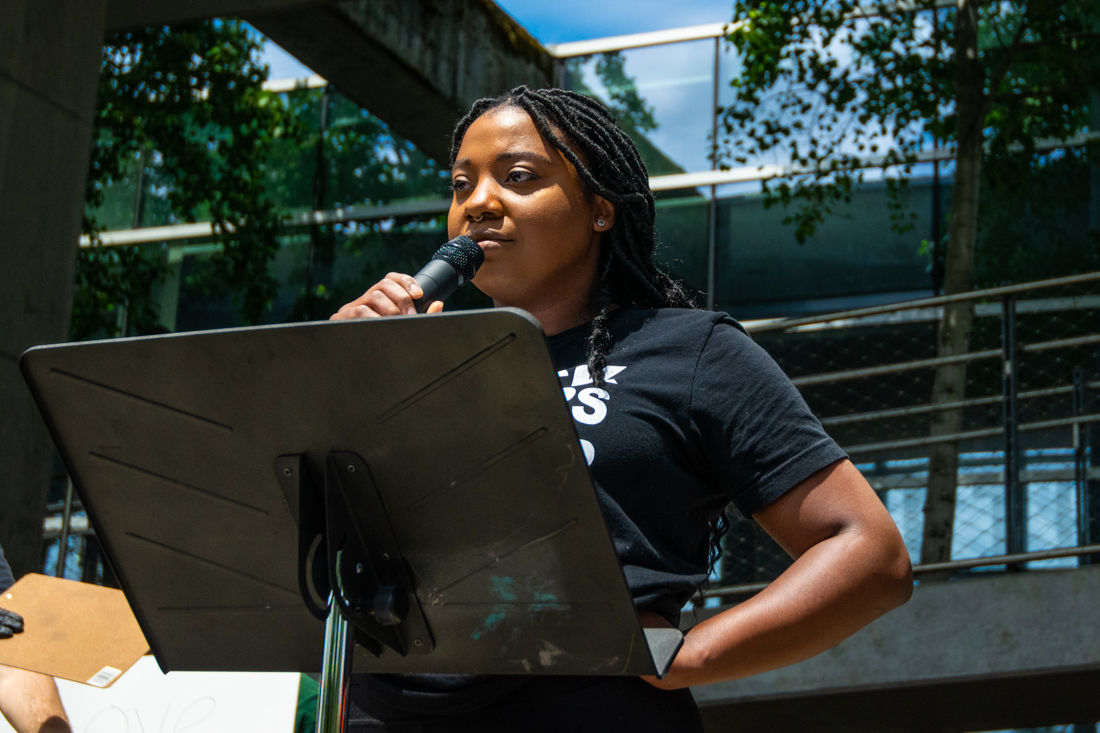 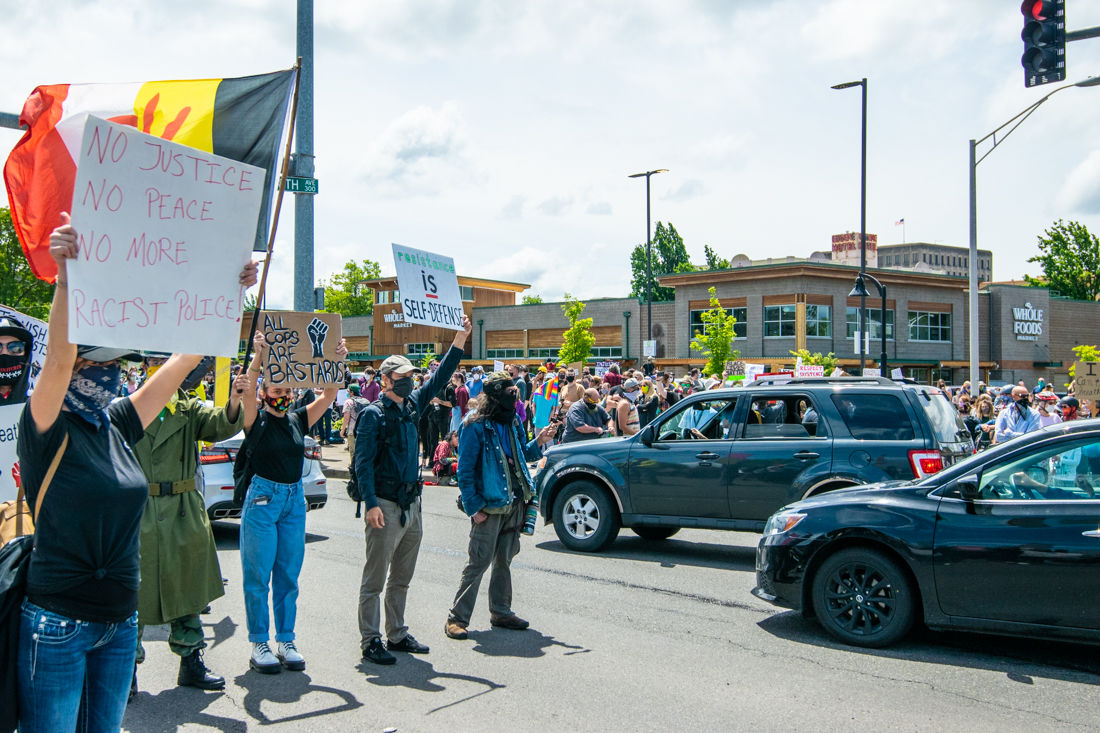 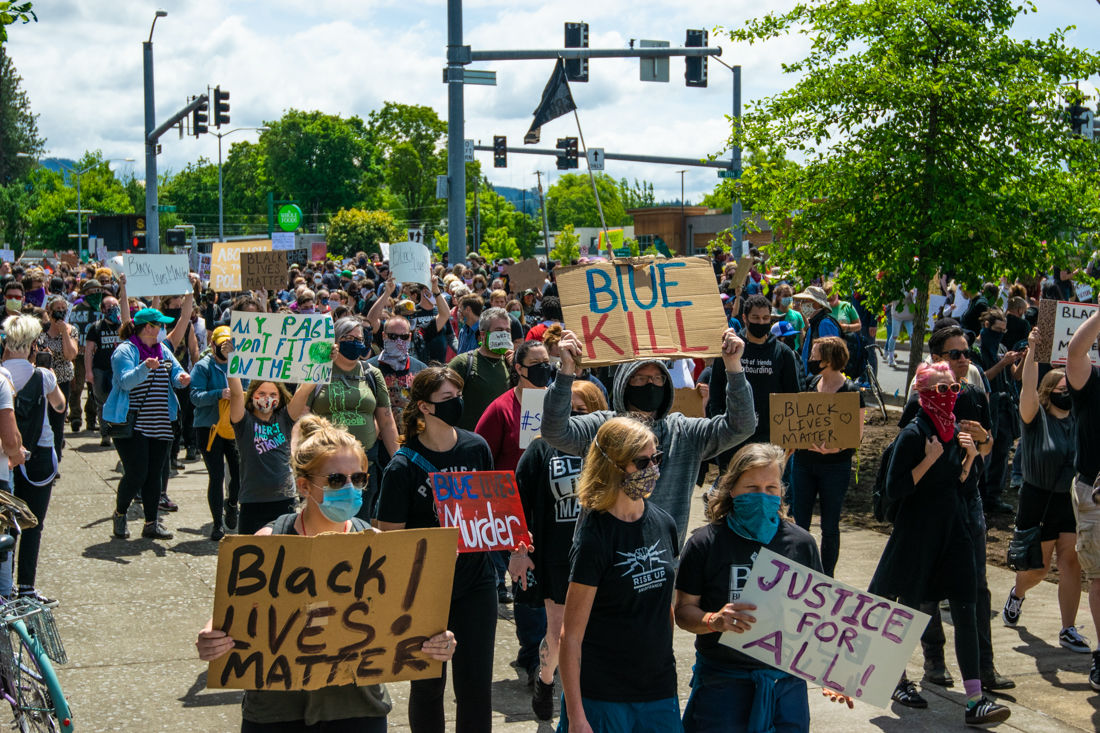 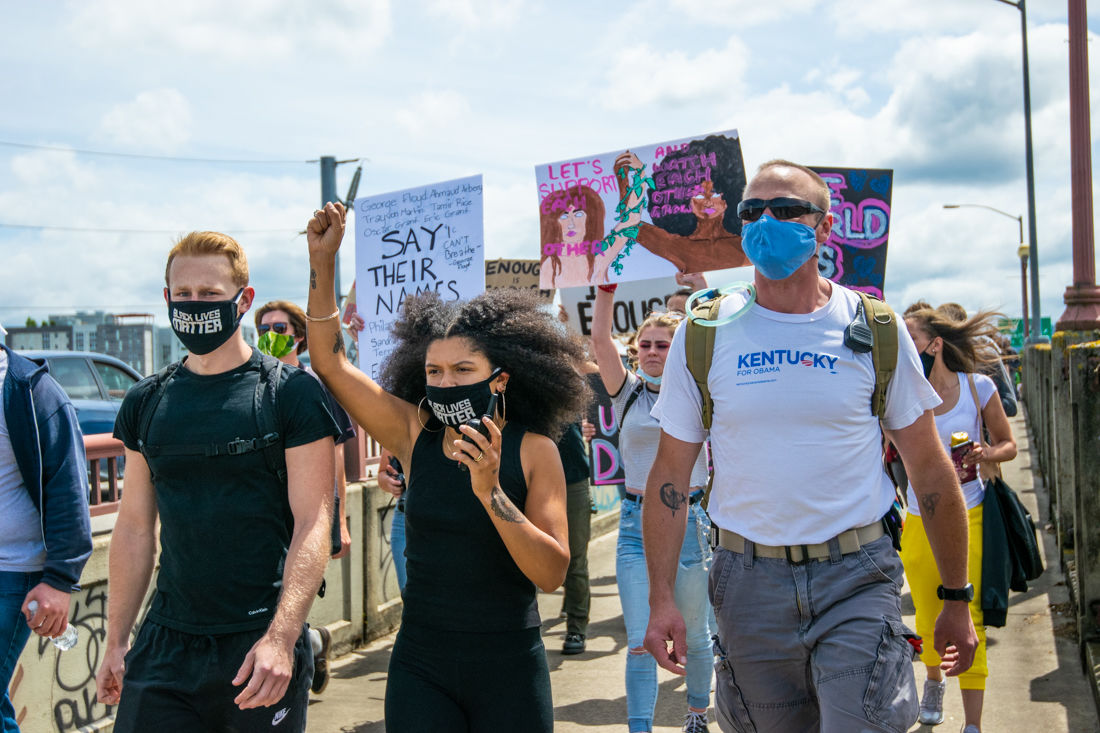 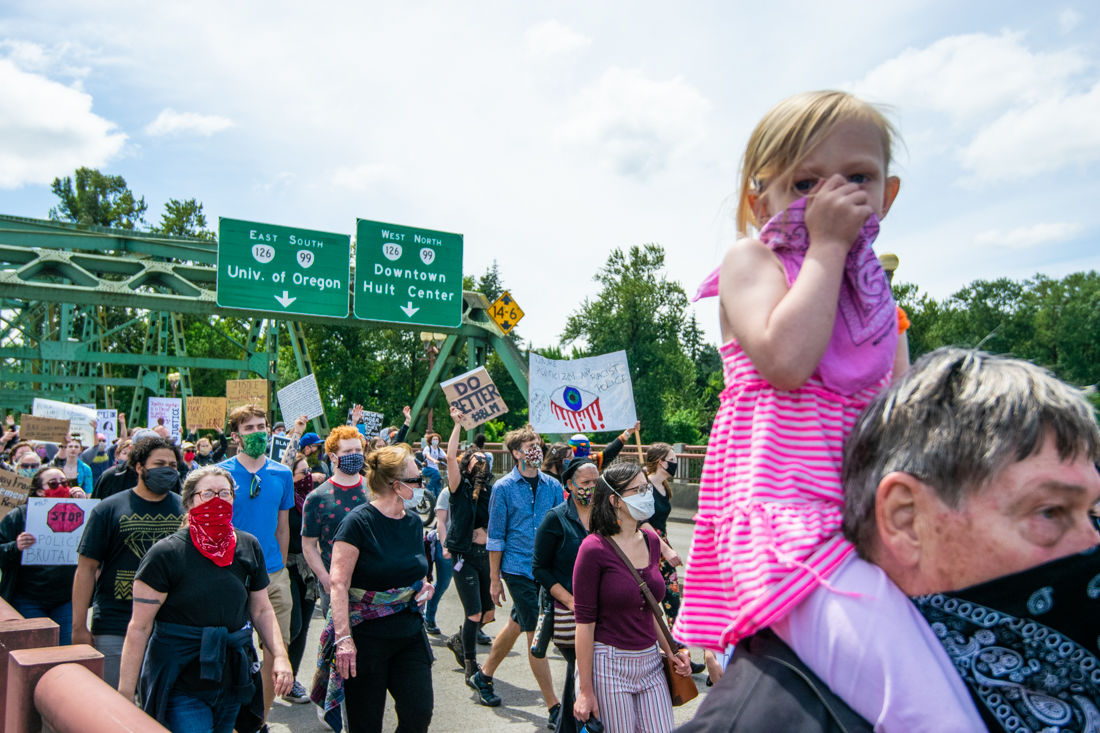 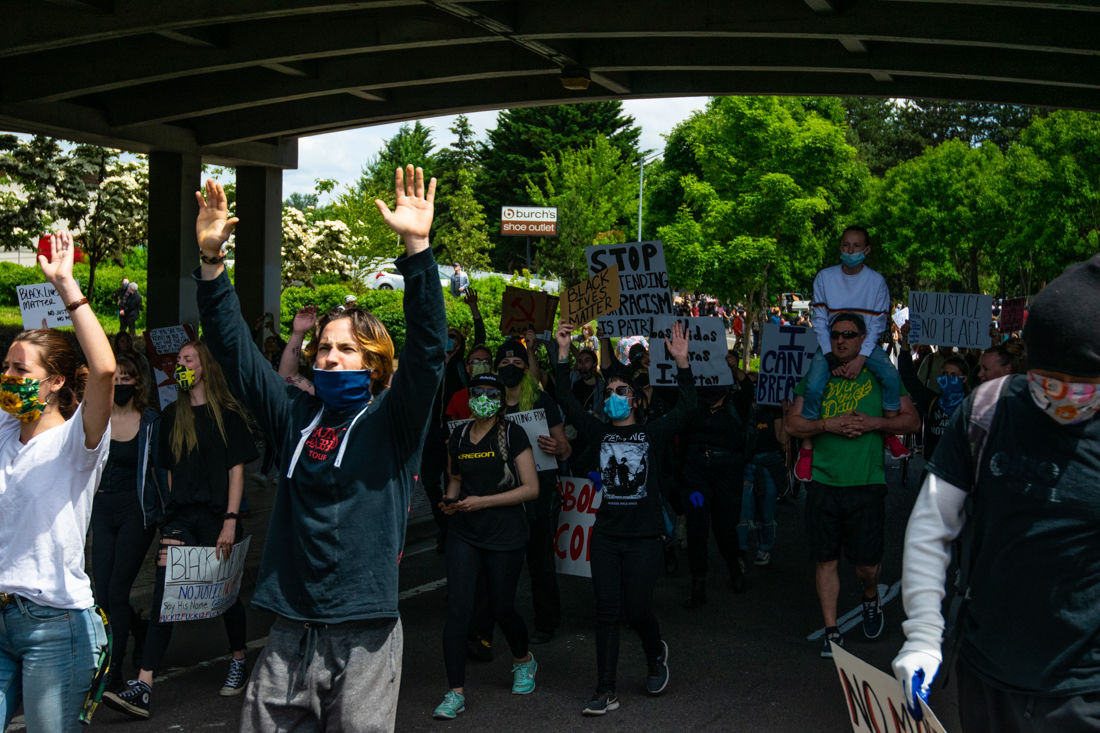 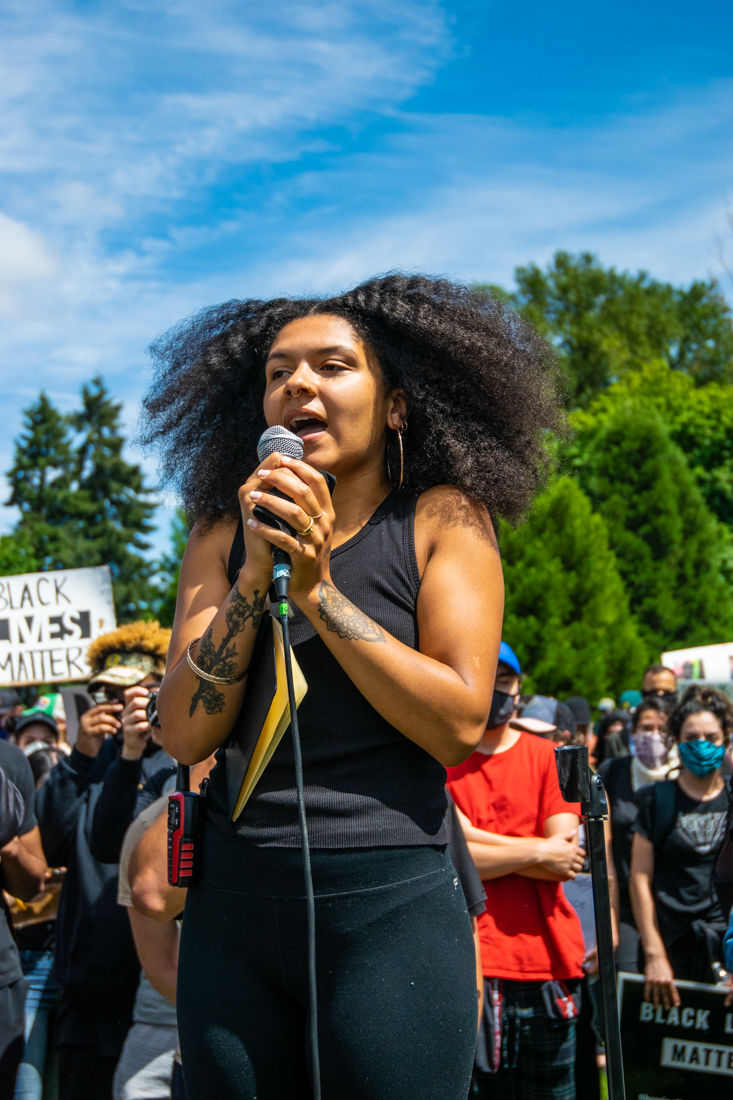 Protest organizer, Madeliene Smith, says she is “doing this because I’m angry by the inequality we see in this country, and from the people who we pay to protect us.” A Black Lives Matter protest takes place in Eugene, Ore. on May 31, 2020. (Kimberly Harris/Emerald) 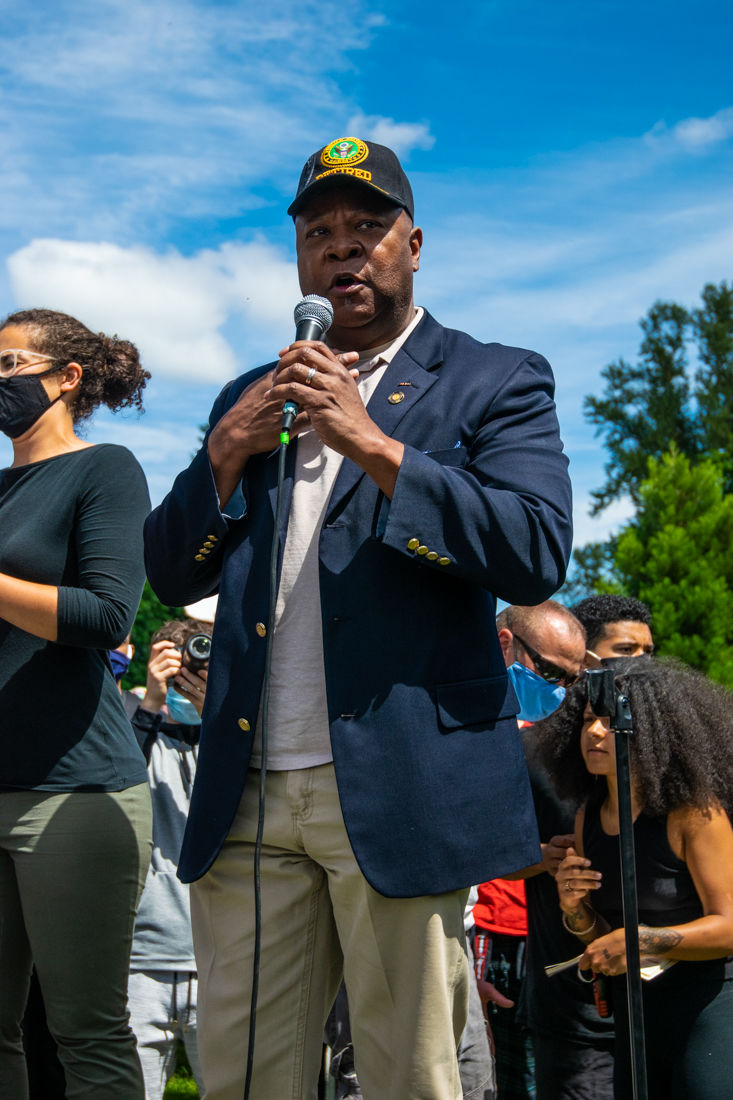 A few drivers honked their approval for the line of people walking towards the Wayne Morse Federal Courthouse. Many held signs — “fuck 12,” “we all bleed red” and “make America not racist for the first time” — to show their support for the Black Lives Matter protest Sunday.

The protest, which thousands attended, began with speakers on the steps of the courthouse. People — most wearing masks — filled the steps, walkway and street in front of the courthouse. A U.S. Department of Homeland Security vehicle blocked off the end of the street. By the time the lead organizers — siblings Madeliene and Spencer Smith — began speaking, more people made their way toward the courthouse.

“We’re just very grateful and we just hope that everything stays peaceful and we can make more progression from here,” Madeliene said.

At the courthouse, the song “Fuck Donald Trump” played before speakers stepped up to the microphone. The crowd chanted along.

“First off, I’d like to say, holy shit,” Madeliene said.

“I’m truly taken aback by the amount of people here today,” she continued. “I have never — for, at least, the few years I’ve lived in Eugene — I’ve never seen these many people come out, and for something like this. I am just proud.”

Eugene is one of many cities across the nation to see residents protest in peaceful rallies after video spread of Minneapolis police officer Derek Chauvin killing 46-year-old George Floyd by kneeling on his neck. Chauvin has since been fired from the police force and charged with third-degree murder and second-degree manslaughter.

On the night of Friday, May 29, the Eugene Police Department confronted protesters and rioters in downtown Eugene, following property damage and fires.

There was no violent conflict with police at the Sunday demonstration. But at the intersection of Eighth Avenue and High Street, a protester blocked a car. The driver then accelerated into the protester, who slid up the car, which quickly slowed down after other protestors shouted and hit its windows.

Eugene NAACP President Ibrahim Coulibaly spoke about the microaggressions African Americans experience. “We have that trauma,” he said.

When Coulibaly spoke of the controversial charges against Chauvin — including third-degree murder, or an unintentional killing, a charge many see as too lenient — the crowd erupted into boos. “We must pay close attention to what’s going on,” he said.

“It is time for us to organize,” Coulibaly said. “It’s time for us to strategize.” He urged the crowd to vote and to run for office at the local, state and federal levels.

“We’re tired,” said Coulibaly, adding that he doesn’t want to keep protesting like this, because it means someone else died. The crowd again began to shout “Black lives matter.”

“Thank you for supporting this movement,” Eugene Attorney Jessica Brown said. “It is not a choice for Black people in America. It’s not an option to not stand up when we are being slaughtered in the streets.”

“We are not here to make you comfortable,” Brown said. “We are not in the business of negotiating our humanity.” To those who remain neutral, she said, “your privilege allows you to do so.”

“Racism is alive and well” in Oregon, said Brown. Despite the state’s liberal identity, Brown said, “that doesn’t water down the Confederate flag.”

“If all lives matter,” Brown said, “why aren’t you as outraged as we are?”

The crowd began moving, heading toward Alton Baker Park by way of Ferry Bridge. Thousands walked up onto the road and under the bridge, shouting “no justice, no peace” and “say his name — George Floyd,” among other chants.

Eventually, Eugene police blocked the bridge to cars in an unplanned closure to prevent any altercations.

“I never thought Eugene would respond this way,” he said. Booker said he’d seen crowds like this before, both in Seattle and in Los Angeles in the early 1990s, after 25 police officers were acquitted in fatally beating Rodney King. Booker said that he was glad to see so many people wearing masks.

“I’ve seen this my whole life,” said Booker, adding that the only way to make a difference is through legislation and that he hoped that people would vote.

Max Gause, another attendee, expected the large size of the crowd. It was his first BLM protest, but he had been involved in women’s marches previously. “This is real,” Gause said. “It’s not just a thing to do. It exists.”

The protesters entered Alton Baker Park. Many formed a large crowd around another stage, where guest speakers, including Eugene Mayor Lucy Vinis, would speak.

“How do we get rid of that disease that’s been festering in all of us for so many years?” Oregon Senator James Manning asked. He said that it was important to vote, and run for office, in order to make voices heard.

Manning said he would work toward statewide accountability laws relating to use of force with police, as well as calling for eliminating private prisons in the state of Oregon.

Eugene City Councilor Greg Evans said that he’d experienced two riots by the time he was 10 years old. Three days after moving to Eugene, he said, EPD stopped him on the street, thinking he was a suspected murderer they were searching for. In total, he said, police have stopped him 45 times since he’s lived in Eugene.

He said that the violence against children in school districts, from kindergarten to high school, was most disturbing, detailing accounts of his own children experiencing racial prejudice and slurs.

During his speech, the sound briefly cut out. Members of the crowd offered up megaphones for Evans to continue speaking, before the sound reconnected. The crowd took a knee at the end of his speech and shouted “no more” and “no fear.”

“This is a grassroots movement,” Evans told the Emerald after the protest. He said that’s what makes it powerful; people want to be there.

Associated Students of the University of Oregon president Sabinna Pierre asked for a moment of silence for those lost to police brutality. The crowd raised their fists. “We will be seen, and we will be heard,” Pierre said.

“I feel like everybody out there was genuine about their reason for coming here,” Madeliene said. “I feel like people put their shit aside for the day to just be real, to fight for something real.”

Zack Demars and Gina Scalpone contributed to the reporting of this story.

Black Lives Matter: A look at the past three weeks