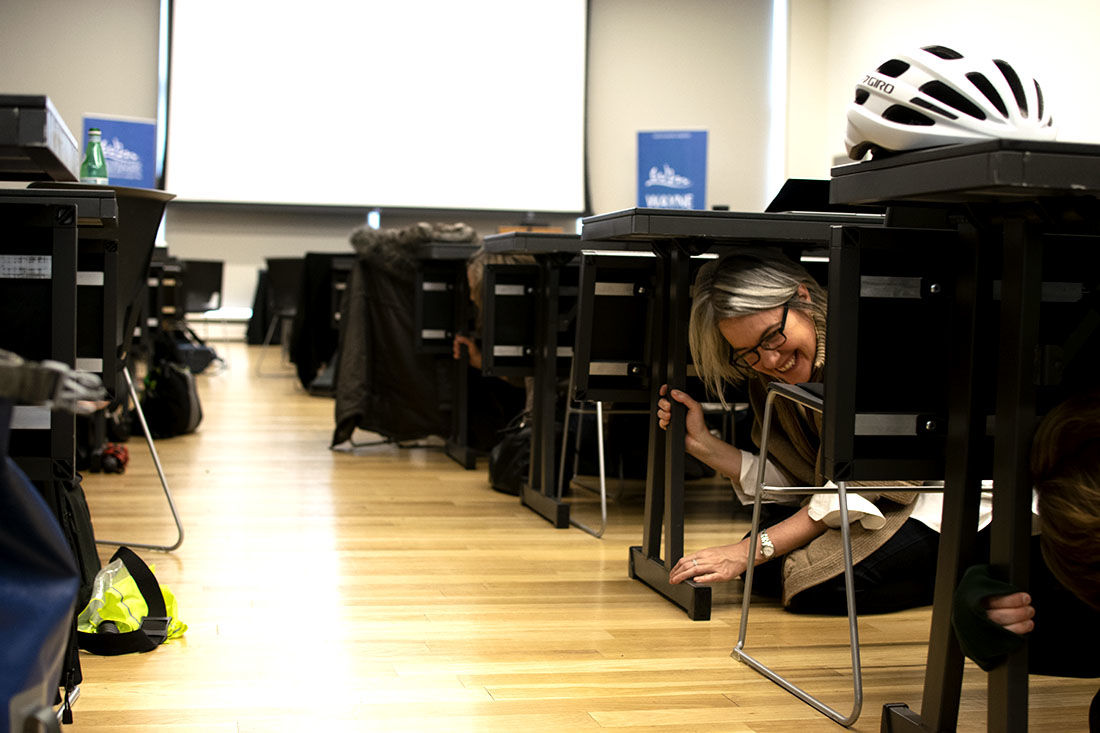 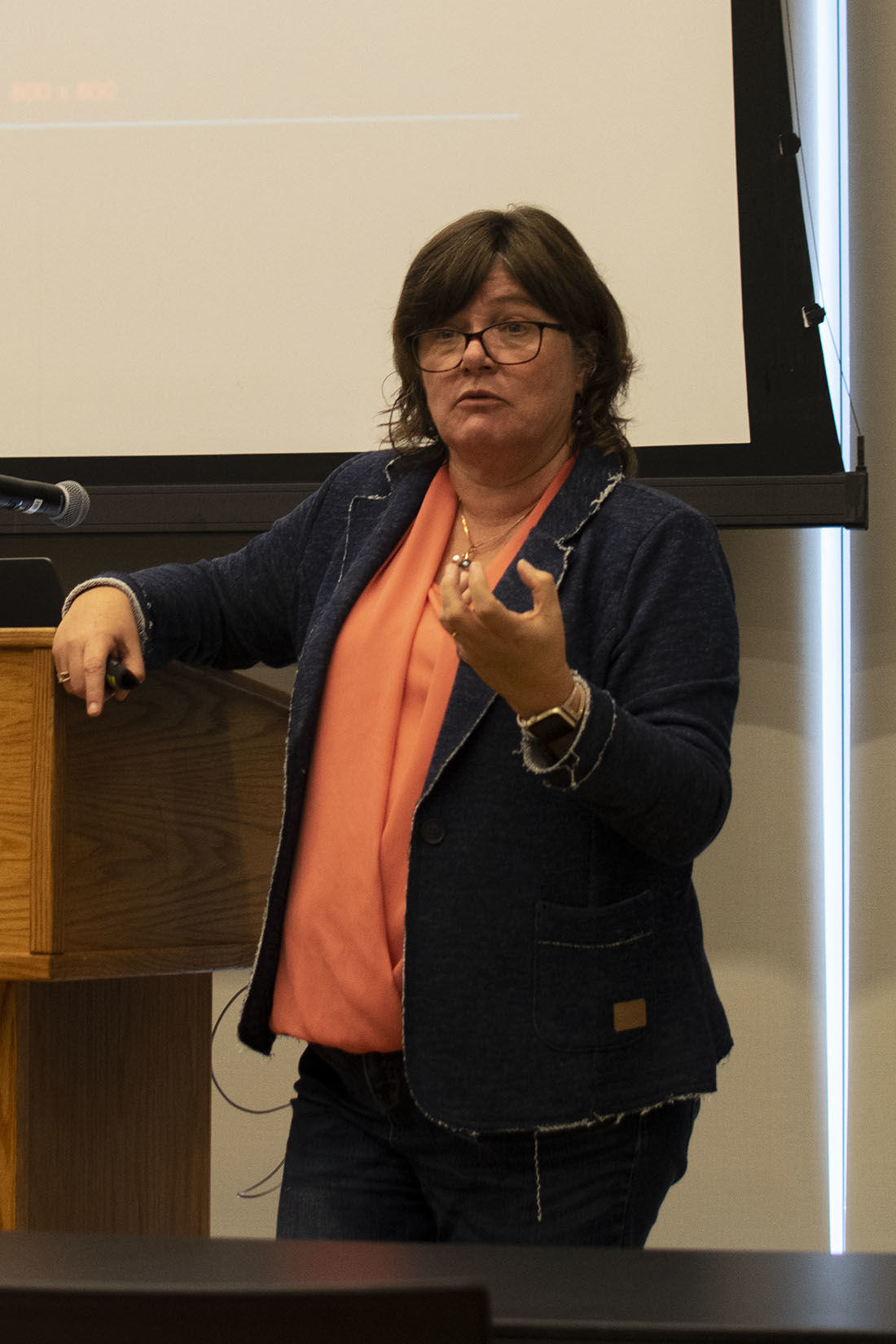 Dr. Lucy Jones, seismologist and public voice for earthquake science, shares her knowledge of earthquakes based off of her research and experience of living in California. (Kimberly Harris/Emerald) 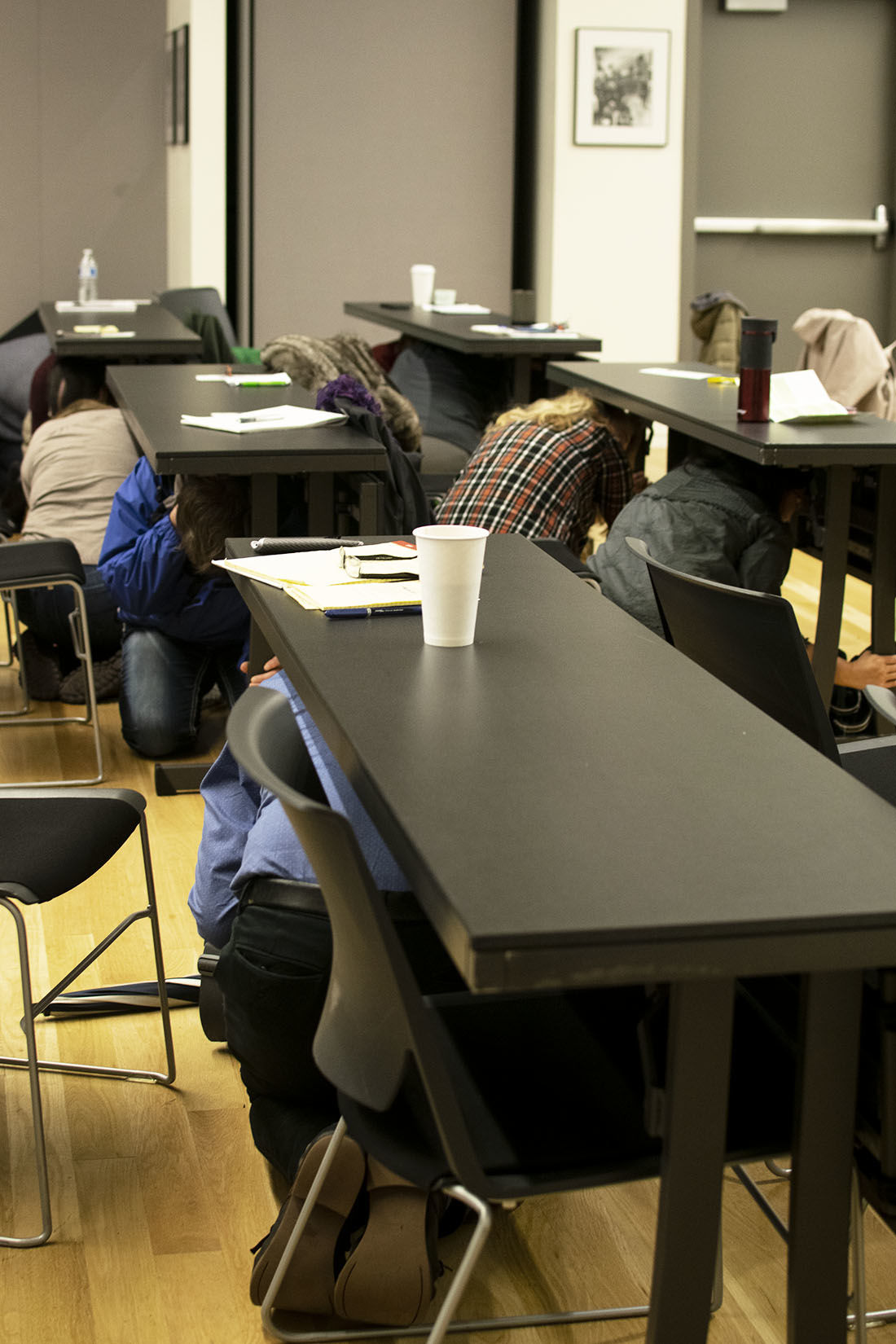 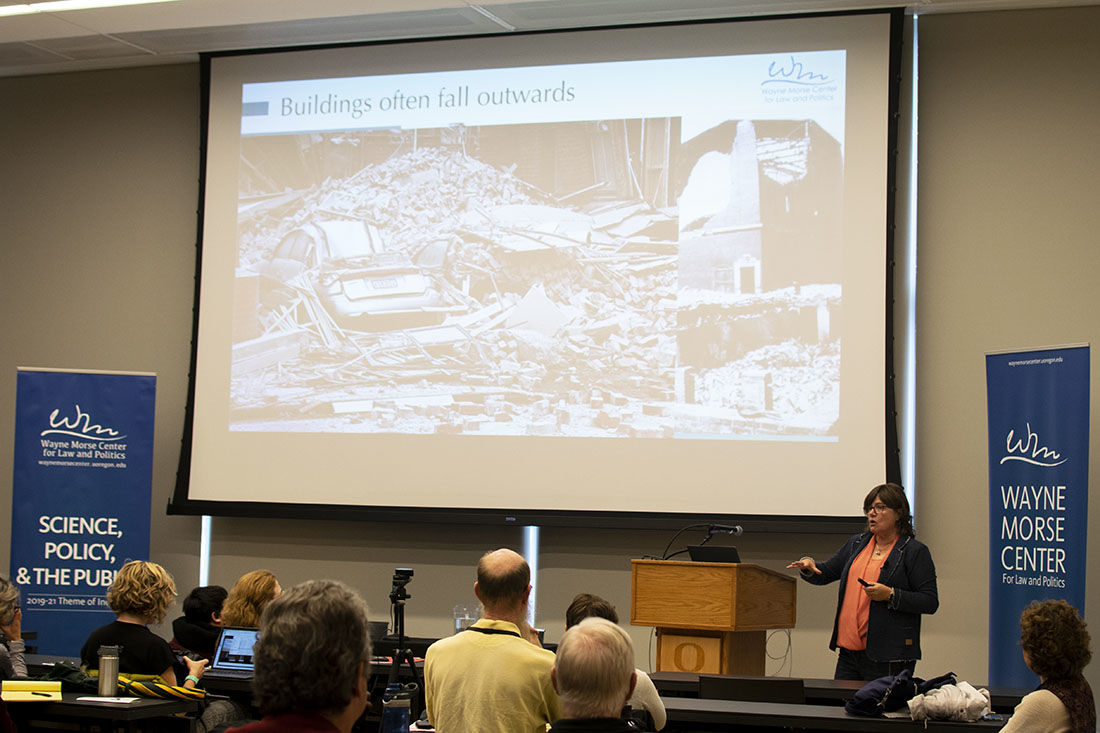 Dr. Lucy Jones explains how it can sometimes be safer to stay inside during an earthquake because buildings often fall outwards. (Kimberly Harris/Emerald)

On Oct. 17, over 50 people dropped to the floor of the EMU and held tightly onto their desks, protecting themselves from an earthquake. But there wasn’t one – they were taking part in an earthquake preparedness training held by Dr. Lucy Jones, a seismologist from Southern California.

Jones, creator of the GreatShakeout Earthquake Drill, is visiting University of Oregon throughout the month of October to hold seminars, educate students and share insight about earthquake disaster preparedness.

The Pacific northwest is long overdue for the Big One — a massive earthquake that researchers estimate hit this area every 243 years. It has been 318 years since the last large earthquake occurred and the quake is long overdue, according to United States Geological Survey.

Jones said that Oregon will have a far more difficult time than California in dealing with the earthquake impacts. California is much more accustomed to having earthquakes hit larger cities and the state has made proper adjustments to infrastructure, procedures and preparedness education.

“Without smaller earthquakes, it is difficult to gain public incentive to get things done,” said Jones. “So, simple actions like requiring houses to be bolted to their foundation, came into action in Southern California in 1935. That same requirement came into action in Oregon in the 1990s. It does pose extra challenges to Oregon about how to act.”

As far as immediate effects, Jones said that Eugene will face challenges with sewage, dams and wildfires.

“There is no tsunami effect in Eugene. Because of the global tsunamis that have happened, there’s a huge public fear of them,” she said. “But for Eugene, the big thing is going to be disruption of infrastructure. No sewage for a year? That’s a really big public health issue.”

Over this past year, there have been several large quakes felt in Oregon, according to news coverage. Small quakes occur frequently, up to several per day. However, the magnitude of these earthquakes has been steadily increasing recently, causing concern within the scientific community.

OPB described a magnitude 5 earthquake as the equivalent to releasing energy of 95 grains of sand. In contrast, a magnitude 9 earthquake would release the energy of 100 million grains. The difference is staggering.

The Big One, according to the Oregon Office of Emergency Management, is predicted to be a magnitude of 9.0. The Cascadia subduction zone is perimeter that runs up the coast, from southern Oregon all the way to British Columbia, and is the most vulnerable area for earthquake impacts. Intensity will decrease further from the coastline, said the OCEM website.

“The Pacific northwest is a tectonically active region with the subduction of the Juan De Fuca Plate under the North American plate,” said UO geophysicist Estelle Chaussard. “Because of this tectonic setting, earthquakes are very common in the Pacific Northwest and are not a coincidence.” Tectonic settings are distinct geological areas that are susceptible to more movement, according to USGS.

Chaussard said that earthquakes cannot be predicted or stopped, but those living in the area can remain prepared. She recommends using the Cascadia Region Earthquake Workgroup for more information on how to deal with major earthquakes as they come.

Jones mentioned complications with electricity and sewage, and finding solutions for those complications are the first step for mediating damages. Oregon State University was granted a total of $400,000 this summer to conduct earthquake research in attempt to find solutions to these projected concerns.

“The main gist of the project is to develop an idea of what scale of damage to the electrical system we could expect from an earthquake, and also get a sense of what recovery looks like as well,” said OSU Professor Ted Brekken, a key asset to the new Earthquake Resilience of the Western Power Grid project. “There are some vague estimates of what the impact is, but those are based mostly on historical benchmarking, comparing us to other areas, and things like that. Those are important estimates to make, but they're not very precise.”

The project hopes to prepare industries along the coast by quantifying damages and searching for solutions before the destruction hits. “There is a very large body of work to be done,” Brekken said. “We think it's a very, very important step, but it really is just opening the door for a lot more work to be done by ourselves and others."