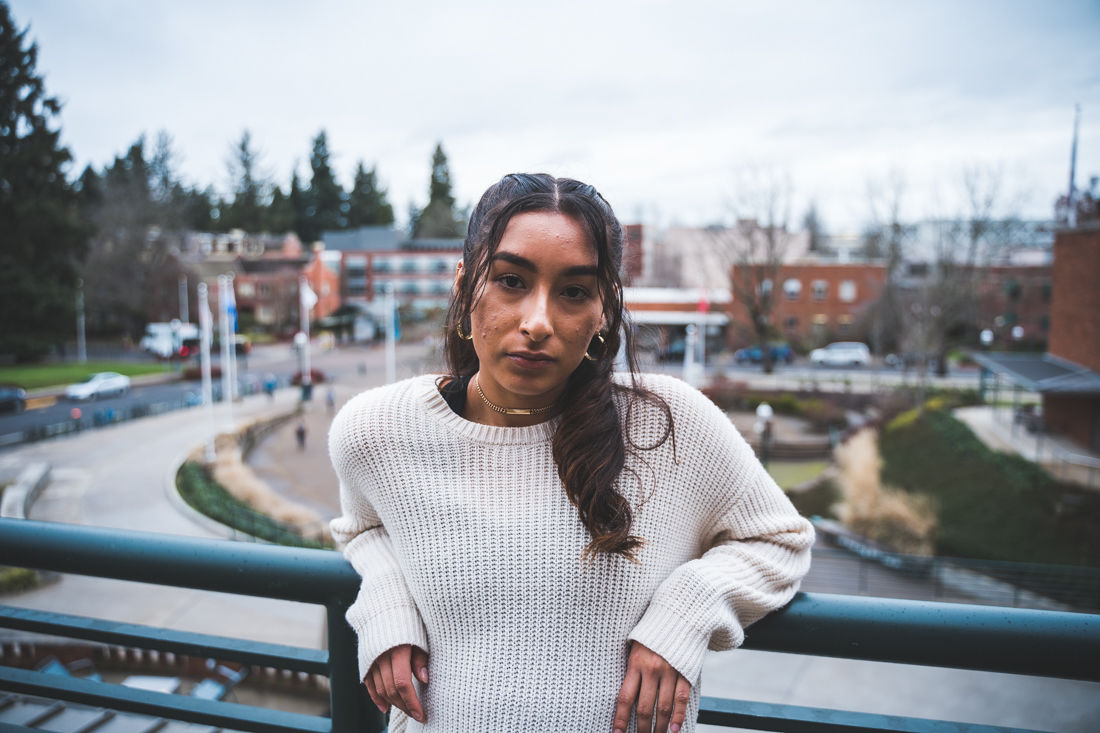 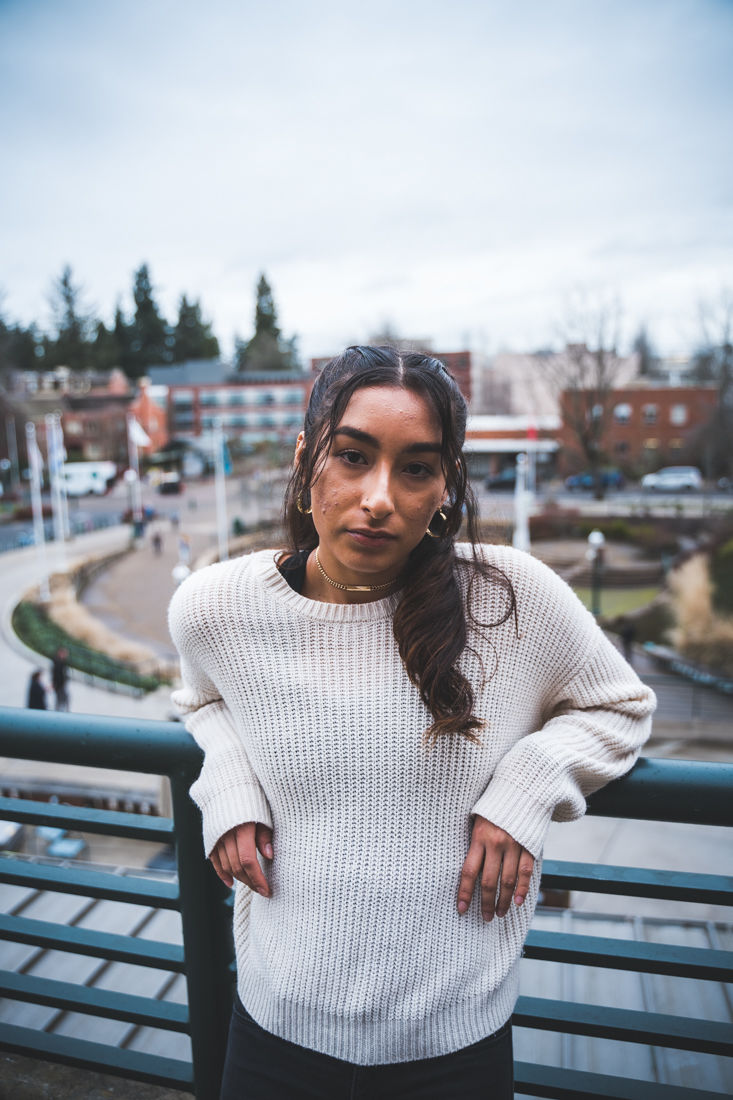 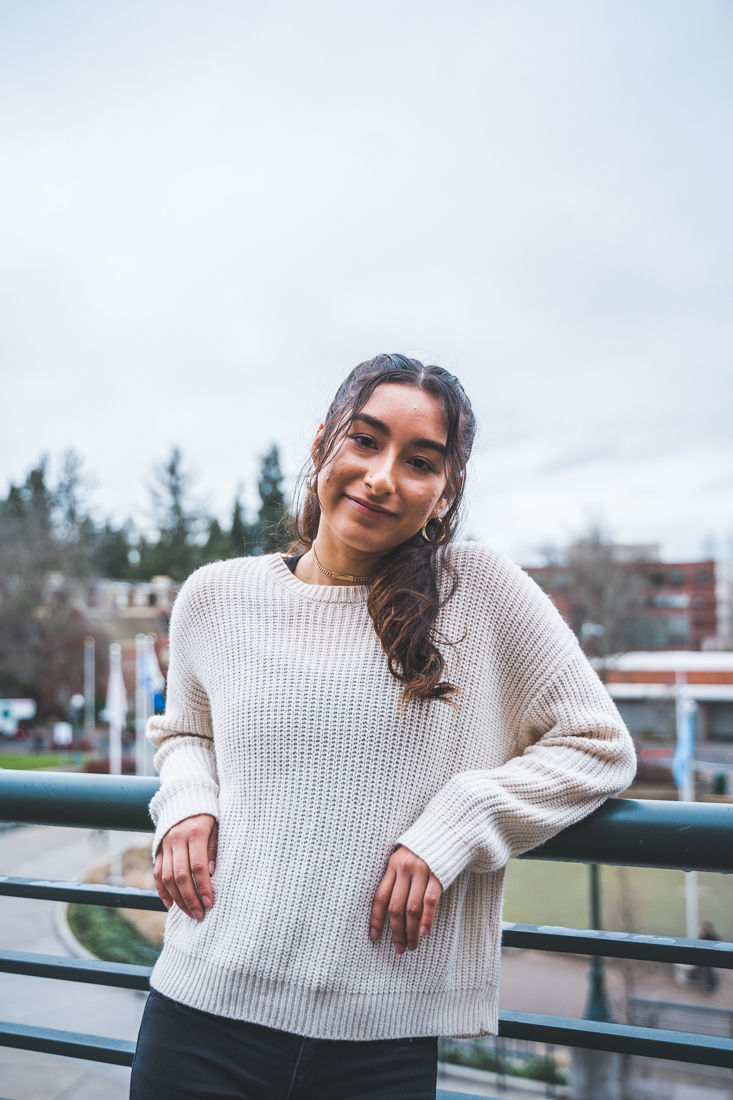 Being defined by one thing can be constricting for some and a source of pride for others. In Cynthia Aguilar-Arizmendi’s case, both sides of the sentiment are true. Aguilar is a fourth-year student at the University of Oregon studying public relations and political science and participating in many different community-based clubs around campus, as well as identifying with different communities.

The road to and through college has not been an easy one for Aguilar. She experienced much of what any typical student struggles through in their time at school; however, her ambitions and obligations kept her grounded.

Since her first day on campus, Aguilar said she wanted to work in the student government on campus. Starting as an intern, she rose through the ranks of ASUO to eventually become the head of the Athletics and Contracts Financial Committee.

Aguilar has also worked within MEChA (Movimiento Estudiantil Chicanx Aztlan) and its sister organization, Muxeres, helping marginalized communities for which MEChA advocates — including the Latinx community that she identifies with — through activism and advocacy. Her skills in leadership landed her an internship in Senator Ron Wyden’s office.

While she has been living in Oregon for the past 17 years, Aguilar was born in Acapulco, Mexico. While Aguilar was raised in the United States, every two years she reapplies for Deferred Action for Childhood Arrivals or DACA. Aguilar refers to her status as being ‘DACAmented’.

“Being ‘dacamented’ has been both a blessing and a curse,” Aguilar said. “It has held me back in terms of not being able to actively participate in the electoral process, qualifying for government programs and even being able to travel outside of the country.”

Despite this, Aguilar says that she is privileged to be able to even enroll in such a program. Acknowledging the limitations of DACA, she says it has been the reason that she has been able to do everything that she has done so far.

Four years ago, Aguilar was getting ready to become the first member of her family to attend college. The task of applying was her first hurdle in the long and winding road that is putting oneself through school. Since she had spent 17 years of her life in Oregon, it was a fairly simple choice to stay nearby for both the benefit of seeing her family and in-state tuition.

“I get the question a lot, ‘Why did you choose the University of Oregon?’ I always give some sort of answer, ‘oh the greenery,’ or ‘the trees’ or ‘it reminds me of home,’ but in reality, the reason I chose the university was because their process of admission for people in my circumstance was so much easier than other schools I was applying to,” Aguilar said.

Aguilar claims that Oregon State University in Corvallis said it would charge her international student rates if she had attended school there. The only fix for the issue, she said, was to prove that she intended on applying for citizenship.

“When applying for the Tuition Equity benefit, the student has the option to include a copy of their application to register with a federal immigration program or federal deportation program, or indicate that they plan to seek U.S. citizenship in the future as permitted under law,” Erin Rau, Oregon State University’s associate director of operations said.

However, the Tuition Equity benefit still directs that potential students indicate that they are planning on becoming citizens, an option that is not readily available for DACA recipients.

“I remember them being so difficult about it and telling me I had to provide proof that I planned on applying for citizenship in the future. I told them I couldn’t do that because of the program that I am in. Every two years, I am renewing it. There is no pathway to citizenship,” Aguilar said.

The story was different when the time came to apply for UO. Aguilar found that once she was accepted, they had every intention of charging in-state tuition without scrutinizing her status.

After moving into the dorms on campus, Aguilar started her search for a place to gain the needed experience to advocate for others. On that first day, she landed in the ASUO office within the EMU. She started out working as an intern there.

“She participated in every meeting. It was clear that she was listening and engaged. She even took notes,” Becky Girvan, the director of ASUO said of Aguilar.

Girvan recalled Aguilar’s earlier days working on the EMU board within ASUO and seeing something extraordinary about her drive and passion.

“These things stand out to me,” Girvan said. “Everyone engages in a different way. When I see an officer come in and take notes on every conversation that is happening, that stands out as a certain kind of leader.”

In her final year at UO, Aguilar is working as the chairperson of the ACFC for the second year in a row. She helps fund contracts that allow students to use the LTD transportation system for free, access student advocacy programs and get free student tickets for athletic events.

For the past four years, Aguilar has gained valuable experience and mentorship in every part of her college career. One group that Aguilar has done extensive work with is MEChA de Oregon and its sister organization, Muxeres.

MEChA is a student organization on campus that promotes higher education, culture and history for indigenous and oppressed communities, though all are welcome to join MEChA, according to their website.

In Aguilar’s own words, MEChA has had a history of “machismo” or toxic masculinity. In an attempt to break away from that environment, women within MEChA created the branch known as Muxeres.

Muxeres is more focused on the female perspective on the same issues MEChA addresses. Muxeres was established in 1995 with the purpose of empowering Chicanas within MEChA and those that belong to other women’s groups of color, according to their website.

Aguilar took a commanding position as the recruitment and retention board member within MEChA. Alongside her role in MEChA, she has advocated for Muxeres to become a larger, more independent group.

Joel Iboa, coalition manager for immigrant rights organization Causa Oregon and advisor to MEChA de UO has collaborated with Aguilar on many different projects and commented on her commitment to being a steadfast community advocate.

“I met Cynthia while she was working in her capacity within MEChA de UO,” Iboa said. “The first time I worked with her was when I consulted with the MEChA de UO about organizing a rally against the Lane County sheriff, who was allowing Immigration and Customs Enforcement officers in the back of the jail.”

Iboa spoke to the many times Aguilar stepped up to the plate when it came to community activism. He recalled an instance when he was approached by Planned Parenthood in their attempt to find speakers for their reproductive rights rally that took place in Eugene on May 21, 2019. Iboa decided the best course was to pass on the offer to Aguilar, who accepted the opportunity.

Aguilar went on to write her own speech and present it in front of hundreds of activists during the rally.

“Cynthia is very thoughtful and persistent. She always asks the right questions,” Iboa said. “She’s someone who, when you call her and ask her, is ready to go. Her willingness and expertise is something else.”

Aguilar hopes to continue to inspire individuals and change people’s perspectives with her words.

“I live my days knowing that everything that I have worked for can be taken from me,” Aguilar said. “and that is both a great and scary feeling.”

The Daily Emerald is one of many campus groups funded through the ACFC — an organization that Aguilar is the chairperson of. Every year, the Emerald presents to the board to secure funding. Despite the Emerald’s relationship with the ACFC, we felt this story was important to tell. The reporter who wrote this story, sophomore Bruno Crolla, did not add comment during the petitioning process. He began reporting this story in mid-November, before the Emerald entered the funding hearings on Nov. 21.

Bruno was sent an article by a peer about a meeting in the Lane County Public Service Building on the topic of DACA. The headline was “‘Dreamer’ stands up to emphasize DACA importance’ and he was told that the individual at the center of the article was involved in ASUO. After learning about her position in ASUO, Bruno reached out to Cynthia and asked if he could interview her.

Correction: A previous version of this story misspelled the student group Muxeres as "Mujeres." The group changed its name to "Muxeres" around two years ago, according to a newsletter from the group, though it is pronounced the same.