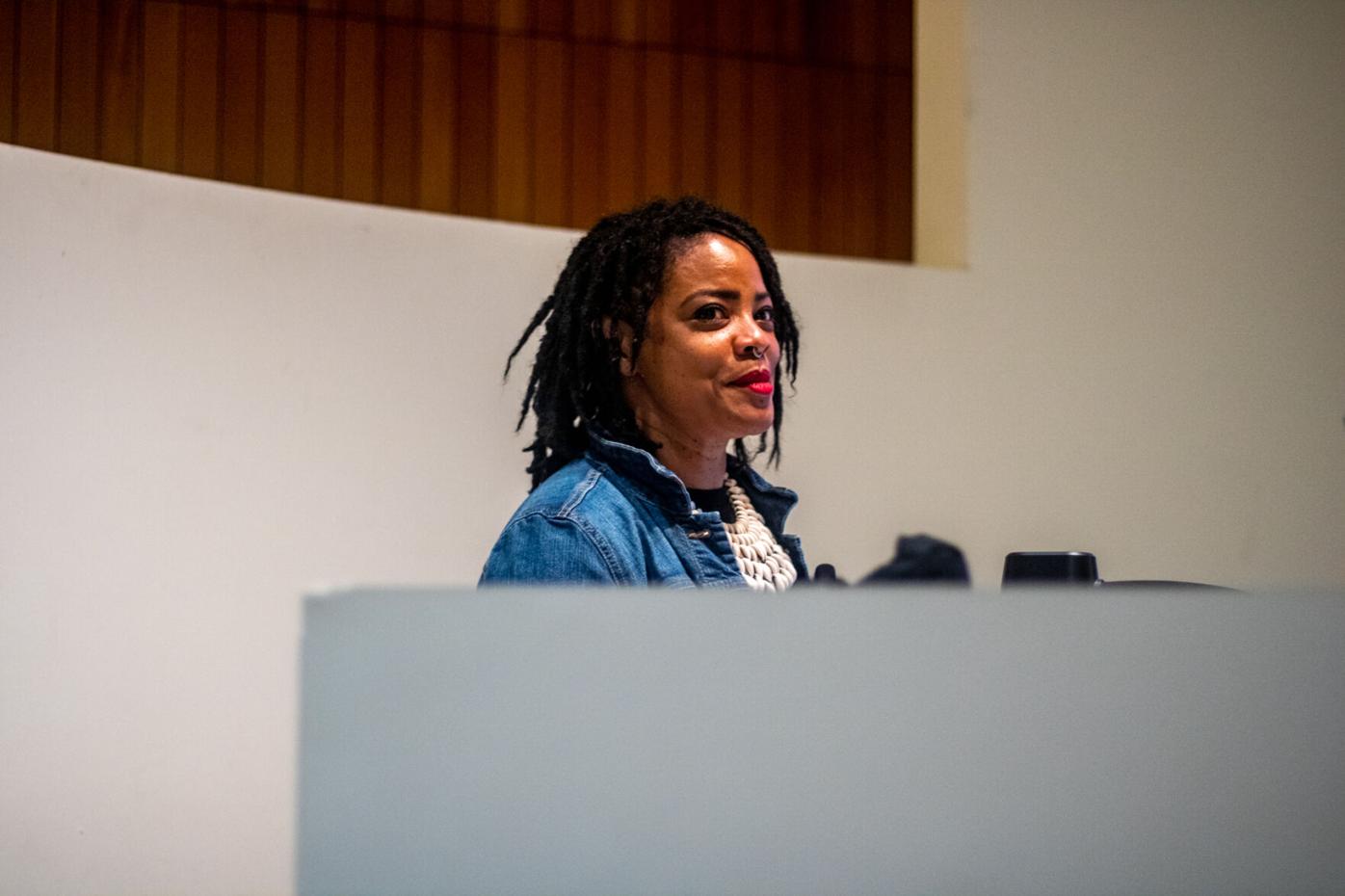 Charise Cheney listens to a question from a student during her morning class on November 4, 2021 in Lawrence Hall. Faculty at the University of Oregon, as well as the president of the local chapter of the NAACP, believe that the controversy surrounding critical race theory is based in a desire to maintain white supremacy, and that an inclusive curriculum benefits everyone involved in education. (Will Geschke/Emerald) 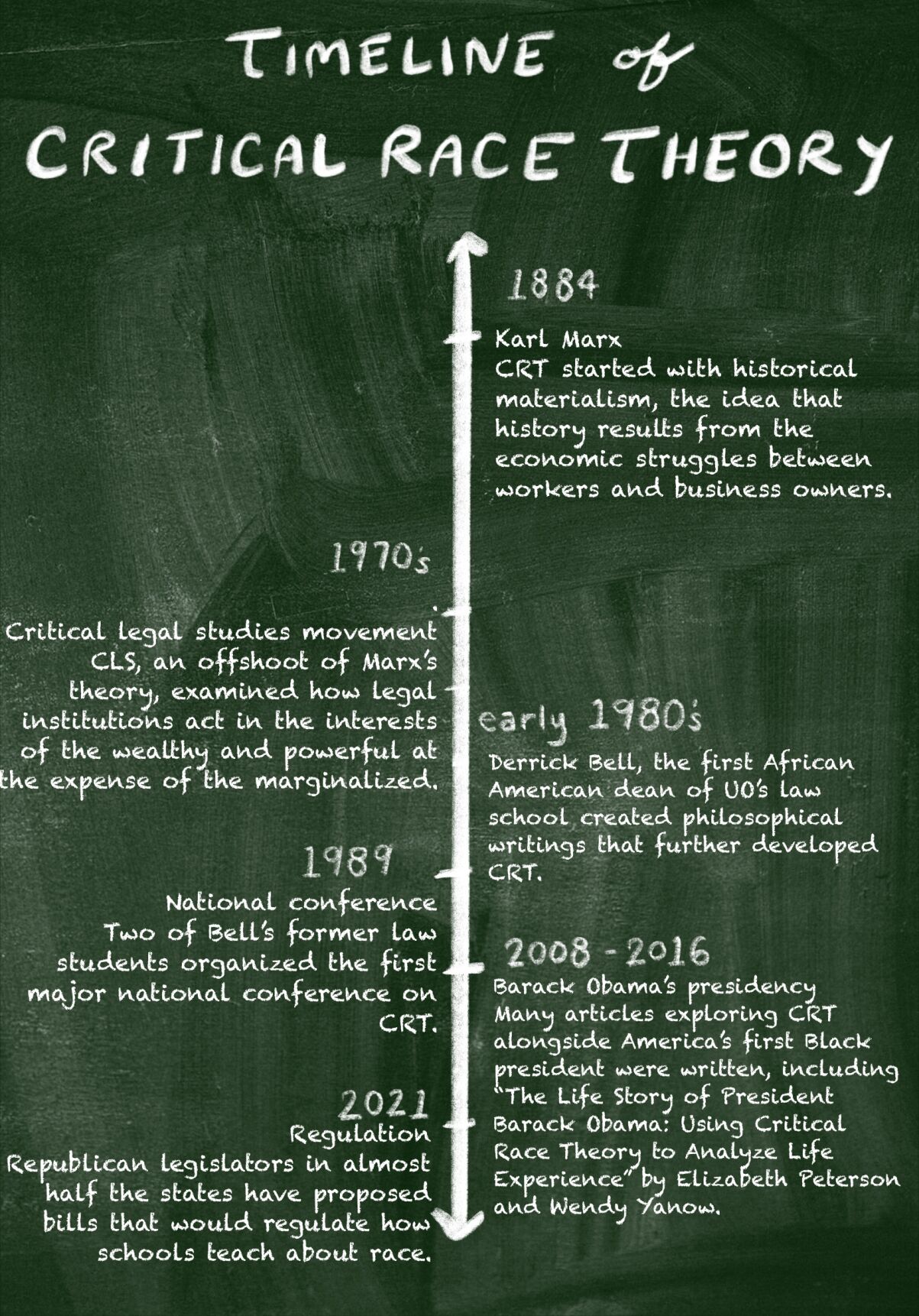 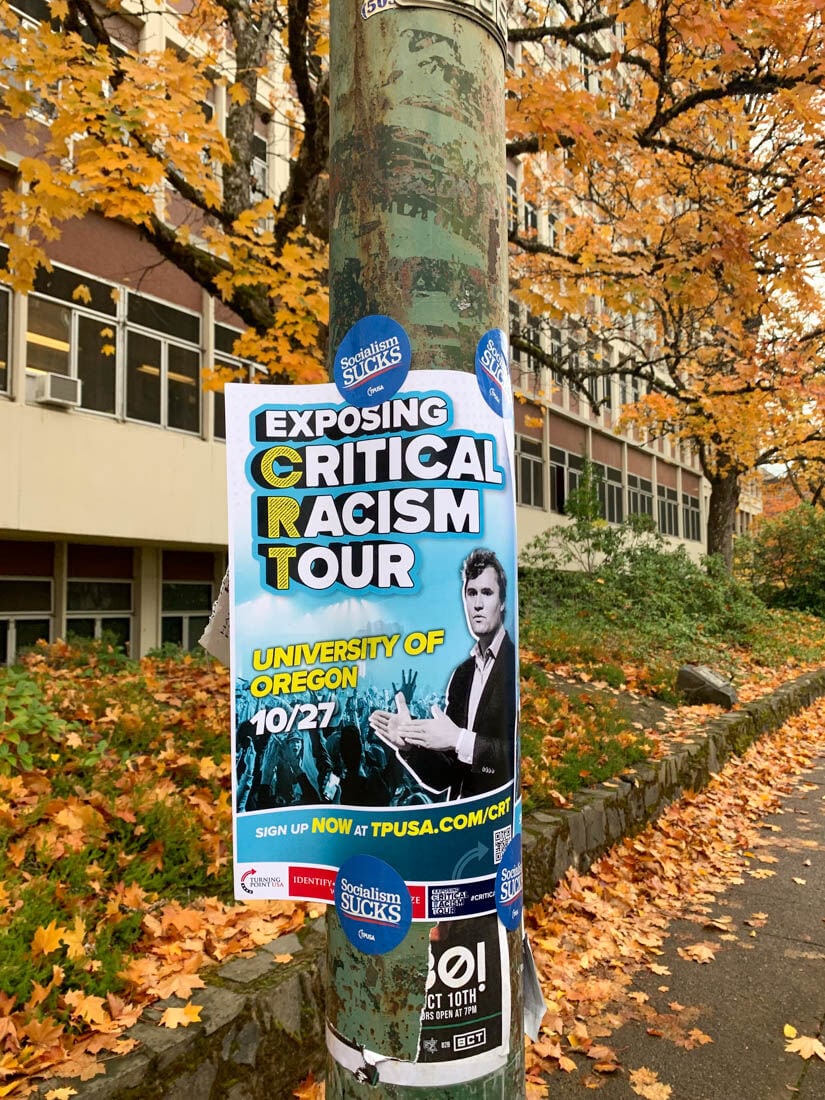 When conservative political commentator Charlie Kirk announced in September that he would be coming to Eugene for his Critical Racism Tour, the event was scheduled at the Graduate Hotel downtown. A few days later, the hotel announced it had decided against hosting the event. It cited messages from the community “indicating that the Event will cause damage or disruption to the Hotel’s premises, operation, guests, or reputation,” according to a statement from Graduate Hotel management to Turning Point USA, Kirk’s organization.

Kirk’s event traded hands between multiple venues, finally ending up at the Emerald Valley Golf Club in Creswell, about 15 minutes away from Eugene.

However, the Eugene chapter of the NAACP and University of Oregon faculty argue that critical race theory is misunderstood by those fighting against it and wrongly used to promote fear and anger in misinformed communities. Both groups work to combat that misinformation, define education on race and equity and emphasize inclusive teaching.

“If you can kind of force that connection, even if that connection doesn’t truly exist,” Pendleton said about intentionally mislabeling an inclusive curriculum for political purposes, “then it makes it easier for you to draw up fear, draw up apprehension, draw up reservation amongst people who may not fully understand the differences or nuances of which you’re talking about.”

Critical race theory, or CRT, developed as a legal term in the 1970s and 1980s, according to the American Bar Association. The term grew out of Critical Legal Studies, a field which argued “the law was not objective or apolitical,” the ABA writes, and “the law could be complicit in maintaining an unjust social order.”

As outlined by legal scholar Khiara Bridges, the main tenets of CRT include “recognition that race is not biologically real but is socially constructed and socially significant,” “acknowledgement that racism is a normal feature of society and is embedded within systems and institutions, like the legal system, that replicate racial inequity” and “rejection of popular understandings about racism, such as arguments that confine racism to a few ‘bad apples.’”

CRT also rejects the concept of color blindness when it comes to race, Bridges wrote, and acknowledged that racism is “codified in law, embedded in structures, and woven into public policy.”

CRT has UO ties through one of its originators: legal scholar Derrick Bell. Bell was the first African American dean of UO’s School of Law from 1980 to 1985 and focused on equity and disparity in the legal system.

The use of the term critical race theory by Turning Point USA and other right wing groups is a mislabeling when what’s truly meant is an inclusive curriculum, UO Ethnic Studies professor Charise Cheney said. Cheney said the mislabeling is “part of this movement by the radical right — conservative Whites, white nationalists or white supremacists — who are attempting to undermine a larger agenda for racial justice.”

Following the murder of George Floyd in summer 2020, she said many Americans became more undeniably aware of anti-Black racism. What followed was an effort to be more inclusive in history classes and social studies curriculum, and Cheney said the current debate around inclusive curriculum and the misrepresentation of CRT is the backlash to that effort.

“It’s very interesting the way they have been able to shift the narrative and rebrand a field of study that’s been around for 30 years,” she said.

Cheney had heard about the curricular movement before, but the push received new life in summer 2021. The debates “started spreading like wildfire in communities across the nation among Whites who felt their privileges were being infringed upon,” she said.

Miles Rowe Pendleton, the president of the Eugene chapter of the NAACP, pointed to the misunderstanding of CRT, as well.

He highlighted the recent legislation from multiple states that ban discussions of racism as a systemic issue, often without directly mentioning CRT.

An Idaho bill states that curriculum discussing critical and inclusive race issues “inflame divisions on the basis of sex, race, ethnicity, religion, color, national origin, or other criteria in ways contrary to the unity of the nation and the well-being of the state of Idaho and its citizens.” An Iowa bill banned teaching the ideas that “an individual, by virtue of the individual's race or sex, is inherently privileged, racist, sexist, or oppressive, whether consciously or subconsciously” or “a meritocracy is inherently racist or sexist, or designed by a particular race or sex to oppress members of another race or sex.”

RACE AND EQUITY EDUCATION AT UO

Cheney has worked for UO in the Ethnic Studies department since 2009, the same year the university established the field of study as a formal department. That departmentalization, she said, grew out of student demand — just like the developments of other initiatives including the Lylle Reynolds-Parker Black Cultural Center and the Black Studies program, the department of which she’s also the director.

“I think what we see is the more things change, the more things stay the same, in some way,” she said. “In that the administration tends to be stagnant until pushed into a different space or pushed to make changes.” However, she pointed to provost Patrick Philip’s initiative to develop a research and policy center focused on racial disparities, which he announced in October 2020, as a sign of a changing in the tides.

UO’s Critical Race Lab is another initiative working toward equity and inclusion in academia. As a coalition of academics “working at the intersection of geography and critical race studies,” according to the website, the group aims to “better understand the nature of white supremacy, its relationships to the economy, environment and landscape, how it has changed over space and time, and how it can be challenged.”

The group focuses on topics like environmental justice, immigration, feminist geography and food studies, according to its website. “Besides our scholarship, we are also committed to creating a supportive intellectual community that not only acknowledges our multiple identities, including as activists and parents, but also imagines an academic culture in which women, people of color, and queer people can flourish,” it reads.

Current projects include an investigation into how historic sites, especially national landmarks, represent foundational White supremacy, as well as probing the connection between the denial of white supremacy and the denial of climate change.

Cheney said the university still needs to confront the structural changes necessary to create a campus climate that is not isolating, alienating or hostile to students and faculty of color. “That’s a little more difficult to do,” she said. “I think there needs to be a more sustained effort to unearth the things in the multiple ways the BIPOC faculty and students feel alienated on campus.”

Pendleton said he hadn’t heard CRT discussed in Eugene until national discourse began on the issue — around the time Kirk announced his tour would stop in Eugene. His initial reaction was, “‘We’ll see if the community wants to have this be here. Let’s see if the venue wants to follow through with this,’” he said.

Community members had mixed reactions to Kirk speaking in Eugene. “I do believe in the First Amendment,” UO graduate student Duane Soubirous told KEZI. “If someone wants to listen to him, they should be able to hear them speak. I personally don't want to listen to him and won't be there."

On the Eugene Reddit page, people encouraged others to write to the Graduate with their concerns and left comments ranging from “let it be our responsibility to show racists that they are not welcome here” to “engage those with whom you disagree civilly and discover common ground while ferreting out bad ideas.”

When the Graduate Hotel decided to pull out, Pendleton made note of how the venue pointed to the possibility of hosting Kirk’s rhetoric as disparaging to their image. He said it’s important for communities to be careful about who they’re giving platforms to. “Is this genuinely political discourse that is rooted in good faith, truth, but just a difference of opinions?” he said. “Or is this something that is built upon falsehoods, misinformation, things that are just not accurate, not authentic?”

Cheney believes we are living in a moment of “radical possibility” for inclusive curriculum following the 2020 protests. So many students, regardless of race, were radicalized by the events that took place and now come into classes like Intro to Ethnic Studies “hungry for the material, engaging with the material,” she said.

“I love my job because of the potential I have to shift,” she said. “I used to say, ‘I just want to create a crack in the foundation of students.’ And once that crack happens, there’s a place that change can happen.”

Duncan is the news desk editor for the Daily Emerald. He's worn many hats at the Emerald, including associate news editor, labor reporter and crime reporter.