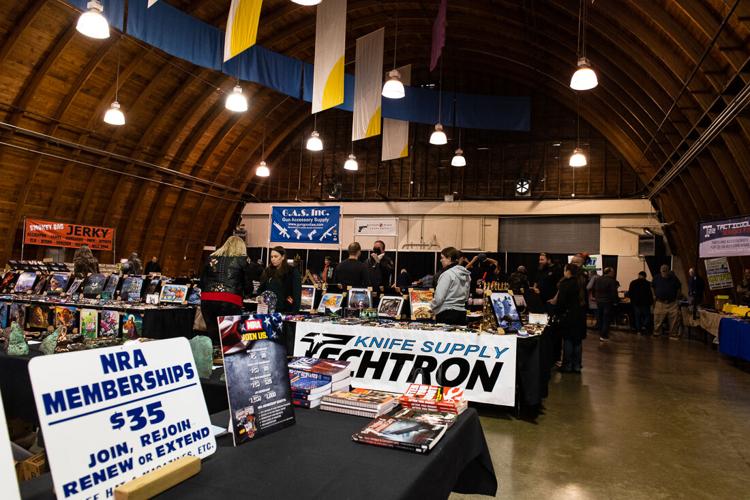 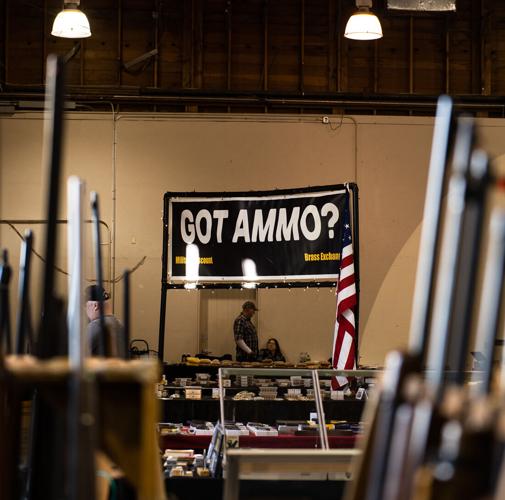 Recently passed Oregon ballot Measure 114 was supposed to tighten gun laws in Oregon, but the Measure is being blocked by state courts completely pending a full trial. The Eugene Gun & Knife Show was held at Lane County Fairgrounds on December 17th and 18th, 2022. (Ian Enger/ Emerald) 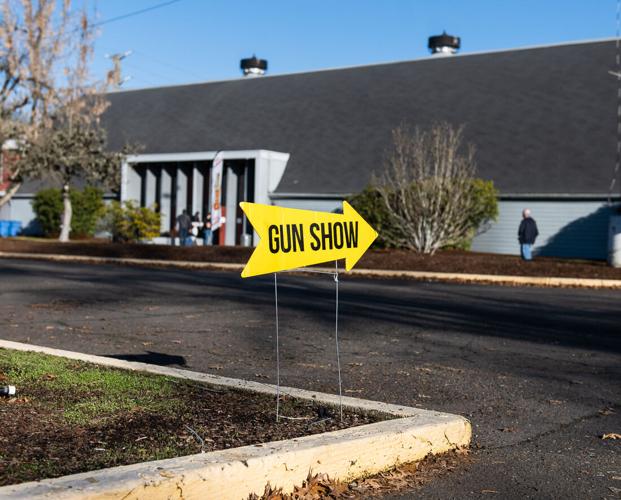 A recently-passed Oregon gun control measure is blocked following a slew of lawsuits and concerns from sheriffs, but activists are still confident the measure will succeed.

Measure 114 passed with slim margins last November and was the closest Oregon ballot measure race in 2022. Less than 25,000, or about 1.3% of the total votes, made the difference between the measure passing and not, according to election results gathered by the Oregon Secretary of State.

It requires local law enforcement agencies to develop a permit-to-purchase process for buying firearms, requires applicants to complete safety training and a criminal background check and prohibits magazines capable of holding more than 10 rounds of ammunition.

But, with the issue of funding and staffing the permit-to-purchase program falling on local law enforcement agencies, Oregon sheriffs say they are unprepared to fill the requirement. Currently, there is no state-organized funding plan for this measure, so it falls on local agencies to develop their own.

Deschutes County Sheriff and Oregon State Sheriffs' Association president Shane Nelson said one of the main reasons for the OSSA’s dissatisfaction with the measure was it will redirect resources away from protective law enforcement services toward completing background checks and issuing permits in a video on the OSSA website.

Nelson said OSSA did an in-depth analysis of the financial impact implementing Measure 114 would have on local police departments and sheriff’s offices throughout the state. OSSA estimates the implementation would cost local law enforcement agencies just over $49 million annually, with expected permit fees covering $19.5 million.

“Measure 114 will require local law enforcement agencies to create and fund a firearm permit process out of local budgets,” Nelson said in the video. “We [OSSA] have serious concerns about how this measure will adversely impact public safety in our communities around the state.”

Lane County Sheriff’s Office public information officer Tom Speldrich told the Emerald that the statement put out by the OSSA was a good representation of where the Sheriff’s Office stands at this point.

Lane County Sheriff Clifton Harrold said his office does not have the personnel or resources to provide for the permitting process as proposed by Measure 114.

After the measure was passed last November, opponents to gun restrictions were quick to file lawsuits against it. Four lawsuits were introduced in federal court and one in Harney County Circuit Court fighting the measure’s stipulations on large magazine restrictions and the permit-to-purchase clause.

A lack of personnel was cited as one of the major obstacles for implementing the permit-to-purchase clause in the lawsuits. As of 2022, Oregon has the lowest number of police officers per capita in the United States, with 284 law enforcement employees per 100,000 people, according to World Population Review.

Opponents of the measure, including Gun Owners Foundation and Gun Owners of America, filed a restraining order in a Circuit Court in Harney County to halt the implementation of the measure on Dec. 2, 2022, arguing the measure goes against Oregon’s constitutional right to bear arms.

Harney County Circuit Court Judge Robert Raschio granted the initial restraining order, citing Article 1, Sec. 27 of the Oregon Constitution, which says, “The people shall have the right to bear arms for the defence [sic] of themselves, and the State, but the Military shall be kept in strict subordination to the civil power[.]”

The ballot measure is currently blocked from taking effect due to this Harney County lawsuit.

On Dec. 23, Raschio heard arguments about whether or not the background check provision in the measure could go forward while the other portions were blocked by the court. The language of the measure specifically says that other provisions can go into effect if one is blocked.

That background check provision would close the Charleston Loophole in Oregon, which is a provision of federal law that allows gun dealers to sell guns to customers before their background checks are completed. This loophole was what allowed Dylan Roof to carry out a mass shooting in a church in Charleston, North Carolina in 2015.

Raschio denied the implementation of the provision, saying in his order that the language of the ballot is inexorably linked to the permit-to-purchase program.

“To find otherwise requires the court to ignore the operative language linking each provision on background checks to the permit-to-purchase program," he said in his order. "The court would be separating sentences at commas and considering the phrase 'permit holder' surplusage. It is not surplusage."

A full trial on the measure's constitutionality has not been scheduled yet.

In another lawsuit, U.S. District Judge Karin J. Immergut ruled against a restraining order suggested by the prosecution.

Immergut said in her ruling that the burden imposed by Measure 114 on the core U.S. Constitution’s Second Amendment right is minimal. But the federal ruling does not affect the Raschio’s ruling because his argument is based in Oregon’s Constitution.

Reverend Mark Knutson, an activist and preacher at Augustana Lutheran Church in Portland who helped pass the measure, said despite the conflicting court rulings and the stay on the implementation of Measure 114, he is not worried about its future.

“We know all four components of this law are constitutionally valid,” Knutson said. “I fully trust the implementation process, which is critical for this to be done justly and equitably.”

The Lincoln County Sheriff’s Office is one of the few Oregon police agencies planning to implement the permit-to-purchase clause of the measure, but Sheriff Curtis Landers said his office is unsure how big of a demand for permits there will be. Landers said the office anticipates a large surge initially with the pace slowing over a few months.

“We do not have additional personnel to accomplish this so it will cause delays, and we will need to prioritize our services to our citizens,” Landers said in an email to the Emerald.

Either the permit applications will slow to a manageable pace some time after the measure enacts or LCSO will determine if they need to add personnel, Landers said.

Speldrich said Lane County Sheriff’s Office has three staff assigned full-time to the Concealed Handgun Licensing and Renewals section, and the CHL section typically has 20-35 initial licensing or renewal appointments every weekday except Wednesday. Wednesdays are “walk-in” CHL renewal days, and there are typically applicants in line in the lobby all day that day, Speldrich said. There are roughly 25,000 CHL holders in Lane County currently, Speldrich said.

If someone applied for a CHL permit in December of 2022, Speldrich said, it would likely take staff until this May to process it. The rapidly increased number of applications caused by the measure would prolong that timeline even further.

Oregon is a “shall issue” state, which means law enforcement officials are required to permit to anyone who meets certain minimal statutory requirements, including having no outstanding warrants for their arrest and completing a mandatory gun safety training course.

The Oregon State Police saw an increase in background check requests in November 2022 by more than 300%, according to agency data, a response by gun purchasers to the unsure nature of the gun market after the passing of this measure, Speldrich said.

Oregon State Police Superintendent Terri Davie told members of Oregon’s Senate Judiciary Committee that the agency was finalizing temporary rules to implement Measure 114, and a form has been drafted for those wishing to voluntarily complete the permit-to-purchase process.

Lane County mountain with controversial name may be changed