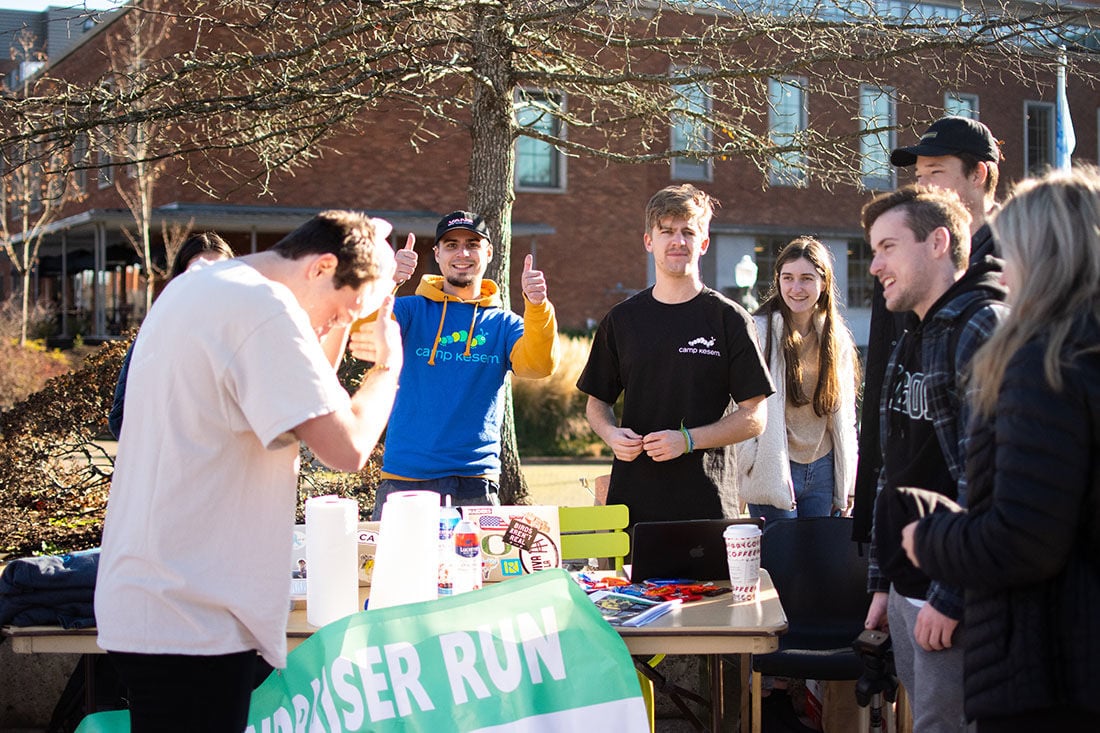 Camp Kesem volunteers organized a raffle, sold donuts and threw pies in each other’s faces to raise money for the camp next summer. (Kimberly Harris/Emerald) 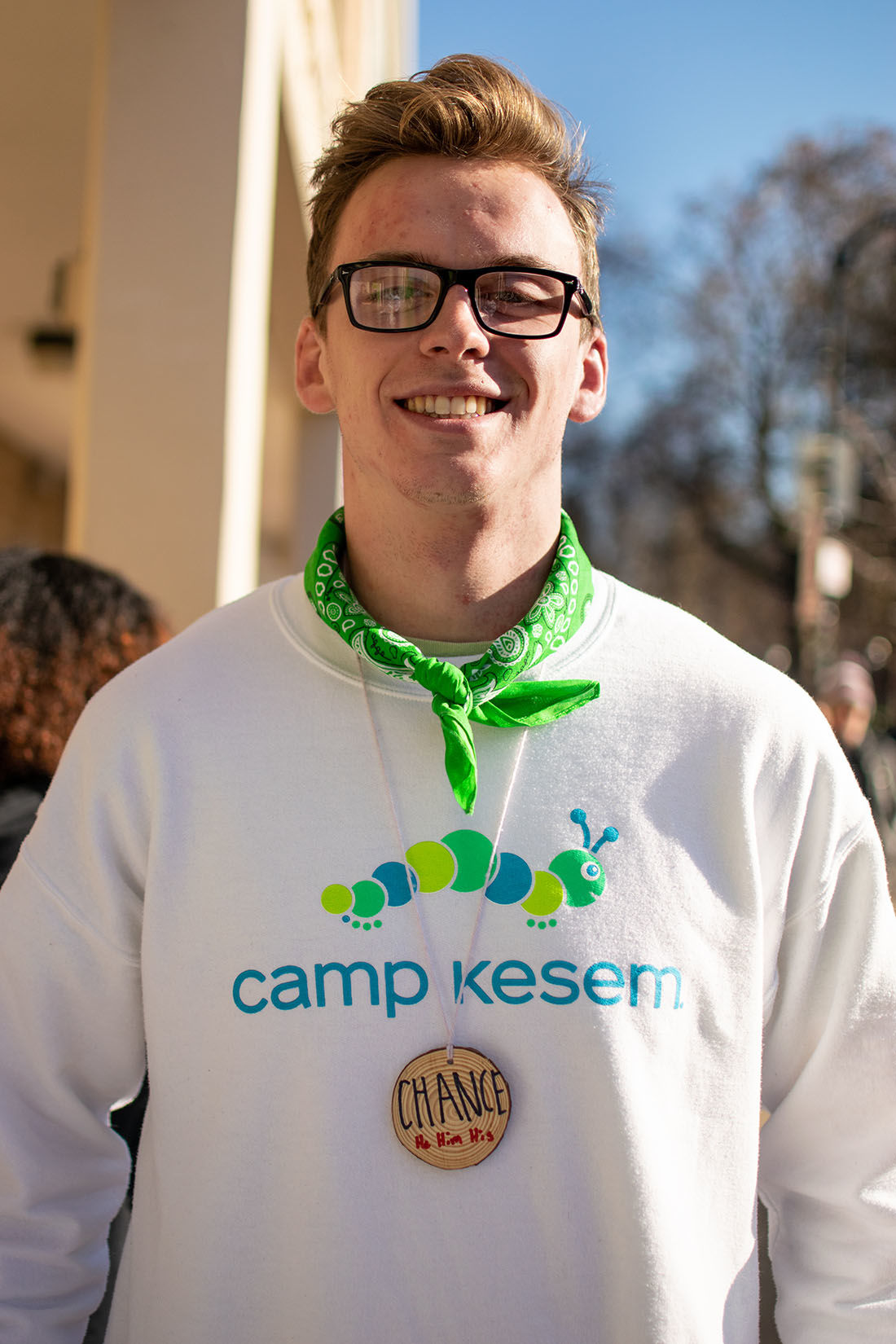 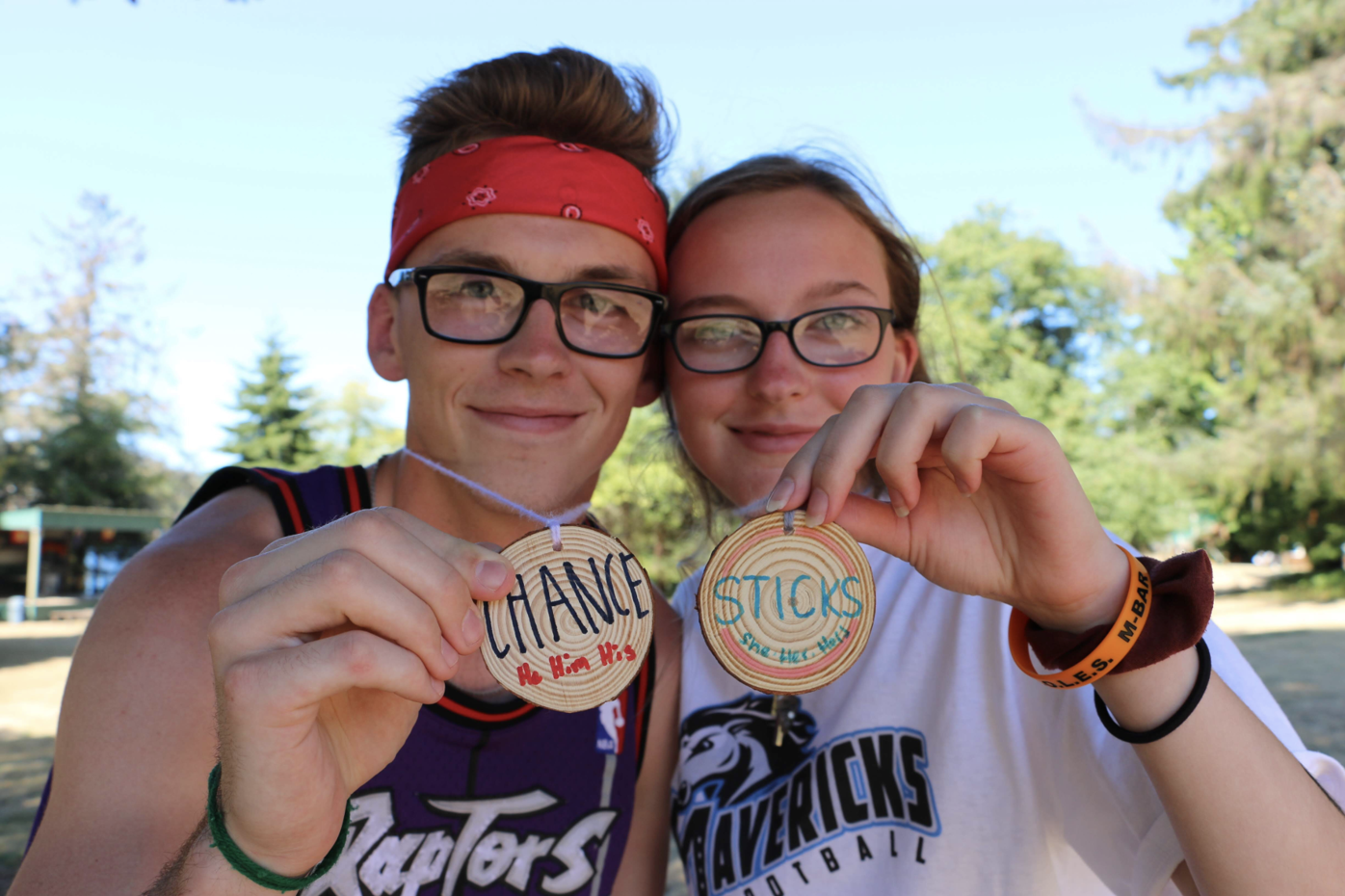 Tanner Brown, a counselor at Camp Kesem, and his sister where she was a camper. (Courtesy of Melia Dowd)

University of Oregon freshman Katie Taloff’s mother introduced her to the Texas A&M chapter of Camp Kesem after being diagnosed with cancer. Since her mother was first diagnosed while Taloff was 5 years old, she often interacted with people who had a difficult time even mentioning her illness, and she found comfort in the sense of camaraderie she felt when she joined the camp at age 13.

“Growing up with that kind of hardship at home was a very isolating situation to be in. There's not really anyone your age that you can speak to about the experiences that you're going through and how it affects you, and so being able to go to a camp literally full of people — kids and counselors — who have gone through or are currently going through the same things that I had was really incredible.

“The counselors were so amazingly trained in how to accommodate their campers in times of need,” Taloff added. “Even looking back at it now as an adult, I don't know how a bunch of college-age students would be able to have the maturity and the capacity to walk a child through their parent’s death in such a mature and responsive manner.”

Student volunteers from Camp Kesem’s University of Oregon chapter, which was first established in 2011, raised $37,000 at the group's annual Giving Tuesday fundraiser on Tuesday. The donations from this year exceeded the $30,000 goal, as well as the $25,000 it raised last year. With 116 chapters in 42 states, Camp Kesem’s mission is to support children “through and beyond their parent’s cancer.”

According to its website, Kesem is a “community” of students dedicated to helping children who have been affected by a parent’s cancer diagnosis, and it is the largest national program that caters to that demographic. As Kesem's “flagship program,” Camp Kesem has chapters in universities nationwide, each of which offers two free week-long camps every summer.

“All of that money goes towards reserving the campsite, paying for camp supplies like buses,” said Matt Peterson, the UO chapter’s development coordinator. “With the amount of money we raised on Tuesday alone, we could send 75 kids to camp for free.”

Aside from the bake sale, T-shirts, raffles and pie-ing, a major source of Giving Tuesday donations came from the Power Hour, in which volunteers spent an hour contacting former donors, friends and family about contributing to Camp Kesem.

Kesem’s website says that its funding model has allowed the program to grow quickly. It serves 10 times the number of children it did a decade ago, with nearly 9,000 campers in 2018.

“What I think is really special about Camp Kesem is when you donate to us, you become like part of the Kesem family,” junior director Maddie Newman said. “You are on the Kesem newsletter, so you get to see what the chapter is up to, and you always feel like you're a part of it, whether you're in New Jersey, Texas, or California or here on campus.”

Newman joined Camp Kesem after hearing about it from her aunt, who had cancer at the time. She said seeing the support for her aunt from their community helped her understand what the campers were going through and made her want to “give back.”

“Oftentimes, in the case of an adult's cancer, the kids are often asked to go watch movies so the adults can talk and have those hard conversations,” Newman said. “So I wanted to be part of Kesem to give the kids the experience that they deserve and the chance to be a kid for a week.”

Peterson described the majority of the summer camp as just like any other, but the "Cabin Chats” that conclude each day start out light, and over the course of the week, delve into “deeper questions about Kesem and what it means to them.” With campers’ ages ranging from 6 to 18, Peterson believes that Kesem counselors must be “adaptive” to their individual needs.

“Once they really get to know each other and feel comfortable sharing, that's when we kind of try to allow them to share whatever they want or don't want to share,” Peterson said. “We're pretty strict on the fact that we're not psychologists or doctors, we're there to support them. So I'd say our actions and what we say to them is all just in response to what they do and say to us.”

Eighty percent of Camp Kesem counselors “have been impacted by cancer,” its website says. As a new counselor and former camper at Camp Kesem, Taloff sympathizes with campers that initially enter the program with a sense of apprehension. “I was new to the entire situation, so there was definitely some nerves about that,” she said. “I didn't really know much about it prior to actually being in the camp.”

Connor Daley, who has spent three years as a Kesem counselor, said Through and Beyond is meant to support campers outside of the week they spend at Kesem, including by sending birthday cards and holding several “Friends and Family Day” gatherings throughout the year. Daley remembered an instance when a group of counselors attended a memorial service for a camper’s parent. “The campers actually decided to sit with the counselors instead of their family,” he said. “That was pretty impactful.”

Daley read one recent letter he received from a former camper, which read: “Slinky,” Daley’s camp name, “I've never met someone who can take any moment of any day and fall in love with it so much. Thank you so much for coming to camp and being the amazing person that you are. I love you.”

Tanner Brown joined Camp Kesem with his sister this past summer — he was a counselor and she went as a camper. Their mother passed away last September and Brown said he had “a huge hole” in his heart, but that Kesem “filled it with love and magic” and brought him and his sister closer together. At one of the summer camp’s dance parties, Brown said she told him, “Thank you for bringing me here, I never want to leave.”

“That was one of the most beautiful moments of my life,” he said.

Brown described a camp activity called “Empowerment,” in which campers speak as a group about how Kesem empowers them. “My second week of camp, I did it with smaller kids,” he said. “They're just talking about how much they love it there and how they never want to go, and I started crying and the little girl next to me, she grabs my hands, she’s like, “Hey, it's okay.” And oh my God, that got me.

Brown said seeing a transformation in campers who initially did not want to be there is among his favorite memories from Kesem. “I had two campers in my unit who showed up for the first time, and they didn't want to share, they didn't want to really talk to anybody, they weren't really that interested in the camp, he said. “But by the end, huge smiles on their faces, dancing their hearts out — they did not want to go.” One of them, he said, told him, “Thank you for teaching me that it’s always okay to never stop dancing.”

Taloff’s mother passed away shortly after she left the summer camp. She recalled finding out during camp that her mom was being transported to hospice and deciding to leave early.

“It was the camp counselors who drove me home from camp to go visit my mom in hospice,” she said. “The morning that I was going to be leaving, they gave me a notebook that all of the counselors in the camp and all of the campers in my cabin had written me, like page-length letters in the notebook basically wishing me the best of luck, saying they were sorry about my mom, reminiscing on the positive impact that I had made in their lives and that they had hoped they made in mine.”

Taloff also said that her counselors surprised her by driving two hours to Austin, Texas, for her mother’s memorial service. According to Peterson, Kesem has done this in the past as part of its plan to provide “through and beyond care” for the campers.

The UO Camp Kesem chapter will hold its annual fundraising gala Make the Magic in Portland on May 9. It is also planning a spring CK5K marathon fundraiser in honor of Chris Crawford, an advisory board member who died of cancer last year, but an official date has not yet been determined.

Readers can learn more about Camp Kesem or donate to the camp on its website.