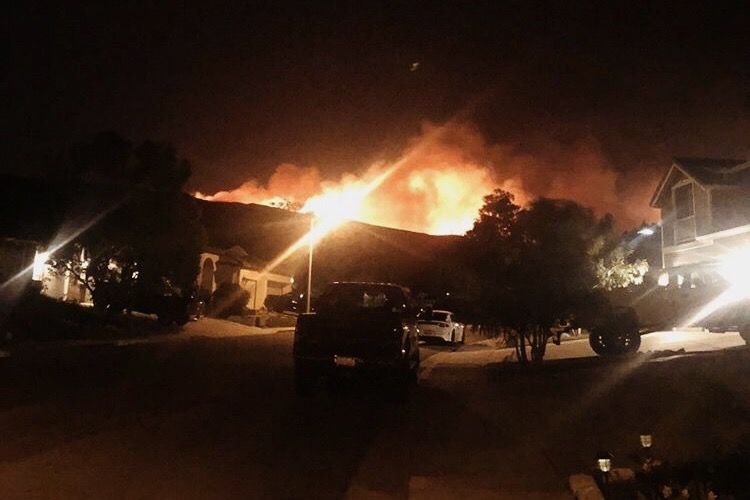 The Woolsey fire in Southern California as seen from a driveway in a Simi Valley, Calif., neighborhood. (Courtesy of Joey Richesson) 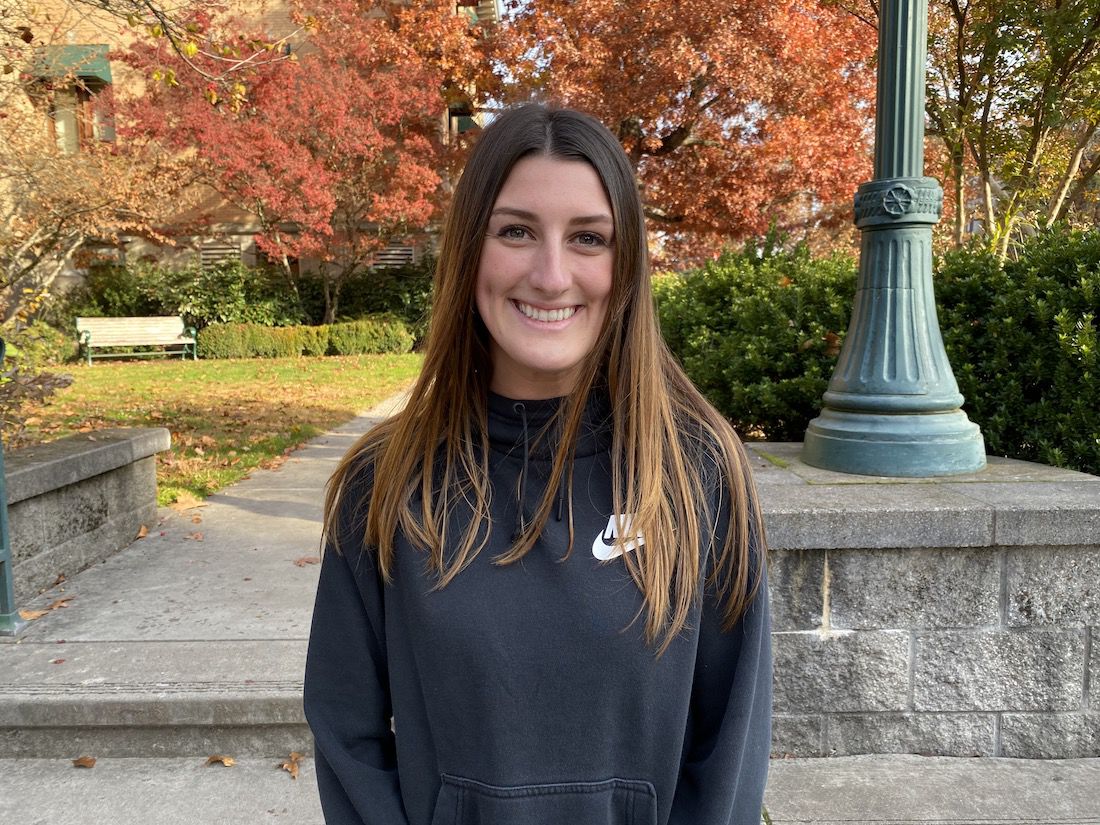 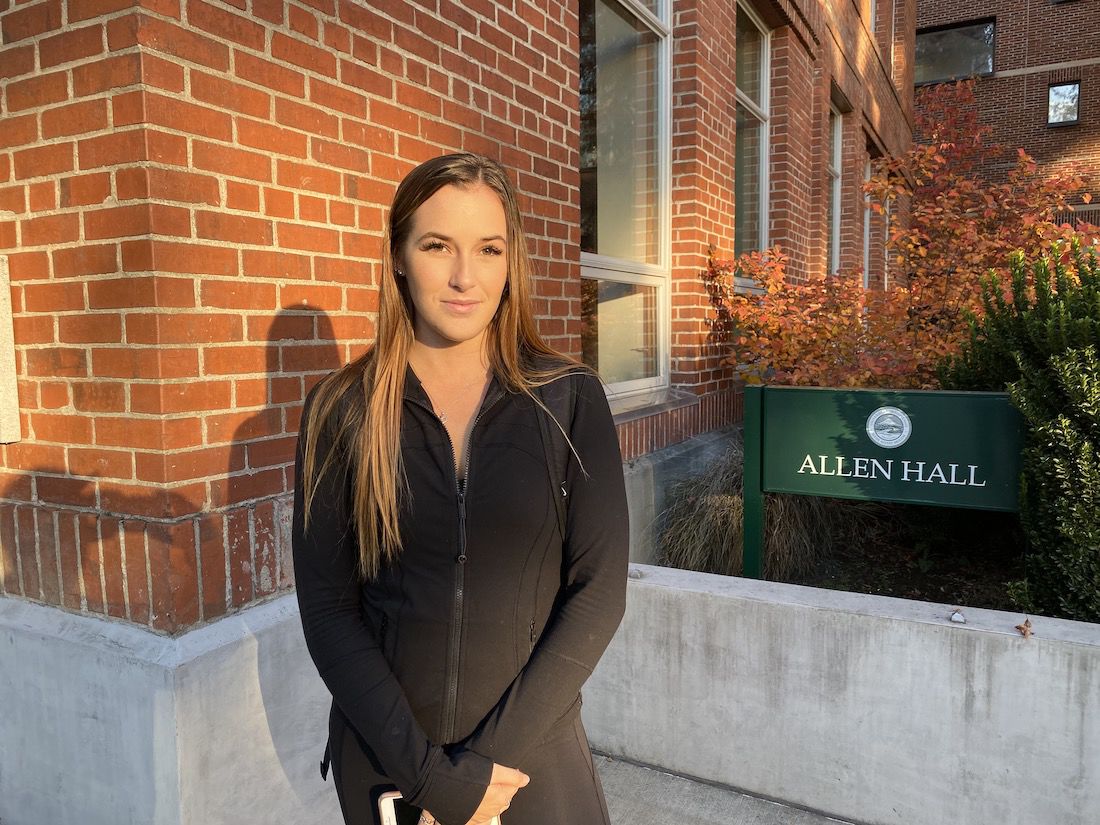 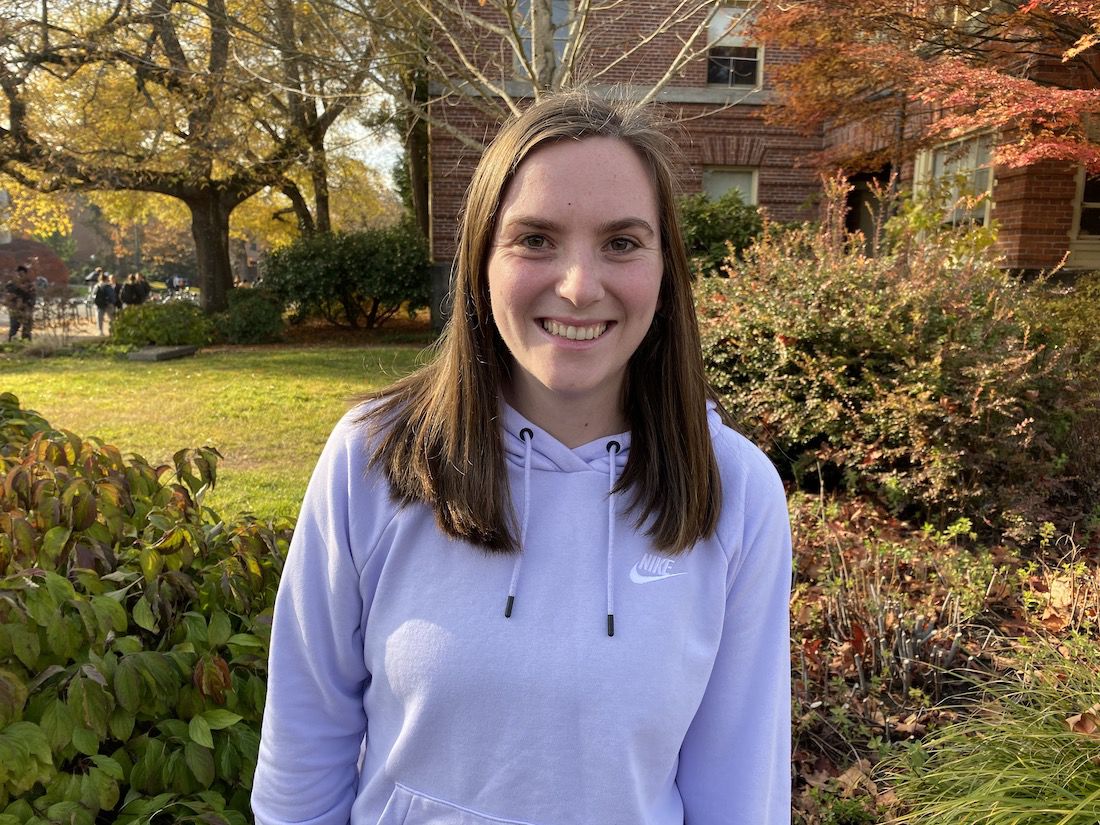 The recent wildfires in California have forced hundreds of thousands of people out of their homes. While most University of Oregon students prepared for midterms, many of the thousands from California wondered what the impact would be on their homes or families.

The fires first started in Northern California before making their way down to Southern parts of the state, according to The San Francisco Chronicle’s Fire Tracker.

“It’s super disheartening just seeing how much is being burned and how fast it’s being burned,” said Megan Bertolone, a senior from Santa Rosa, California. After the fires quickly escalated, Bertolone said she spent much of her time following their paths on social media and checking in with her family back home. “I think that's the hardest thing, because my family sees it firsthand. I don’t have to see it as much, but seeing the videos makes you sad and it definitely makes your stomach hurt a little bit, knowing that’s where you grew up and it’s up in flames.”

Bertolone said she largely relied on a text-messaging service called Nixle Alerts for updates on how close the fires were to her area. “If I see something related to Santa Rosa, I call [my family] immediately,” Bertolone said.

Around 180,000 people had to leave their homes due to mandatory evacuations as of Oct. 28, California Governor Gavin Newsom said at a press conference.

Bertolone, who had no choice but to try to study for midterms while her family was being evacuated, admitted it was a challenge to “get up and go to the library when you just want to sit in your room and watch what's going on.”

Lisette Bourdeaux, a junior at UO, said her mother stayed at a friend’s house after being evacuated from their home in Sebastopol, California. “Obviously if I went back, it wouldn’t help, like I couldn’t do anything,” Bourdeaux said. “But in a way, I wanted to help with animals, with whatever, just to have the security of me being able to do something for the people that I care about.”

Representatives of Pacific Gas and Electric said the company's own damaged equipment might be to blame for starting the fires, and it has since shut down power for around three million Californians, according to The New York Times.

Bordeaux’s home was one of the millions that had its power shut off — her family was without power for four to five days. She said the extent of the shutdowns were “unnecessary” and “a bit dramatic” and said she felt PG&E was being overcautious in light of the recent controversy.

Adrienne Harrison, a senior from Windsor, California, said her parents had a difficult time working because most of their business is online and both their house and office were cut off from power.

Tyee Burwell, a retired wildland firefighter in Lane County, said he does not blame PG&E for shutting off power to certain homes. “I think that it’s probably smart,” he said. “In a high wind event situation with above-ground wires where they’re around trees that could fall on them, it would make sense to do a partial shutdown.”

Still, Cassandra Moseley, an expert in natural resource policy at UO, thinks there needs to be more effort toward emergency preparedness before shutdowns becomes a standard routine.

“It’s a rushed solution in the short term for sure, and we have a lot more planning to do,” Moseley said. “I think the other issue that I worry about is that people go seek gas generators, which under dry conditions, can be a source of fire themselves, so I wouldn't want to have one source of fire replace another source of fire.”

A lifelong California native, Bordeaux has never seen anything like the wildfires that have overwhelmed the state in the past two years. Dr. Bart Johnson, a UO professor and expert in landscape architecture, said that “the systems that we’ve relied on for a long time that were adequate under past climate and weather conditions and risk” are no longer enough.

“There are all these things that have come together — increasing population, numbers of people in areas of fuels, more fuels on the ground, more extreme climate — and it’s just a recipe for disaster,” Johnson said.

The National Science Foundation recently offered Johnson a grant to lead a team of students that will spend four years conducting research on reducing the risk of wildfires. He hopes to educate as many people as possible through what he calls “reverse-mentoring,” which encourages collaborative work that gives the students the tools to go back and educate their own communities.

How have UO students managed to deal with the wildfires?

Living through this experience, as well as the string of wildfires in 2017, was eye-opening for Harrison. “I texted and talked to so many different people that I haven't talked to in probably two or three years just because everyone is so sensitive from last time,” Harrison said.

For Bertolone, her only other source of comfort besides her family’s safety was other students that knew what she was going through. She was at a school football game when she received a Nixle Alert that said the fires were headed toward her neighborhood.

Bertolone recalled feeling like the only sad person in the stadium until she ran into Harrison, who went to the same high school as her and was dealing with the same emotions. “I think it brings people together,” she said. “That was the one good part, just being like, ‘Someone I know that knows exactly what's happening.’”

Dr. Jimmy Howard, the UO assistant dean of students for prevention and response, said he wants students who are affected by the wildfires to know that the school has resources available for them. “We carry the stories of our students a lot, so it's painful to see people watch and feel like they're separated and that there's nothing they can do,” Howard said. “Sometimes, folks feel like they’re alone or feel like there's no one there to help, but that's what especially the Dean of Students’ office is here for.”

The UO Counselling Center offers one-on-one sessions specifically for crisis support, and students that need financial support can apply for it through the Student Crisis Fund.

A photo of Adrienne Harrison was mislabeled in a previous version of this story. It has been updated to reflect the correct information.