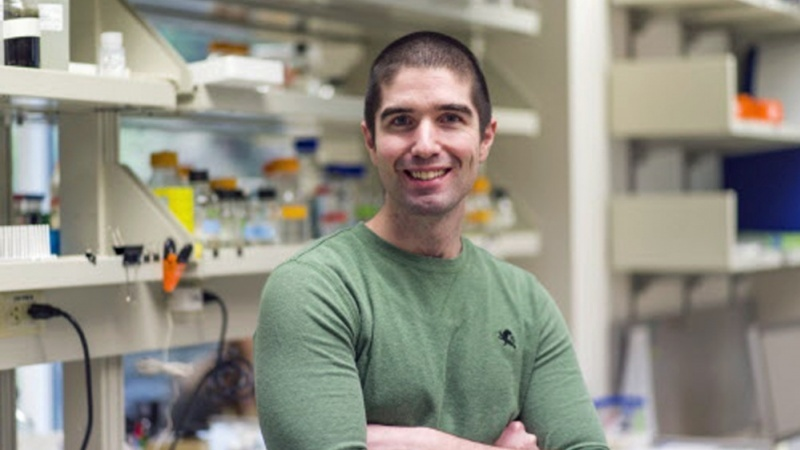 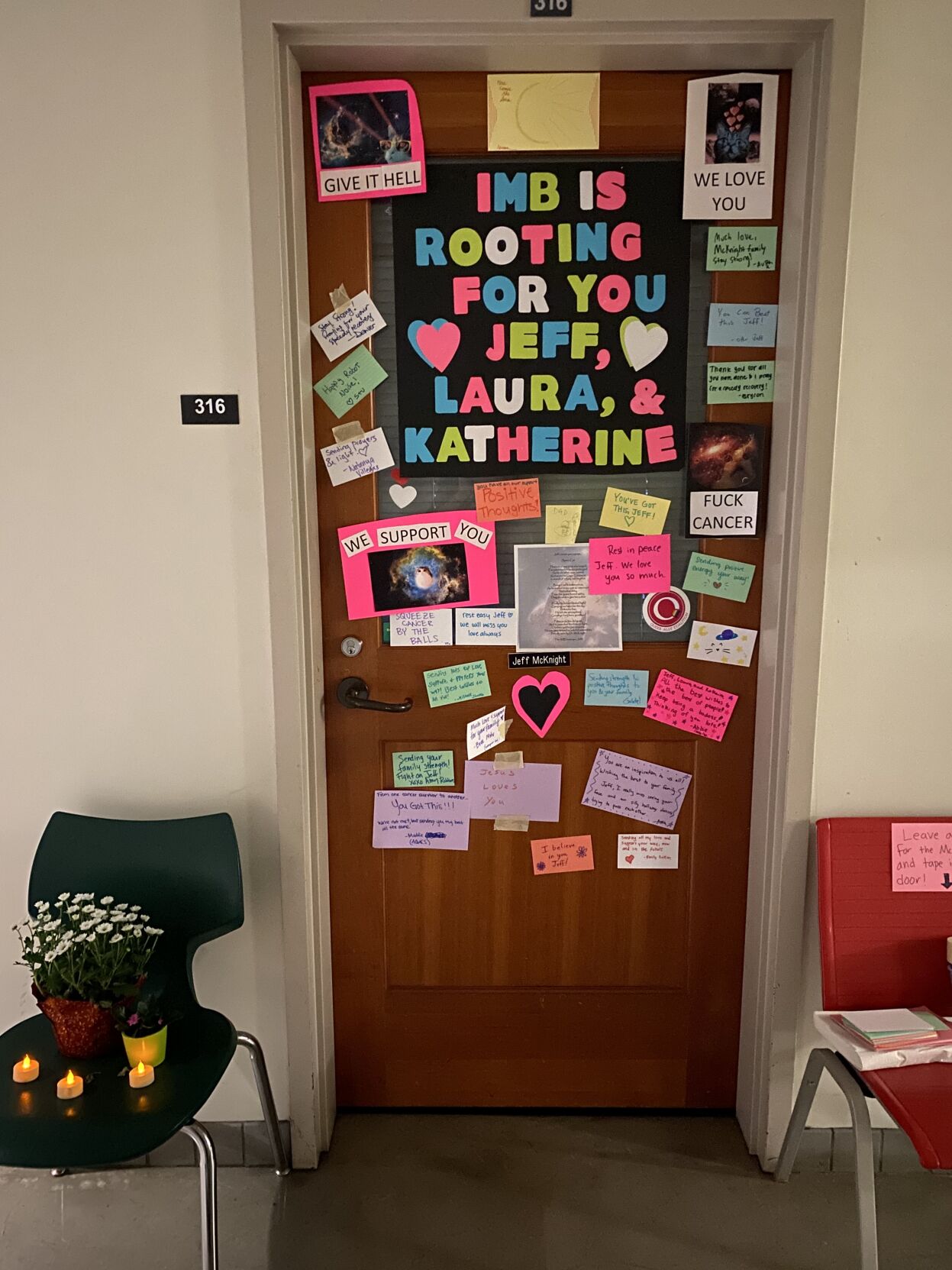 Jeff McKnight's coworkers and students decorated his door with supportive messages as he battled lymphoma. (Courtesy of Amy Robbins) 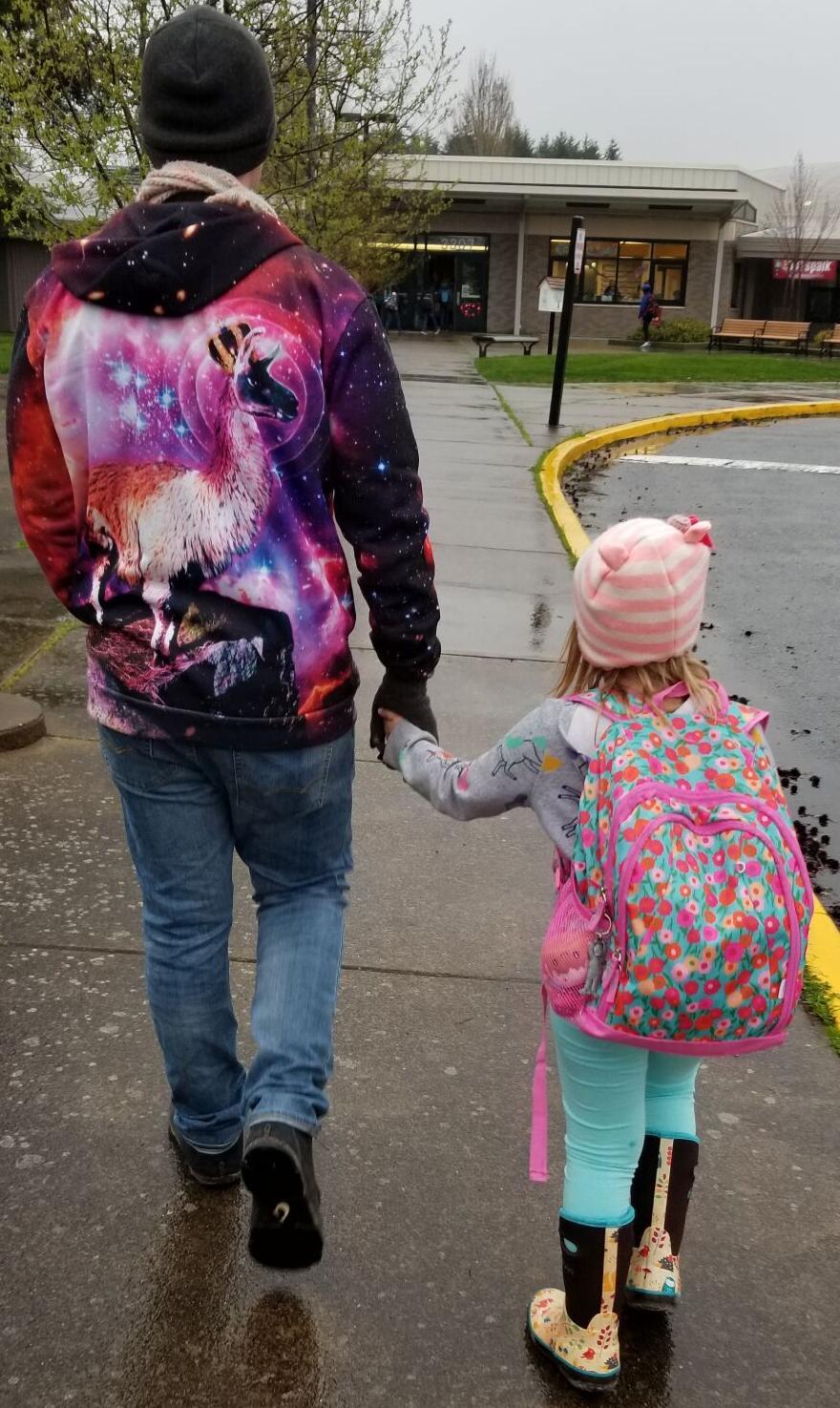 Jeff McKnight and his 8-year-old daughter on a walk. (Courtesy of Laura McKnight)

University of Oregon Assistant Biology Professor Jeff McKnight had a keen sense of fashion, often sporting beanies and colorful sweaters. His most memorable attire was his galaxy-print hoodies, emblazoned with llamas, cats and panda bears. Sometimes, he would pin his daughter’s artwork to his shirts.

Scott Hansen, assistant chemistry and biochemistry professor, said his wife asked McKnight to pick out some yarn so she could knit him a scarf. He chose a multicolored yarn with pinks, blues, greens and oranges.

“It looked like something out of a candy shop,” Hansen said. “He would wear that all the time, and it totally matched his sweaters.”

McKnight died Oct. 4 of lymphoma after celebrating his daughter’s eighth birthday. He was diagnosed with the rare blood cancer in March.

McKnight specialized in manipulating the structure of chromatin, a material cells use to control which genes are turned on and off. His colleagues and students miss the playfulness he brought to the scientific community.

“Scientists want to maintain some level of professionalism and oftentimes don’t want to put themselves in positions that make them vulnerable,” Hansen said. “Jeff was able to elegantly act silly but also be professional.”

McKnight had a monthly subscription to Universal Yums, a company that delivers snack foods from around the world. McKnight encouraged his colleagues to try the snacks — “some of which were delicious and others which were not” — and enjoyed their reactions to them, said David Garcia, assistant biology professor.

His food-sharing practices didn’t stop with his colleagues, as he hosted spicy ramen challenges, during which he tested his lab students’ spice tolerance with Samyang 2X spicy noodles.

“Our lab was like a family,” doctoral candidate of molecular biology Kona Orlandi said, noting that McKnight’s wife, Laura, managed the lab. One could find their daughter, Katherine, coloring under McKnight’s desk when she had a day off of school.

Students who worked with McKnight in his lab reflected on their experiences fondly, noting the googly eyes plastered to every piece of lab equipment. McKnight often rode his scooter around the lab and the science building’s halls and encouraged students to play with his fidget spinners.

“Jeff was definitely someone special who saw his students as equals and not as anything lesser,” said Bryson Tyler Ricamona, a UO biology alum. “It was really enlightening and very motivating to know that somebody really believed in us, not only in the work that we’re doing now but the potential work that we could do in the future.”

“He cared very much about our community,” Orlandi said.

McKnight loved science and was always enthusiastic during scientific discussions with his colleagues. Last winter, he learned how to extract chromatin structures from fungi. Excited about his findings, he began collecting mushrooms, picking them from the ground and purchasing them from the grocery store.

“He burst into my office one day, waving a bunch of mushrooms, saying ‘It works!’” said Mike Harms, an associate biochemistry professor. “Every time you walked into the lab, there would be mushrooms everywhere.”

Biology Department Head Bruce Bowerman said he admired McKnight for his scientific accomplishments and compassion. “He went out of his way on a regular basis to reach out to individuals who were struggling in various ways and helped them navigate their challenges,” Bowerman wrote in an email.

To honor the compassion McKnight showed his students, the Institute of Molecular Biology established the Jeff McKnight Memorial Fund, which “will be used to recognize and support graduate students demonstrating resilience in the face of challenge,” according to the IMB website.

Claire is a news reporter for the Daily Emerald. Send her news tips at cwarner@dailyemerald.com