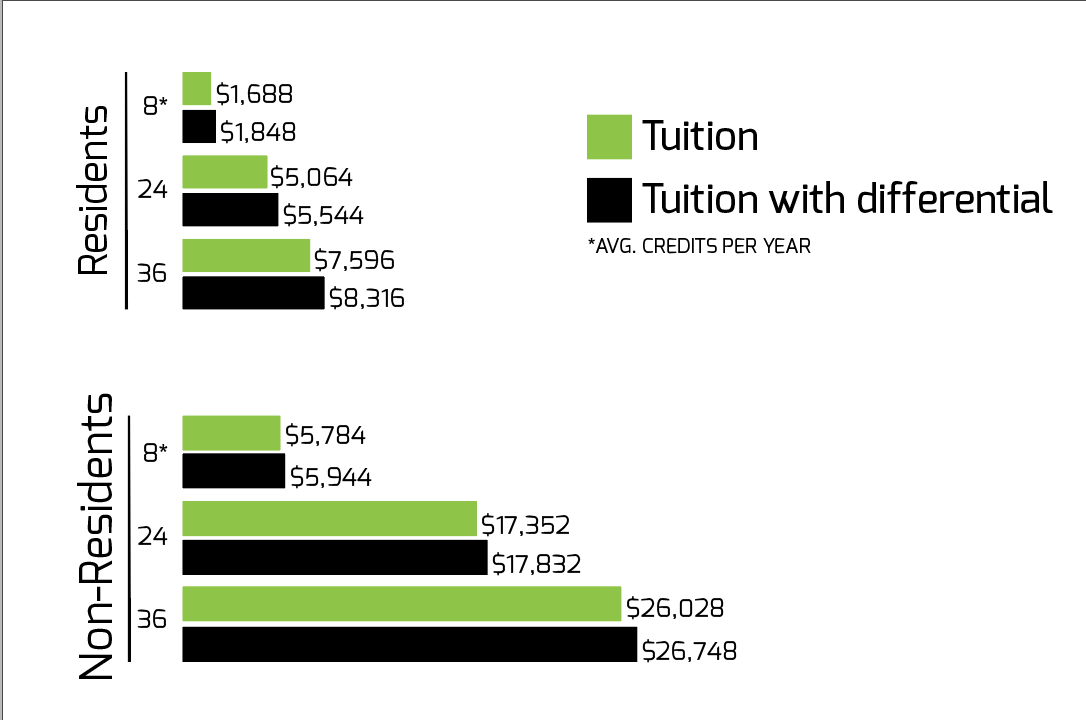 The Lundquist College of Business needs a financial boost, and it could be coming straight out of business students’ pockets.

The college has proposed a “differential tuition” for its classes — meaning students who take courses offered by Lundquist College will be charged $20 more per credit hour, on top of regular tuition. That amounts to an extra $720 per year for majors taking 36 business credits.

Until now, the business school’s extra services and faculty costs have been spread throughout the undergraduate population’s tuition rate — but it hasn’t been enough.

Proponents of the Lundquist College proposal say the tuition increase is necessary to meet accreditation and competitor standards and will ultimately benefit business students. A 2016 review from the college’s accrediting body revealed only 48 tenure faculty for its 5,000 students — “much too low” for a research-oriented business college.

Dean Sarah Nutter said the college will bolster its faculty and its student services with the estimated $1.4 million revenue boost.

“We have some gaps — and they’re pretty big gaps,” said Nutter.

According to the proposal, there’s a ratio of 799 students to just one career services staffer in the college. Nutter said business students expect top-notch career advising, tutoring and internship opportunities — and to keep the college competitive among similar universities, UO has to bridge the gaps.

But some members of the Tuition and Fee Advisory Board raised questions and concerns about the proposal’s larger implications for UO at their meeting on Jan. 12.

She sits on TFAB, a group of 16 different administrators, deans, educators and student representatives who make an annual tuition rate recommendation to UO Provost Jayanth Banavar and President Michael Schill.

Schenk also attends the expensive Clark Honors College. “Without scholarships, I would not be able to be there at all,” she said.

It’s the only other college at UO using a differential tuition for undergraduates. It charges students an additional $4,000 per year.

At the meeting, Schenk said a differential tuition at Lundquist could discourage potential business students from exploring the major by taking a business class.

“What sets our university apart is that accessibility to all the different schools,” said Schenk.

She also worries the tuition increase could reduce the number of low-income students in Lundquist College.

“The honors college has a huge problem with diversity, and I don’t want more students priced out — specifically students of color — priced out of the business school with a differential increase,” said Schenk.

The proposal includes a small financial buffer for current students — 10 percent of the extra revenue will be set aside during the first year to help continuing students with financial need. In 2020, 5 percent will be held for low-income students. After that, new and continuing students will pay the full price. PathwayOregon students, whose tuition is already covered by the scholarship, will not be affected.

This is not the first time UO has seen a differential tuition proposal from a college — it was deliberated in a university-wide discussion eight years ago.

Brad Shelton, executive vice provost for academic operations, said the discussion culminated in a meeting with former UO President Richard Lariviere and most of UO’s academic and administrative leadership.

“One of the things that seemed to be important to a lot of people was the idea that we try to be a university where we basically treated everybody the same way, and we didn’t put students into a position where they were choosing their major based on cost,” said Shelton.

Lariviere nixed the differential tuition then, but Shelton said he may have just been kicking the can down the road.

“It was us swimming against the tide, because most universities do have differential tuition. Where you usually see it is in two programs — business and engineering,” said Shelton.

Oregon State University has a similar differential for its business school at $20 per credit hour.

This is the second iteration of the school’s differential tuition proposal — one was introduced last year, as a block charge to all business majors. Administrators consulted with some leaders of business college-affiliated student groups and made changes.

“There was a strong sense from the students that a per-credit approach was much more fair,” said Nutter.

Nutter says differential tuition is a necessary change for the future of the college.

“How do we create an environment where students succeed? And not only that they can succeed — but that they’re career ready when they leave?” said Nutter. “That’s absolutely essential for business school students.”

Most of the college’s budget — 90 percent — goes towards faculty, staff and student services. At $226,700, an average professor’s salary at Lundquist College is more than twice what many UO professors in other fields of study make. Shelton said it’s the market value of business school tenure positions and is necessary to attract talent.

Christoph Lindner, dean of the College of Design, vocalized support for the proposal at the TFAB meeting but called for a larger community discussion or committee to review the long-term implications of differential tuition.

“It is opening this philosophical question,” Lindner said. “How far do we take the principle of differential tuition, and are we going to do it case by case as each [college] maybe feels confident enough, or desperate enough to have to propose this? Or do we have some principles guiding this conversation as we move forward?”